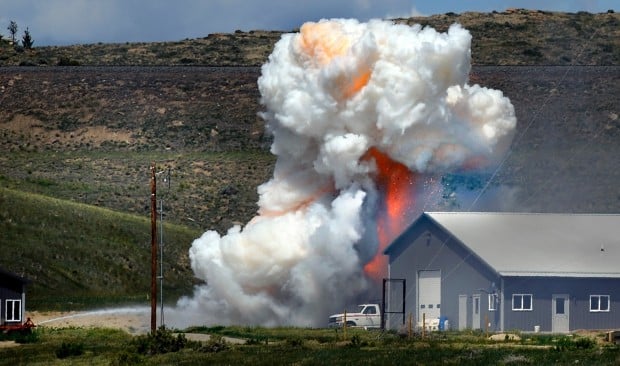 A secondary explosion rips through a pyrotechnics facility early Tuesday afternoon after an earlier explosion started the building on fire at 7788 Highway 3. Firefighters from Shepherd, Billings and Worden responded. 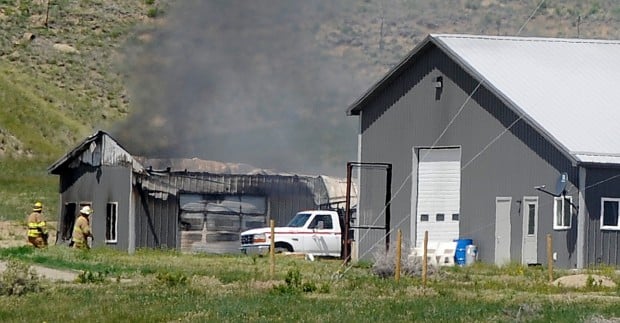 Firefighters walk to a building after a secondary explosion ripped through the pyrotechnics facility early Tuesday afternoon. An earlier explosion started the building on fire at 7788 Highway 3. Firefighters from Billings, Shepherd and Lockwood responded.

A pair of explosions tore through a building at a fireworks facility south of Acton on Tuesday morning, keeping fire crews from around Yellowstone County busy for much of the day.

The first explosion at Evolution Pyrotechnics Manufacturing Inc., at 7788 Highway 3 North, happened at about 10:40 a.m. Employees reported that it caused the building to begin smoldering.

The plant includes at least four separate buildings and manufactures fireworks used in the entertainment industry, not the kind found at Fourth of July roadside stands, according to chief executive and president Anthony Santore Jr.

Sgt. Roger Bodine, with the Yellowstone County Sheriff’s Office, said that it appears the initial blast started “after something was mixed wrong” in the facility and ignited, causing what appeared to be a small explosion.

Everyone – five to 10 people work at the facility – got out safely, although a technician suffered minor burns, was checked out at Billings hospital and is OK, Santore said.

Crews from the Shepherd and Worden volunteer fire departments and the Billings Fire Department arrived a short time later, after sheriff’s deputies had secured the scene.

Fire crews kept a safe distance from the building, aware that it contained explosive materials, while figuring out how to attack the fire.

About noon, shortly after crews began spraying the sides and a roof sagging from heat damage, the building exploded. A bright flash and fireball engulfed the building, followed by a solid, deep boom and a huge plume of smoke that rose more than 100 feet into the air before spreading out to the east.

Smoke continued to pour out of the building until at least 1:30 p.m.

Employees, sheriff’s deputies and fire responders stayed a safe distance away, aware of the chemicals and explosives involved when the composites in the building ignited, Santore said.

“The composites burned rapidly and spread through the area,” he said.

The resulting explosion blew off the roof panels, which is how the building was designed.

“The roof releases all of the pressure and therefore the structure is still standing,” he said.

The exact cause of the fire and explosion in the chemical process building isn’t known yet.

“Most importantly, everybody is safe,” Santore said. “Right now I’m just trying to provide the fire departments with any information I can.”

Billings Fire Chief Paul Dextras said that no emergency responders were injured in the explosion thanks to the wide berth they gave the building. He referred further questions about the fire and explosions to the Shepherd Volunteer Fire Department.

Shepherd fire officials remained at the site as of 2 p.m. and weren’t available for comment.

Evolution Pyrotechnics Manufacturing was registered to do business in Montana nearly two years ago and built the facility one mile south of Acton.

When asked why he chose Montana for a manufacturing plant, Santore said he isn’t sure.

“Everything is shipped via common carrier. It doesn’t matter where you manufacture,” he said. “Montana is a beautiful state.”

Santore said he has more than two decades of experience in fireworks manufacturing and travels between Billings and Fort Lauderdale. He also operates other U.S. manufacturing facilities.

But mixing pyrotechnics can be dangerous.

On June 20, two people were killed near Montreal, Quebec, when an explosion destroyed a fireworks warehouse. After the explosion at BEM Fireworks, a fire shut down a nearby highway and caused evacuations of homes and a campground.

And during San Diego’s Fourth of July celebration last year, a midnight fireworks display off some barges malfunctioned, lighting off all the fireworks in a single spectacular 15-second explosion.

Hundreds of thousands of spectators had waited hours to see the Big Bay Boom show by Garden State Fireworks, a fireworks display that was supposed to last 18 minutes. Garden State, an international pyrotechnics company started in 1890, also is owned by the Santore family.

A pickup truck belonging to a Great Falls woman who has been missing for nearly three years was found in the Missouri River with a body inside it last week, Cascade County Sheriff Jesse Slaughter said.

Interviews and court records provide a glimpse into the lives of those involved, and how two 20-somethings pulled away from a stable life and wound up at the center of a deadly crime spree.

“This is an effort, led by the highest office in the nation, to replace neutrality in teaching with slanted propaganda," said Superintendent of Public Instruction Elsie Arntzen.

The Montana Department of Corrections is searching for an escapee from the Montana Women’s Prison in Billings.

In its Tuesday ruling, a federal judge stated Randall Menges’ requirement to register as a sex offender is unconstitutional. The Attorney General's office is appealing the ruling.

The bill triples the penalties for trespassing and increases penalties for conspiracy ten-fold when those crimes are associated with protests at infrastructure projects like oil pipelines.

The superintendent of Yellowstone National Park on Thursday outlined efforts being made to replace and improve outdated housing for employees,…

Two men on bicycles were rescued after being trapped behind an avalanche near Triple Arches on Going-to-the-Sun Road in Glacier National Park Thursday, authorities said Friday. No injuries were reported.

A secondary explosion rips through a pyrotechnics facility early Tuesday afternoon after an earlier explosion started the building on fire at 7788 Highway 3. Firefighters from Shepherd, Billings and Worden responded.

Firefighters walk to a building after a secondary explosion ripped through the pyrotechnics facility early Tuesday afternoon. An earlier explosion started the building on fire at 7788 Highway 3. Firefighters from Billings, Shepherd and Lockwood responded.