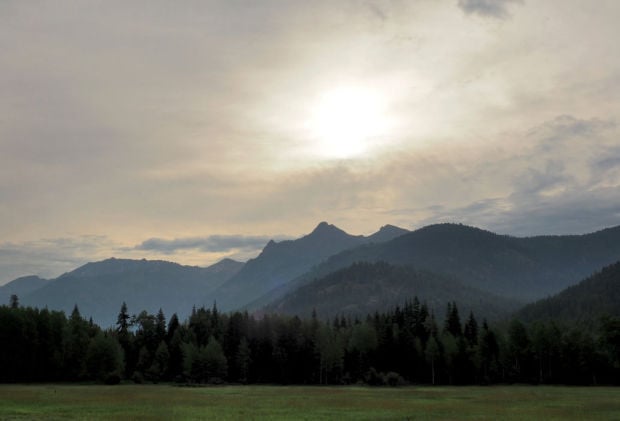 The Cabinet Mountains south of Libby are the site of the proposed Montanore Mine. 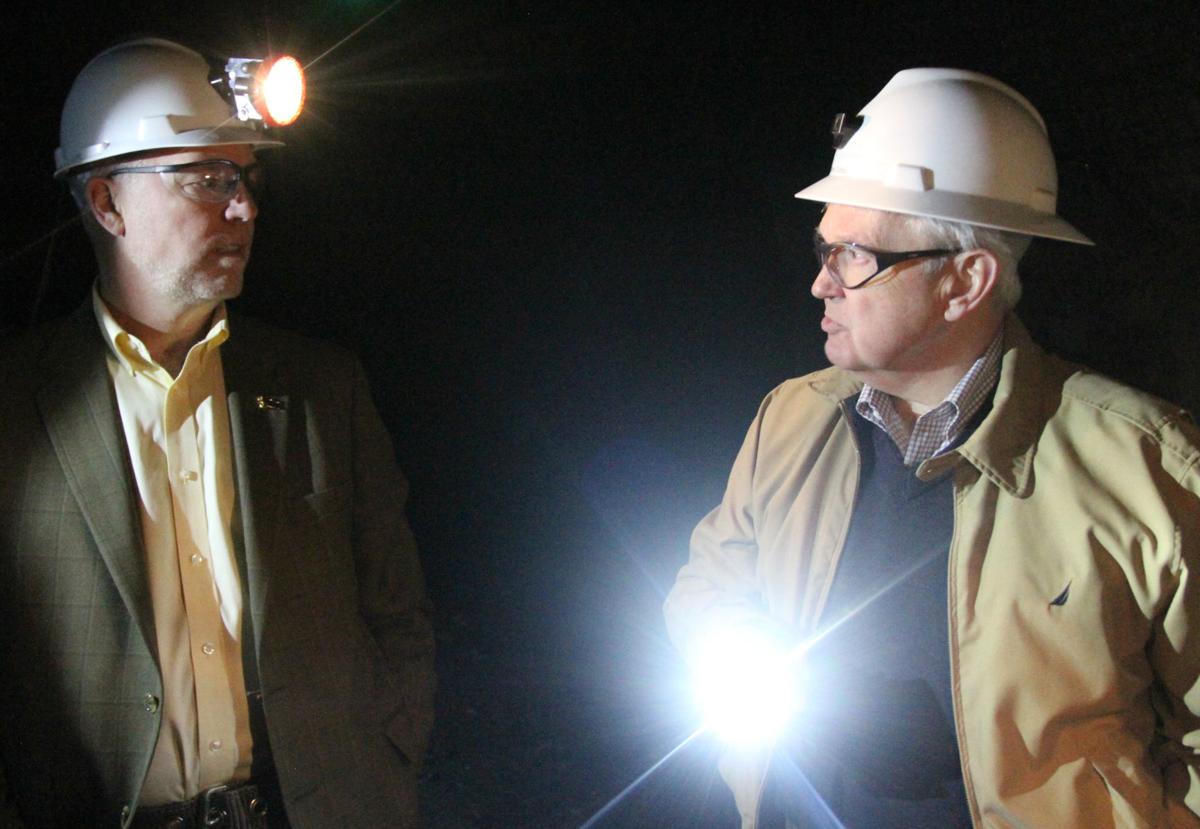 Glenn Dobbs, CEO of Spokane-based Mines Management, discusses Montana's regulatory climate with then-Republican gubernatorial candidate Greg Gianforte, left, during a tour of the Montanore Mine in this 2016 file photo.

Montana illegally re-issued a water pollution discharge permit in 2004 for the proposed Montanore copper and silver mine under the Cabinet Mountains, according to a legal ruling that environmental groups are calling “a big win” in the fight to prohibit development of the controversial mine in northwestern Montana.

In her July 24 ruling, District Court Judge Kathy Seeley wrote that the Montana Department of Environmental Quality’s (DEQ) re-issuance of the discharge permit to Hecla Mining Company and its subsidiary Montanore Minerals Corp. was based in part “on arbitrary and capricious decisions,” and violates the federal Clean Water Act and the Montana Water Quality Act. She vacated the permit, and remanded the matter to DEQ for further action consistent with her decision. 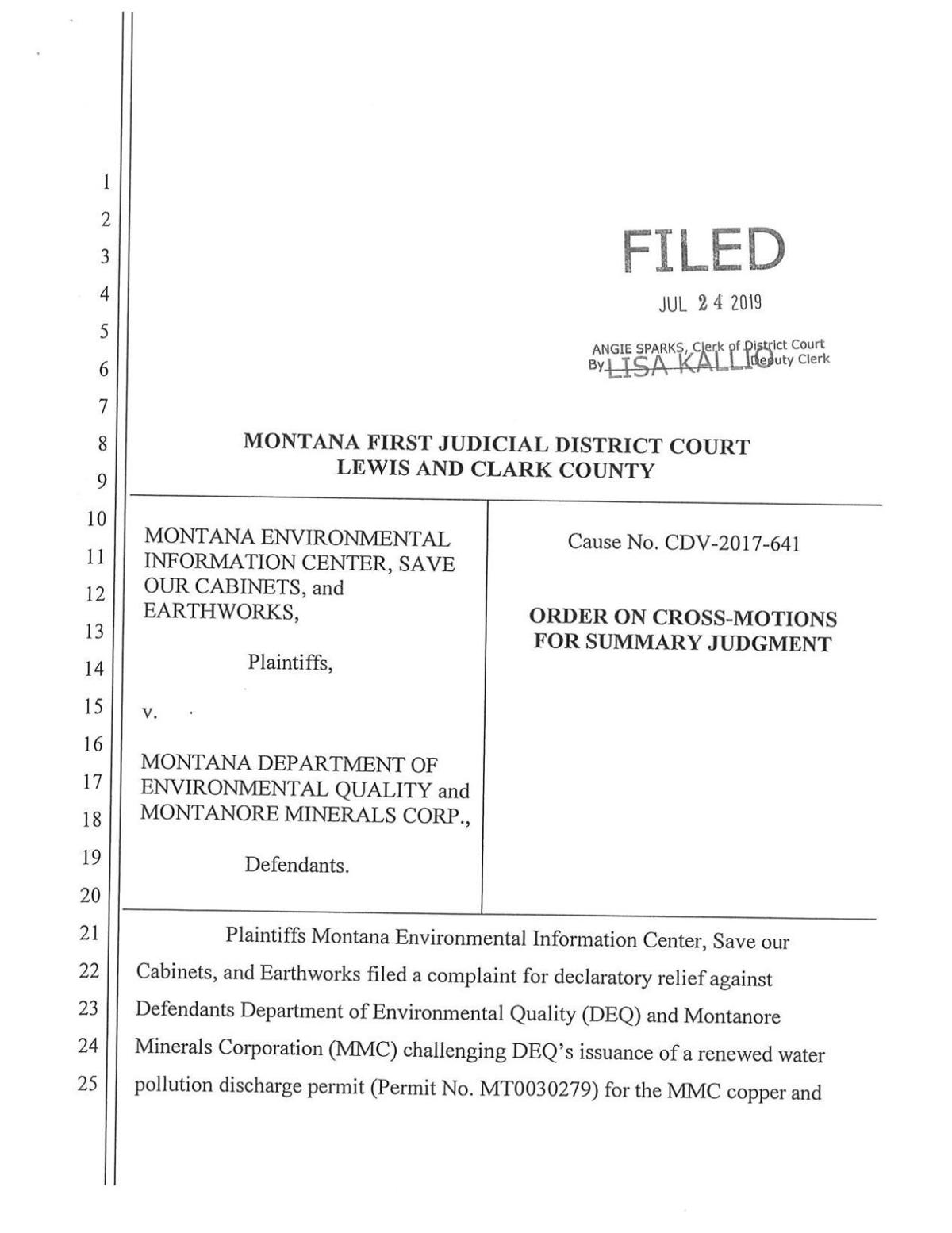 “This is a big win for clean water,” said Bonnie Gestring, northwest program director for Earthworks, which is one of the groups that sued DEQ and Montana over the permit. “One of the bigger outcomes of the decision is that the court affirmed that the mine couldn’t rely on a 27-year-old permit that would allow unnecessary pollution of Libby Creek rather than complying with today’s laws to better protect Montana’s streams.”

The Montanore Project involves tunneling for copper and silver in the mountains between Libby and the Cabinet Mountains Wilderness Area. The ore body sought lies under the wilderness area, while all of the above-ground work that has been done is outside of the boundary.

Mining operations are expected to last for 16 to 20 years, with the removal of 20,000 tons of material anticipated at peak operations, and close to 20 years of closure and post-closure work. It would employ 450 people at full production, and is being proposed by the Montanore Minerals Corp., whose parent company is Hecla Mining Co.

“This ruling protects clean water on public lands that belong to all of us,” Earthjustice Attorney Katherine O’Brien said in a press release. “The decision from the court also sends a strong message that our state environmental agency cannot cut corners when it comes to permitting industrial pollution in our streams.”

The other environmental groups involved in the lawsuit are the Montana Environmental Information Center (MEIC) and Save Our Cabinets.

Paul Driscoll, a spokesperson for DEQ, said he can’t comment on the order because the state hasn’t fully digested the contents of the 28-page ruling.

Luke Russell, a spokesperson for Montanore, also declined to comment on the ruling or the future of the project, saying they just received Seeley’s decision Monday morning and were still considering the implications and next steps.

“We are continuing to review the decision and analyze what it means,” Russell said.

Noranda Minerals Corp. first sought a permit for the Montanore Mine in 1989, but ceased construction of an adit in 1991 based on elevated nitrates in surface water and low mineral prices. Yet the company continued with the permitting process and in 1992 its petition to “Change in Quality of Ambient Waters” was issued by the Board of Health and Environmental Sciences, a predecessor to DEQ.

After the state protested the petition, Noranda was issued a Montana Pollutant Discharge Elimination System permit in 1997, which allowed it to discharge water used in the mining process to groundwater and Libby Creek. In 2002, after Noranda ceased exploratory mining operations and allowed most of the permits associated with the project to expire or terminate, the discharge permit remained in effect by DEQ to oversee reclamation, not to regulate mining operations, Seeley wrote.

Through a series of trades and sales, the project eventually was acquired by Hecla.

The groups involved in the lawsuit said the court determined that DEQ unlawfully relied on an outdated pollution authorization, which originally was issued in 1992 to a different company for a different project.

“The operational life of Noranda’s project ended in 1991, when Noranda abandoned the project, relinquished its federal mining authorization and began reclamation,” Seeley wrote in her decision. She added that restrictions on degradation of high-quality waters also have changed since the 1992 authorization.

In particular, the 1992 action allowed Noranda to discharge mine wastewater and contaminated storm water into multiple streams that provide habitat for bull trout, which were listed as a threatened species in 1998 under the Endangered Species Act. Some of the potential contaminants from the proposed mine include copper, manganese, zinc, ammonia and sediments.

“This decision protects streams that are fed by wilderness waters, which by their very nature, are critical for our native trout,” Mary Costello, executive director of Save Our Cabinets, said in a press release. “The decision also makes it clear that mining companies are not free to pollute our rivers and streams with unchecked mining waste.”

Russell said Molloy’s decisions sent the permit request back to the federal agencies for additional studies, and a Supplemental Environmental Impact Statement just on the evaluation and exploration phase of the project currently is out for public comment.

“There could be a decision next year on just the exploration side of the project,” Russell said. “Then Montanore will decide, based on the data, whether and how to go forward with the full mining project.”

In April, Seeley also ordered the Montana Department of Natural Resources to reconsider its approval of plans of the Rock Creek Mine, which also is under the Cabinet Mountains Wilderness. Seeley agreed with challengers who argued the underground project would drain water from streams and lakes inside the wilderness.

Hecla also has come under fire by the DEQ, which filed a lawsuit to stop Hecla CEO Phillips Baker Jr. from moving forward with the Montanore and nearby Rock Creek mine after finding he’s violating Montana’s “bad actor” law. Baker formerly was an executive with Pegasus Gold Corp., which operated and abandoned cyanide heap-leach gold mines in Montana in the 1990s.

The bad actor law prohibits development of new mines in Montana by executives whose companies defaulted on cleanup obligations. Hecla and Baker are challenging the determination.

Jim Jensen, executive director of MEIC, said it’s “time for this project to just go away.”

“After 35 years, no state administration or company has been able to protect water and wildlife in the Cabinet Mountains from this mine,” Jensen said in a press release.

Woman goes public about abuse after settlement aimed at prevention

MISSOULA — There could have been a different Bella Butler. Maybe she’d be a college student in another state. Perhaps she’d bond with her room…

The website Politico on Tuesday reported Senate Minority Leader Chuck Schumer, D-NY, came to Montana over the weekend in an effort to try to convince the Democratic governor to run against U.S. Sen. Steve Daines this year.

Man gets 50 years in prison for decapitation death

For the first time in a decade, Montana schools are using fewer emergency authorizations than the year before as small, rural schools continue to struggle finding teachers.

A 61-year-old Helena man died in a single vehicle crash east of Butte on Monday morning.

A former employee of an emergency foster care program in Great Falls has been given a deferred sentence after hitting a 7-year-old girl in her care in January 2019.

The Cabinet Mountains south of Libby are the site of the proposed Montanore Mine.

Glenn Dobbs, CEO of Spokane-based Mines Management, discusses Montana's regulatory climate with then-Republican gubernatorial candidate Greg Gianforte, left, during a tour of the Montanore Mine in this 2016 file photo.