Twenty-three vehicles were helicoptered from East Rosebud Lake on July 21, an area where they were trapped when flooding in mid-June destroyed the only road in.

“It was actually quite the operation,” said John Miller, an East Rosebud Creek neighbor who volunteered to help shuttle cars. “It was really impressive to watch the guy fly that helicopter.”

A three-quarter ton diesel truck had to be left behind because it was too heavy for the Black Hawk HH 60L helicopter from Central Copters in Belgrade to lift. Another vehicle was buried deep in flood debris and rock.

The cabins are located in the small community of Alpine, about 13 miles southwest of Roscoe in Carbon County. Many were originally owned by Billings residents.

The six-hour airlift is the latest challenge for the 68 cabin owners surrounding the mountain lake, a place that also saw two wildland fires, the last in 1996. Many of the residents who chose to stay during the heavy rain and flooding on June 12 and 13 were helicoptered out by the National Guard, with only 15 minutes to prepare.

Among them was Bozeman resident Dayle Hayes and the two friends who had joined her at the lake.

"I will never hear National Guard evacuation in the same way again," she said.

Hayes added the crew was efficient and professional during the airlift, a time when residents were a bit anxious, uncertain and tense.

“Disasters tend to bring out the best in people,” Erickson said. “Our experience so far is that people have been amazingly generous with their time and work.”

Left behind, however, was Hayes' nearly new blueberry-colored Subaru. She had been without a car until the purchase last June, so it wasn't anything new to be car-less, but it was frustrating to have a new auto she couldn't drive for almost five weeks.

Luckily for Erickson, she and her husband evacuated their cabin before the road and bridges were washed out. But she said even when they left, the nearby creeks were a “raging torrent. It was like a tsunami of water.”

Erickson said she had to learn a lot about helicopters to help arrange the evacuation. Air temperature, wind and the altitude all factored into the operation. She also found out that car insurance wouldn’t cover any of the cost because there was no damage to the vehicles.

To evacuate a single car may have cost as much as $20,000, Hayes said it was rumored. Having to airlift 23 significantly lowered the cost to about $3,300 each. Erickson noted it was still cheaper than buying a new car or continuing to rent one for an unknown amount of time. A Billings helicopter service was initially contacted, but got called out for a forest fire.

The other option for cabin owners was to wait until the road is repaired. Although emergency federal funds have been awarded to the Custer Gallatin National Forest for such work, no contract has yet been signed. Erickson said it could be two to three years before a permanent road is installed.

“The road is critical for a number of reasons – one being that this crown jewel is now hardly accessible to anyone, and that in order for the flooded out cabin owners to protect their beloved cabins, we need a road," Erickson wrote in an email. "Everything that's been done like sand bagging and trying to steer the river away from the cabins has been done by hand and a small little skid steer.  Shovels, picks, sand bags (with all the new sand) and elbow grease has been the primary way we've had to protect the cabins. We truly need at least a temporary road, and hopefully before winter this year."

In Yellowstone National Park the storm took out several sections of the road between the northeast and north entrances, leading to a temporary closure of the entire park. Homes and businesses along the Yellowstone, Clarks Fork of the Yellowstone and Stillwater rivers and Rock Creek in Red Lodge were also damaged or destroyed in what has been provisionally characterized as a 500-year flood.

The vehicle airlift turned into a party-like atmosphere when the autos were deposited at Jimmy Joe Campground, Erickson said.

“So it was a joyous day to have those cars rescued,” she said.

Four people helped load the cars onto a specially built rack at the lake while another eight shuttled cars out of the way so the helicopter could quickly make another car drop.

“It looked like fun,” Erickson said of the cars floating along in the sky at the end of a cable. “I wish I could have rode along.”

Some of the East Rosebud cabins have been in families for generations, with the main lodge about 120 years old. So for the homeowners and guests being evacuated, having to helicopter out vehicles and being unable to access their summer hangouts has been emotional.

“There’s so much affection for that lake,” Erickson said. “Everyone wants to know what’s going on and how they can help. They feel helpless because they can’t get up there.”

Right now, other than a helicopter, the only way in is by foot. Erickson said that’s an arduous 3.5-mile hike through downed timber, boulder fields, thick forest and brush. Caretakers were helicoptered in to clean up cabins that were left in a hurry, including clearing out refrigerators so food didn’t rot while the power was out.

Those willing to fly or hike in are finding the region unusually peaceful.

“There are a lot of upsides to it,” Erickson said. “The Beaten Path has become the Beaten Highway in recent years, which is not pleasant. So everything is taking a rest.”

The Beaten Path is one of the most popular hiking trails in the Custer Gallatin National Forest’s Beartooth Ranger District. It travels between East Rosebud Lake and the Clarks Fork Trailhead, located 4 miles east of Cooke City.

Hayes said she's focused her gym training on being able to hike to her newer cabin, a goal to work toward. Her older cabin was destroyed in the 1996 Shepard Mountain fire.

Updated: Flights resume after being grounded around Billings

Currently, no flights are incoming or departing from the Billings airport, said new airport director Jeff Roach. It's unknown how long the gro…

Legislator's bill could affect auditor that fined her employer $2.7M

Rep. Nelly Nicol, R-Billings, has disputed that her bill was retaliatory against the state auditor’s office or that it created such an appearance.

"We want all lawmakers to see the number of people across Montana who are here to support and protect our Constitution," said Kris Glenn.

Bill would allow doctors to not provide procedures they object to

GOP proposal to spend $1B advances in Legislature

Ukraine will fight for Bakhmut ‘as long as we can’: Zelenskyy 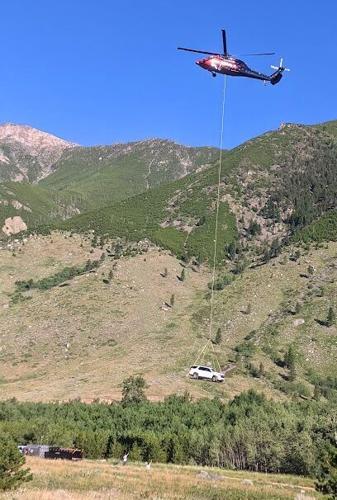 A Black Hawk helicopter lowers a vehicle at Jimmy Joe Campground south of Roscoe on July 21 after picking it up near East Rosebud Lake. 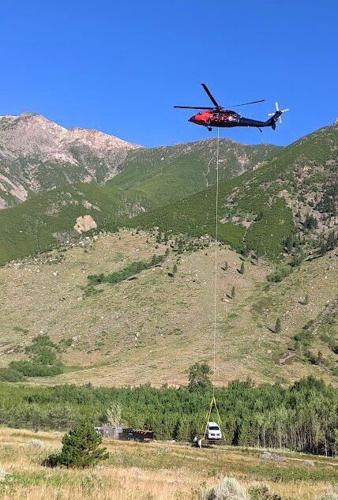 Twenty-three vehicles were helicoptered from the East Rosebud Lake community of Alpine to Jimmy Joe Campground, about 3 miles away. 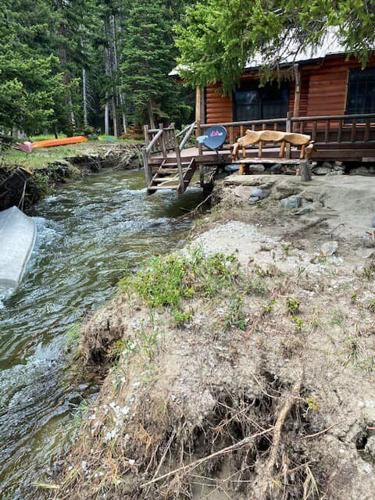 Creeks swelled in size near Alpine and damaged cabins in the East Rosebud Homeowners Association on June 12 and 13. 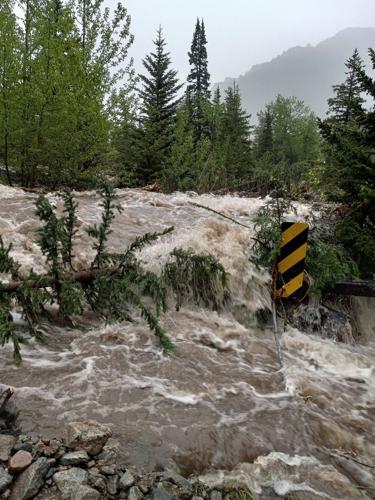 East Rosebud Creek turned into a raging torrent during the flooding. 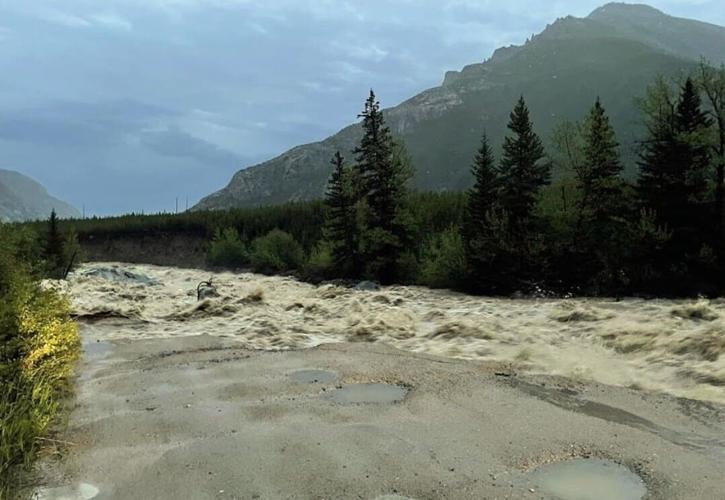 The flooding damaged the East Rosebud Road and took out two bridges that access the popular recreation area. 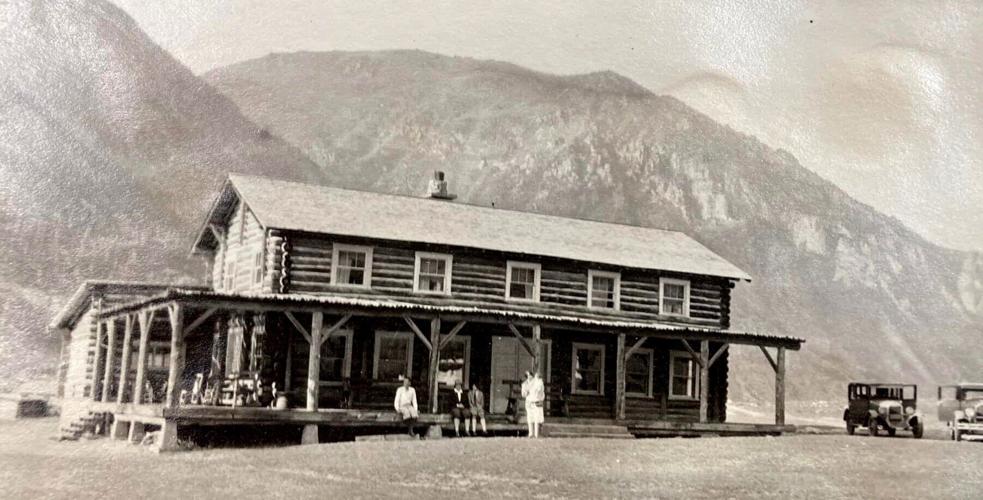 The lodge for the East Rosebud Lake Homeowners Association is about 120 years old and has survived wildland fires and flooding.