Two Montana state agencies are going head to head in District Court over whether the public can read reports involving alleged abuses by social workers who separated children from their families.

The case pits the Department of Justice against the Department of Health and Human Services. On Thursday, DOJ filed a petition in Lewis and Clark District Court in Helena asking Judge Mike Menahan to review so-called “Findings Reports” that outline how cases of alleged child abuse or neglect were mishandled by DPHHS workers. 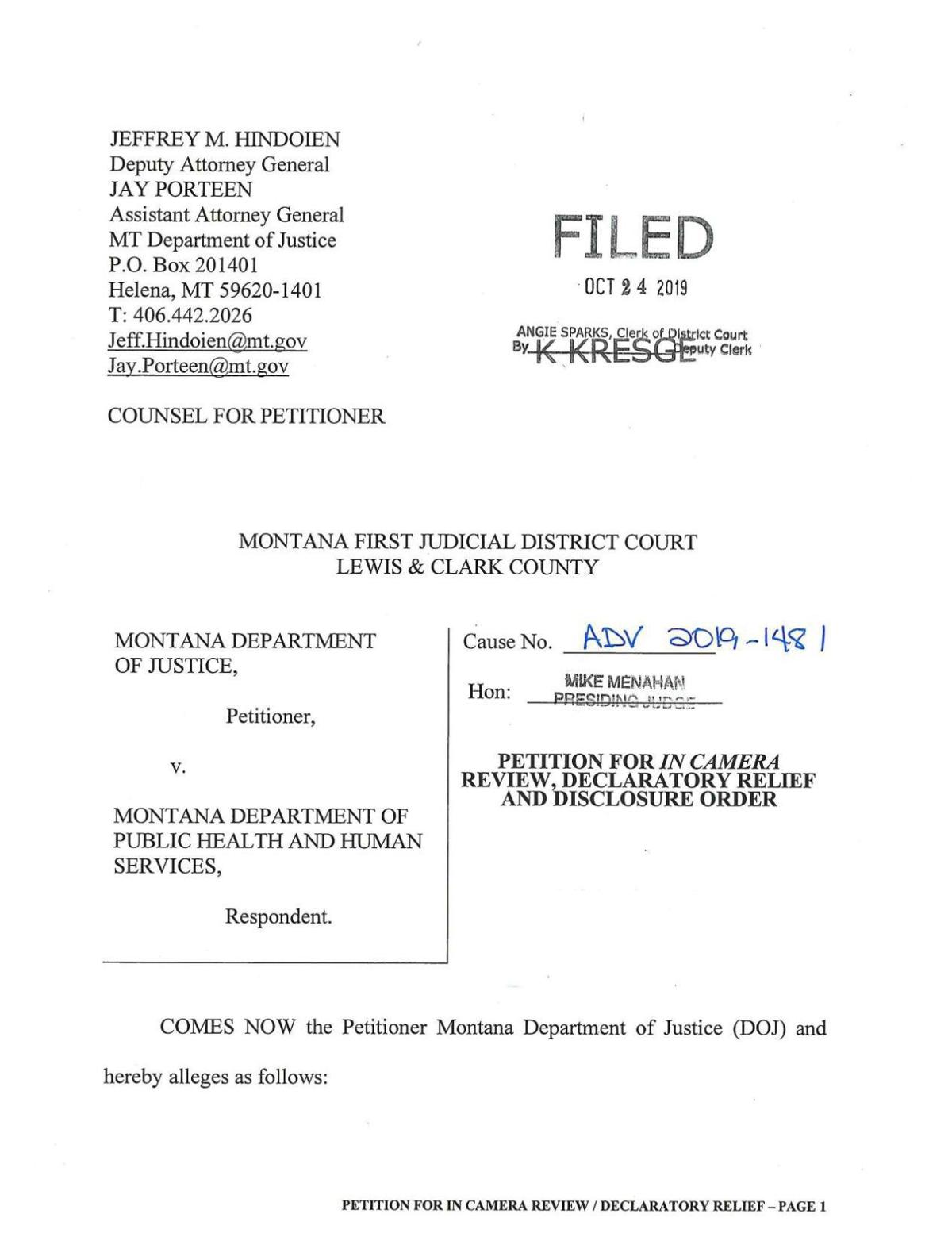 The DOJ, whose ombudsman’s office investigated and wrote the reports, wants the ability to release them to the public once information that identifies the families involved is blacked out on the documents. As part of the legislation that established the ombudsman’s office in 2014, the agency is authorized “to share relevant findings related to an investigation, subject to disclosure restrictions and confidentiality requirements …”

That disclosure includes releasing the findings to the news media, if the information is “limited to confirmation of factual information regarding how the case was handled and if disclosure does not violate the privacy rights of the child or the child’s parent or guardian, as determined” by DPHHS, the lawsuit states.

Last May, the Missoulian received a half-dozen Findings Reports from family members who alleged abuses by DPHHS employees. The Missoulian requested copies of the 42 reports that had been written in the past five years. The Findings Reports only are created after the ombudsman receives requests from families for help regarding “actions, omissions and decisions” by DPHHS employees.

The ombudsman writes the Findings Report “if the investigation uncovers acts or omissions on the part of DPHHS that, in the assessment of the ombudsman, could have or did cause harm to the children or family and DPHHS did not or could not resolve the concerns,” the lawsuit notes.

DOJ agreed to post those reports on its website once the names and identifying factors involving the families were redacted after the Missoulian’s request for the documents.

“After assessment and consideration of the media request … DOJ has determined that not only the requested Findings Report, but also all other Findings Report documents can be redacted in a manner that removes any information that could potentially identify any individual involved with the subject of the Findings Report, and therefore not implicate any individual privacy rights,” the DOJ wrote in the lawsuit.

Since the Missoulian’s initial request the number of Findings Reports has grown to about 50.

DOJ went on to cite a Montana Supreme Court case that recognized “when appropriately employed, redaction offers a means for disclosing relevant public information while protecting a privacy interest.”

“Further, DOJ also recognizes its obligation to allow access to public information upon request pursuant to … the Montana Constitution except where the demands of individual privacy clearly exceed the merits of public disclosure,” the lawsuit states.

The reports given to the Missoulian by families showed how Child and Family Service Division (CFS) employees:

• Misled court officials who in one case removed a child from the mother’s care and released the child to the father, who relapsed into his substance abuse while the child was in his care. Meanwhile, the mother was given “arbitrary and unreasonable expectations” of steps needed to regain custody.

• Punished a mother by reducing visiting time with the child despite a court order to the contrary, with the employee “indicat(ing) joy at reducing the mother’s visits.”

• Placed a child in a stranger’s care, even though multiple family members were available.

• Placed four children with their noncustodial father after an unexplained injury to the youngest child. At the time, the father was suspended from his job due to allegations of sexual assault. The CFS division didn’t investigate that allegation or follow up on it.

DPHHS protested the release of the documents, saying the state agency believes the Findings Reports are confidential. At that time, DPHHS spokesman Jon Ebelt said they would ask the court for guidance on the two statutes; one governs the confidentiality of CFS case records and the other subjects the ombudsman to confidentiality and disclosure restrictions.

According to the lawsuit, DPHHS also disagrees with DOJ’s practice of providing copies of the Findings Reports to Disability Rights Montana, which is the state’s designated Protection and Advocacy program.

On Thursday, Ebelt reiterated DPHHS concerns, and added that the agency has 42 days to respond to the lawsuit.

Just shy of 100 people spoke in opposition of the legislation from Sen. John Fuller, R-Kalispell, while nearly 45 people supported it.

Lawmakers say a fatal bounty hunt in Butte was a "tipping point" to bail bond legislation at the Statehouse in Helena.

The reforms come with some subtext as the state still faces litigation against bills the 2021 Legislature passed, which has featured some procedural maneuvers Republicans have rebutted as unfair.

Will fish and wildlife issues again be some of the most hotly debated issues of this session, or will the 68th Legislature be marked by more consensus-building and agreement for a state known for its natural resources and wildlife?

Gov. Greg Gianforte struck a triumphant tone in his second State of the State address to the Legislature on Wednesday night.

Speakers offered the alternatives as both tailoring education to individual needs as well as promoting families and parents to dictate the education of their children.

Senate Bill 112 would give pharmacists the ability to prescribe what bill sponsor Sen. Tom McGillvray said was a narrow scope of medications.

Labor groups oppose a bill that would require public employees to sign a consent form each year affirming they want to remain in a union.