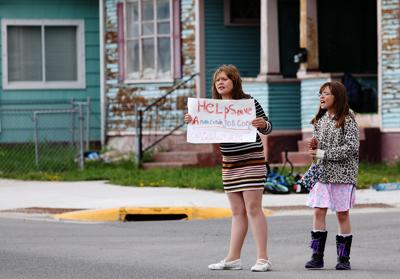 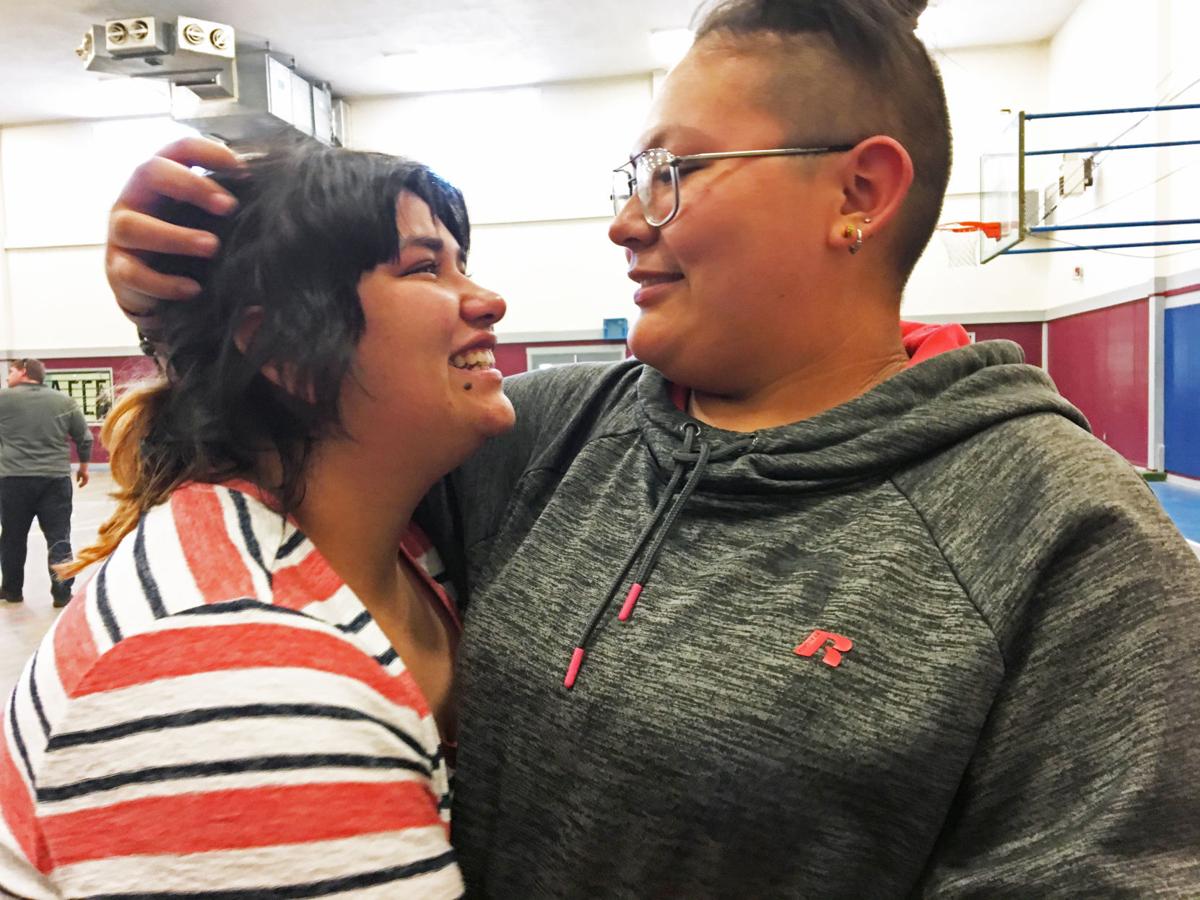 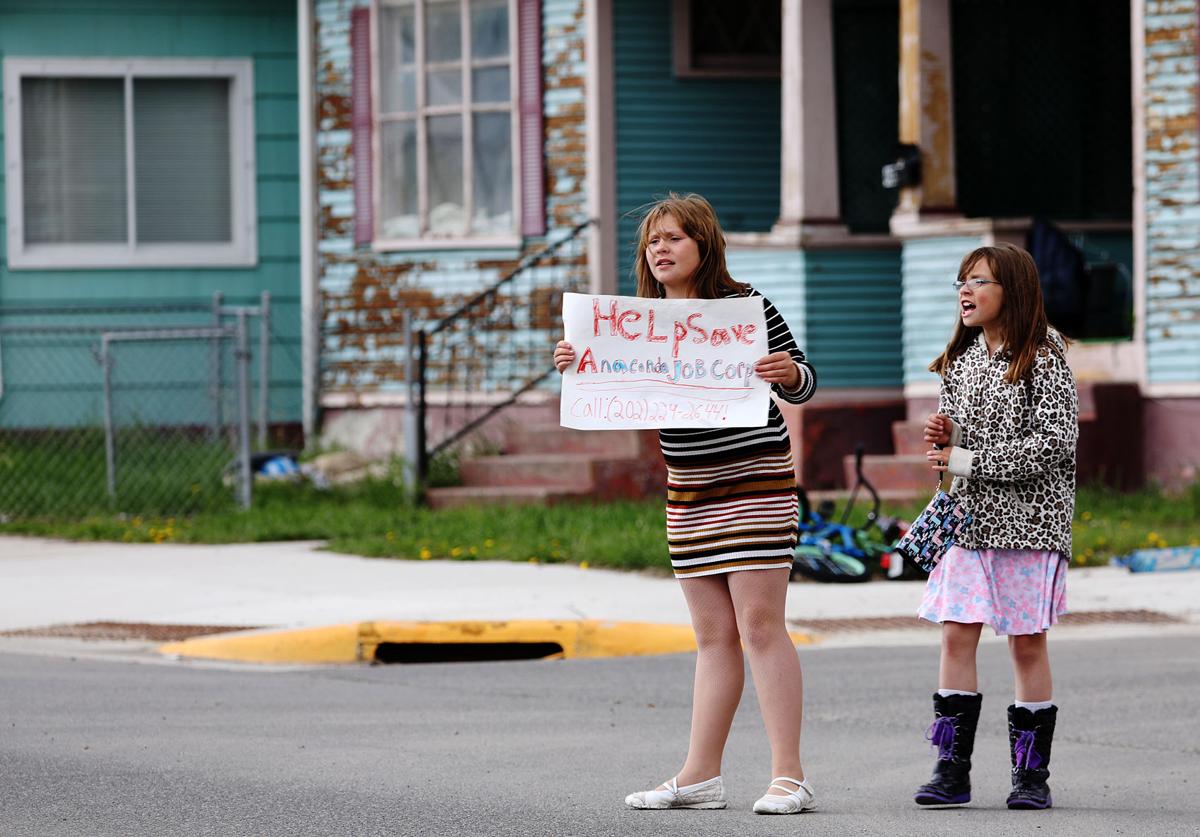 Jade Rodgers, 11, held a sign as she and Deidra Foster, 9, called out to passing cars along East Park Street in Anaconda in a photo taken just after the closure of the Anaconda Job Corps was announced May 24. "We are worried about our neighbors. We know a lot of people who work there," said Rodgers. 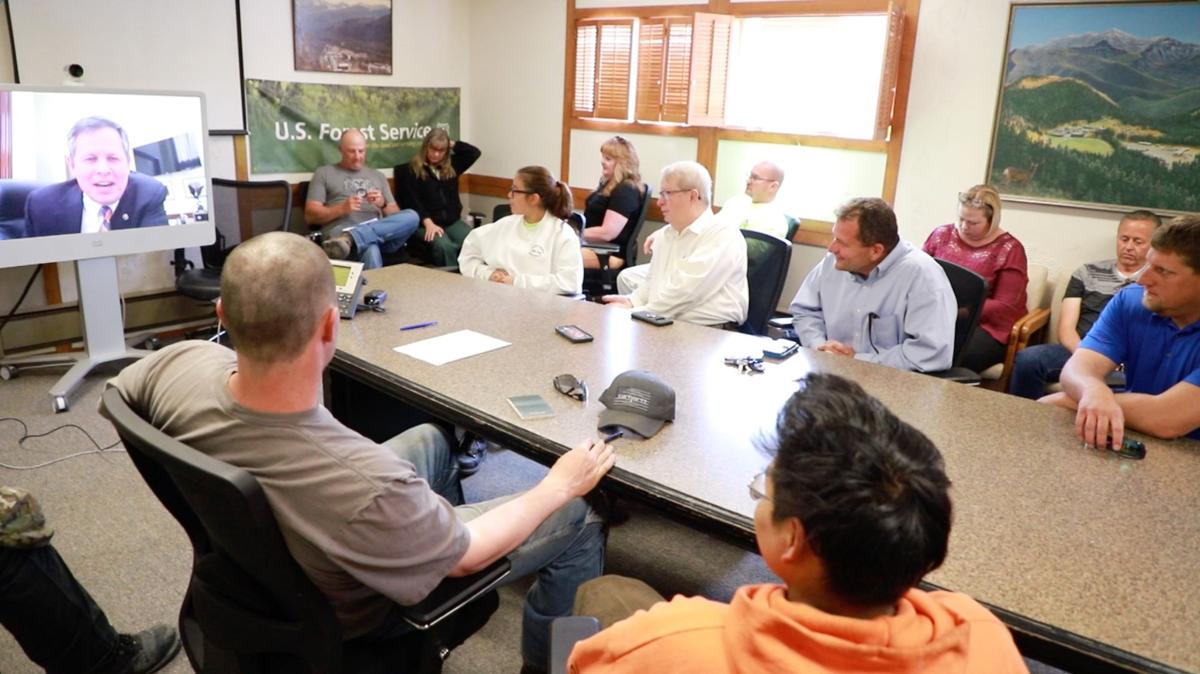 President Trump's decision followed Daines’ telephone discussion with Trump on Saturday. According to Daines' staff, the senator stressed that the Anaconda center was one of the top-ranked in the country and must remain open. Trump then overruled the decision to close the site.

The Anaconda Job Corps training center has some 170 students and 63 staff members.

The Department of Labor recently took over administration of the Job Corps conservation centers from the U.S. Department of Agriculture, which had operated the centers through the U.S. Forest Service.

Stakeholders and a handful of students were led into a conference room on the center’s campus, where they sat before a large television screen. Several minutes passed while Job Corps officials and officials from Daines' office managed the usual technical difficulties, while students were busy being students, quietly chatting and nervously joking among themselves.

“The problem is back in Washington D.C., but that’ s usually where the problems are,” said Daines of the technical difficulties.

After a brief thank you to all who fought to save the center, Daines unveiled the big news.

“On Saturday I decided it was time to elevate this to the very top, so I picked up my phone and I called President Trump. And because of that call I have some big news to share with you today: President Trump has decided to overrule the decision to close the Anaconda Job Corps training center.”

The room erupted into applause.

Daines said one of the reasons for the president’s decision was the Anaconda center’s good standing and history of success. In the month of April, the center ranked number eight among all Job Corps centers in the country, and number one in its region.

“When I laid out what Anaconda does for the community, for our state, for wildland firefighters, for our trade unions, (and for) preparing the future workforce for the 21st century … he decided to overrule the decisions of his secretaries,” said Daines.

“I wanted to congratulate you all and thank you for what you’re doing,” the senator concluded.

Ray Ryan, director of the Anaconda Job Corps., thanked the senator and introduced two students who rushed to Anaconda for the call from Dillon, where they were dispatched for firefighting duties.

“More than you can possibly imagine,” replied Hawk McLeod, one of the students, holding back tears.

Daines said helping to save the Anaconda Job Corps and presenting the voices of students, staff and community leaders is a highlight of his career and “was a moment I’ll never forget.”

“I thank you so much, this means everything to Anaconda. We could not afford to lose this center,” said Bill Everett, Anaconda-Deer Lodge chief executive officer, addressing the senator.

Chandler Edward, 18, a welding student, said he was relieved by the announcement and that the entire ordeal was like a roller coaster.

“We had this shroud that was hanging over us, and now its gone,” he said.

The Anaconda Job Corps will remain under the U.S. Department of Agriculture and it will remain a Civilian Conservation Center, still providing support to wildfire forest fighters, Daines said during a conference call with reporters Monday.

Ryan said he was “absolutely” relieved to hear the center would remain a CCC, noting that keeping the center under the Forest Service is critical to the center’s conservation mission.

“I greatly appreciate President Trump working with me to save these Montana jobs," Daines said Monday.

Over the course of the past week, Daines spoke directly with U.S. Secretary of Labor Alexander Acosta and U.S. Secretary of Agriculture Sonny Perdue on the importance of the center and the need to reverse the decision.

Sen. Jon Tester told reporters last week during a press conference by phone that he plans to introduce legislation to reverse the decision.

The legislation would block the Trump Administration from using funds in 2019 or 2020 to close any Job Corps in the country. The bill would also prohibit any federal government agency from making changes to agreements that operate Job Corp facilities, which would prevent existing centers from being privatized.

Tester’s office sent out a news release Monday stating that the senator still intends on introducing the proposed bill. Tuesday, he is to outline his legislation on the floor of the U.S. Senate, according to the release.

On Friday, Bullock had a phone call with Acosta to urge him to reconsider the decision to close the Anaconda Job Corps. He also sent a letter to Acosta and Perdue last week expressing the value of the program.

“I’m pleased that the right decision was made to keep Anaconda Job Corps open, maintaining jobs for over 60 people and ensuring workforce training for hundreds of at-risk students each year,” said Bullock in a news release. “I have no doubt it was the voices of the Anaconda community, folks from all over the state, and the workers and students who protected this critical rural training center.”

Daines said he could "only speak to Anaconda."

"The president agreed with my recommendation to keep Anaconda open and keep it a CCC (Civilian Conservation Center)," Daines said by phone from Washington, D.C.

The announced closure of the Anaconda Job Corps site had evoked concern from local employers, government officials and others.

After the conference call, Job Corps staff made their way to the center’s gymnasium, where they gathered students and made a campus-wide announcement.

There too students applauded. Some embraced, while others wiped away tears.

Cindy Perdue-Dolan, Daines' field representative, addressed students, noting that Daines utilized his goodwill and his relationship with the president — “and he told them about you,” she said. “He told them that you are on the path of incredible success if you keep your heads down and work.”

Job Corps student Isreal McConnell cried tears of joy upon hearing the announcement, and she was embraced by fellow students.

“My whole life I felt like I wasn’t going to be able to do things,” said McConnell.

But once she found the Job Corps, she said, she felt like she was finally getting a leg up.

Because of this, she said, the May 24 decision was highly distressing. She thought she had lost her only opportunity to take a positive step forward. “I thought my chance was over,” she said.

“And now,” she continued, losing her words. “Oh, thank goodness.”

A 49-year-old Helena man died from injuries sustained in a motor-assisted bicycle crash on Saturday.

A Montana man who worked as a hunting guide received a lifetime suspension of his hunting, fishing and trapping rights Friday after poaching multiple trophy big game animals in 2017.

A Saturday night fire on the 3500 block of Placer Drive in the Helena Valley has left one man injured and a dog dead.

When game wardens shot a mountain lion near downtown Helena last Wednesday, it struck a nerve with many who questioned why the animal was not …

'Ready for anything': Lolo Hotshots prep for Alberta fires

About 20 firefighters with the Lolo Interagency Hotshot Crew set out from Missoula Tuesday. Their eventual destination: Somewhere in the 256,000-square-mile Canadian province of Alberta.

Jade Rodgers, 11, held a sign as she and Deidra Foster, 9, called out to passing cars along East Park Street in Anaconda in a photo taken just after the closure of the Anaconda Job Corps was announced May 24. "We are worried about our neighbors. We know a lot of people who work there," said Rodgers. 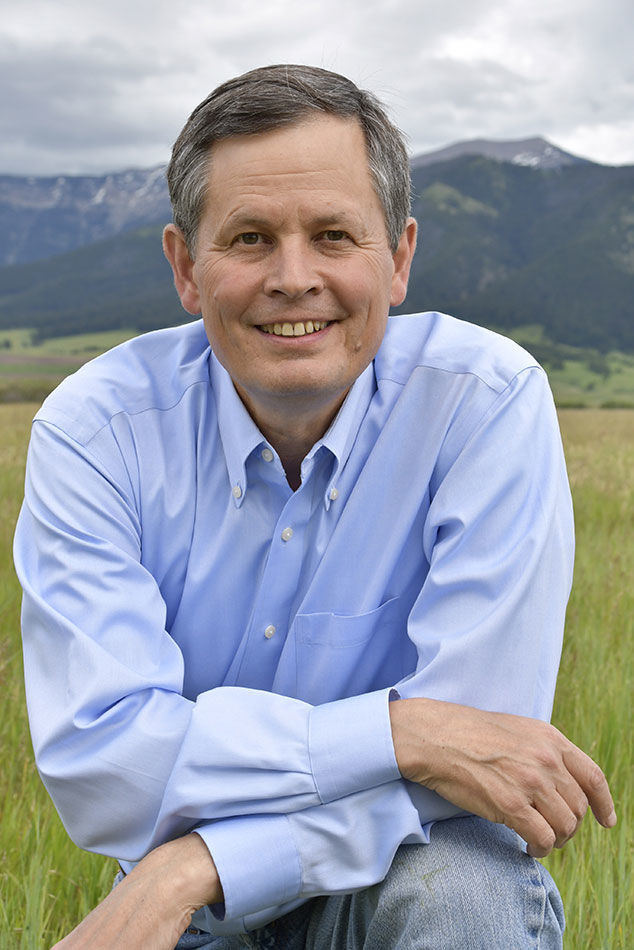