Helena mayor and Democratic U.S. Senate candidate Wilmot Collins is accused of rear-ending another driver's vehicle and leaving the scene of the crash.

Collins, 55, is being charged with misdemeanor counts of careless driving and failing to remain at the scene of an accident.

Kimberly Doherty, a 35-year-old Butte woman, reported a hit-and-run crash around 6:42 p.m. Monday. Doherty told Helena police she was driving southbound on Last Chance Gulch before stopping to turn left onto Lyndale Avenue, when she was struck from behind by a vehicle driven by Collins.

Doherty told police she pulled over as Collins continued west on Lyndale. She later told the Independent Record she followed him while honking her horn, and they both pulled into the Van's Thriftway parking lot in the 300 block of Euclid Avenue.

Collins provided his business card to Doherty and then left, police reported. Doherty told the Independent Record she waited in the Van's parking lot for around an hour before Helena police officers arrived to take her statement.

Both vehicles had minor damage and no injuries were reported, police reported.

Collins released a statement Friday afternoon that gave his version of the incident.

"On the evening of May 20th (I) made a mistake. I was at the stop light at Euclid and Last Chance, when I accidentally nudged the back of a car that was stopped in front of me. The contact was so light that I did not realize I had made contact with the other vehicle," Collins wrote.

Collins said the other driver honked at him to flag him down, and they both pulled into the Van's parking lot.

"I gave her my card and told her I would pay for any damage to the vehicle at any repair shop of her choice," Collins wrote. "I followed up with the woman whose car I damaged the next day to see if she had gotten a chance to assess the damage or book an appointment to repair her vehicle and she had not yet had a chance to book an appointment."

Collins said he sat in the Van's parking lot and watched the other driver leave.

Doherty told the Independent Record she remembers it differently.

"I called after he gave me his business card, as he was driving out of the parking lot," Doherty said. "I said we had to call law enforcement and that we had to stay."

When reached for comment, Collins said "I stand by my statement."

Helena's interim Police Chief Steve Hagen said he would not be releasing any additional information about the crash and will be out of town until Tuesday.

Collins said he plans to plead guilty to careless driving and not guilty to leaving the scene of an accident, "because I did not leave until after the other driver left."

Collins has two prior charges of failing to carry proof of/or exhibit insurance in a vehicle and two speeding tickets in the city of Helena. 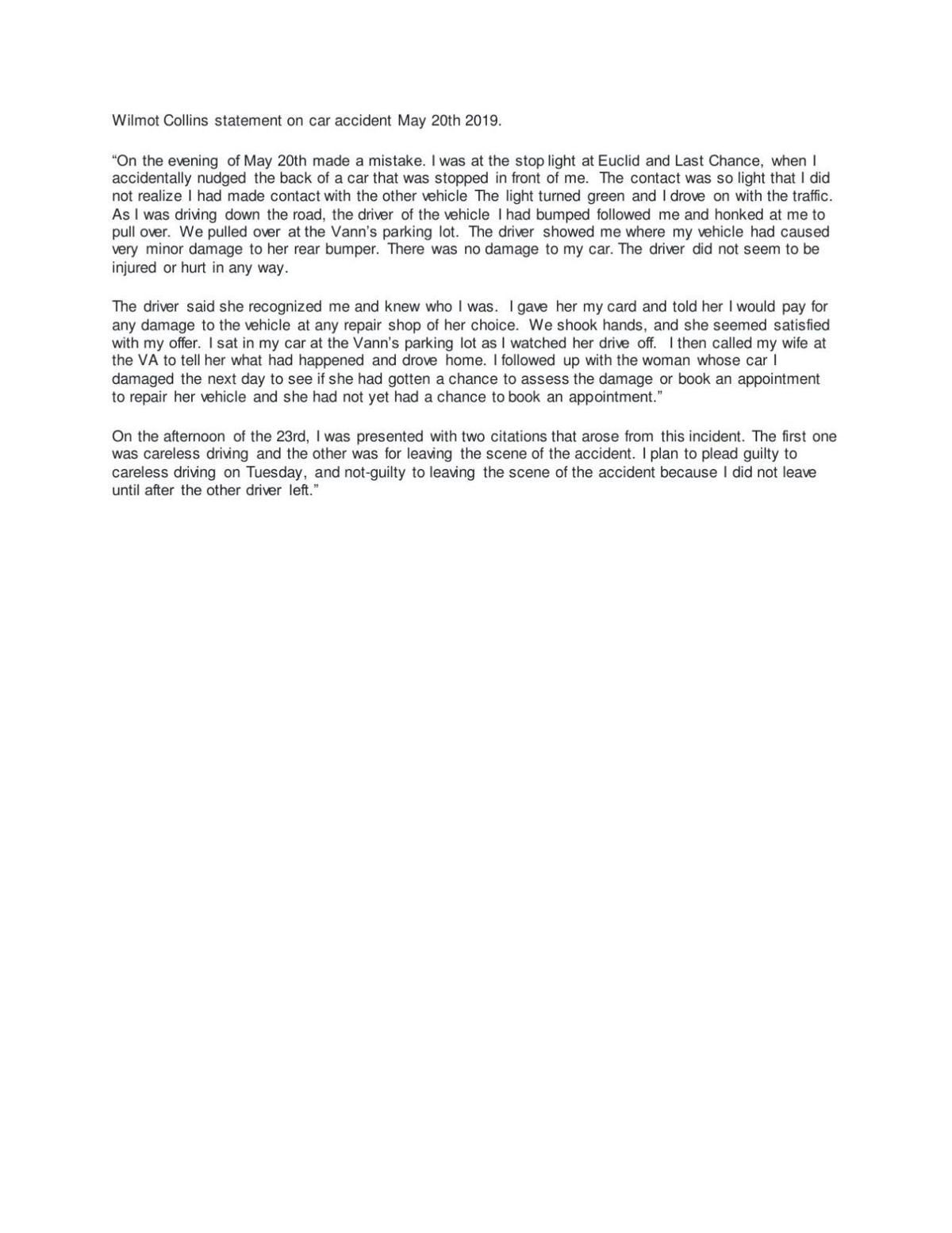 The most read stories of the Independent Record for 2019

A mountain lion, medical marijuana, record wind chills and more are among the most read stories of the year so far.

2019 was a roller coaster of a year. Let's take one last look by revisiting its most-read local news stories.

A Helena jury has awarded more than $400,000 in damages to the estate of a man who was resuscitated against his will at St. Peter's Hospital.

After a quarter century, Jim Posewitz’s book "Beyond Fair Chase: The Ethic and Tradition of Hunting," still stands as one of the seminal works…

Authorities killed and removed a mountain lion that was found outside a NorthWestern Energy building near downtown Helena Wednesday morning.

It was a humbling experience for Conor Coutts when he was chosen by his fellow Carroll College graduates to speak at graduation last Saturday.

Visibility was down to about 100 yards when a Montana Highway Patrol cruiser drove quickly into the Gates of the Mountains Marina on April 28.

A row of old officers' quarters on the Fort Harrison VA hospital grounds is being turned into a Freedom's Path community, which provides housi…

A missing and endangered person advisory was issued Friday for 15-year-old Makenna Ann Thompson, who was last seen Sunday and initially report…

With Emily Dean filing on Wednesday, four are in the running for the two Helena City Commission seats up for grabs in this fall’s municipal el…

The weather fit the solemn occasion in East Helena on Monday. A Humvee, a drag racer and a fire truck drove slowly down Main Street as veteran…