Become a Member
Read Today's E-edition
Share This
Connectivity, livestock hang in the balance as grizzlies show up in ranching town
0 Comments
Share this 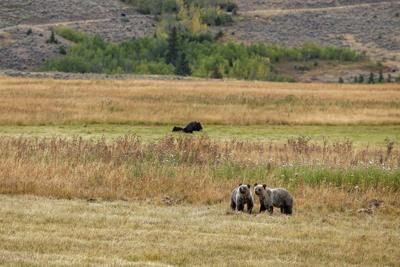 This story is part of the Lee Enterprises series "Grizzlies and Us." The project examines the many issues surrounding the uneasy coexistence of grizzly bears and humans in the Lower 48, which have come  into focus in recent years as the federally-protected animal pushes farther into human-occupied areas. The 10-part series, comprised of more than 20 stories, was produced by outdoor reporters and photojournalists across the Rocky Mountain West.

Bill McIntosh gathered his family around the kitchen table at the ranch house and told the grizzly tale, unable to hold back tears.

"If you see how these bears kill those things — they were in agony," he said. "The last steer we found, his neck was broke. His nose was crushed into splinters.”

Late this spring, Bill and his son, Gib McIntosh, trotted up a creek one evening and saw a grizzly. Momentarily, the bear circled around through the timber and back towards its kill — one of their yearling steers.

The grizzly huffed as it moved downhill, closing in on the two men.

“Too close,” Gib said, right before he and his father got out of there.

The bear was suspected of killing two yearling steers in close succession in late May, and U.S. Wildlife Services verified a grizzly had killed three other yearlings on the ranch earlier in the spring.

Bill had only seen a couple grizzlies in a lifetime spent in Avon, and never had a problem before.

His ranch house in the southwest Montana community of Avon has served the McIntosh family for six generations, and they still ride the range horseback to check cattle. On their combination of leased private ground and Forest Service land, the family runs about 900 head of cattle over some 10,000 acres, so bear mitigation is no simple matter.

As bears expand to new territory, many ranchers find themselves working with government wildlife managers and nonprofit groups to devise non-lethal solutions to protect bears and livestock.

The stakes are high for bears and ranchers alike.

For bears, it may be necessary to travel through the ranching valley to connect populations. For the McIntosh family, protecting their livestock isn’t just about business.

“There's a point where people think, oh, well, you're just looking at the dollars — you’re going to kill them anyway,” said Jill McIntosh, Bill’s wife. “No. We care for them. We are with them from the time they hit the ground.”

"And besides the livestock, these kills were within a mile of my home,” Gib added. “I have two little boys. (My brother has) three little girls. That's something we never worried about growing up as kids. We'd go running around and be gone all afternoon. And you'd be kind of nervous to let your kids do that now.”

He found three calves chewed up in early spring, one after another. Which each dead calf, he grew more suspicious, but at first he didn’t assume a predator was responsible. Coyotes were on the carcasses, but there was nothing unusual about that.

Two of the calves were found near the pit where the ranch traditionally heaped carcasses. Some dead animals are all but inevitable on a big ranch like the McIntosh family has.

In case bloating was the cause, the family tried changing the feed. Finally, Bill said a U.S. Wildlife Services employee measured the bite marks on the third kill, and determined it was a grizzly.

At the same time, it was discovered a bear was digging for carcasses in the pit. After several attempts, U.S. Wildlife Services and Montana Fish, Wildlife and Parks officials managed, with a hunk of road-kill deer as bait, to draw a grizzly into a culvert trap nearby.

By all accounts, that 429-pound male bear was docile inside the trap. The bear was relocated to the Bob Marshall Wilderness, and has stayed there in the heart of the Northern Continental Divide Ecosystem since.

“I think we just caught an innocent bystander,” Jill said.

“He was just coming to have his breakfast in the pit,” Bill added. “I really don't think that bear was a problem at all.”

The McIntosh family removed the cow carcasses from the pit — four cows that had flipped over on their backs and died, and a few dead calves — as advised by wildlife managers.

There wasn’t much mystery with the second bear.

After Bill and Gib retreated, Gib and his brother Lou McIntosh went back for the carcass and the bear was still nearby. Wildlife managers and the McIntosh family then found the bear had killed another steer. Using that the steer for bait, the bear was trapped the next day, his prints made a direct line through the snow into the trap.

The 6-year-old, 411-pound male wasn’t happy, to say the least. The bear was euthanized on May 24 and the McIntosh family hasn’t had a bear problem since.

Over the course of this past spring’s grizzly action on the McIntosh ranch, one bear suspected of the depredations was euthanized by Montana Fish, Wildlife & Parks personnel, and another was relocated. Grizzlies have been sighted in Avon now and then, but this year saw more activity than normal.

Avon sits just south of Ovando and Helmville, where grizzlies are more common and conflict prevention efforts are further along. An Ovando-based collaborative called the Blackfoot Challenge has formed a range-rider program to patrol ranches and head off potential predator-livestock conflicts by alerting producers. The Blackfoot-Clearwater valley also has a carcass pickup program in place.

Rory Trimbo, FWP grizzly specialist in Anaconda, is working with the city of Deer Lodge to establish a compost site to facilitate carcass disposal which would be a benefit to the Avon area.

He’s also working with Avon ranchers, both to help avoid conflicts and study the bears.

After the second bear was captured at the McIntosh Ranch, Trimbo installed a rub post with barbed wire to see if he could get some hair samples for DNA testing. That can establish which population a bear came from, its sex, and other information.

Bill has checked the post for Trimbo, and they’ve come up with a couple good hair samples.

“Avon's kind of a new territory for this many bear showing up, so it's good information,” Trimbo said.

Wildlife managers have counted a minimum of four grizzlies active in Avon this year, about the same number of yearling steers the McIntosh family lost to them. Based on reports from other ranchers, there could be more grizzlies around than that.

The Montana Livestock Loss Board paid Bill $1,084 for each of the five McIntosh steers killed.

The family raised the yearlings for an entire year, and would have sold them this fall. Subtracting feed and labor, he said the steers were worth substantially more than he was paid for them. Margins are tight in the cattle business.

This year looks a little better, Bill said, but beef prices — what ranchers get, not what folks pay at the store — have been down.

“The last two falls, if you broke even you did pretty well,” he said.

Still, the McIntosh family is making adjustments to protect themselves and their livestock.

“I bought bear spray for the first time in my life,” Gib said with a laugh.

Bill has changed where he pastures animals based on when and where the depredations occurred. As for livestock guardian dogs, Bill said he’s not ready to make the leap. The expenses and time involved are considerable.

“It’s not as convenient for us. It’s not the way we’d like to do it. But if it saves a few yearlings and saves some problems, we’ll do it,” he said.

After his experience this spring, he’d like to have the option to shoot a grizzly in a pinch, though he figures that’s easier said than done.

“(It’s) especially not easy to do if you’re raising cattle and working with cattle all day and then trying to mitigate your bear problem at night,” he said.  “Frankly, we’re very vulnerable.”

A Lee Enterprises series on how the Lower 48 lives with grizzly bears - one of the West's most iconic wild animals - and how they live with us. 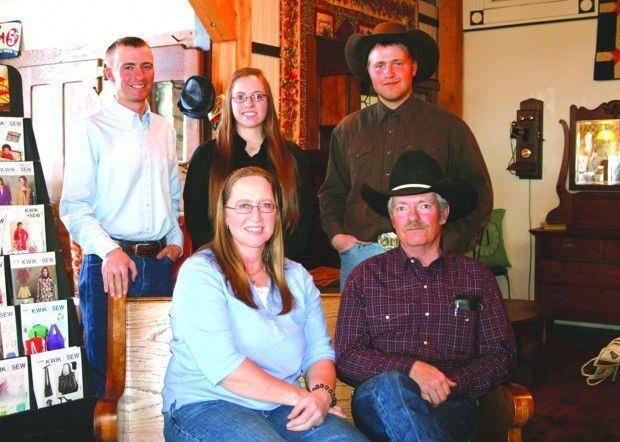 The McIntosh family poses for a photo in 2010 with Lou, Heather and Gib in the top row, and Jill and Bill McIntosh in front. 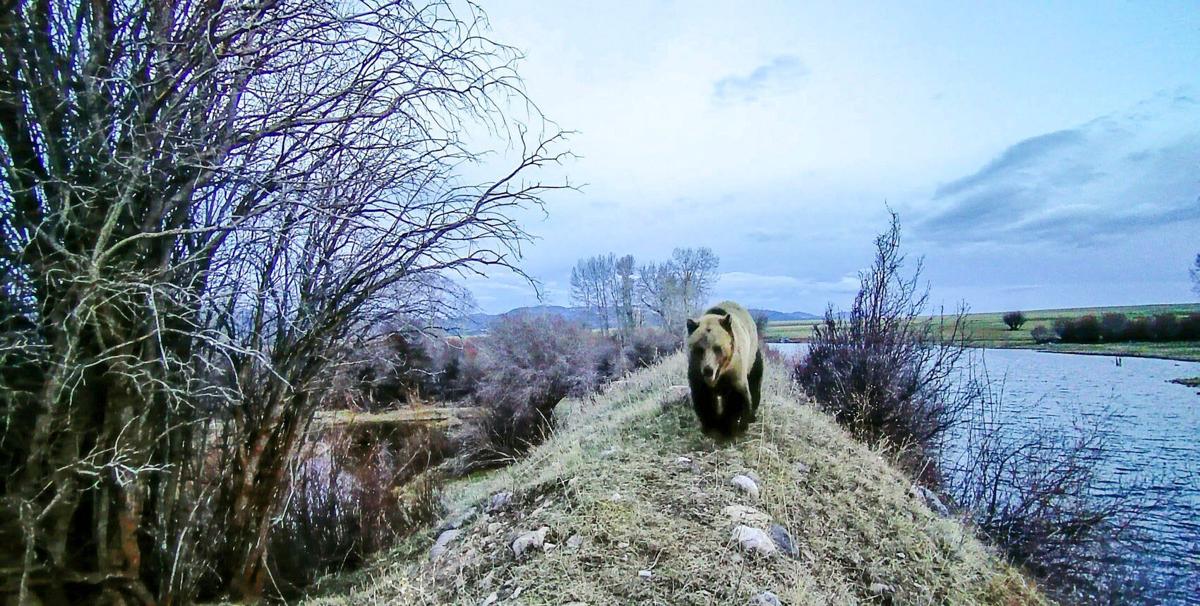 One of several grizzly bears that have been roaming Avon this year is captured on a game camera by People and Carnivores, a Montana non-profit dedicated to reducing conflicts between people and large carnivores.