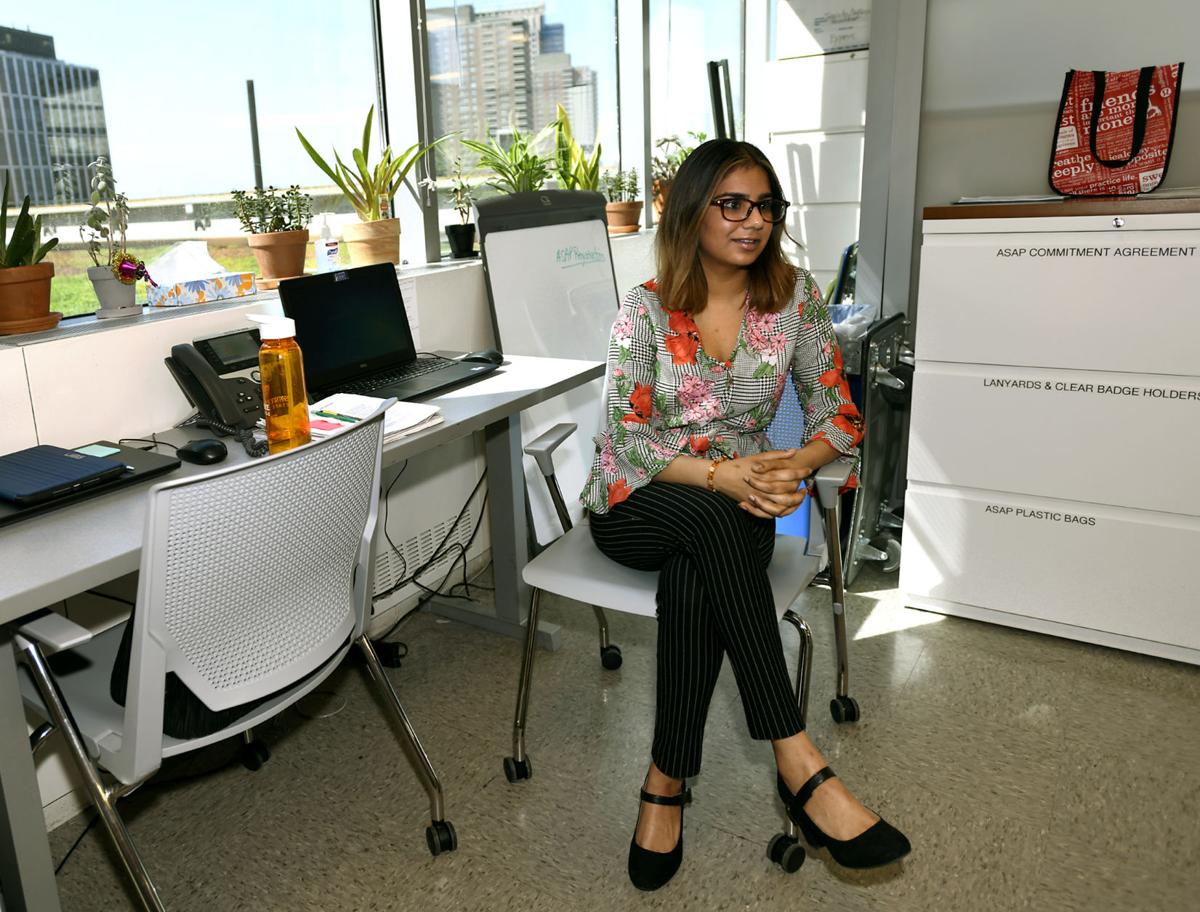 Shalini Doodnauth sits in one of the offices at Borough of Manhattan Community College, one of the City University of New York campuses, last spring. Doodnauth is one of many CUNY students helped by Accelerated Studies in Associate Programs, which removes barriers to graduation by offering help with financial support, textbooks, MetroCards, tutoring and other services. 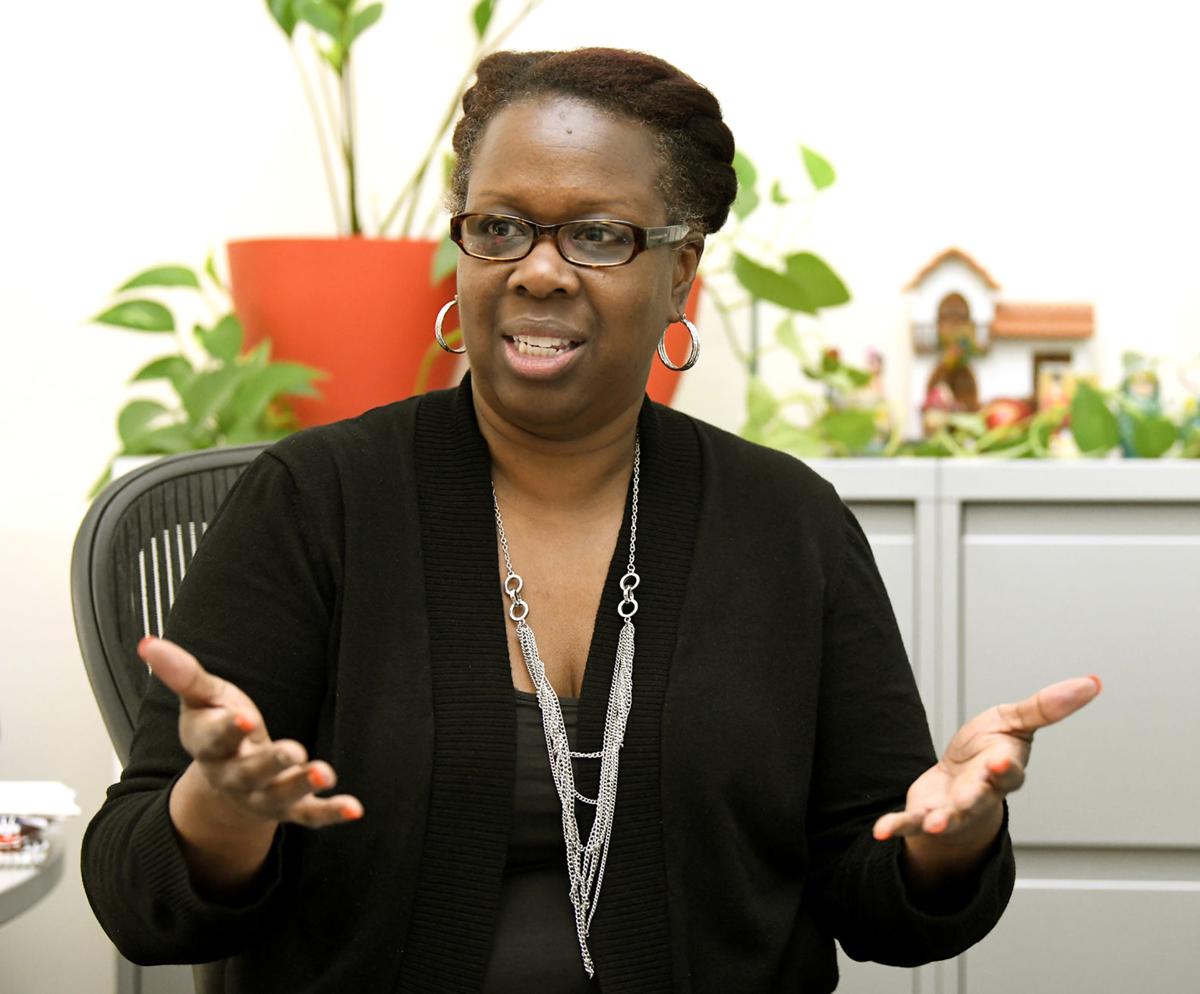 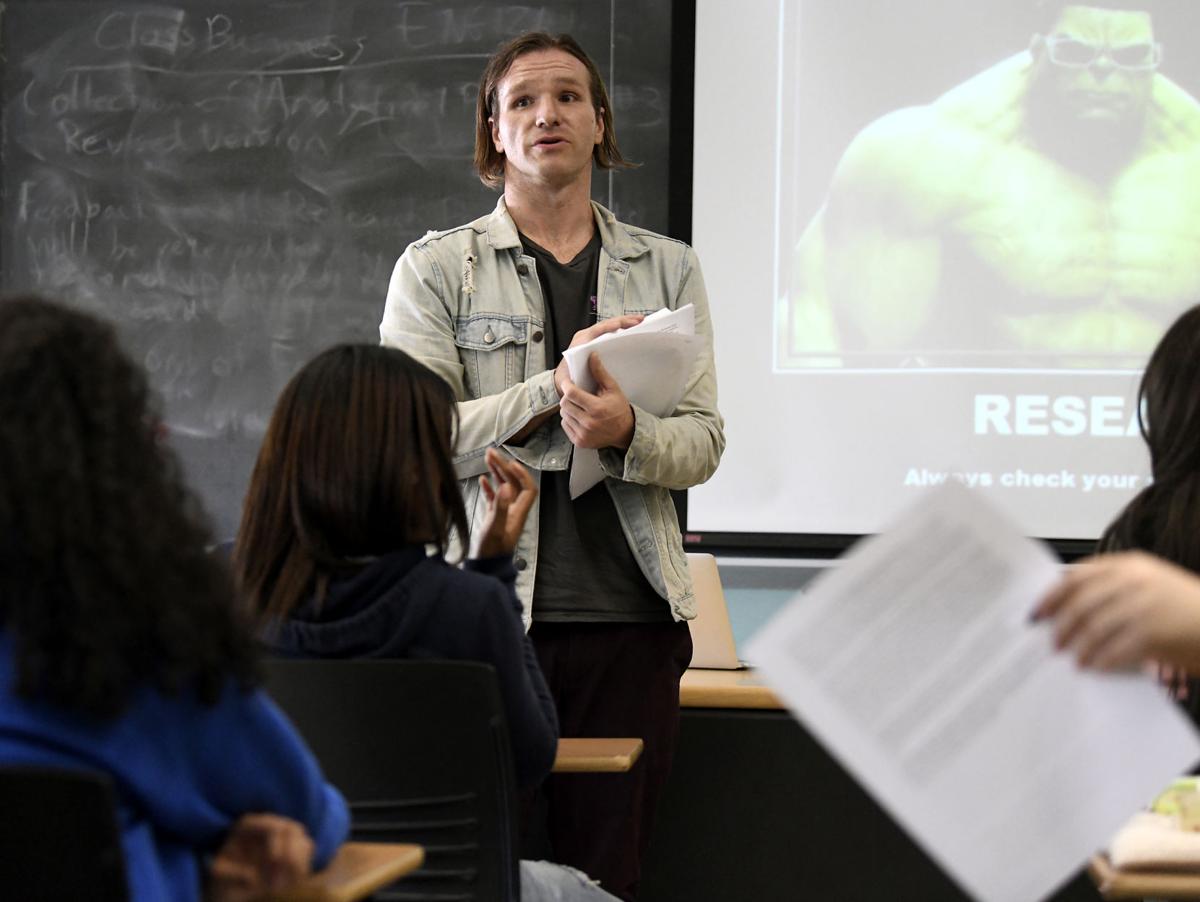 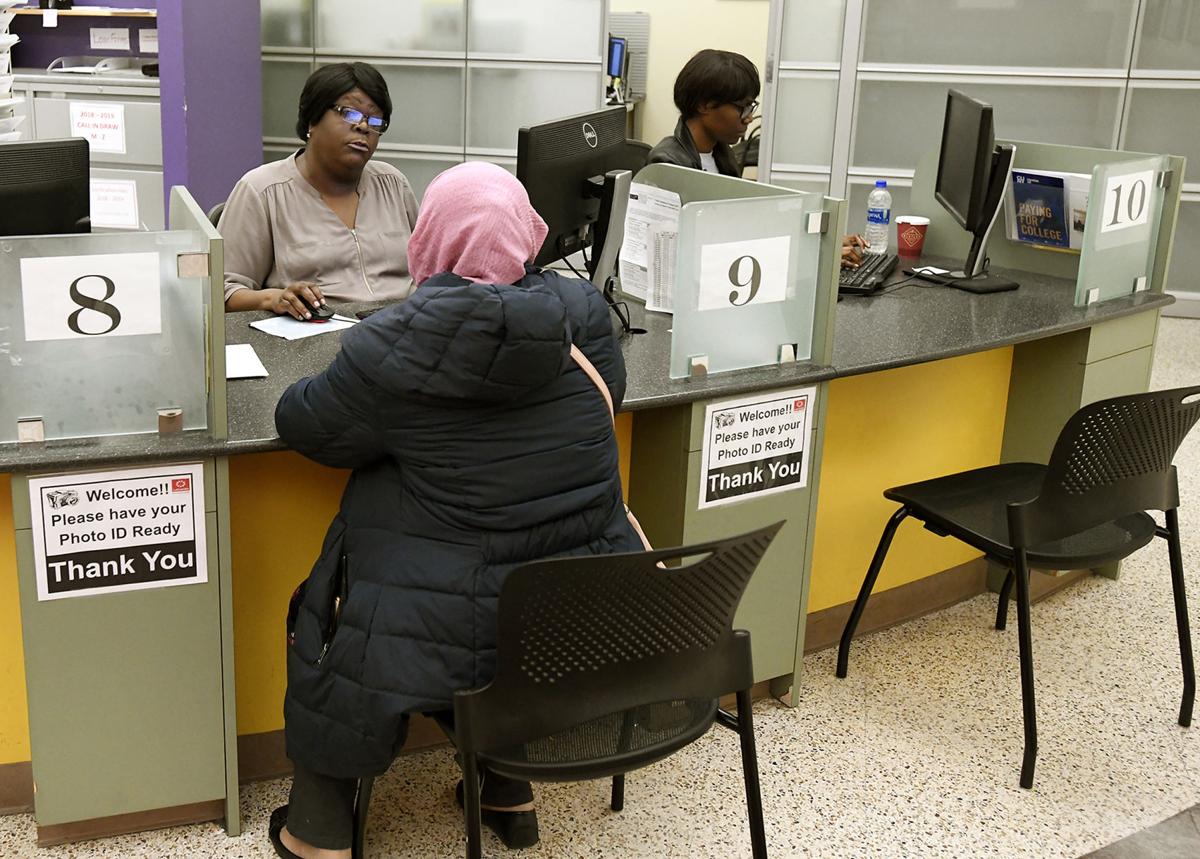 Christine Thorpe, left, helps a student in the financial aid customer service office at LaGuardia Community College in New York City last spring. The college's Single Stop office is nearby, reducing the stigma if students also need to talk to someone about food assistance, housing or other life issues. 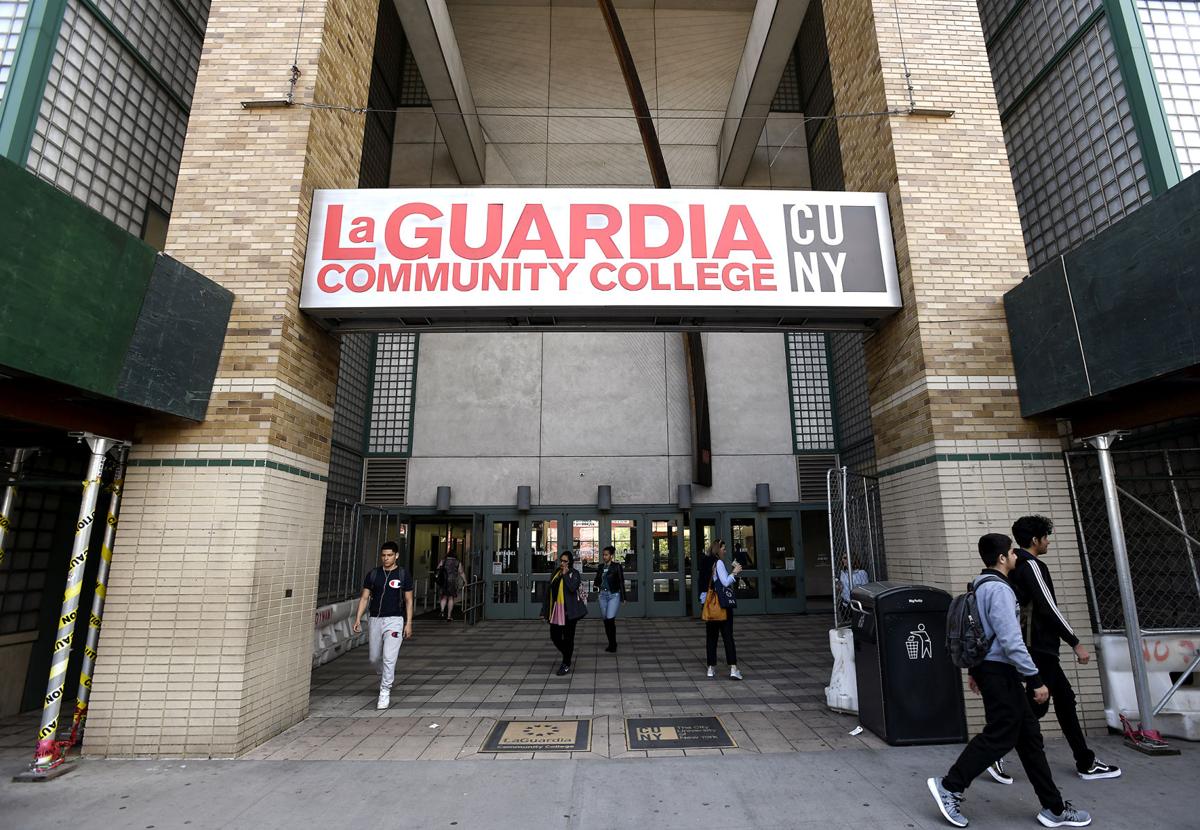 The Single Stop program at LaGuardia Community College and other CUNY campuses isn't academic, but it helps keep students on the path to graduation by helping them with life issues that might cause them to drop out or do poorly in their courses. 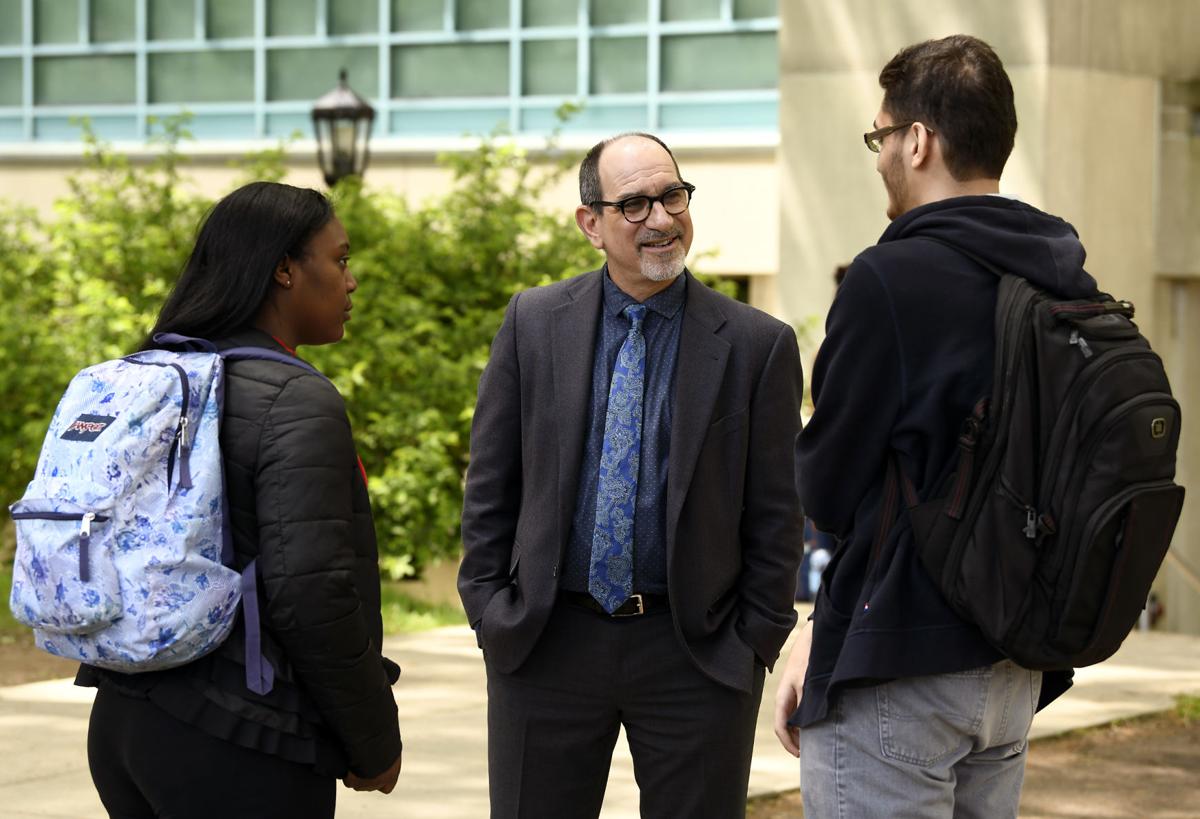 NEW YORK CITY — As a freshman, Shalini Doodnauth had no intention of going to school full time at City University of New York.

Then, she learned about ASAP, Accelerated Studies in Associate Programs. When she needed help paying for a $300 textbook, ASAP paid. The program provided her a MetroCard. And when she struggled in her accounting classes, ASAP supplied a tutor.

“It can get tough, no matter what major you’re in,” Doodnauth said of college. “Sometimes, I would hear a lot of students saying, because of all the financial support (ASAP is) giving you, I found there was no excuse to give up.”

Across the United States, students are besieged by stress, debt, housing and food insecurity, and family responsibilities. Housing insecurity was at 56% among college students in the country, according to a 2019 report from The Hope Center for College, Community and Justice.

And campuses have a goal to usher students to graduation, but schools often have only a tenuous hold on them. Despite success with upward mobility for students, Montana State University-Northern retained just 61% of 2017 freshman.

That’s not the case for many students at CUNY. The public university system spread over five boroughs in New York has programs such as ASAP acutely focused on students, and data show the methods work. 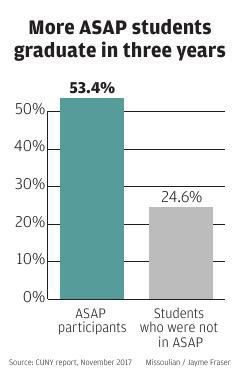 “It’s inescapable support,” said Deanne Southwell, head of ASAP at one of CUNY’s 25 campuses, the Borough of Manhattan Community College or BMCC.

Professor Tanzina Ahmed, once a CUNY honors student herself, said faculty and staff are realizing the “kid glove” treatment honors students receive must become the norm.

This fall, the Montana University System will launch a pilot based on ASAP, Montana Project 10 (see related story), but CUNY has a wide menu of programs that support students.

Here are some highlights.

The recipe for ASAP is simple.

“At the heart and soul of our program is our support services,” said Christine Brongniart, head of ASAP for CUNY’s central office.

The program launched in 2007 with a push and funding from Mayor Michael Bloomberg’s Center for Economic Opportunity. (Many campuses with a sharp focus on students also have strong partnerships with community.)

“How are we really going to look at completion as this mechanism to drive social and economic mobility?” Brongniart said.

In other words, how could CUNY remove barriers for students?

The answer came straight out of the literature. Brongniart said ASAP pulled together all the interventions shown to work into one program.

“We demonstrated really early on that we would be able to indeed really, really accelerate students’ academic momentum,” Brongniart said. “We saw a doubling of completion rates very early on.” 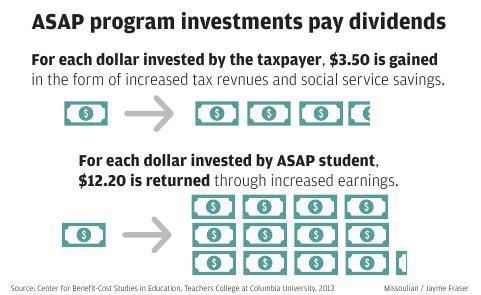 Six years after the program started, 63.6% of ASAP first-time freshman had earned an associate degree, bachelor’s degree, or both, compared to 43.3% of students who were not enrolled in ASAP, according to data from CUNY.

Akira Johnson, a freshman last school year, said ASAP helped her with her MetroCard, money for books, tutoring and time management. The computer science student from the Bronx said she would not be able to afford books or transportation without ASAP.

“I don’t think I would be in college,” Johnson said.

In an independent evaluation in 2015, a nonprofit, nonpartisan research and social policy organization called MDRC (formerly the Manpower Demonstration Research Corporation, but MDRC since 2003) offered this observation of outcomes: “ASAP’s effects are the largest MDRC has found in any of its evaluations of community college reforms.”

Opportunity Insights, a comprehensive study on economic mobility based at Harvard University, also found CUNY and other mid-tier schools in the United States pull the greatest portion of students from lower to higher income brackets.

CUNY has expanded its pilot to serve more than 25,000 students across nine colleges, and it has designed a similar program, ACE, to serve students on four-year campuses. ACE stands for Accelerate, Complete and Engage.

“The nature of our expansion has been very rapid, and we were very, very mindful not to compromise the model’s fidelity,” Brongniart said.

The model costs a lot up front, but it provides savings in the end, according to a study by the Center for Benefit-Cost Studies in Education at Teachers College Columbia University. With a shortened time to graduation, the study puts the average savings per degree at $6,500.

Key ingredients include financial support, such as tuition waivers and MetroCards; structured pathways to degrees; and comprehensive, data-driven support for students’ needs, such as tutoring.

Broningart said results come with a commitment to the complete model. “We have to serve the full meal, not just the appetizer.” Also, she said ASAP is not rocket science.

“It’s a common-sense approach to supporting students,” she said. 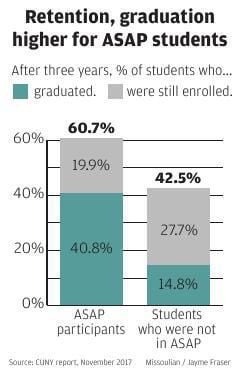 Getting high school students to take dual credit courses on college campuses is a lot like getting a kid in Little League baseball to hit the ball for the first time.

There’s always at least one kid who doesn’t really want to be there or worries that they’ll strike out. That’s where David Gantz, the director of College Now at Lehman College in the northwest Bronx comes in.

“Pitchers in Little League sometimes will walk them, but my philosophy is ‘Joey, you’ve got to swing the bat. I don’t want walks. I don’t care if you strike out. Swing the bat,’” said Gantz, who used to coach Little League.

Eventually, students will swing the bat and hit the ball, and realize that getting to first base wasn’t as scary as they thought.

Gantz said being on the campus is important because as much as students can practice — or think about college — it’s not the same as being in the batter’s box.

Gantz attributes the program's success at Lehman College to the model of getting students on the campus, which he calls the “Jewel of the Bronx.”

“You got to be in the college classroom with the requirements and the expectations and all the things you’re going to need to do and yeah, you’re going to stress out but it’s OK, I tell them,” he said.

The model, which requires students in the program to attend classes after school for two days a week, provides students with a true college experience and the academic rigor that comes along with it. Faculty members teach the courses, and staff act as a safety net.

Teachers like Benjamin Lambright, who teaches English composition, are able to contact College Now when students miss classes or assignments, and the office reaches out to the student's high school counselor or principal, or parents. Gantz will also text students, who he said rarely read emails.

"They get me, they get David, they get their counselor," Lambright said. "That's what really makes this work, is that level of interactivity."

Staff also refer struggling students to other CUNY programs to ensure they can enroll in college without needing remediation. Gantz said the students who complete the program are not only a step ahead academically, but also socially and emotionally.

"The transition to watch a child when they first start in a class when they’re like this deer-eyed high school student coming onto this large college campus … and now final exams are like a week away, they’re like different people. They’re fulfilling their role now as a college student." Gantz said.

Ahmed, a faculty member who studies food insecurity at Kingsborough Community College in Brooklyn said the greatest progress CUNY has made in supporting upward mobility for students is that campus leaders are engaged in understanding the severe nature of students’ problems.

Among them? Lack of child care. Lack of food. Lack of housing.

“They’re not your failing,” Ahmed said. “It is connected to larger issues of society.”

A partnership between CUNY and Single Stop, a nonprofit present at every campus, aims to help students get to the resources they need and public benefits they are eligible for without the stigma.

Single Stop screens students in order to find out which federal and state benefits they might be qualified to receive. Rhonda Mouton, program director for Single Stop at LaGuardia Community College, said the program itself isn’t academic, but it helps keep students on the path to graduation.

The Single Stop office is located with other financial services, a strategic placement that means no one knows if a student is there to talk about a loan or SNAP benefits, Mouton said.

Mouton works with students one on one, providing financial counseling and, in some cases, the unvarnished truth. One student informed her she and her family had not been paying rent for a year.

“Y’all are stealing,” Mouton told her.

The student pushed back. She hadn't come for a lecture, she said.

Mouton did not relent. She said the day would come when the family would get caught and be out of luck, and they needed to make a better plan.

“I’m sorry, but this is the truth,” Mouton said. “You all need to really sit down, come in, let us do a budget and help you because what you’re doing is not going to work.”

One year later, she said the student returned and thanked her. She had been living in her own home and appreciated the truth, although it was a difficult pill to swallow at the time.

On the heels of another school year, the Missoulian examines this week the role education plays in upward mobility. Across the United States, economists have tracked a steep drop in economic mobility across all 50 states in the last half century.

This series looks at challenges Montana students and educators face and models that have proven to make a difference. Stories were produced with support from the Education Writers Association Reporting Fellowship program.

Shalini Doodnauth sits in one of the offices at Borough of Manhattan Community College, one of the City University of New York campuses, last spring. Doodnauth is one of many CUNY students helped by Accelerated Studies in Associate Programs, which removes barriers to graduation by offering help with financial support, textbooks, MetroCards, tutoring and other services.

Christine Thorpe, left, helps a student in the financial aid customer service office at LaGuardia Community College in New York City last spring. The college's Single Stop office is nearby, reducing the stigma if students also need to talk to someone about food assistance, housing or other life issues.

The Single Stop program at LaGuardia Community College and other CUNY campuses isn't academic, but it helps keep students on the path to graduation by helping them with life issues that might cause them to drop out or do poorly in their courses.