As agricultural commodity prices suffer in President Donald Trump’s multi-fronted trade war, Montana farmers have received at least $114 million in 2019 payments from a federal program intended to help them weather the storm.

The Market Facilitation Program, administered by the United States Department of Agriculture Farm Services Agency, had made payments to 8,279 unique agricultural producers in 53 of Montana’s 56 counties in 2019 as of Dec. 4, according to data provided to Montana Free Press via a records request. Nationally, the program’s payments total more than $10 billion in taxpayer money.

The Market Facilitation Program was created in 2018 as a way to shield farmers from the trade war heat. In a release, U.S. Secretary of Agriculture Sonny Perdue described the program as “a short-term relief strategy to protect agricultural producers while the Administration works on free, fair, and reciprocal trade deals to open more markets in the long run to help American farmers compete globally.”

The 2019 payments are based on USDA estimates of economic losses caused by retaliatory tariffs levied on U.S. agricultural products imported into foreign markets. By making imports more expensive, those tariffs make it harder for American businesses to sell their products abroad, driving down commodity prices and cutting into farmers’ bottom lines.

For example, the USDA estimates pork tariffs stemming from the trade war have cost American hog producers $831 million — a figure that works out to $11 per head. As such, pork producers were eligible to apply for compensation of $11 per hog through the program.

For commodity crops like wheat, lentils, and chickpeas, the USDA pegged 2019 payments to estimated agricultural losses at the county level. To calculate a farmer’s compensation, the USDA multiplies the county rate by a producer’s eligible acreage. While major soybean- and cotton-producing counties in the Midwest and South saw compensation rates as high as $150 an acre, most Montana commodity farmers were compensated at the program’s minimum rate of $15 an acre.

Beef, one of Montana’s major agricultural products, isn’t included in the 2019 Market Facilitation Program. Compensated products include hogs, dairy, wheat, corn, and alfalfa hay, as well as some specialty crops like cherries.

Shortly after President Donald Trump took office in 2017, he pulled back from the Trans-Pacific Partnership, an unratified free-trade agreement negotiated by the Obama administration that would have limited tariffs and other trade barriers between the U.S. and several Pacific Rim countries. The Trump administration has instead sought to negotiate bilateral trade agreements, often threatening or implementing new tariffs as a negotiating strategy. Trading partners have often responded in kind.

After the U.S. levied tariffs on steel from China in 2018, for example, the Chinese government responded by adding tariffs to imported U.S. agricultural products, including Montana grain. Canada, Mexico, the European Union, Turkey, and India have also implemented retaliatory tariffs in recent years, according to the Congressional Research Service. Some of those tariffs have been lifted as nations reach new trade agreements with the U.S.

Montana farmers received $29.2 million through the program in 2018, according to USDA data. The $114 million total for 2019 includes two of three payment rounds, with the third expected later this month. Those figures don’t include other farm subsidy programs.

Montana hog and dairy producers have received $2 million through the Market Facilitation Program in 2019, with alfalfa hay producers receiving $2.6 million. The vast majority of Montana’s 2019 money — $109.2 million — went to commodity crop growers, who received on median $3,794 per farm. 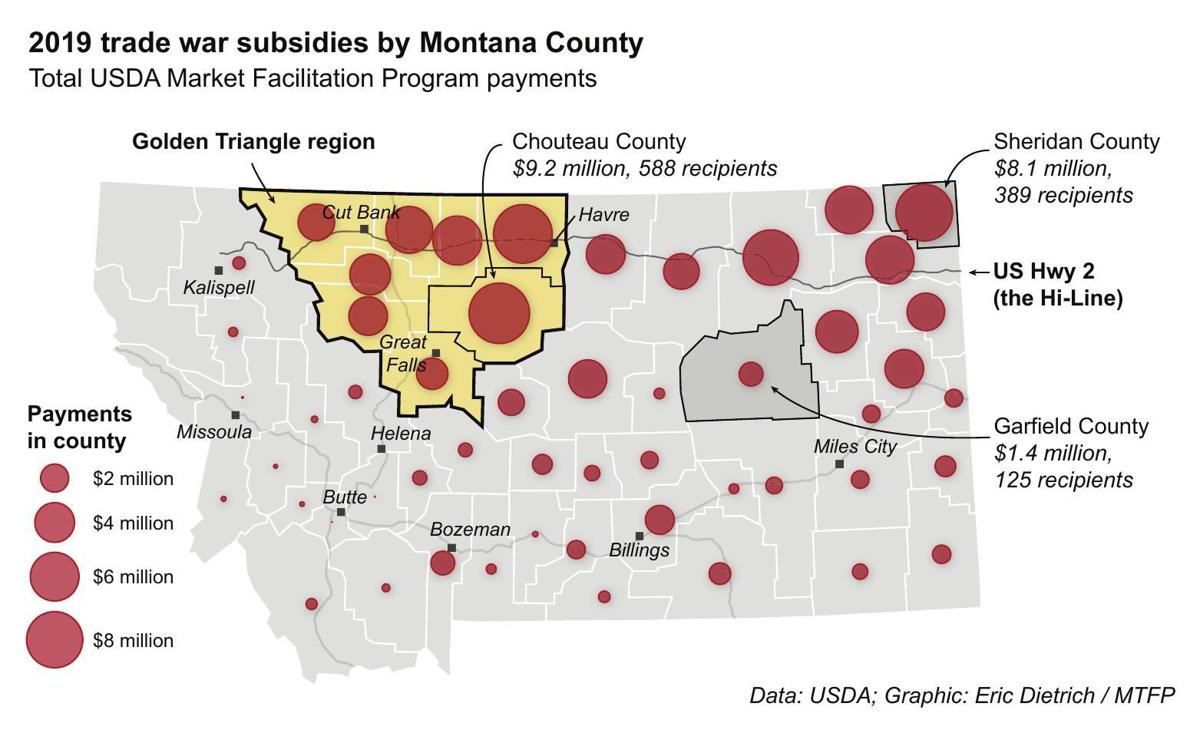 In terms of geographical distribution, counties in Montana’s “Golden Triangle” between Cut Bank, Great Falls, and Havre have received particularly large subsidies. One of them, Chouteau County, with 5,800 residents and more than 2 million acres of farmland, received the most assistance of any Montana county, with 2019 payments to 588 producers totaling $9.2 million.

For context, the USDA’s 2017 Census of Agriculture counted 633 farms in Chouteau County. According to the Bureau of Economic Analysis, Chouteau County’s net farm income in 2018 was $24.7 million.

Ag industry leaders are skeptical that the program has put Montana farmers in the black, saying the trade dynamic, combined with bad weather, has made times tough for farmers.

“We’d rather have trade than a check,” said John Youngberg, executive vice president of the Montana Farm Bureau Federation. “It certainly isn’t enough money to make everybody whole, or close to whole.”

Walter Schweitzer, president of the Montana Farmers Union, echoed that concern. He also said he’s worried that disruptions caused by the trade war could hurt farmers in the long run, as foreign importers build relationships with new, non-American suppliers.

“It’s way easier to keep a customer than to get a customer back,” he said. “We will never get back the market we had with China."

Schweitzer also said that much of the program’s assistance went to corporate agriculture instead of family farms — a complaint echoed by economists and Democratic lawmakers.

“The actual distribution of the MFP payments flows to the largest and wealthiest farms that face the least risk of bankruptcy,” Montana State University economists Eric Belasco and Vincent Smith wrote in a Marketwatch opinion column last month.

“Throwing money to the largest farms may be good politics for some, but this misuse of taxpayer funds should worry us all,” they continued.

Belasco and Smith, both affiliated with the conservative American Enterprise Institute, found that the largest 20% of American farms by crop sales received 73% of Market Facilitation Program payments in 2018, and 69% in 2019.

A group of Democratic U.S. senators led by Debbie Stabenow of Michigan sent a letter to Perdue in November 2019 criticizing the program’s structure for failing to protect small farmers and providing assistance to foreign-owned companies. They singled out Brazilian-owned meatpacking company JBS, which operates a U.S. subsidiary, saying it had received $90 million through the program.

“The USDA does nothing to target assistance to those most vulnerable, including beginning farmers and small farms,” the Democratic senators wrote. “We are concerned that it will lead to further consolidation of family-owned farms and wipe out the next generation of farmers.”

Montana Democratic Sen. Jon Tester, who owns a farm in Chouteau County, wasn’t among the 17 senators who signed on to Stabenow’s letter. Like other farmers in the area, he has benefited from the program, receiving $2,957 in 2019, according to the USDA data.

“The fact is these MFP payments are not going to stop family farmers from going out of business, which is why this trade war should be brought to an end immediately,” Tester Press Secretary Roy Loewenstein said in an email.

“Jon knows firsthand that family farm agriculture is the backbone of this country, and he believes any resources focused on keeping family farms in business are well spent,” Loewenstein also said, acknowledging that “Jon shares concerns that a disproportionate amount of MFP resources went to corporate agriculture.”

The Trump administration has argued the program provides farmers with “much needed” assistance regardless. “While we continue to have confidence in the President’s negotiations with China,” Perdue said in a November release, “this money shows President Trump following through on his promise to help and support farmers as he continues to fight for fair market access.”

This story is published by Montana Free Press as part of the Long Streets Project. This work is supported in part by a grant from the Greater Montana Foundation, which encourages communication on issues, trends, and values of importance to Montanans. Reach Lead Reporter Eric Dietrich at edietrich@mtfp.org.

Student enrollment is up statewide, but dwindling numbers threaten to squeeze rural schools

Subsidies? Call it what it is:

It just goes to show that conservatives really don't believe in the free enterprise and market-based system. Hypocritical faux-socialists.