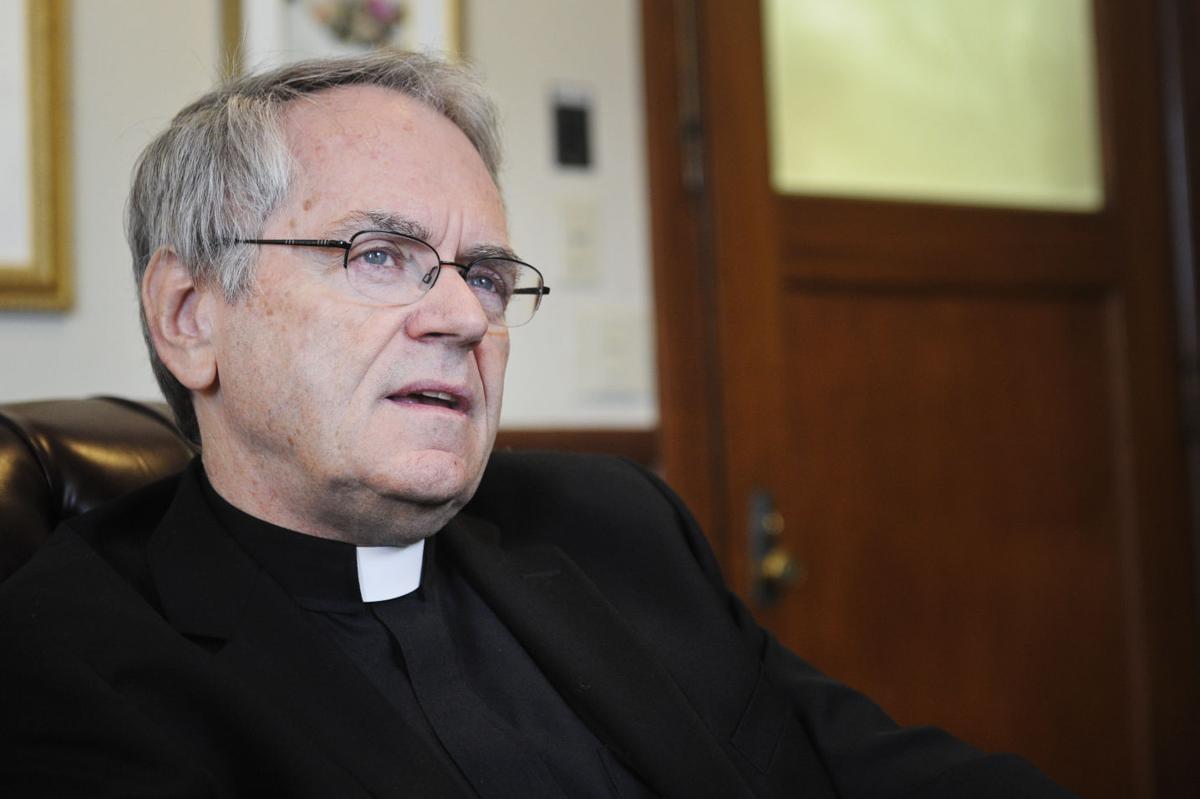 George Leo Thomas in his office at the Helena Diocese Chancery recently. Thomas held prayer services in seven Montana communities last year in the wake of a nearly $21 million settlement to resolve claims by about 380 people who accused the Diocese of Helena of sexual abuse. 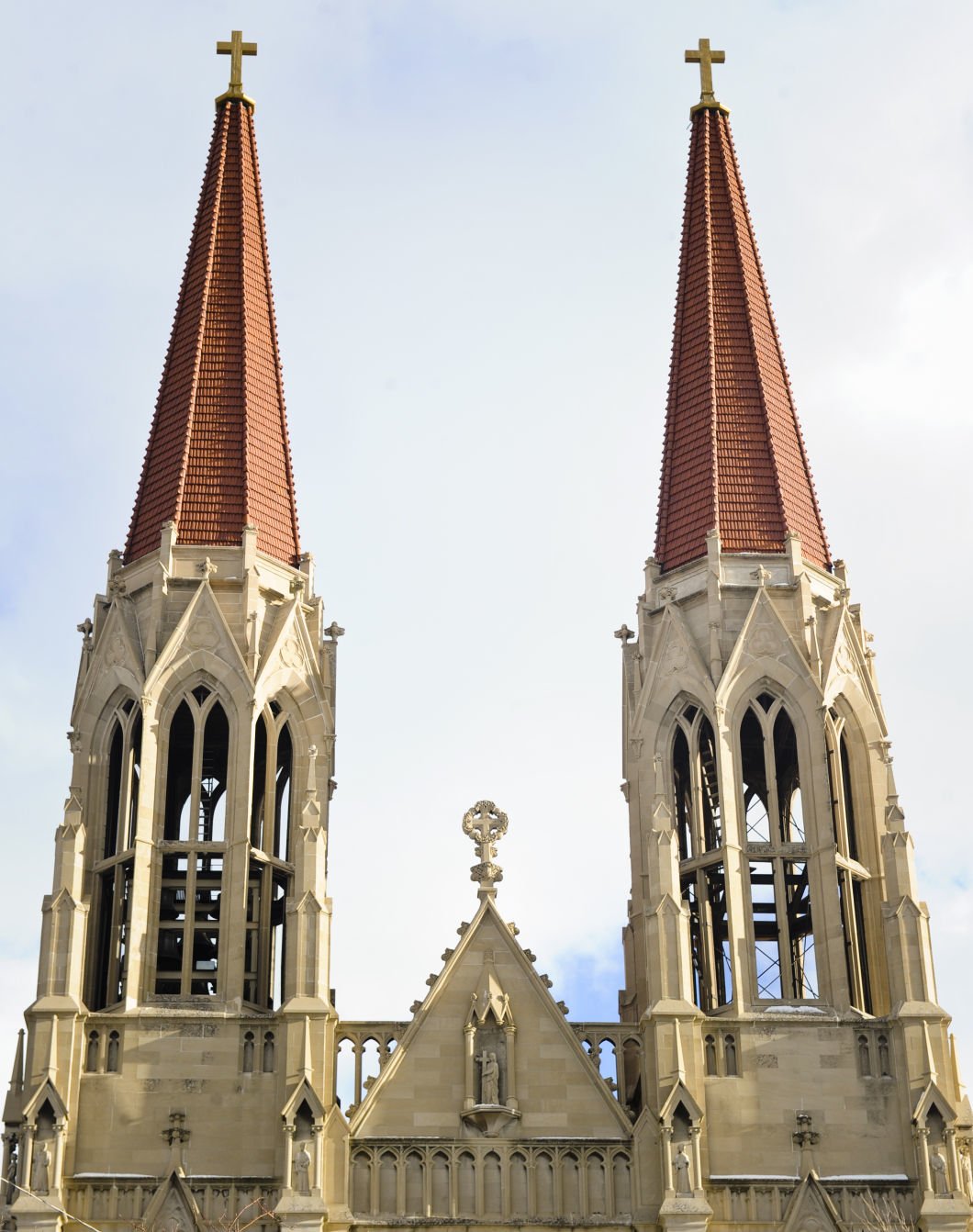 The Cathedral of St. Helena is pictured in this IR file photo.

Helena Bishop George Leo Thomas held prayer services in seven Montana communities last year in the wake of a nearly $21 million settlement to resolve claims by about 380 people who accused the Diocese of Helena of sexual abuse.

Thomas spoke at churches in Helena, Bozeman, Butte, Cut Bank, Columbia Falls, St. Ignatius and Missoula, according to a list of the outreach efforts.

The services held in these seven communities were part of numerous nonmonetary provisions in a Chapter 11 bankruptcy and reorganization plan for the diocese that was confirmed by the Coeur d’Alene, Idaho, bankruptcy court in March 2015.

Resolution of the bankruptcy and reorganization plan came after lawsuits had been filed in state court by two groups in 2011, according to The Associated Press.

Though the outreach was required, Thomas said “with or without that agreement, this would have been necessitated by pastoral care. I think that the church has the obligation for outreach and conciliation, but also to pray for those who were victimized or aggrieved. And so I would have done that with or without any agreement with the plaintiffs.”

During an interview in his office Friday, Thomas, who became the bishop here in 2004, said he believed that less than five hours was spent in court during the roughly 13 months between when the bankruptcy court filing was made by the church and its conclusion.

“But I do know that this could have been dragged on for years. Had we chosen to fight the whole thing and stay in court, we would have looked at 20 to 30 years of trials. And when you have claimants in this particular age bracket, they would never see any resolution. So pastoral care was the obvious solution,” he said.

“I think part of the difficulty is that our particular cases or the profile of our cases go back 30 to 60 years, so obviously there’s a good chunk of time, and all of the defendants in the diocese are long deceased so it’s more complicated that way. You don’t have live people defending their lives or their cases," he said.

“One of the approaches I took is that the victim survivors would be believed and respected,” Thomas said. “So I rejected the notion of going into this protracted defense mode in favor of pastoral care and outreach, and I also eschewed the idea of prolonged court battles where the only beneficiaries are attorneys.”

His statements echo those contained in a January 2014 news release where he said, “On behalf of the entire Diocese of Helena, I express my profound sorrow and sincere apologies to anyone who was abused by a priest, a sister or a lay church worker. No child should experience harm from anyone who serves in the church.”

He also noted in that news release none of those who have been credibly accused remain active in ministry.

It’s uncertain what affect the seven services across a portion of the state had on those who had sued the church.

Bryan G. Smith, an attorney with Tamaki Law in Washington state whose firm represented about 90 clients, said it’s unclear if anyone besides those who had identified themselves as victims would be able to say if the bishop’s outreach was helpful.

Few of his clients in this case would attend any church service, Smith said, adding “all of them lost faith in the church as a result of what happened to them.”

“You have a church that betrays them as children,” he continued and explained this created extreme turmoil in their lives for decades into adulthood.

“It comes late, the sincerity is called into question by the claimants themselves,” Smith said.

While saying he believed the bishop’s intentions were good, he didn’t know how many people might have been reached.

Thomas estimated 1,200 people attended the services. There were a few, perhaps a couple, of the victim-survivors at some of the services. Others saw five or perhaps six or seven, Thomas said.

Prayer for guidance to fill the void of inadequacy that he said he felt led him to ask victim-survivors for words that others would find helpful to provide healing.

“They were deeply touched by the prayer service. But also remembering it’s part of the healing journey. It’s not the final whistle stop," he said.

“I wanted to make it very clear that I felt just profoundly saddened by the damage that was inflicted on them, even in yesteryear,” the bishop said.

“The sexual abuse of children by either parents or clergy has just devastating results. Even though things happened 10, 20, 30, 40, 50 years ago, the pain is in the present tense.

“So it’s so important to acknowledge that and I wanted to have the opportunity in a public forum to express profound sadness and sorrow and apology for what they had undergone, albeit it years ago,” he continued.

“Secondly, the whole diocese suffered as a result of this,” Thomas said. “There was shame and embarrassment on the part of the laity across the whole diocese. So the healing journey was also directed toward them.”

Coeur d’Alene attorneys Lee James and Craig Vernon are also uncertain about the value of the services for those who said they were sexually abused by Catholic clergy.

Vernon and James represented roughly 270 clients, the majority of those involved in the diocese’s bankruptcy and reorganization plan settlement.

Vernon’s assessment on the effect of abuse decades ago for the majority of his clients, was that “there was probably less than 10 that remained Catholic, that identified themselves as Catholic.”

Part of the disconnect that occurs when a child is violated and their trust is violated, James said, is that they ultimately lose their faith and leave the church.

“If there are survivors that are still Catholic and therefore still care about that, I think anything is better than nothing,” Vernon said.

James shared that opinion and said expressing acceptance of responsibility, to say they’re sorry, “is good for the church hierarchy to do that. I don’t want to minimize that.”

The bankruptcy settlement plan and reorganization plan called for the diocese to pay $2 million, according to James Stang, an attorney with Pachulski Stang Ziehl & Jones, which has offices in Delaware, New York and California, who helped assemble the settlement.

Stang’s involvement was as a negotiator for the committee that considered the settlement and to assist in distributing the money.

This is the first installment in a two-part series. Tomorrow's story will address ways to prevent sex abuse in the church.

The Diocese of Helena has contracted with a development firm to build nearly 450,000 square feet of retail, commercial and hotel space near th…

The Independent Record's vaults are full of old photos of landmarks from around the Helena Valley. Every Thursday we take a walk back through …

POLSON -- When the Roman Catholic Diocese of Helena in April posted the names of 80 former employees, most of them priests and nuns, who had a…

MISSOULA -- Although hundreds of sexual abuse victims who sued the Roman Catholic Diocese of Helena stand to share a $20 million settlement, a…

'Slow road to recovery': Finances run thin for Diocese of Helena after approval of bankruptcy plan

An approved plan to exit bankruptcy doesn’t mean the Roman Catholic Diocese of Helena is on solid financial footing just yet, according to Chi…

Attorneys, author, bishop weigh in on how to prevent sex abuse by clergy

George Leo Thomas in his office at the Helena Diocese Chancery recently. Thomas held prayer services in seven Montana communities last year in the wake of a nearly $21 million settlement to resolve claims by about 380 people who accused the Diocese of Helena of sexual abuse.

The Cathedral of St. Helena is pictured in this IR file photo.