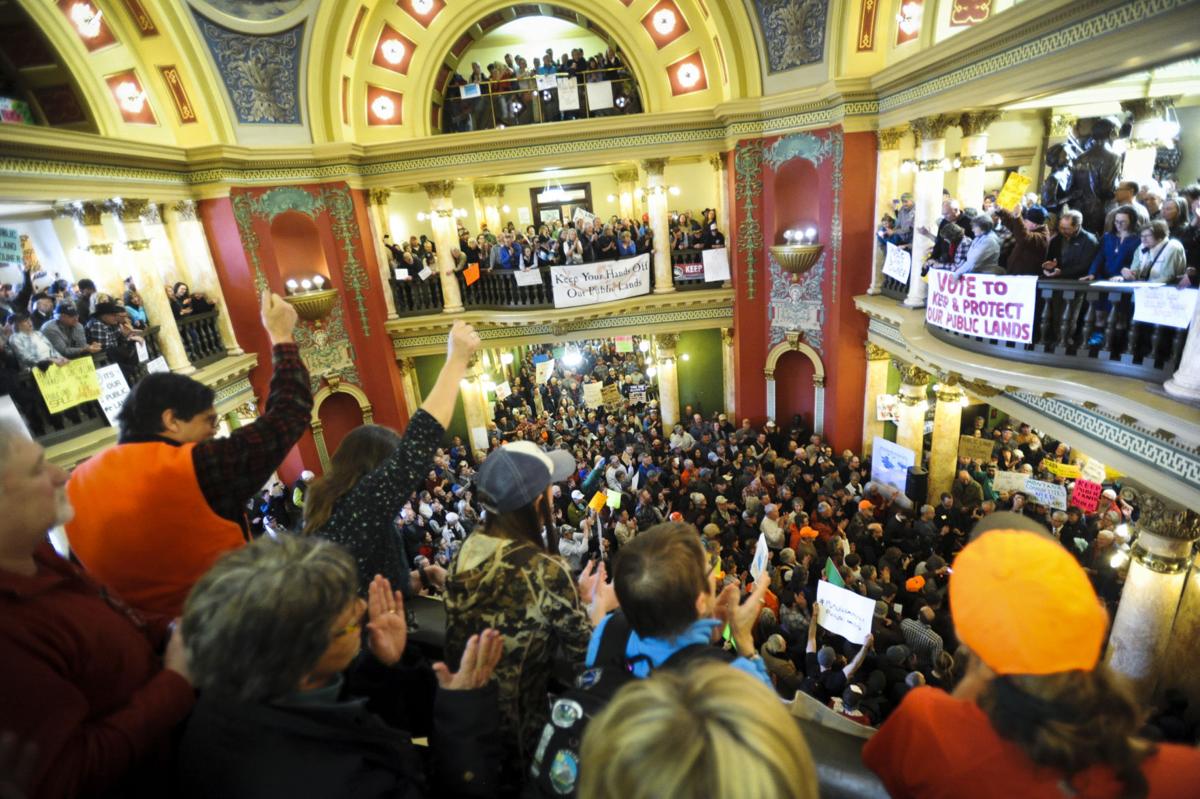 More than 1,000 demonstrators cheer during a public lands rally in the Capitol Rotunda Monday afternoon in Helena. 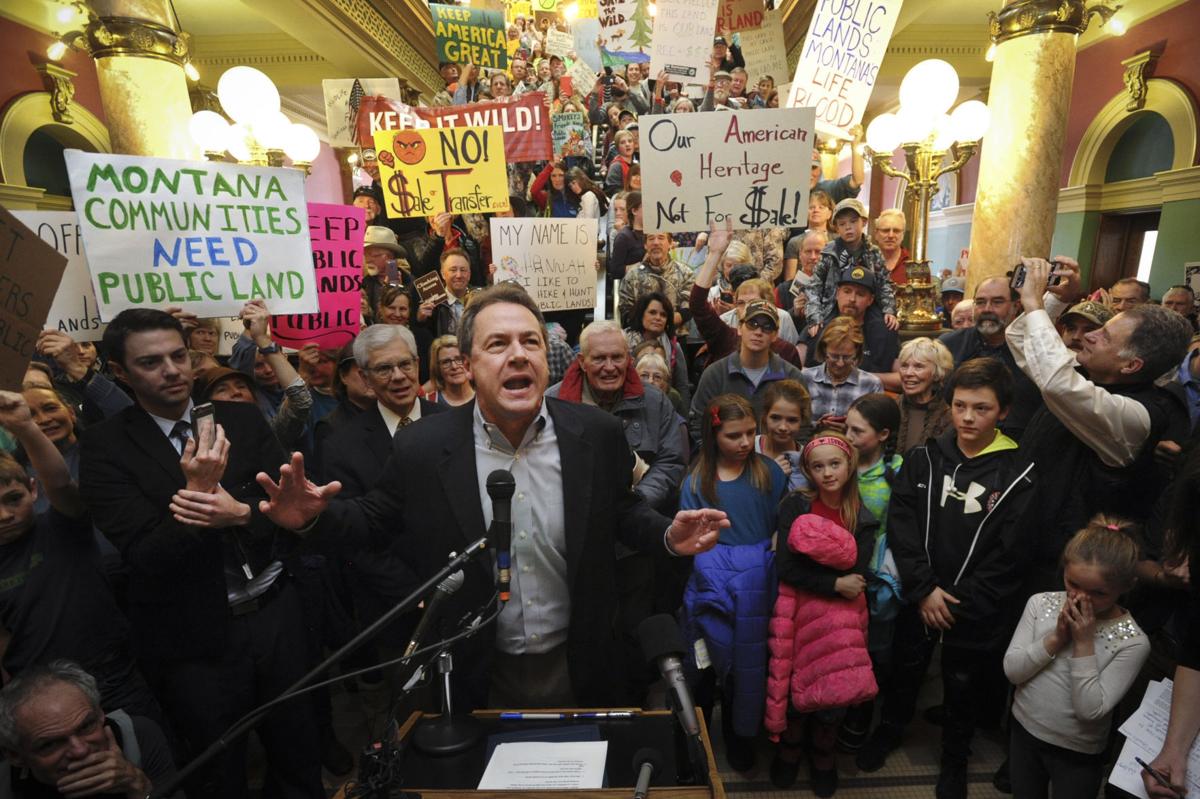 Gov. Steve Bullock takes the podium, citing public lands as an equalizer where anyone can go to recreate. 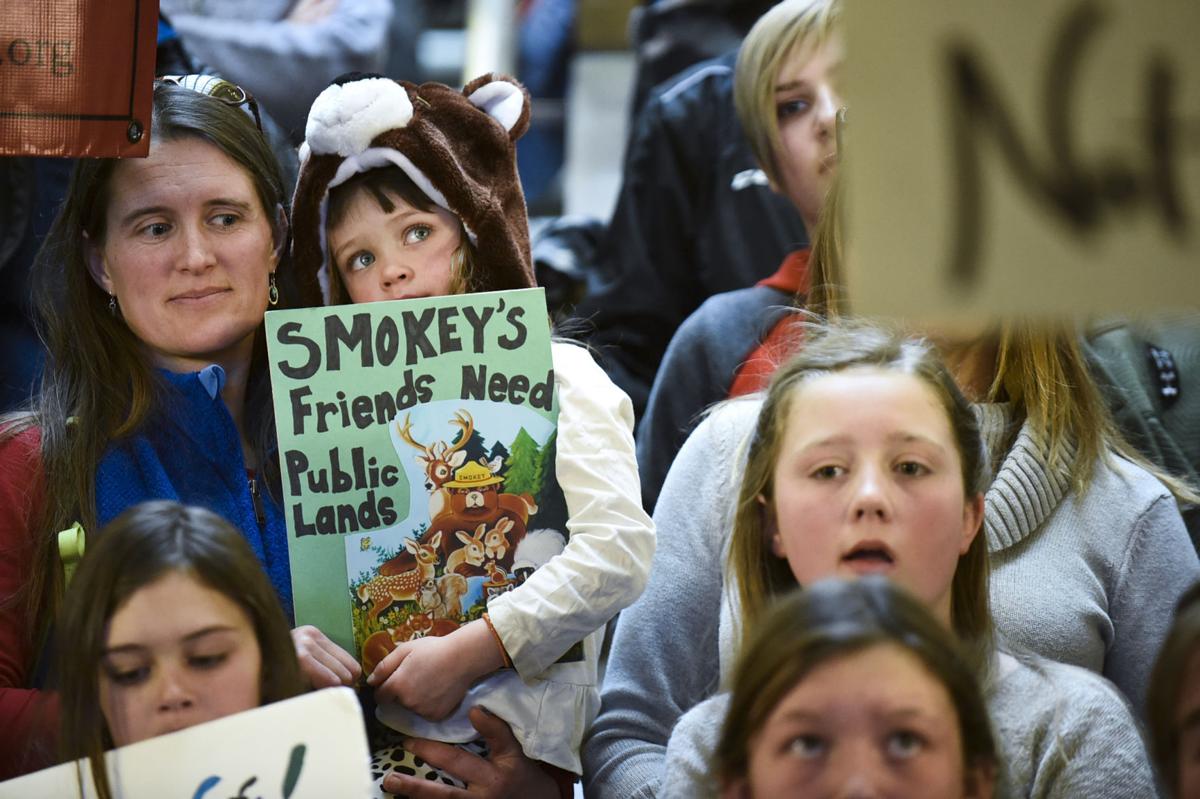 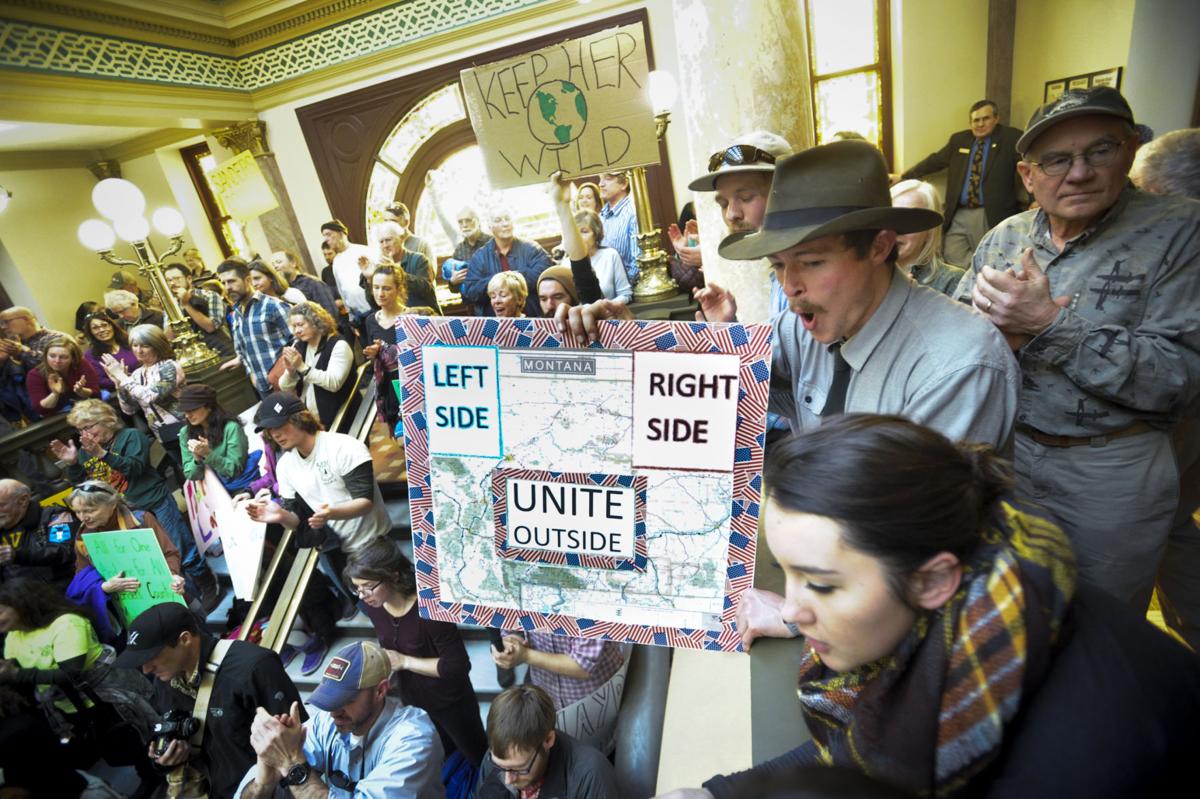 Demonstrators traveled from across the state to denounce land transfer efforts last month.

The Capitol Rotunda played host to a raucous crowd of public land advocates Monday, many traveling from across the state to denounce land transfer efforts while calling for improving access.

Organizers estimated more than 1,000 people packed the main rotunda floor and lined the balconies above, which was about double the attendance of a similar rally held during the 2015 legislative session. Many rally-goers loaded buses in Missoula, Billings and Bozeman to attend while smaller contingencies came from other locales, including about 40 from Sanders County.

They came to tell the Legislature in no uncertain terms that public lands are not just parcels on a map but define Montana as a state, and Montanans as a people.

“This heist is an assault on my lifeblood, not just my livelihood,” fly-fishing guide and Trout TV host Hilary Hutcheson told the crowd.

Hutcheson described her childhood near Glacier National Park, the chance for young eyes to experience outdoor adventure, and the hope of passing that legacy on to her daughters.

Mountaineer Conrad Anker noted the many people using public lands and paraphrased Duwamish Chief Seattle, who famously said land is not inherited from ancestors but borrowed from future generations.

Opponents of transferring federal lands to state ownership contend that states such as Montana would be unduly burdened by owning millions of additional acres, citing firefighting and other management costs. They say hamstrung states would be forced to sell off the lands, putting public lands in private ownership.

Losing those lands would mean a loss for many Montana businesses, said CEO of Simms fishing company K.C. Walsh.

“I always remind people how important Montana and Bozeman are to the success that Simms has had and how this really takes form in attracting great people who enjoy Montana’s outdoor value and everything our state has to offer,” he said.

Small transfers and sales of federal and state lands have long occurred for a variety of reasons. Principle opposition centers on transfers on much larger scales that would potentially take tens of millions of acres out of federal ownership.

Supporters of federal land transfer have argued that national policies result in closed roads while stifling timber and mineral industries. They say that under state control, the lands would be better managed and become an economic catalyst for rural communities.

Thomas contended that better management under state ownership would produce revenue while benefiting wildlife. He called the notion of a state sell-off of transferred lands “silly at best” and added “the state isn’t in the business of selling lands.”

Monday’s rally took on a personal tone at times, directed at one of the leading land transfer advocates in Montana and the West. Sen. Jennifer Fielder, R-Thompson Falls, has been an outspoken transfer proponent, and is sponsoring legislation to study federal land conveyance and to request conveyance, although both bills remain on hold.

Fielder is also CEO of American Lands Council, the chief organization pushing for large-scale transfers across the West.

Referring to Fielder’s district, Prickly Pear Land Trust Executive Director Mary Hollow said to cheers, “Let’s let them hear us down every hall in this building and all the way to Sanders County.”

The Sanders County contingency held up signs both directed at their senator and in support of maintaining federal land ownership. Trout Creek residents Daisy Carlsmith and Barb Tully made the five-hour journey by bus, standing at the top of the steps holding signs saying “Sanders County Supports Public Lands.”

“For me, it’s making sure that public lands are there for my grandchildren,” Tully said, adding that breathing clean air and access to mountain lakes are also major inspirations.

Carlsmith noted that transfer opponents are in the minority in their area -- Fielder won re-election with 67 percent of the vote -- but she wanted her values to be heard.

“We’re way outnumbered, but we had to come no matter who our representatives are, come and stand and say ‘no,’” she said.

A message left for Fielder was not returned in time for this story.

Also drawing ire from the crowd were recent actions on the federal level.

A rule change in the U.S. House of Representatives making land transfers easier by considering transfers budget-neutral also drew a strong response from conservation groups, many of them critical of Interior secretary nominee U.S. Rep. Ryan Zinke, R-Mont., for voting for the rules package.

Zinke has maintained his opposition to federal land transfer despite the vote.

Walsh mentioned Zinke’s nomination and support from several conservation and outdoor business groups, drawing a smattering of jeers from the crowd, until Walsh said, “If confirmed, we all need to hold him accountable for his public statements,” which was met with resounding cheers.

U.S. Sen. Jon Tester, D-Mont., phoned in to encourage rally-goers to make their voices heard, and he promised to oppose Chaffetz and other efforts to sell or transfer federal lands.

Gov. Steve Bullock took the podium, citing public lands as an equalizer where anyone can go to recreate. Public lands are also a major draw for tourism and 64,000 Montana jobs.

“Look, this ain’t about politics, whether you're Democrat, Republican, Libertarian or vegetarian, these lands belong to you.”

While opposition to the transfer of federal lands headlined Monday’s rally at the Capitol, speakers also encouraged legislators to free up funding for acquisition of new lands.

Montana Fish, Wildlife and Parks’ authority to purchase land was halted last session by lawmakers opposed to increasing state land ownership. Habitat Montana, a hunting-license funded program historically used for land acquisition and easements, has continued to accumulate millions of dollars despite the no purchase restriction.

Now with $10.1 million in the Habitat Montana account, conservation groups, the governor and some lawmakers want that authority returned.

“It’s time that the Legislature lift the limitations on Habitat Montana programs so sportsmen dollars can continue to create and preserve places to hike, fish, hunt and recreate,” Gov. Steve Bullock told the crowd.

Photos: Over 1,000 rally in support of public lands

The Capitol rotunda played host to a raucous crowd of public land advocates Monday, many who traveled from across the state to denounce land t…

MISSOULA -- Did you hear about the bill to stop requiring “No Trespassing” warnings on Montana fences?

More than 1,000 demonstrators cheer during a public lands rally in the Capitol Rotunda Monday afternoon in Helena.

Gov. Steve Bullock takes the podium, citing public lands as an equalizer where anyone can go to recreate.

Demonstrators traveled from across the state to denounce land transfer efforts last month.