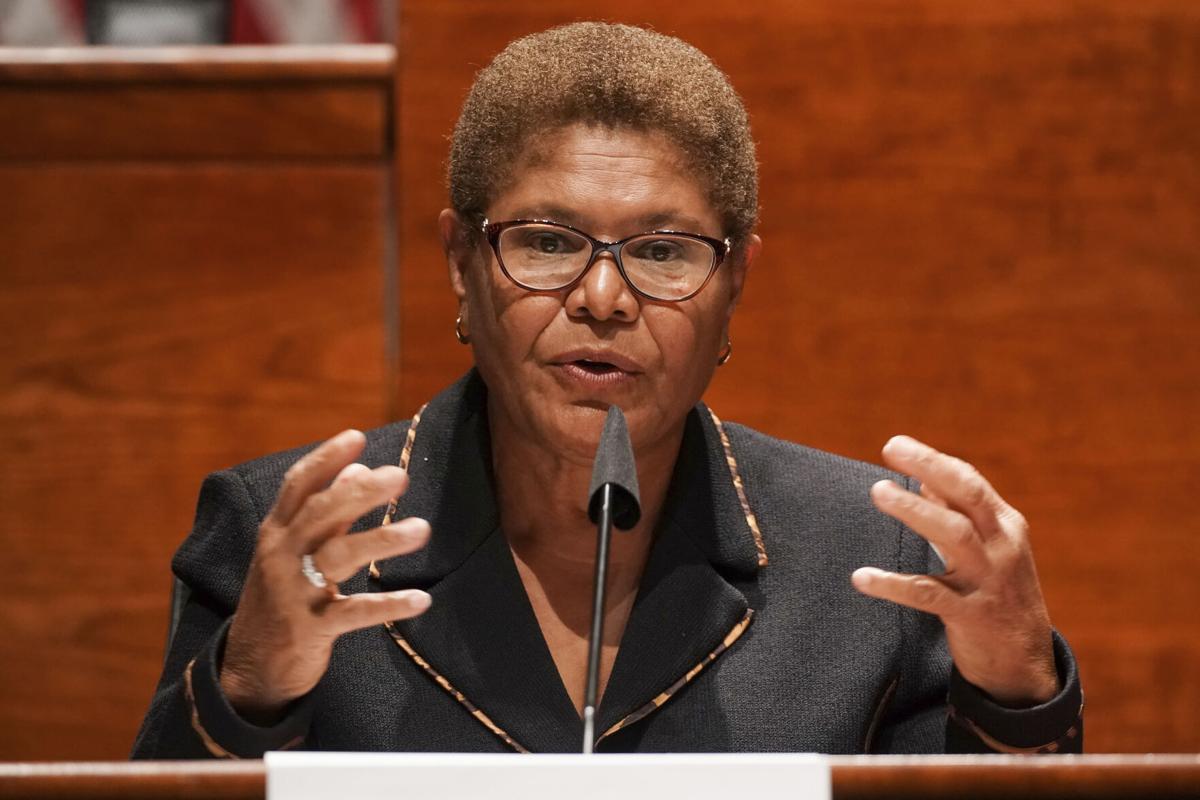 Rep. Karen Bass, D-Calif., speaks during a House Judiciary Committee markup of the Justice in Policing Act of 2020 on Capitol Hill in Washington, Wednesday, June 17, 2020. (Greg Nash/Pool via AP) 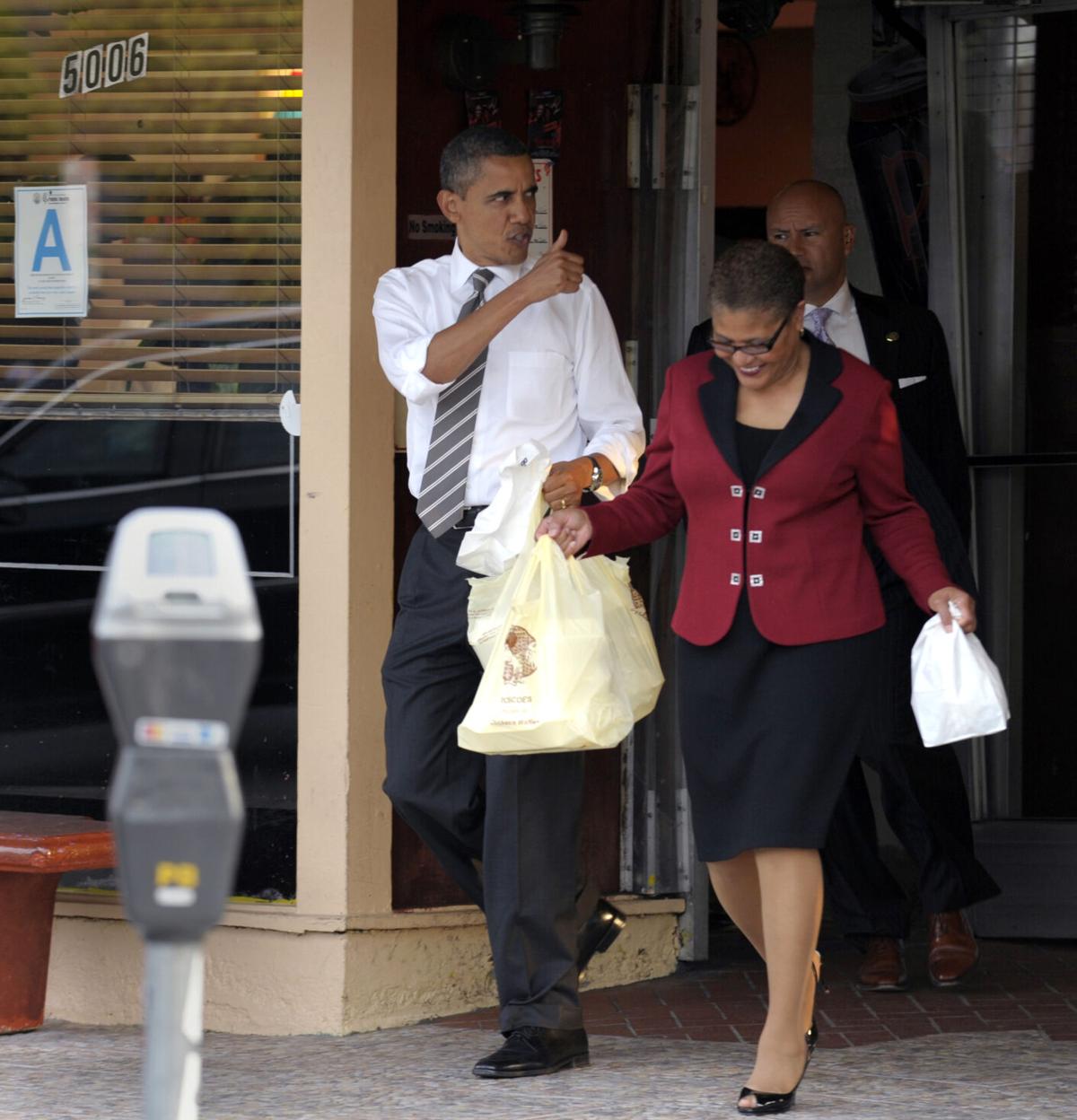 President Barack Obama gives a thumbs up as he walks out of Roscoe's House of Chicken and Waffles in Los Angeles, Monday, Oct. 24, 2011, with Rep. Karen Bass, D-Calif., after ordering a snack. Obama is on a three-day trip to the West Coast. (AP Photo/Susan Walsh)

SACRAMENTO, Calif. (AP) — California's leaders were deadlocked and on the verge of financial catastrophe in 2008. Five negotiators, including Republican Gov. Arnold Schwarzenegger, couldn't agree on a budget that would guide the nation's most populous state through the Great Recession.

Enter Karen Bass, who became Assembly speaker that May, the first Black woman to hold the role. She shifted the tone of the talks, helping the group find common ground.

"When Karen came into the Big 5, everything changed," said Mike Villines, then the Republican Assembly leader. "We started to make little progress on little things, and it led to bigger progress."

A dozen years later, the bridge-building, unassuming style that colleagues say made Bass an effective leader in Sacramento is among the reasons the current California congresswoman has emerged as a leading contender to become Joe Biden's running mate. The presumptive Democratic presidential nominee appeared with Bass for the first time at a fundraiser on Thursday. He plans to make a pick next week.

"I have historically, for the last four or five decades, focused on building coalitions and building bridges between ethnic groups, between political ideologies," she told The Associated Press this week. "I'm a very goal-driven person; I am focused on getting stuff done. And I am willing to work with whoever, whenever, however."

Her low-key approach was evident as early as 1990, when she launched a nonprofit in Los Angeles. One of the organization's tenets was "no celebrity-style leadership." Unlike some of her competitors for vice president, including California Sen. Kamala Harris, Bass hasn't sought national office and has no stated presidential aspirations.

But that means she is lesser known to voters, lacks a major donor base and hasn't faced the scrutiny of a national campaign. A past comment about former Cuban dictator Fidel Castro could be troublesome to Hispanic voters in the key swing state of Florida.

Still, she brings plenty of political cachet. She left Sacramento for Congress in 2010 and now chairs the Congressional Black Caucus. After George Floyd's killing by police, she led Democratic efforts on legislation to overhaul law enforcement, a push that prompted Biden's team to take her more seriously as a potential running mate.

"She got high marks for managing that deal, but she's managed similar bills in the past," said Democratic Rep. Jim Clyburn of South Carolina, a former CBC chair and Biden ally. "She has a resume that I think is good to be considered."

Bass, 66, wouldn't discuss her vetting. But Fabian Nunez, a former state Assembly speaker and close friend of Bass', said she's been "properly vetted." He supported Bass as his successor in the Legislature because the difficult budget talks required a "less ideological" leader who could bring people together, qualities the country needs today.

"The country needs healers," he said.

Before entering politics, Bass worked in a Los Angeles emergency room, where she saw the havoc brought by the crack cocaine epidemic and police crackdown that fueled the arrests of young men of color. She created the Community Coalition, a nonprofit aimed at treating gang violence and the drug trade as public health issues.

After surveying 30,000 residents, the organizers learned that liquor stores were a surprising source of the problem, providing a haven for drug deals and other illicit behavior. They helped shut down 150 stores.

When Los Angeles City Council member Marqueece Harris-Dawson started working at the coalition in 1995 at age 25, he didn't know Bass. But he knew the liquor stores he'd been told to avoid his whole life were closed.

"It was very meaningful for me because you hear a lot of political talk, particularly post-1992," he said, referring to the year of the Los Angeles riots that followed the beating of Rodney King by white police officers. "Those things never get done. Here was Karen, quietly setting up goals (and) knocking them down."

Meanwhile, Biden was passing the 1994 bill that furthered the era's tough-on-crime policies. He'd also supported stricter sentences for crack cocaine compared to powder, which disproportionately hurt minorities. Bass said she was opposed to the 1994 bill but did not criticize Biden.

In the state Legislature, she prioritized child welfare and foster care legislation before winning the speakership. As the only woman in leadership, she changed the male-dominated culture.

Schwarzenegger often invited lawmakers to negotiate in a cigar tent, but Bass told the men there would be no smoking with her inside. Among the Republicans she was close with in Sacramento: Kevin McCarthy, who is now the top Republican in the U.S. House.

Dolores Huerta, the California civil rights leader and farm worker activist, said Bass is someone who can repair the nation's damaged institutions. She'd be a vice president who can adeptly handle the work at home as Biden works on repairing international relationships, Huerta said.

"He's going to need somebody at his side that can really help him with things here at the domestic level," said Huerta, who endorsed Harris in the Democratic presidential primary.

Bass' allies say she has no baggage, but she will face fresh scrutiny if Biden chooses her.

Fernand Amandi, a Democratic consultant and Florida pollster who specializes in the Hispanic vote, said Bass could alienate Cuban voters because of a 2016 statement she made when Castro died. She said, "The passing of Comandante en Jefe is a great loss to the people of Cuba."

Critics say the remarks were too deferential to a brutal dictator, and Amandi said it will allow Republicans to paint Bass as a radical socialist.

She traveled to Cuba on three expense-paid trips in Congress, including trips to learn about the Cuban health care system and cultural exchanges, all approved by the House Ethics Committee. She first traveled to Cuba in the 1970s as a young activist.

"Let's say you have a wavering Cuban American Trump supporter now who may be on the fence, who's just looking for a reason to stick with Trump," Amandi said. "With Karen Bass' comments about Fidel Castro, it will be served up on a silver platter."

Bass has since said she better understands the sensitivity of her comment after speaking with Florida colleagues, and she believes she can still reach out to Cuban voters in the state, where the coronavirus is a top issue.

"I absolutely feel that there is a pathway that I would not be a liability in whatever role I play on the campaign," she said. "And, you know, Florida is also a very big state."

Photos from the career of Karen Bass

A federal appeals court on Friday overturned the death sentence of Dzhokhar Tsarnaev, the man convicted in the 2013 Boston Marathon bombing.

Herman Cain, the former presidential candidate and former CEO of Godfather's Pizza, has died from coronavirus, according to an obituary sent from his verified Twitter account.

The second surge of confirmed cases appears to be leveling off, while the Senate adjourned without a deal to extend unemployment benefits. Get the latest virus developments.

PORTLAND, Ore. (AP) — Federal agents who have clashed with protesters in Portland, Oregon, will begin a “phased withdrawal” from the city, Gov. Kate Brown said Wednesday.

Democrats slammed the add-ons, and Sen. Mitch McConnell said the final package should not stray from the coronavirus response. Get the latest.

This is the world's only known albino orangutan

August Has Some Possible Great Deals! Here Are Just a Few...

August Has Some Possible Great Deals! Here Are Just a Few...

Rep. Karen Bass, D-Calif., speaks during a House Judiciary Committee markup of the Justice in Policing Act of 2020 on Capitol Hill in Washington, Wednesday, June 17, 2020. (Greg Nash/Pool via AP) 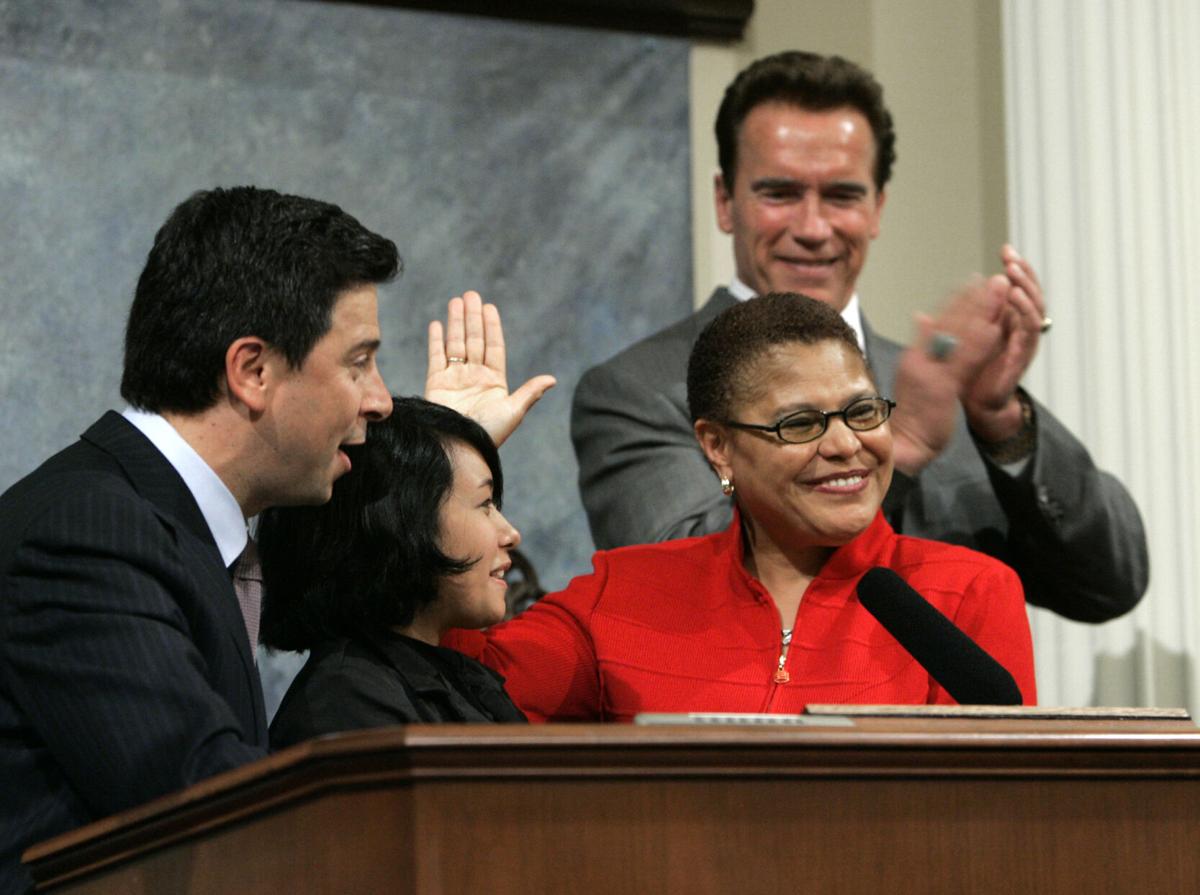 Assemblywoman Karen Bass, D-Los Angeles, second from right, smiles as she is sworn in as Speaker of the California State Assembly by her predecessor, Assemblyman Fabian Nunez, of Los Angeles, left, as Gov. Arnold Schwarzenegger applauds during ceremonies at the Capitol in Sacramento, Calif., Tuesday, May 13, 2008. (AP Photo/Rich Pedroncelli)

President Barack Obama gives a thumbs up as he walks out of Roscoe's House of Chicken and Waffles in Los Angeles, Monday, Oct. 24, 2011, with Rep. Karen Bass, D-Calif., after ordering a snack. Obama is on a three-day trip to the West Coast. (AP Photo/Susan Walsh) 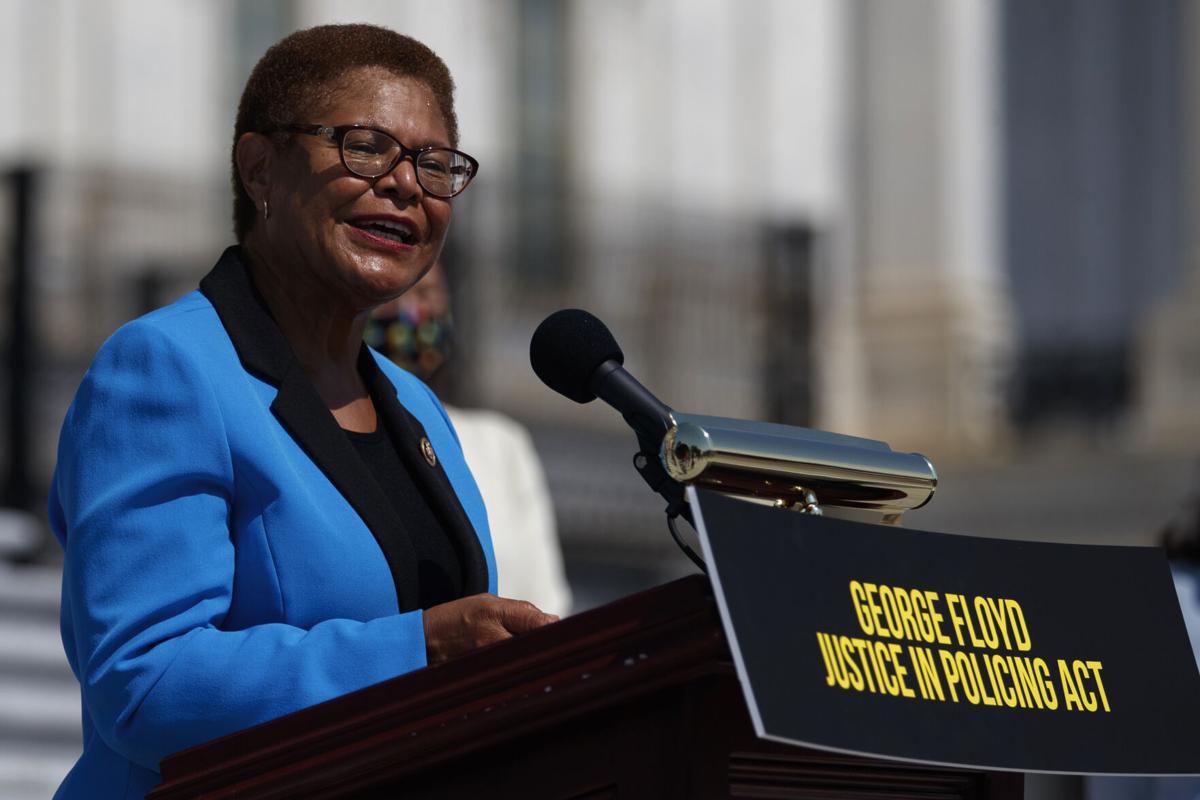 In this June 25, 2020, file photo Rep. Karen Bass, D-Calif., speaks during a news conference on the House East Front Steps on Capitol Hill in Washington ahead of the House vote on the George Floyd Justice in Policing Act of 2020. (AP Photo/Carolyn Kaster, File)