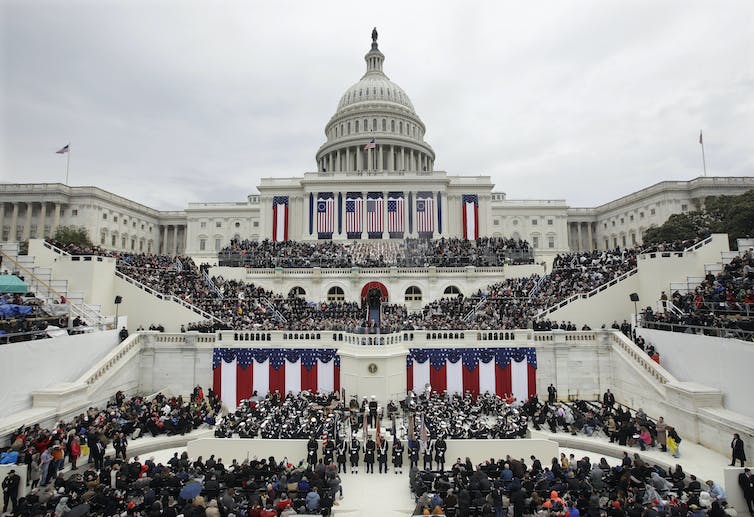 As one president’s term ends and another begins, there is a ceremony. Its importance is one of symbolism rather than substance. The Constitution is clear: On Jan. 20, there will be a transfer of power. There is no mention of an inauguration.

By definition, ritual acts have no direct effect on the world. A ceremonial event is one that symbolically affirms something that happens by other, more direct means. In this case, the election – not the inauguration – makes the president, although an oath is required before exercising his power.

Nonetheless, ceremonies matter. Having spent two decades studying ritual, I can attest to that. So can the recent history of inaugurations: In 2009, Barack Obama misplaced one word when reciting the presidential oath of office. As a result, he decided to retake the oath the next day. And in 2017, Donald Trump insisted that his inauguration was attended by a record-setting crowd, even as everyone’s eyes saw otherwise. He saw the size of the attendance as a measure of his legitimacy. 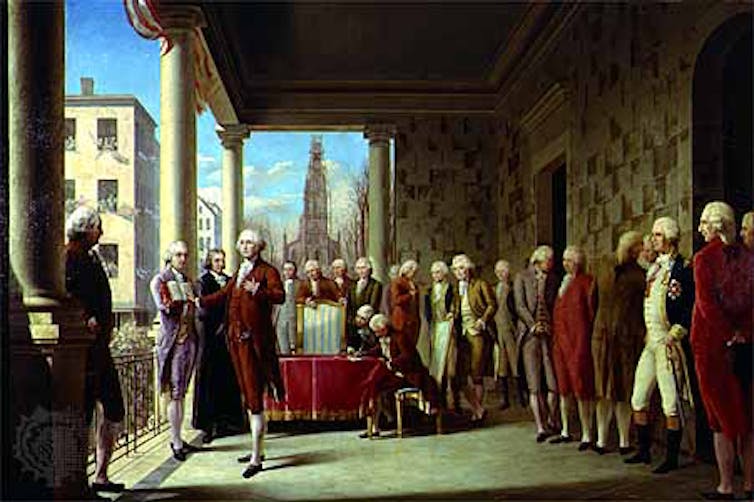 The first inauguration of a president of the United States, George Washington, happened in New York City on April 30, 1789. Ramon de Elorriaga, via Wikimedia Commons

Throughout history, all human societies have used rituals to mark major events and transitions: personal landmarks like birthdays and weddings, group accomplishments such as graduations, and government transitions of power. Those ceremonies send signals that command our attention and strengthen the perceived importance of those moments.

Ritual actions involve formality, precision and repetition. A priest must wear a special garment; a prayer must be uttered word for word; and a mantra might be recited 108 times. These features make rituals appear similar to more goal-directed actions: A judge banging a gavel resembles a carpenter hammering a nail. Due to these similarities, our brains assign those acts actual power.

This is what my collaborators and I found in a soon-to-be-published study. We showed people videos of basketball players shooting free throws and asked them to predict the outcome of each shot. Half of those videos showed the players performing a brief ritual, such as kissing the ball or touching their shoes before shooting. The other half did not include any ritual.

Participants predicted that the ritualized shots would be more successful. They were not. But their minds unconsciously tied the arbitrary actions preceding those shots with their expectations for the outcome. 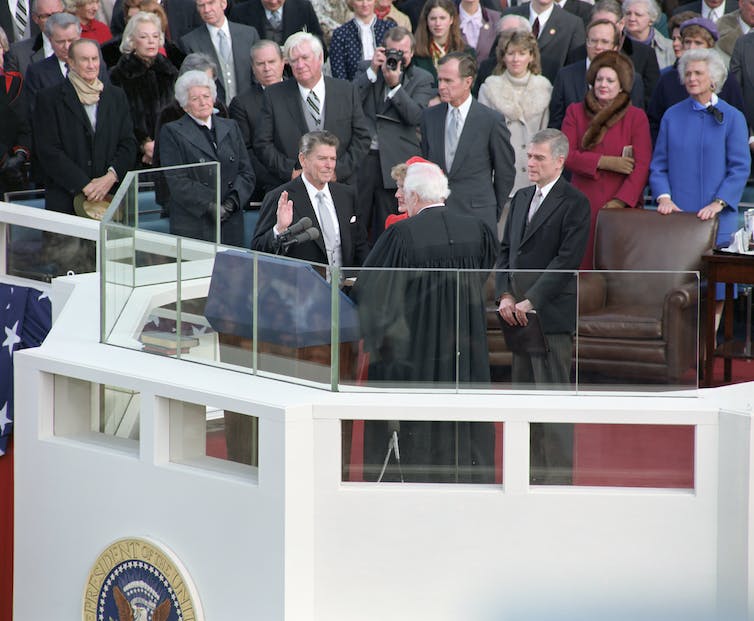 Collective rituals carry the weight of tradition, which gives them an aura of historical continuity and legitimacy. Even though they do change from time to time, they are often perceived as unchanged and unchangeable.

Public ceremonies like inaugurations are wrapped in pageantry. They involve music, banners, speeches and more – the more important the moment, the more extravagant the ceremony. When we attend a ritual loaded with splendor, it is as if a little voice inside our brain is telling us: “Pay attention, because something important and meaningful is happening.”

When Jan. 20 falls on a Sunday, the inauguration is held on the following day. In that case, the oath is administered twice: privately on the Sunday, when the actual transfer of power takes place, and publicly again on Monday, for ceremonial reasons.

The exuberance and theatricality transforms what could be a mundane, ordinary moment into something memorable and noteworthy. 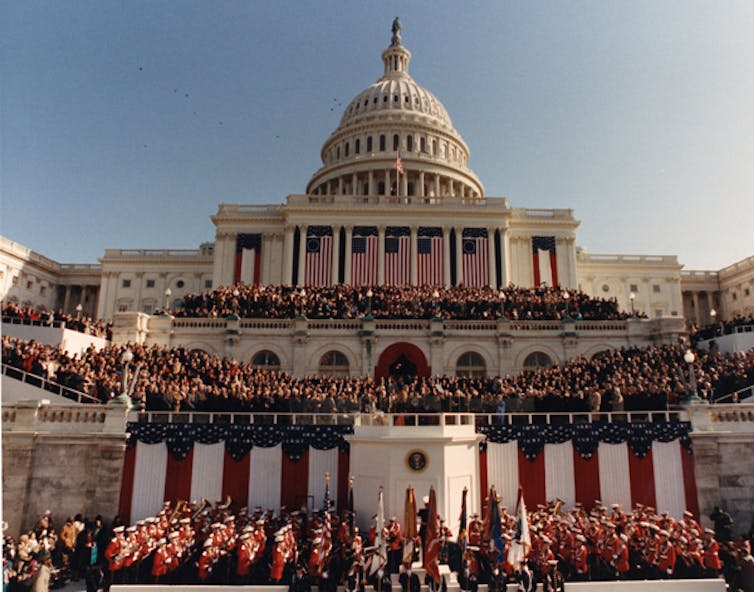 Ceremonies speak directly to some of our basic instincts, triggering intuitions about their efficacy, symbolism and importance. Human institutions have adapted to reflect – and harness – those instincts to strengthen the perceived importance of our social institutions and the unity of civil society.

This is, in fact, why heads of state who are not popularly elected tend to hold more flamboyant public ceremonies than their democratically chosen counterparts. Even in countries where kings and queens are powerless, their enthronements are celebrated with far more splendor than the inaugurations of elected leaders.

But there is a flip side to this. Populist leaders, who are successful thanks to their ability to capitalize on people’s instincts, are almost always fond of ritual exuberance. For his inauguration, Donald Trump reportedly requested a military march, complete with tanks, missile launchers and jet fighters.

The Department of Defense apparently declined most of these requests, out of worry that the inauguration would look like a totalitarian power display. But many of Trump’s supporters liked the idea precisely for that reason.

When Trump finally managed to get tanks in the streets for a July Fourth parade in 2019, one of his fans wondered: “If Korea can have a military parade, why can’t we?”

Due to the COVID-19 pandemic, Joe Biden’s inauguration will be scaled down and mostly virtual. Donald Trump is not planning to attend, thereby missing the opportunity to see a smaller inauguration crowd than his own.

Dimitris Xygalatas does not work for, consult, own shares in or receive funding from any company or organization that would benefit from this article, and has disclosed no relevant affiliations beyond their academic appointment.

Deep knowledge, daily. Sign up for The Conversation’s newsletter.

Democrats' sweeping bill could change how we vote

The stakes are monumental, with potential to shape election outcomes for years to come. It also tests how hard President Joe Biden and his party are willing to fight for their priorities.

Neera Tanden's withdrawal over controversial tweets marks the first high-profile defeat of one of Biden's nominees. Eleven of 23 Cabinet nominees requiring Senate approval have been confirmed.

A key Senate committee on Thursday approved the nomination of New Mexico Rep. Deb Haaland to be interior secretary, clearing the way for a Senate vote that is likely to make her the first Native American to lead a Cabinet agency.

PHOENIX (AP) — Two Arizona residents are suing the cities of Phoenix and Scottsdale over the development of the San Francisco Giants' year-round training facility in Papago Park.

The Senate voted Monday to confirm Miguel Cardona as education secretary, clearing his way to lead President Joe Biden’s effort to reopen the nation’s schools amid the coronavirus pandemic.

CARSON CITY, Nev. (AP) — The rural Nevada county where a blockchain technology firm wants to form a jurisdiction with governmental powers passed a resolution against ceding control over local decision-making but left the door open to working with the company on its bid to build a futuristic smart city in the desert.

LANSING, Mich. (AP) — Gov. Gretchen Whitmer on Tuesday announced the further loosening of Michigan's coronavirus restrictions, easing capacity limits in restaurants and a host of other businesses while also allowing for larger indoor and outdoor gatherings.

ANNAPOLIS, Md. (AP) — The Maryland General Assembly gave final approval Friday to expanding a state tax credit for low-income workers to include immigrants, including some living in the country illegally who work and pay taxes in the state.

WASHINGTON (AP) — Sen. Mitt Romney said Monday that he was knocked unconscious in a fall over the weekend, but he was “doing better.”