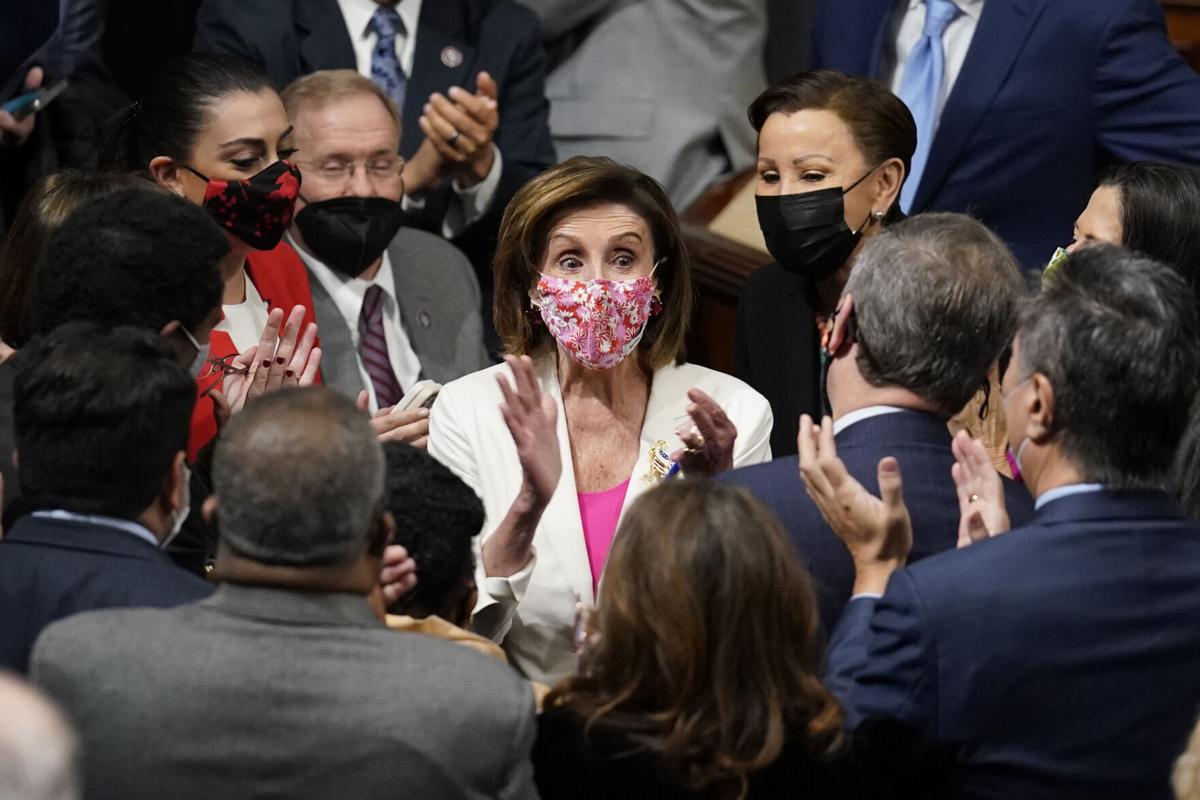 Speaker of the House Nancy Pelosi, D-Calif., celebrates the House passage of President Joe Biden's expansive social and environment bill with other Democrats in the House Chamber, at the Capitol in Washington, Friday, Nov. 19, 2021. 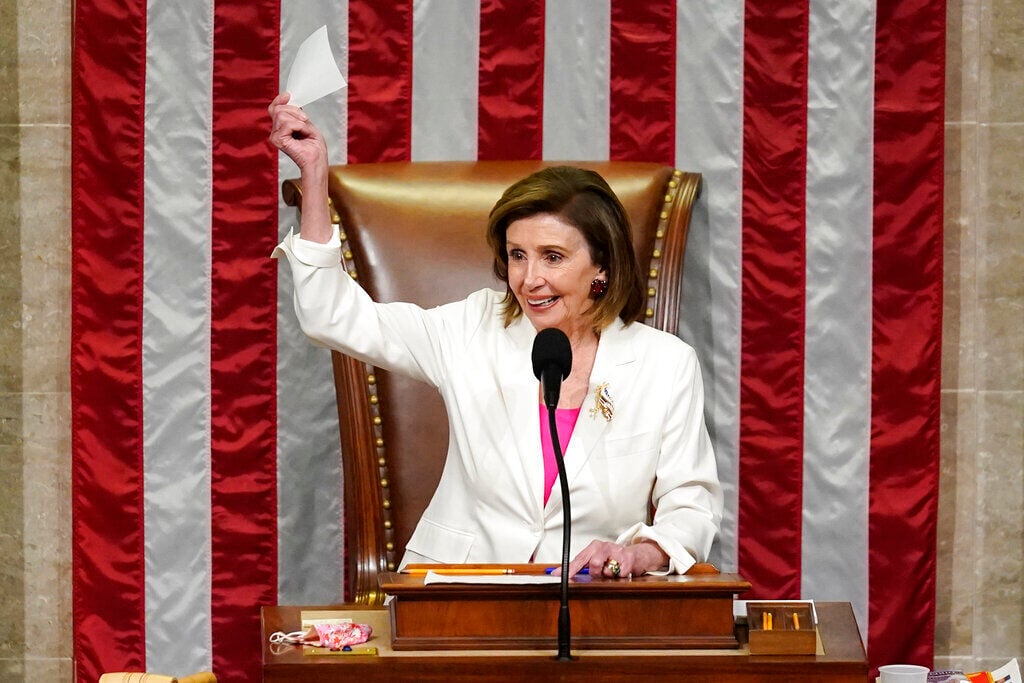 WASHINGTON (AP) — Democrats brushed aside months-long divisions and pushed their expansive social and environment bill through a sharply divided House on Friday, as President Joe Biden and his party moved closer to capitalizing on their control of government by funneling its resources toward their top domestic priorities.

The House approved the legislation by a near party-line 220-213 vote, sending the measure to a Senate where cost-cutting demands by moderate Sen. Joe Manchin, D-W.Va., and that chamber’s strict rules seem certain to force significant changes. That will prompt fresh disputes between party centrists and progressives that will likely take weeks to resolve.

Even so, House passage marked a watershed for a measure remarkable for the breadth and depth of the changes it would make in federal policies. Wrapped into one bill are far-reaching changes in taxation, health care, energy, climate change, family services, education and housing. That shows the Democrats’ desire to achieve their goals while controlling the White House and Congress — a dominance that could well end after next year’s midterm elections.

The House vote also gave Biden a momentary taste of victory, and probably relief, during perhaps the rockiest period of his presidency. He’s been battered by falling approval numbers in polls, reflecting voters’ concerns over inflation, gridlocked supply chains and the persistent coronavirus pandemic, leaving Democrats worried that their legislative efforts are not breaking through to voters.

“If you are a parent, a senior, a child, a worker, if you're an American, this bill's for you,” said House Speaker Nancy Pelosi, D-Calif., underscoring Democrats' efforts to impress the public. Read the full story here:

What's out of the bill

The local sheriff said he didn't know why the boy's father bought the gun. Several students from the shooting remain in critical condition, including a 14-year-old on ventilator. Here's the latest.

Authorities say eight people were wounded in an attack at a Michigan high school in which three students were killed.

A prosecutor filed involuntary manslaughter charges against the parents of a teen accused of killing four students and wounding seven others in Michigan.

The parents of a teen accused of killing four students in a shooting at a Michigan school were found hiding in a Detroit building early Saturday, hours after a prosecutor filed involuntary manslaughter charges against them.

Omicron-stricken South Africa may be a glimpse into the future

New COVID-19 cases in South Africa have burgeoned from about 200 a day in mid-November to more than 16,000 on Friday. Here are the latest updates on the omicron variant.

US sees first case of omicron variant detected in California

The United States' first confirmed case of the omicron coronavirus variant has been identified in California, according to a source familiar.

Ethan Crumbley will be tried as an adult and faces murder, assault and weapons charges. He will also face one count of terrorism causing death, a rare charge for a school shooting.

CDC backs booster shot for all adults due to omicron variant

The CDC strengthened its COVID-19 booster shot recommendation to include all adults as the new omicron variant spreads.

Omicron in at least 5 US states; Congress averts shutdown; plus more top news

Things to know today: WHO says measures used against the delta variant should also work for omicron; Congress averted a shutdown. Get caught up.

Speaker of the House Nancy Pelosi, D-Calif., celebrates the House passage of President Joe Biden's expansive social and environment bill with other Democrats in the House Chamber, at the Capitol in Washington, Friday, Nov. 19, 2021.