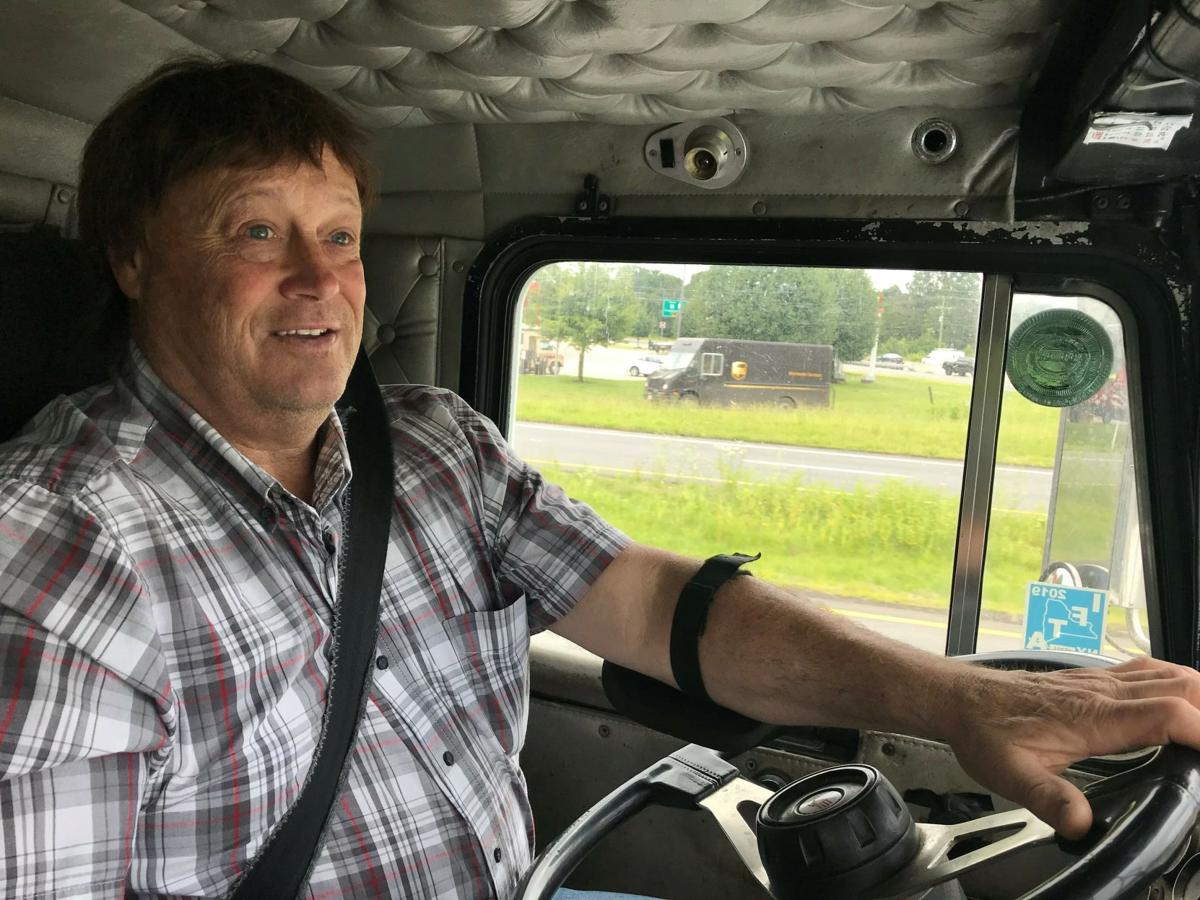 Truck driver Terry Button drives his truck near Opal, Va., Thursday, June 13, 2019. The Transportation Department is poised to relax the federal regulations that govern how many hours a day truckers can be behind the wheel, a long sought goal of the trucking industry. (AP Photo/Tom Sampson) 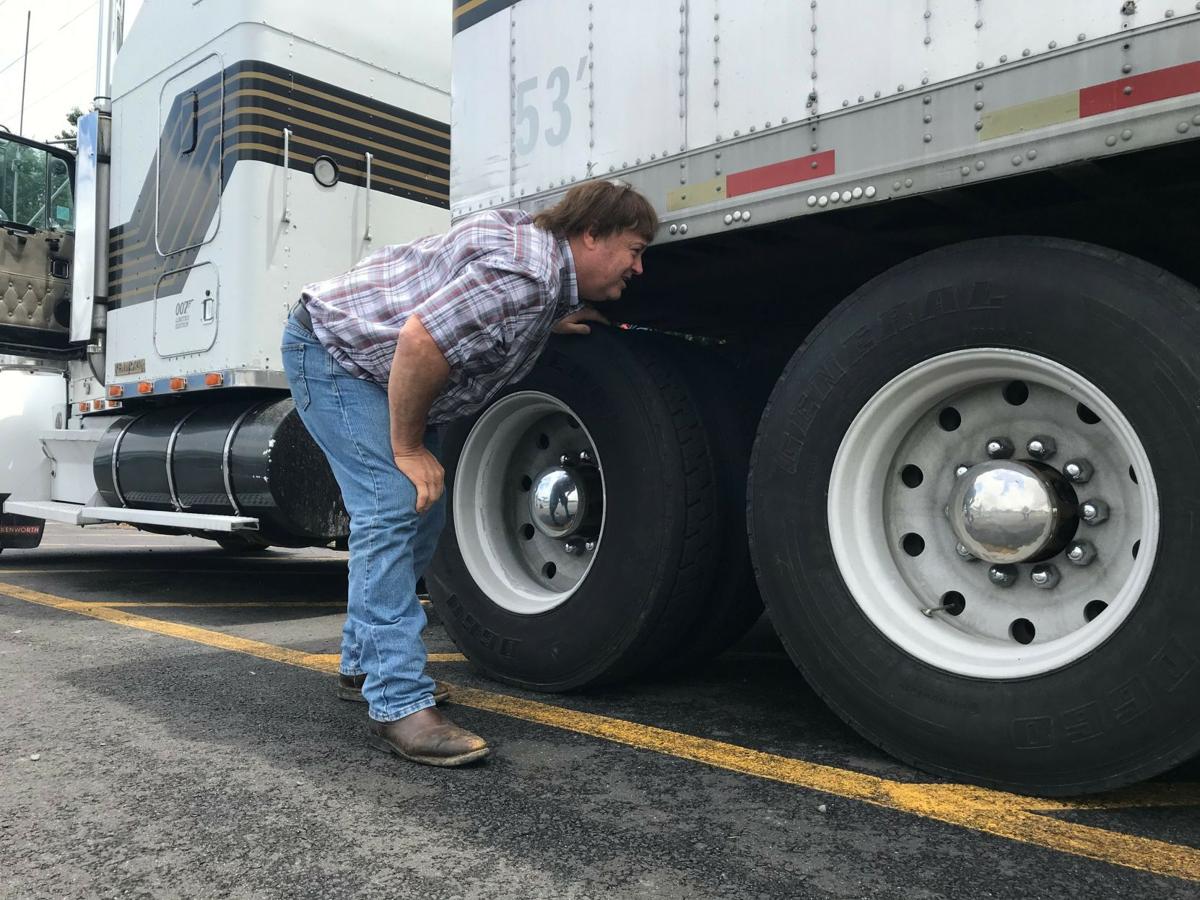 Truck driver Terry Button looks over his trailer during at stop in Opal, Va., Thursday, June 13, 2019. The Transportation Department is poised to relax the federal regulations that govern how many hours a day truckers can be behind the wheel, a long sought goal of the trucking industry. (AP Photo/Tom Sampson)

OPAL, Va. — Truck driver Lucson Francois was forced to hit the brakes just five minutes from his home in Pennsylvania.

He'd reached the maximum number of hours in a day he's allowed to be on duty. Francois couldn't leave the truck unattended. So he parked and climbed into the sleeper berth in the back of the cab. Ten hours would have to pass before he could start driving again.

"You don't want even a one-minute violation," said Francois, a 39-year-old Haitian immigrant, recalling his dilemma during a break at a truck stop in this small crossroads town southwest of Washington.

The Transportation Department is moving to relax the federal regulations that required Francois to pull over, a long sought goal of the trucking industry and a move that would highlight its influence with the Trump administration. Interest groups that represent motor carriers and truck drivers have lobbied for revisions they say would make the rigid "hours of service" rules more flexible.

But highway safety advocates are warning the contemplated changes would dangerously weaken the regulations, resulting in truckers putting in even longer days at a time when they say driver fatigue is such a serious problem. They point to new government data that shows fatal crashes involving trucks weighing as much as 80,000 pounds have increased.

"I think flexibility is a code word for deregulation," said Cathy Chase, president of Advocates for Highway and Auto Safety, an alliance of insurance companies and consumer, public health and safety groups. She said the hours of service requirements, which permit truckers to drive up to 11 hours each day, are already "exceedingly liberal in our estimation."

There were 4,657 large trucks involved in fatal crashes in 2017, a 10% increase from the year before, according to a May report issued by the Federal Motor Carrier Safety Administration, an agency of the Transportation Department. Sixty of the truckers in these accidents were identified as "asleep or fatigued," although the National Transportation Safety Board has said this type of driver impairment is likely underreported on police crash forms.

The NTSB has declared fatigue a "pervasive problem" in all forms of transportation and added reducing fatigue-related accidents to its 2019-2020 "most wanted list" of safety improvements. A groundbreaking study by the Transportation Department more than a decade ago reported 13% of truck drivers involved in crashes that resulted in fatalities or injuries were fatigued at the time of the accidents.

The trucking industry has developed a strong relationship with President Donald Trump, who has made rolling back layers of regulatory oversight a top priority. At least a dozen transportation safety rules under development or already adopted were repealed, withdrawn, delayed or put on the back burner during Trump's first year in office.

"First of all, this administration is not as aggressive as the prior," said Bill Sullivan, the top lobbyist for the powerful American Trucking Associations, whose members include the nation's largest motor carriers and truck manufacturing companies. "Most importantly, the partnership with them has not been as suspicious of industry as in the past."

Trucking interests had pressed the administration and Congress for the rule changes and last year secured support from 30 senators, mostly Republicans. The lawmakers wrote in a May 2018 letter to Federal Motor Carrier Safety Administration chief Ray Martinez that the rules "do not provide the appropriate level of flexibility" and asked him to explore improvements.

Independent truckers in particular have chafed at what they see as a one-size-fits-all directive written by Washington bureaucrats who don't understand what they face on the highways.

"How can you judge me and what I do by sitting in a cubicle in an office?" said Terry Button, a burly hay farmer from upstate New York who owns his truck. Button estimates he's logged about 4 million miles since he started driving a truck in 1976. He said he's never caused an accident, although he's been hit twice by passenger vehicles.

The regulations have existed since the 1930s and are enforced by the Federal Motor Carrier Safety Administration. The proposed revisions are being reviewed by the White House's Office of Management and Budget and have not yet been released, according to a spokesman for the motor carrier safety office.

The regulations currently limit long-haul truckers to 11 hours of driving time within a 14-hour on-duty window. They must have had 10 consecutive hours off duty before the on-duty clock starts anew. And a driver who is going to be driving for more than eight hours must take a 30-minute break before hitting the eight-hour mark.

Breaking the rules can be costly. A trucker might be declared "out of service" for a day or longer for going beyond the time limits. Many are paid by the mile, so if they're not driving they're not making money. Francois, who was hauling 45,000 pounds of drinking water to a Walmart warehouse in Woodland, Pennsylvania, said he gets 50 cents a mile and earns, after taxes, around $900 a week.

Off-duty and on-duty time for most truckers is recorded automatically and precisely by electronic logging devices, or ELDs. Responding to a congressional directive, the Obama administration set in motion the mandated use of ELDs as of December 2017 — a regulatory requirement that Trump has not overturned.

Paper logs could be fudged pretty easily, but not the ELD, which is wired to the truck's engine and has a display screen visible to the driver. Chase's organization says an accurate accounting of a trucker's hours is one of the most effective ways to help prevent drowsy driving. But for many truckers, the logging devices have only highlighted the inflexibility and complexity of the regulations.

"If you run out of time in the middle of the George Washington Bridge, are you just going to pull over and park?" said Button, referring to the world's busiest span connecting New Jersey and New York.

The Owner-Operator Independent Drivers Association, which represents small business truckers like Button, said the schedule dictated by the rules is out of step with the daily realties confronting most of their members. Heavy traffic, foul weather and long waits for cargo to be loaded or unloaded keep them idle. All the while, the 14-hour clock keeps on ticking, pushing them to go faster to make up lost time.

Especially vexing is the mandatory break requirement, according to organization president, Todd Spencer. The pause forces drivers to pull over when they don't really need to rest, he said. And parking for a big rig is often hard to find and they may end up stopping in unsafe places, such as highway shoulders.

Spencer's organization, which says it has more than 160,000 members, has been pushing for the 30-minute break to be eliminated. In comments filed with the Transportation Department, the group recommended that truckers instead be allowed to effectively stop the 14-hour clock for up to three consecutive hours. During this off-duty period, drivers could rest or simply wait out heavy traffic.

But critics of the stop-the-clock idea said that would result in a 17-hour work window, heightening the risk of drowsy driving and accidents. There's no guarantee a trucker can or will sleep during that three-hour stop and a number of them would be driving at the end of a long period of being awake, according to the American Academy of Sleep Medicine, a professional society of doctors and scientists.

Harry Adler, executive director of the Truck Safety Coalition, criticized the Federal Motor Carrier Safety Administration for "appeasing industry." He said the agency has made the potential rule changes a higher priority than pushing forward with safety technologies such as software that electronically limits a truck's speed. Bipartisan legislation was introduced in the Senate last week that, if passed, would circumvent the Trump administration's indefinite delay of a proposed rule requiring new trucks to be outfitted with speed limiters.

"None of this should be up for consideration," he said. "There is no reason for any of this."

More than 26,000 glass cooktops have been recalled because they can turn themselves on

The glass cooktops were manufactured from December 2016 through July 2019 and sold at Lowe's, Home Depot, Best Buy and other stores from March 2017 through August 2019.

The Transportation Department is poised to relax the federal regulations that govern how many hours a day truckers can be behind the wheel. In…

Truck driver Terry Button drives his truck near Opal, Va., Thursday, June 13, 2019. The Transportation Department is poised to relax the federal regulations that govern how many hours a day truckers can be behind the wheel, a long sought goal of the trucking industry. (AP Photo/Tom Sampson)

Truck driver Terry Button looks over his trailer during at stop in Opal, Va., Thursday, June 13, 2019. The Transportation Department is poised to relax the federal regulations that govern how many hours a day truckers can be behind the wheel, a long sought goal of the trucking industry. (AP Photo/Tom Sampson)