Become a Member
Read Today's E-edition
Share This
Tunnel provides safe crossing under I-15 for bicyclists, pedestrians
0 comments
Share this 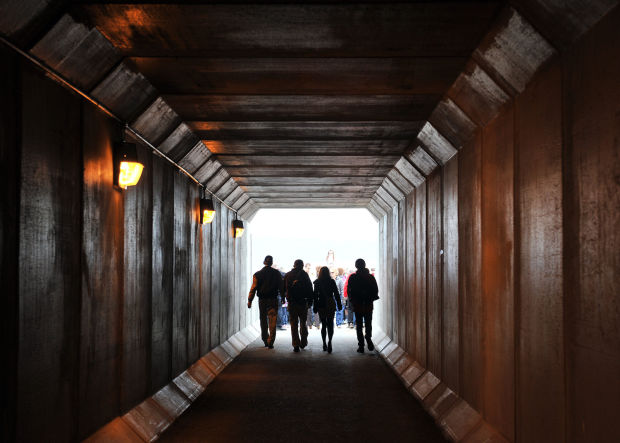 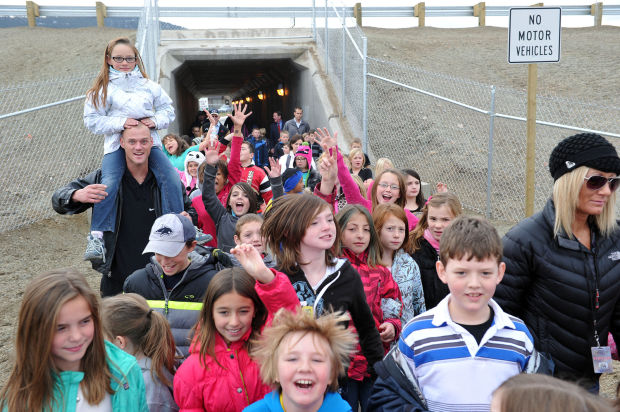 Eliza Wiley Independent Record - Local elementary school students gather on the east side of Interstate 15 after using the new tunnel at the end of Broadway to safely pass under the highway.

“Cut the rope! Cut the rope!” a crowd of fourth and fifth grade students chanted Thursday, goading Helena Mayor Jim Smith. He complied with a grin and cut the red ribbon, signifying the grand opening of the bike/pedestrian tunnel that links the East Helena trail to Broadway near the St. Peter’s Hospital. Around 100 students walked to the tunnel for the event with appearances from the mayor, county and city commissioners and federal and state transportation officials.

“This is a big event for Helena,” said Melinda Barnes, executive director of Bike Walk Montana. “It’s a really nice, safe way to get across the highway.”

City Commissioner Dick Thweatt said that in the past kids used a culvert in the area to cross the interstate. The tunnel was proposed in 2003 as part of the Capitol Interchange plan after the I-15 Corridor Environmental Impact Study was conducted.

“The interstate is a barrier in Helena and we wanted to permeate that barrier,” Thweatt said.

The lighted tunnel, which is 10 feet by 10 feet and spans 180 feet under Interstate 15, cost nearly $1 million of federal money. Construction of the tunnel began this year, and was completed Oct. 17 by Helena Sand and Gravel after less than two months of work.

“We’re excited about it,” said Rob Psurny, president of the Helena Bicycle Club and associate professor at Carroll College. It is a piece of the puzzle of bike and pedestrian infrastructure in Helena, he added. Psurny plans to use the tunnel weekly during fitness rides to Montana City with the club.

Chief of Police Troy McGee said the area of the tunnel will get extra patrol to discourage transient camps and other illegal activity in the tunnel for a short time, but patrol there will be similar to patrol near other tunnels in Helena.

Smith School students encourage Helena Mayor Jim Smith to cut the ribbon on the new tunnel that goes under I-15 at the end of Broadway.

Biden says there won't be a gov't shutdown Friday

Biden says there won't be a gov't shutdown Friday

Eliza Wiley Independent Record - Local elementary school students gather on the east side of Interstate 15 after using the new tunnel at the end of Broadway to safely pass under the highway.