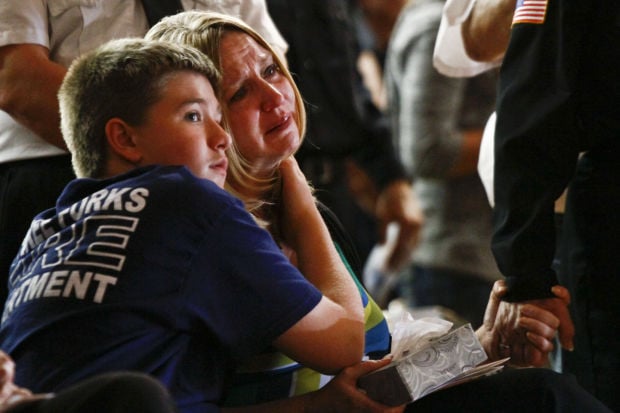 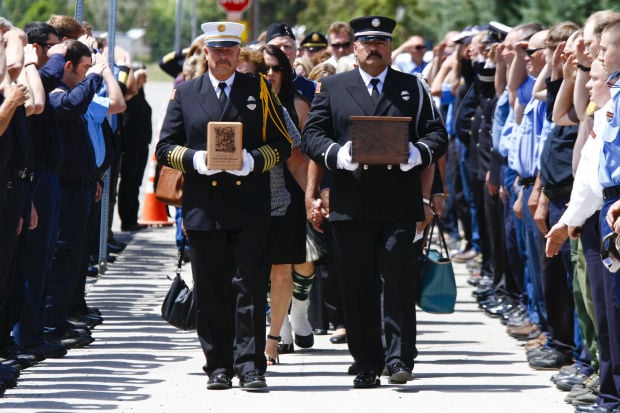 Shortly after 3 p.m. Wednesday, the gymnasium at Three Forks High School was silent.

The only sounds came from a bell tolling — five rings during each of three alarms — and the distant buzz of a lawnmower, the operator apparently oblivious to the weight of the moment inside.

The “Tolling of the Bell” is a pillar of a firefighter’s life. It signals the alarm when first responders are called to an incident and welcomes weary men and women back to the station when the call is complete.

Rummel and five others were killed in a fiery crash just after 9 p.m. June 19 on U.S. Highway 12 about 10 miles outside Helena.

Rummel was driving a Three Forks fire truck that was in Helena for water pump maintenance, which collided with a pickup truck containing Crystal Ross, Matt Boegli and their three young children, all of whom were also killed.

More than 100 fire trucks, ambulances, patrol cars and other emergency vehicles participated in a procession from the I-90 interchange to the high school. The vehicles hailed from communities all over western Montana, including, but not limited to, Missoula, Big Sky, Clinton, Gallatin County, Bozeman, Helena and Tri-Lakes.

Just before arriving outside the high school, the procession passed beneath a mammoth American flag hung between two ladder trucks belonging to the Eastgate Fire Department and the Bozeman Fire Department.

Those who spoke remembered Rummel for his sense of humor, his generosity and his total dedication to the art of fighting fires.

His sister, Beth Rummel-Flaming, was the first of Rummel’s family to address the audience.

“I don’t know what to say,” she said as tears rolled down her cheeks. “You don’t expect to get a phone call.”

The night before the service while sitting at his kitchen table, she decided to write a letter to Rummel telling him what he meant to her as her only brother.

“I was just waiting for him to put on that stupid Halloween mask he’s got in the closet and bang on the windows and scare the bejeezus out of me,” she said as she was writing, noting her brother loved to play pranks.

“You were truly one of the funniest men I have ever and will ever know,” Rummel-Flaming said.

“Look down upon us from this glorious place that you are in and take a look at all of these amazing people,” she said. “We are all here because you have touched our lives in one way or another.

“So many people were just instantly drawn to you,” she said. “I’m so proud to call you my big brother.”

She talked about Rummel’s decision to move to Montana from their hometown in Pennsylvania and how she and her family had a trip planned to visit him later in July.

She thanks everyone in Three Forks and in Montana for welcoming Rummel into the state that he fell in love with instantly.

“He was a blessing in our lives,” she said.

Fran Farr, Rummel’s boss at Farr Automotive and a longtime father figure to him, told the story of the hours leading up to the accident.

Farr owns a small plane and had agreed to fly Rummel to Helena so he could pick up the fire truck for the station. Little did he know it would be the last time he or any of their friends would see him alive.

“He was so excited about going to Helena and getting this fire truck,” Farr said.

During the flight, Farr decided to put on a sweatshirt and had Rummel take the wheel while he did so. Before Farr could get the sweatshirt over his head, Rummel jokingly jerked the plane upward because he wanted to get a better view of the valley below.

“We were just having a great time,” Farr said. “I’ve gone over this many times in the past few days, the flight, how much fun we had together.”

When they arrived at the Helena airport, Rummel exited the plane to go pick up the fire truck and drive it back to Three Forks.

“I will never forget this,” Farr said. “He says, ‘I’m gonna go have dinner with Brandi (his girlfriend) and Marshall (her son),’ and he shook my hand and said ‘I’ll see you in the morning.’

Farr said he was devastated when he got the news of the crash, but believes the nature of the accident is exactly how Rummel would have wanted to die: in a fire.

“I just think back on how happy he was when he got out of the plane,” Farr said. “The more fire, the more smoke, the more bangs, the more blowups, the happier the guy was.

“Everyone that knows Todd is a better person for knowing him,” he said.

Folded flags and fireman hats were presented to Rummel’s parents, his girlfriend Brandi Steward and her son Marshall Steward and the Three Forks Fire Department.

To close the ceremony, Chaplain Tim Dolan spoke a few short words about Rummel before the bell tolled.

“None of us will ever forget what happened last Thursday,” Dolan said.

“Fire has been his whole life,” he said. “The qualities of Todd the Fireman extended into a life of integrity.

“When we are confronted by tragedy and cannot understand … we have to hold onto the hope,” he said.

Every uniformed person in the gymnasium rose in one unit and, just before the ceremonial bell tolled for the last time, raised a salute to their fallen comrade.

“We will remember you,” Dolan said. “You will not be forgotten.”

Flowers can be sent to 13 E. Date St., Three Forks, and donations can be made to In Memory of Todd Rummel at the Manhattan Bank in Three Forks.

A private memorial service for Crystal Ross, Matt Boegli and their children will be held today at 3 p.m. at Twitchell Funeral Service in Helena and will be followed by a reception at the Helena Valley 4H Community Center at 2605 York Road.

Donations can be made to the benefit of the Ross and Boegli Family memorial fund at Valley Bank.

The funeral procession for a family of five killed in an automobile accident last week east of Helena travels down Rodney Street on Thursday.

Authorities to announce cause of June crash that killed six

The Montana Highway Patrol will host a press conference at 10 a.m. Tuesday to release the findings from an investigation into the cause of a J…

I cover crime and courts.