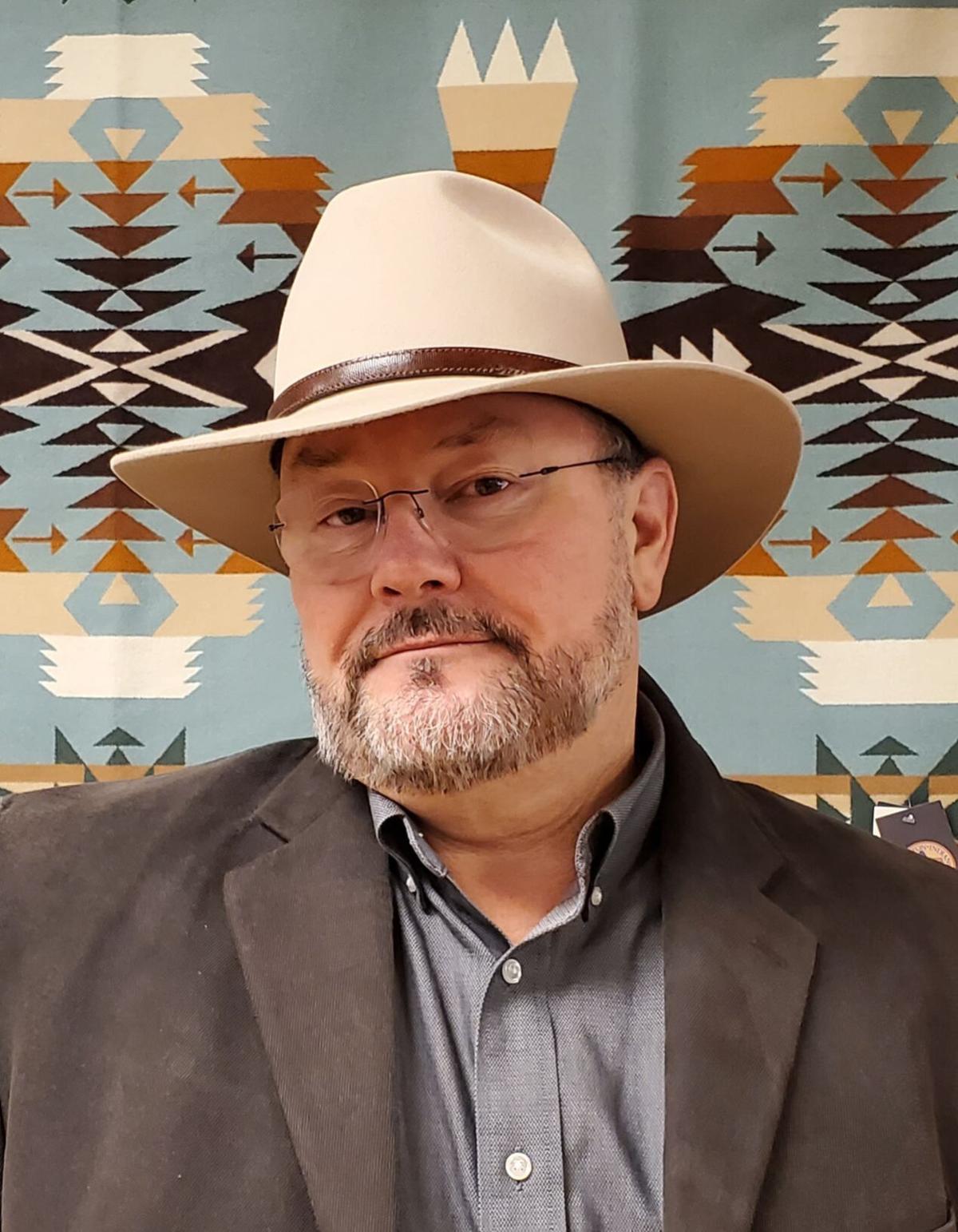 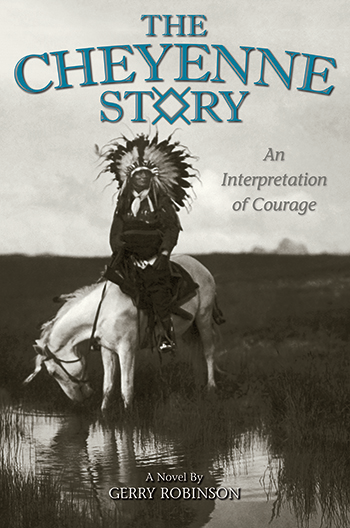 "The Cheyenne Story: an Interpretation of Courage" is a novel by Gerry Robinson. 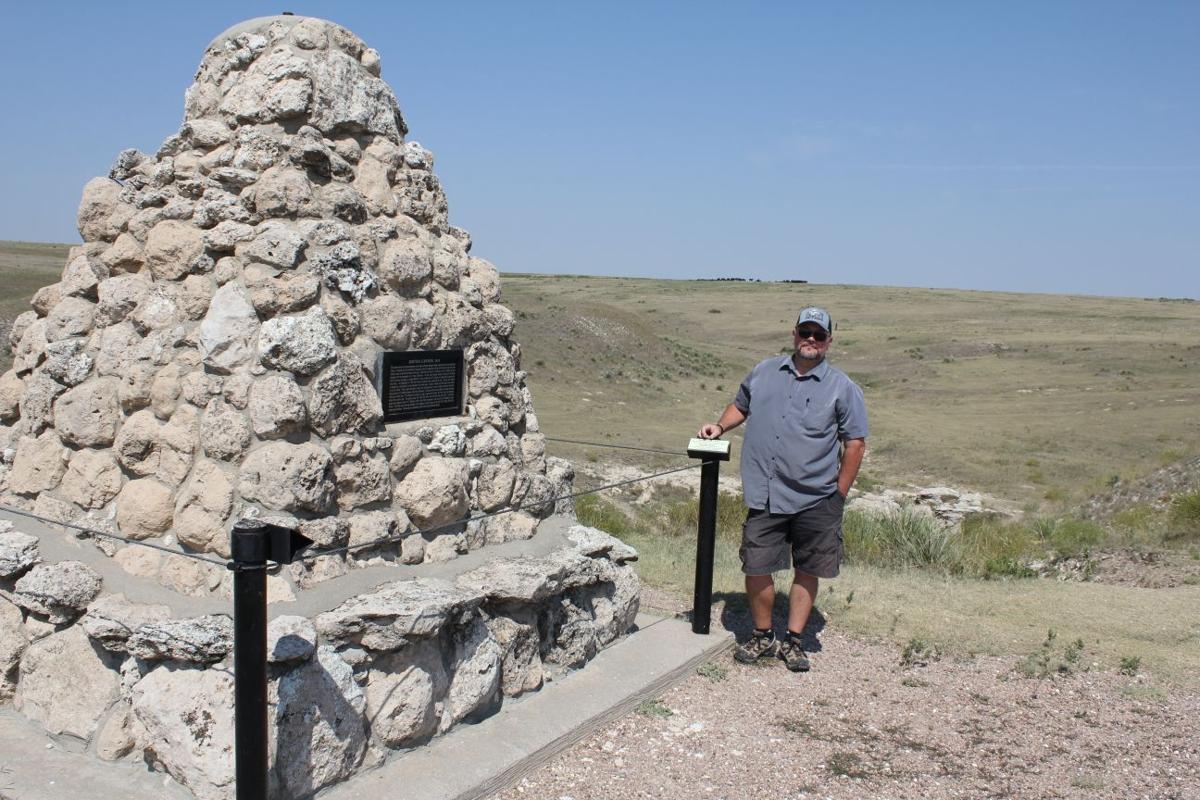 Robinson is pictured at a battlefield outside Scott City, Kansas researching for the next book in his Cheyenne trilogy.

As a child, Gerry Robinson visited a family graveyard with his father. It was there he first learned he had a famous relative connected to the Plains Indian Wars -- Bill Rowland, a scout and interpreter for the U.S. Army.

Robinson later learned he was also related to Cheyenne Sweet Medicine Chief Little Wolf, who was Rowland’s brother-in-law. Both became the main protagonists in his award-winning novel, “The Cheyenne Story: An Interpretation of Courage,” published by Sweetgrass Books, a division of Far Country Press.

Robinson, a Northern Cheyenne enrolled tribal member who now lives in Helena, grew up in Lame Deer on the Northern Cheyenne Reservation. There, he heard pieces of the story he wove into his book, which recently earned the National Cowboy Museum’s 2020 Western Heritage Award for Best Western Novel, and the Wyoming State Historical Society named it Book of the Year for fiction.

“I’d grown up hearing bits and pieces of the story from different relatives and friends,” said Robinson in a phone interview from Kansas, where he was researching information for part two of his Cheyenne trilogy.

“This story, like so many other Cheyenne stories, seems to all run together or different versions conflict with one another. It was very difficult to get the full story with any continuity to it at all.

”My great-great grandfather was an interpreter, William Rowland; he was woven through the whole Cheyenne story. Once I knew more about him, I got drawn deeper and deeper into the story.”

Robinson had written short stories and poetry before and was looking for a bigger, more meaningful project, “and this just rose up, really, from my heart.”

“This story had been told, but it had never been told by a member of the tribe.”

Rowland married into the Northern Cheyenne Tribe in 1850, lived with his family and the tribe, but also became the primary interpreter in their dealings with the U.S. Army.

When the book opens, it’s Nov. 25, 1876, exactly five months after Custer’s death at the Battle of the Little Bighorn.

Rowland had signed up for an assignment to pursue the Lakota, but suddenly General George Crook changed his mind and veered the column of more than a thousand troops straight toward the Cheyenne’s winter camp.

The fast-paced story shifts back and forth from Rowland and the army column to Little Wolf, who is urgently warning his people to move to safer ground. Unfortunately, the Cheyenne headman Kit Fox arrogantly shakes off Little Wolf’s warnings.

Robinson said one of his main motivations for writing this story comes from his own personal struggle with trying to understand tribal history.

“It’s hard to tie it together with continuity," he said. ”The further and further we get away from history, the less and less we are able to grasp it.”

His other motivation is trying to write an “emotionally accurate” account of these events. Rowland was brought to the front lines to parley with the Cheyenne to get them to surrender, but they resisted. He had just traveled up a ravine and seen bodies of young Cheyenne men he had watched growing up. He had lived with the Cheyenne for 26 years by this time, yet not one word appears in the histories that have been written describing what this must have felt like for him or for the Cheyenne.

“I try to tell the story as best I can from the Cheyenne perspective,” Robinson said. “For me, it’s been a journey of self-discovery.” The research and writing have taken him 16 years, so far.

Some of the Cheyenne story was written years ago in the book “Cheyenne Autumn” by Mari Sandoz, Robinson said, but he found it packed with way too much information.

“I’m unpacking it -- stretching it out in three volumes. It warrants that presentation.”

He tells the story using Cheyenne terms and dialogue, which can easily be understood by their context or by referring to the glossary at the end of the book. He also writes in the vernacular of U.S. soldiers and scouts.

This whole endeavor has been a learning process for Robinson. He writes in the preface that he’s the product of three generations of boarding schools, “where civility was beaten into us as the Indian was beaten out.”

His next two books will deal with the Cheyenne being forced to relocate to Oklahoma and then later returning to their home in Montana.

“This is the fourth time I’ve been up and down this trail,” said Robinson. “I keep finding interesting aspects of the story” and, of course, some conflicting information.

“There’s no official name of the trail. It’s just been called the Cheyenne Exodus.

"I call it The Journey Home or the Long Walk Home from El Reno, Oklahoma, to Montana."

Next year, Robinson is planning an educational trip along the trail with students from Chief Dull Knife College, tribal elders and college president Richard Littlebear to explore traditional Cheyenne values.

“The Cheyenne are hungry for their history,” he said. The book is part of a larger movement by the Northern Cheyenne people and by indigenous people in general to reclaim their culture and history.

“This first book is the story of how the Northern Cheyenne were taken from their homeland and forced to live in Indian Territory. But that’s just setting the stage for the amazing story of how they returned.

“This is a story of a great victory. This is the only story of Native American people getting back their land…. It’s a story of how we human beings have a will to live and the resilience in all of us if we care about something deeply enough to protect it. These people had a love of this land...that they would give their very lives for it. And they did.”

The book is $19.95 and available in bookstores and online.

Visit http://www.montanabookfestival.com/ to listen to Robinson’s Montana Book Festival presentation this week, and also check out his interview with Yellowstone Public Radio at https://www.ypradio.org/show/resounds-arts-and-culture-on-the-high-plains/2020-08-24/resounds-gerry-robinson.

A Helena man was arrested in connection with a robbery at a local bank Friday afternoon.

People should pause before putting that snow shovel away just yet, as Mother Nature is expected to bring a flurry or two to Montana on Sunday …

St. Peter’s Health has asked a judge to stay a lawsuit filed by a former oncologist against the health system, saying he has not exhausted adm…

A nonprofit conservative group that says it is dedicated to organizing students to promote freedom, free markets and limited government is hav…

Landers, 69, was part of an extremist group that kept the FBI at bay during an 81-day standoff from March 25 to June 14, 1996 at “Justus Township,” their remote lair near Jordan in Garfield County.

After being canceled last year for the first time since World War II, Helena Public Schools' Vigilante Day Parade will return next month with …

"The Cheyenne Story: an Interpretation of Courage" is a novel by Gerry Robinson.

Robinson is pictured at a battlefield outside Scott City, Kansas researching for the next book in his Cheyenne trilogy.