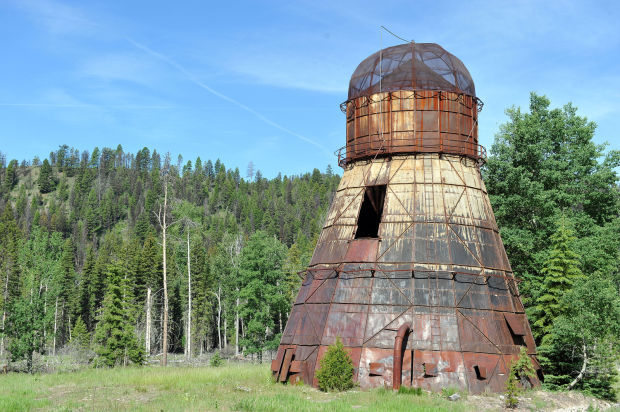 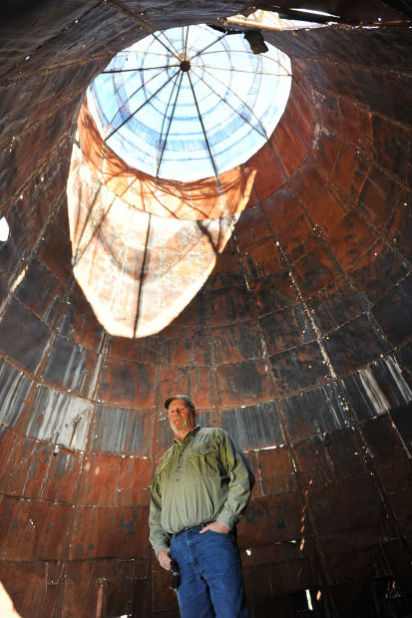 Eliza Wiley Independent Record - Rick Dunkerley stands inside a 90-foot-tall, 45-foot-wide teepee burner that will be the centerpiece of a new environmental sculpture park in Lincoln.

There are 10 tons of iron and a significant amount of irony in Rick Dunkerley’s plans for the old teepee burner that stands abandoned at the Delaney Lumber Mill in Lincoln.

The mill closed some 40 years ago and the only reminder of its existence is the teepee burner — 90 feet tall and 45 feet in diameter. The burner, framed with angle iron and skinned with sheet metal, weighs 20,000 pounds

Teepee burners were used to burn the wood scrap from lumber mills. They were eventually deemed to be too dirty, generating too much air pollution, and were no longer used after the late 1960s.

Many logging operations simply bulldozed their teepee burners and buried them. The Delaney burner, however, still stands solid.

The irony is how Dunkerley plans to repurpose the burner, an environmental problem, to be a centerpiece of an environmental sculpture park that will open this year in Lincoln. The plan is to disassemble and move the piece of industrial history.

The project, Blackfoot Pathways: Sculpture in the Wild, will begin in September with an international sculpture symposium. The artists are coming from Ireland, Finland, Denmark and one from New York City. The artists will create the founding sculptures at the symposium, Sept. 15 through Oct. 3.

The goal of the founding sculptors is to “celebrate the rich environmental, industrial and cultural heritage of the Blackfoot Valley.”

“That’s the whole premise of the park,” Dunkerley said. “These artists are coming in and responding to this new — to them — environment. They’re not here to criticize the past. They’re here to honor the past and look to the future.”

Dunkerley’s experience working as a logger has made him especially sensitive to the concerns of his neighbors in Lincoln.

Given that history, Dunkerley said many people, himself included, are likely to underestimate the townspeople.

One of Dunkerley’s concerns was how the residents would react to an “environmental art” project. Anything to do with “environmental” can have a “negative connotation in Lincoln, Montana,” Dunkerley said, slowly, carefully, apparently weighing his words.

But when Dunkerley gathered a group of residents to present the idea the response was “overwhelmingly positive,” he said.

One of the folks who attended the public meeting Dunkerley organized was a lifelong logger. “I thought if anyone is going to be offended by ‘environmental art’ it will be him,” Dunkerley said. “But, not at all. He’s 100 percent behind it.”

“But I think anyone who realistically looks at the way our world is now, the way our country is, will realize that the type of logging that was going on and the number of jobs it was supporting, that’s never coming back.”

The idea for the sculpture park was seeded in Dunkerley from a friendship he formed with an Irish sculptor while teaching at the Pratt Fine Arts Center in Seattle.

Kevin O’Dwyer, a sculptor from Ireland, was a resident artist at the time and attended Dunkerley’s workshop on forging Damascus steel.

O’Dwyer had founded and developed a sculpture park in Ireland in 2002 — Sculpture in the Parklands.

O’Dwyer is now the Lincoln project’s artistic director and curator.

When Dunkerley moved to Montana in 1985 he worked first in Ennis as a logger. He moved to Lincoln in 1990 and by the mid ’90s logging had taken its toll on his shoulders and he was forced to quit working in the woods.

In the years since he has developed his skill as a knife maker and engraver/silversmith.

Dunkerley sees Blackfoot Pathways: Sculpture in the Wild as an economic and educational boon for Lincoln that will not harm the valley’s character.

“It won’t change the valley much. The people who come here to see the park aren’t moving to Lincoln. A lot of people who live in Lincoln don’t want it to change, so it’s almost ideal in that way.”

“It will be interesting to see how people who have never lived here come in and interpret the landscape we live in every day,” Dunkerley said. “You really take a lot for granted when you see it every day.”

But foremost in Dunkerley’s thoughts and desires for the sculpture park is his relationship with his community of Lincoln.

Dunkerley’s roots were shallow until he reached Lincoln. He grew up in western Pennsylvania. He lived in 11 different places by the time he graduated from high school. From there he went into the Air Force and was stationed in Texas for four years.

“A couple of years ago it hit home,” he said. “I’ve lived in Lincoln longer than anywhere ever. This is where I’m going to stay; it’s home.”

His effort to bring the sculpture park to Lincoln is a matter of celebrating the community.

“To me it comes back to pride in this community,” he said. “Pride in our past and pride in where we’re moving to.”

Eliza Wiley Independent Record - Rick Dunkerley stands inside a 90-foot-tall, 45-foot-wide teepee burner that will be the centerpiece of a new environmental sculpture park in Lincoln.