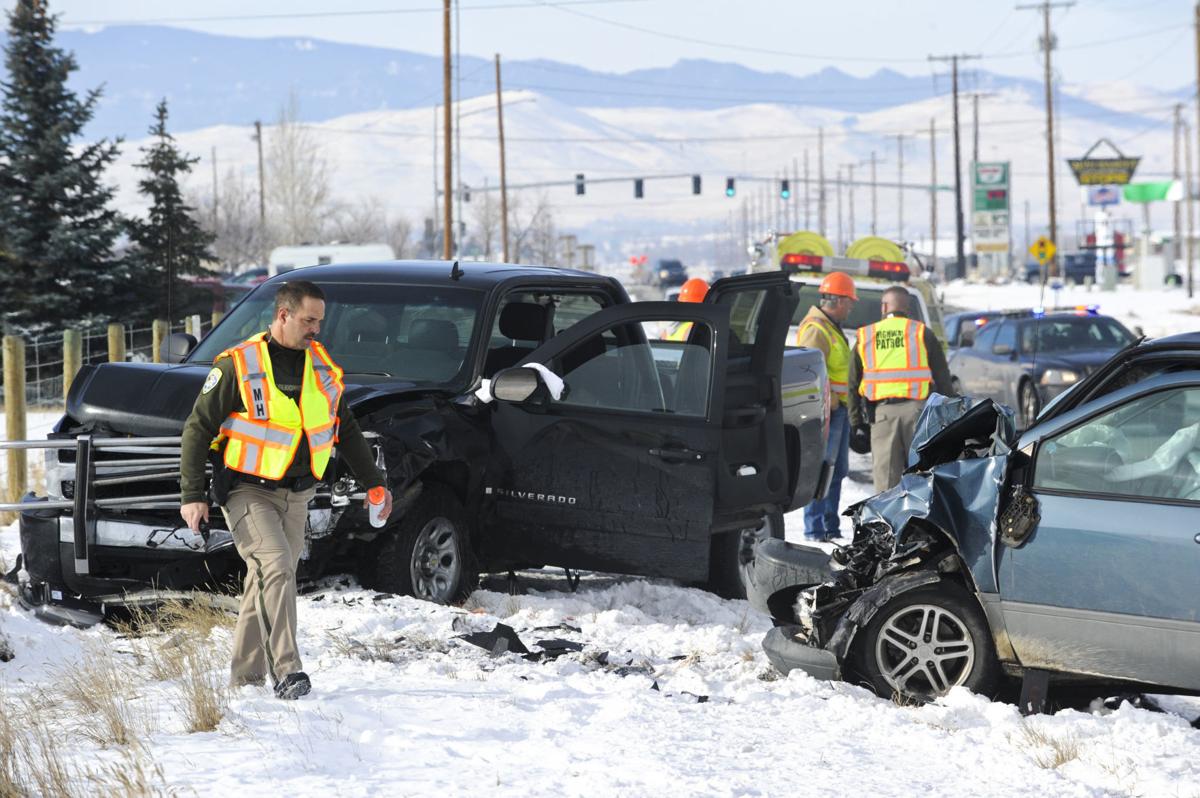 Montana Highway Patrol Trooper Dave Gleich surveys the scene of a two-vehicle accident on Canyon Ferry Road just east of the Wylie Drive intersection in Dec. 2014 that resulted in one fatality. 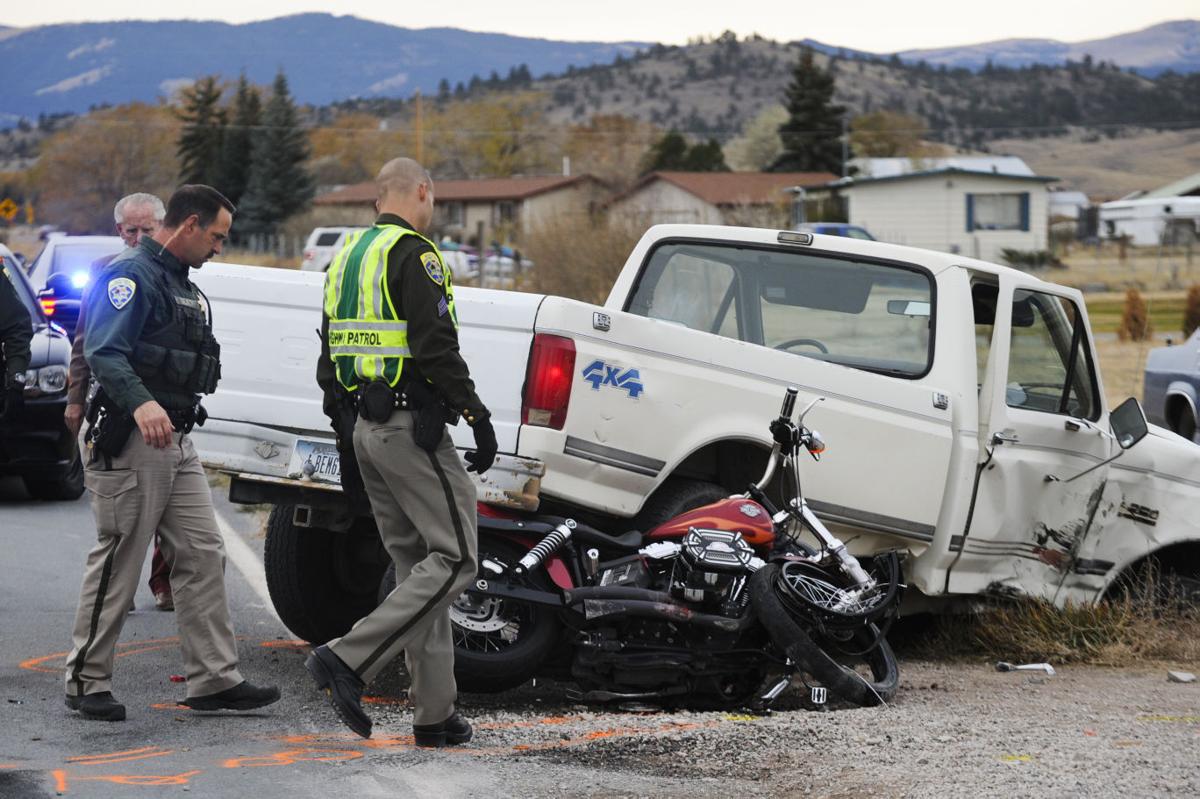 Montana Highway Patrol troopers investigate the scene of a fatal crash that left two dead on Lincoln Road in Nov. 2015 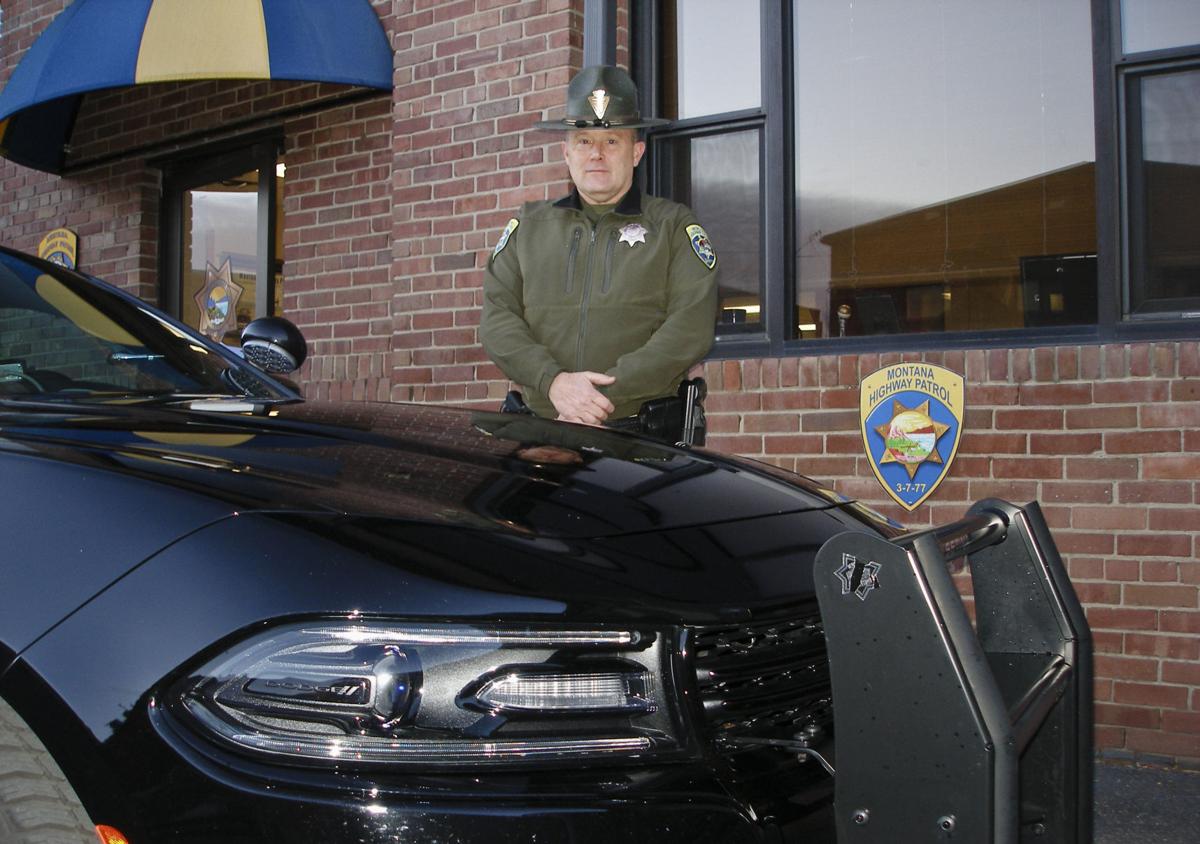 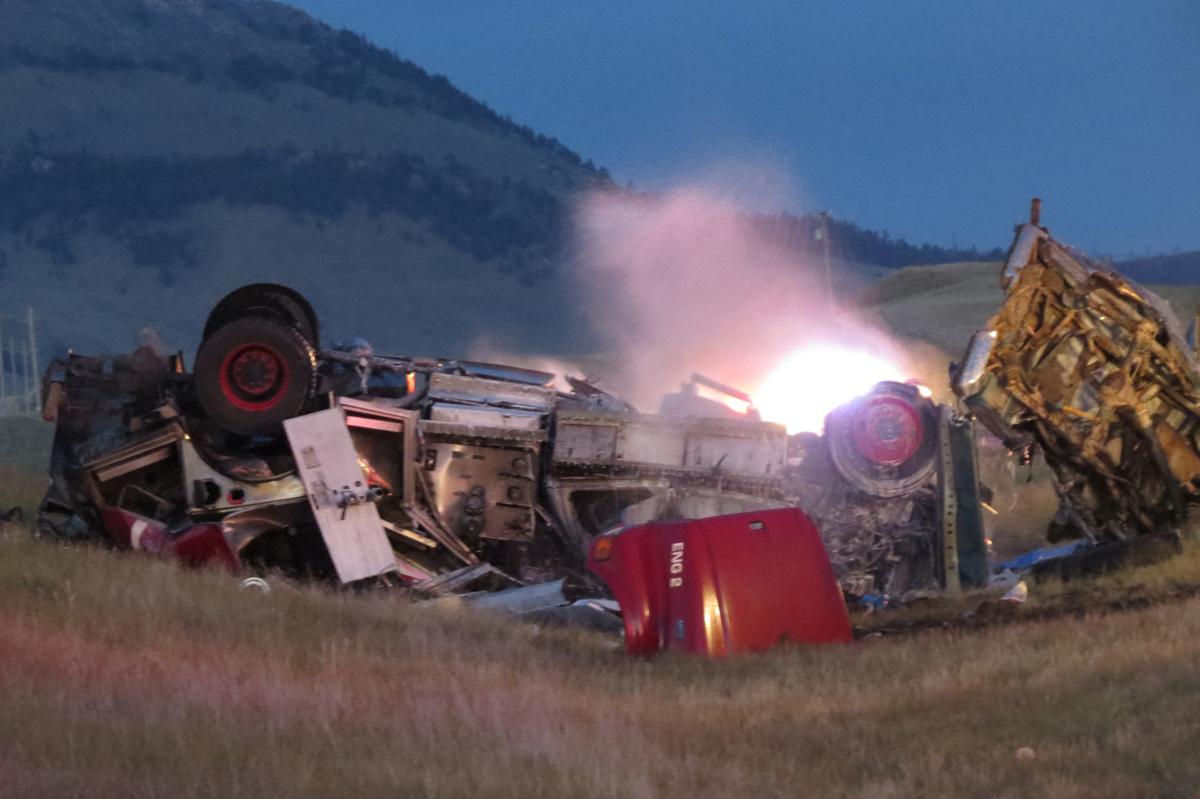 The wreckage from a two-vehicle fatal crash involving a fire truck and a pickup truck east of Helena in June 2014. The crash took the lives of six people, including three children. 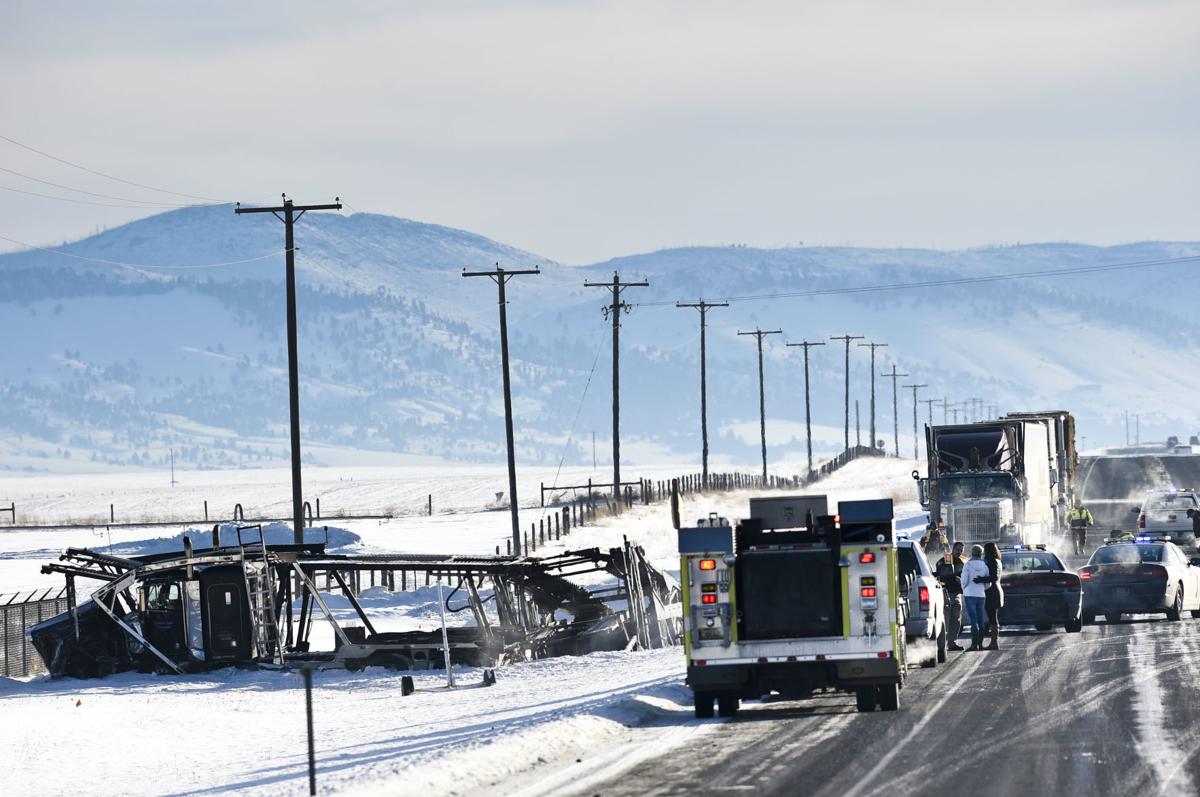 The scene of a fatal crash at the intersection of U.S. Highway 12 E and Triple Seven Drive in Jan. 2017. 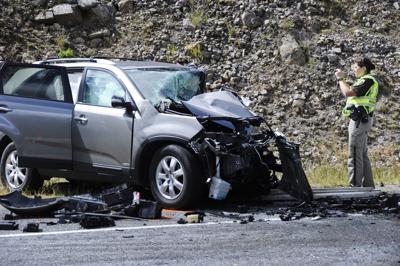 This is the third story in a three-part series about fatal crashes and how they affect communities in Lewis and Clark, Jefferson and Broadwater counties.

“Does it make you nervous?”

Captain Chad Dever, district commander of Montana Highway Patrol’s District 2, sat steeping in reflection. His uncle, his inspiration for joining law enforcement, died from a heart attack at age 62 – right in line with statistics that place first responders at risk of early death.

"There's a lot of stress involved in our jobs, and as a result, we die young," Dever said. "Our statistics on heart attacks and dying young are startling."

These statistics are backed by an industry norm of health problems, both mental and physical, caused by stresses associated with the job.

Montana’s first responders are no different. Law enforcement, EMS workers, and fire departments are tasked with, among other things, responding to fatal wrecks, which numbered 63 in Lewis and Clark, Jefferson and Broadwater counties from 2013-2017.

Each fatal wreck, more than just a number on a spreadsheet, is surrounded by rings of trauma – starting with first responders and spanning outward to their families and communities.

After particularly bad calls that are likely to affect more than just troopers, the MHP will call for a critical incident debriefing session to work through what happened on the scene. These involve 9-1-1 operators, law enforcement, EMS workers, fire departments, wrecker operators, coroners and anyone else who responded to the scene.

The peer support program, in contrast, is a way to connect with officers one-on-one, rather than in a large group setting. The goal is to get troopers talking in order to mitigate lasting stress caused by traumatic incidents like fatal crashes.

Dever is trained in peer support, which is growing in popularity and importance throughout the Montana Highway Patrol.

“Ultimately we want them to have a long, healthy career, and a long, healthy retirement,” Dever said. “That’s the bottom line. To fill in another layer after debriefing teams, we started the peer support program, where it’s basically troops looking after fellow troops – their peers.”

The trooper-to-trooper program is a way for them to look after their own with what Dever referred to as “talk therapy.” It’s not a counseling session, and the troopers aren’t trained psychologists. It’s simply a way for members of the Montana Highway Patrol to talk about what they’re going through.

Talking through trauma and on-the-job stress is a way to keep emotions from bottling up and creating lasting effects, like what Dever experienced with his uncle. One of the problems with talk therapy, though, is just that – talking. While Dever says he wears his heart on his sleeve, he acknowledged that others may not be as comfortable opening up.

According to both Dever and Carol Staben Burroughs, a licensed clinical professional counselor who trains MHP officials for critical incident debriefings, the nature of the work can make it hard for first responders to want to talk about their emotions. Whether it's the result of personal traits or the demands of the industry, talking about feelings hasn’t traditionally been encouraged.

“The struggle is trying to get troops to know that it’s OK if they need to talk some things out. That is our challenge,” Dever said. “We come from a profession where we don't typically talk about our feelings. We just don't. Look at what we do. We put a gun belt on every day. We have to be strong. We have to get through a lot of difficult things that a lot of people don’t have to face.”

Staben Burroughs agreed, adding that although that has been the norm, it’s starting to change.

“In the past, there was a real serious ‘pull your boots up’ mentality among leadership,” Staben Burroughs said. “We have generations of law enforcement, fire and EMS people who just learned unspokenly not to talk about this stuff. Suck it up or don’t do the job. That’s changing for the last generation.”

Trauma and stress are uniquely tailored to each individual and their experiences, according to Staben Burroughs. The sights, smells, sounds, feelings or people involved in any given call are what shape the days and weeks that follow, and the point of both critical incident debriefings and peer support is to limit the damage they can do in the long run. Even if it’s hard.

“They’ll know. They know exactly what the worst part was for them,” Staben Burroughs said. “That’s the thing that they can’t get out of their head. It’s affecting them. It’s sticking with them.”

What initially sticks with the first responders are generally the things that never leave them. For trooper Mike Zufelt, who responded to the 2014 fatal wreck involving a fire truck and a pickup truck east of Helena, the sights and smells haven’t gone away. The crash took the lives of six people, including three children.

“It was terrible,” Zufelt said. “We kind of have to prepare ourselves for those types of situations, and we do have a fair amount of training that’s involved in that, but you know, when there’s little kids involved, that’s the hardest thing.”

The wreck, according to Zufelt, resulted in a fire, the smell of which still lingers in his memory, and comes back with the lighting of a campfire.

“I cope with it very well, but it’s the smell that will bring it back to me,” Zufelt said. “When I do smell that smell, it kind of flashes back. I’ve learned to realize that my campfire is not that fatal crash.”

While Zufelt didn’t attend the critical incident debriefing that happened after the wreck in 2014, he acknowledged the importance of talking to someone. For him, it’s his wife, who is a mental health nurse practitioner and his “greatest support system.” Together, they work through the things that bother him.

He also acknowledged that it’s been easier to get younger first responders on board with talking through trauma than it has been for older folks, who he said sometimes resist the idea, perhaps based on a gap in generational values.

“All first responders can benefit from them, as long as they just go,” Zufelt said. “That’s probably the hardest thing – with our personalities, we’re kind of expected to be these tough, outer-shell people, and (we need) to get it through their heads that you need to debrief that, whether it’s there or somewhere else. It’s good to talk to your partners and other first responders.”

On the proactive edge of the mental health movement, according to Staben Burroughs, is the Montana Highway Patrol. She said the leadership within the agency has been on top of recognizing the effects that stress – fatal crashes included – can have, and takes active steps to get officers the help they need.

Sgt. Jay Nelson is working to be on the front end of that.

“In my 20-year career there’s been a fairly good increase (in peer support/debriefings) because although we’re tough and taking on the world, we’ve understood that we’re not invincible,” Nelson said. “When I first started, that was sort of shunned from the top down. Now, it’s embraced from the top down. You can still be rough and tough and able to take on the world, but it’s accepted to be able to say, ‘I need some help.’”

Having worked on the same fire truck crash as Zufelt four years ago, Nelson knows all too well the images, sights and sounds that don’t go away. According to Nelson, asking for help in their line of work can be perceived as a sign of weakness, although that is changing. His goal is to open up avenues for communication to help ease trauma as it comes.

Peer support has been a way to do just that. Of the roughly 242 troopers in the Montana Highway Patrol, 30 are trained in peer support. According to Dever, there could still be more.

“It’s a great start, but we’re working on developing this because it’s newer,” Dever said. “We’ve got to keep it perpetuating. We’re working on building teams in every district and gaining more education and experience to get better at helping our fellow troops.”

While failing to wear a seat belt may not cause a car crash, it is often the reason wrecks become fatal.

Deadly Roadways: A look at fatal crashes and how they affect the Helena area

Many fatal crashes around Helena in 5 years may have been avoidable, data show

If you have a problem with stress related to the job, you should find another job...