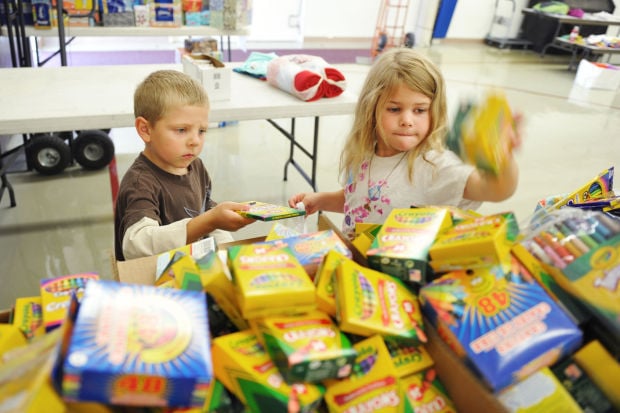 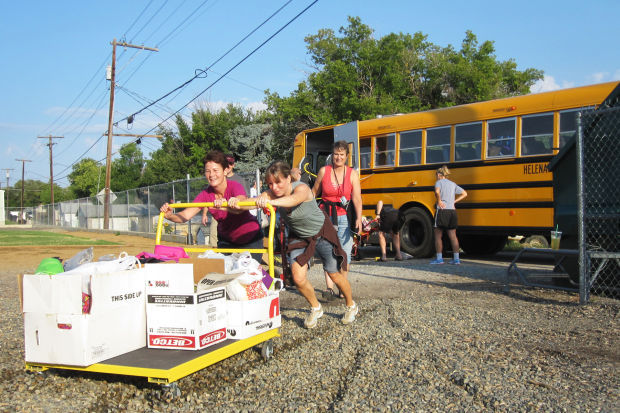 Kari Wald, left, and Toni Haden push a cart loaded with school supplies for students on Saturday as they help to unload a bus that’s been filled through donations.

Stuff the Bus is a project of the Helena based Angel Fund that helps to provide assistance to students and families. 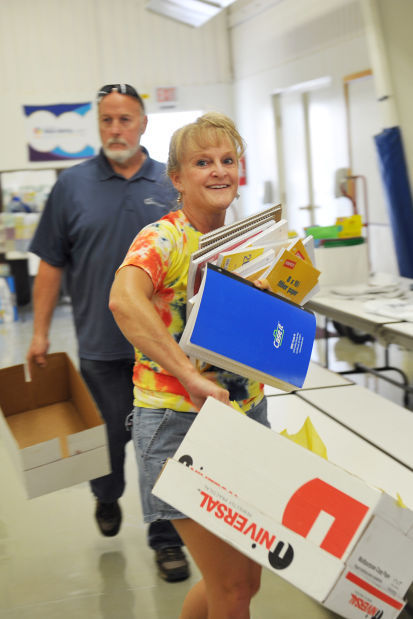 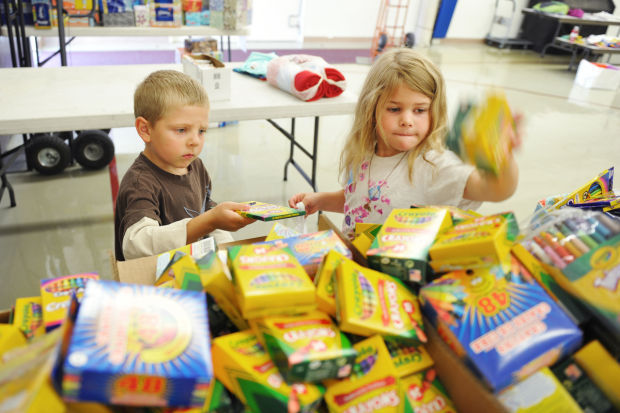 Volunteers arrived early on Saturday to empty a school bus filled with a community’s concern for its children.

It may have been a record volume.

Unloading the bus at Bryant Elementary School offered more room in its gymnasium for sorting the donations, but the larger space left participants uncertain if community generosity this year reached a new high. The volume, nonetheless, was impressive.

“Wow, I have a feeling this is way more than last year,” said Jannice Odermann, who is with the East Helena School District, as she returned to the bus for another load to carry inside the gym.

Sandy Hunt and Brenda White were constantly on the move, as it was their job to ferry the school supplies to the doors of the bus where volunteers waited. None had to wait long.

Some of the women who volunteered for the morning’s work labored as a team to push a cart loaded with bags and boxes through soft gravel to ferry these back-to-school essentials to the school’s door.

Tables set up in the gym were soon overflowing with everything from lunch boxes and backpacks to notebooks, pens and pencils. Reams of paper were divided into college-ruled for older students and wide-ruled for younger hands. Bottles of white glue with orange caps stood in neat rows, much like the students will appear at their desks in classrooms once school begins.

The Angel Fund is a tax-exempt organization that helps area schools by providing classroom supplies, clothing, shoes and other items low-income families may require, according to its website.

Schools from Boulder to Wolf Creek and Townsend to Canyon Creek are all recipients of these donations. Collections began June 10.

Distribution of these school supplies is to begin this afternoon, said Jim McGrane, a school counselor at Helena Middle School who is one of the project’s organizers.

He suggested parents call their children’s school to see how the distribution is being handled.

There’s no formula on how the supplies are divided among the schools, he said. What students will need help decides what goes where.

“I know I will use a bunch more spiral notebooks than an elementary school,” he said, adding “You utilize one of those skills you learned in kindergarten: you share.”

This is the seventh year for the Stuff the Bus, he said.

He paused in his work to help haul the school supplies into the gymnasium and watched as the pile of bags and boxes increased on the floor as volunteers continued to unload the bus.

“It’s one of those fast and furious events,” he said.

Providing students with the things they will need gives the children a sense of belonging, McGrane said.

There’s a need to help students have the necessary school supplies when they start classes, McGrane said.

“It’s a great program,” he continued. “I’m sorry it didn’t come about years ago.”

“This is one event that helps students in the entire community,” said Mary Anderson, another of the Stuff the Bus organizers. “This is a real Helena community effort.”

She figures that between 1,200 and 1,300 students will benefit as a result of the donations that filled the bus.

Anderson said screening families isn’t as much of a priority with Stuff the Bus, unlike some other Angel Fund projects that look to assist students whose family incomes are low enough to qualify the children for free or reduced-price school lunches.

“The idea is every student can start school with all of the necessary supplies so they can be successful,” she explained.

Nick Radley, the Bryant Elementary School principal, was among the volunteers and said having all of these supplies for students would mean one less thing for school staffs to worry about when classes begin.

“The start of school is an exciting time. Stuff the Bus gives everyone a chance to be part of it,” Radley added.

Kari Wald, left, and Toni Haden push a cart loaded with school supplies for students on Saturday as they help to unload a bus that’s been filled through donations.

Stuff the Bus is a project of the Helena based Angel Fund that helps to provide assistance to students and families.