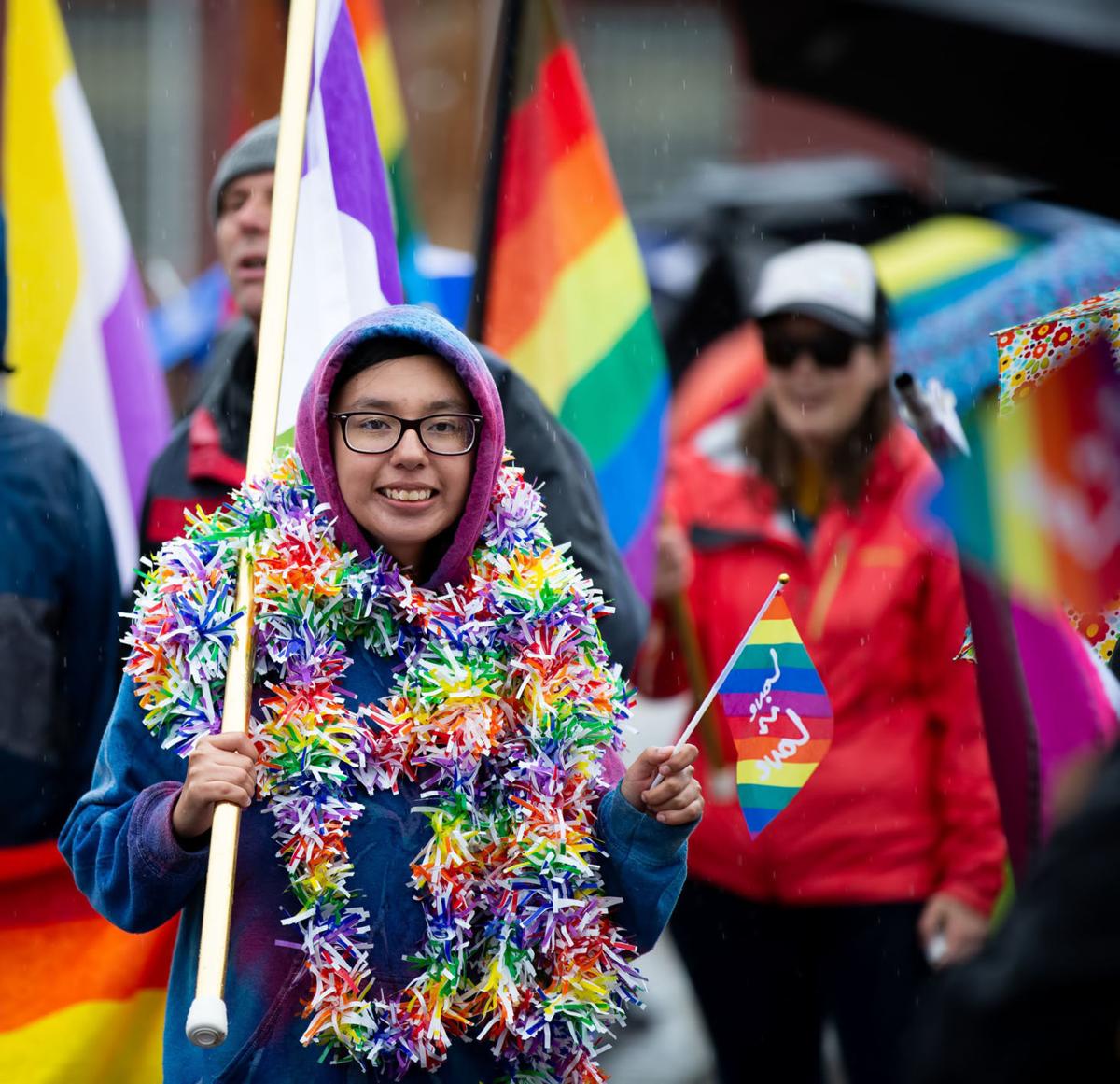 Many of the Big Sky Pride marchers carried rainbow flags or wore rainbow clothing as a symbol of their cause. 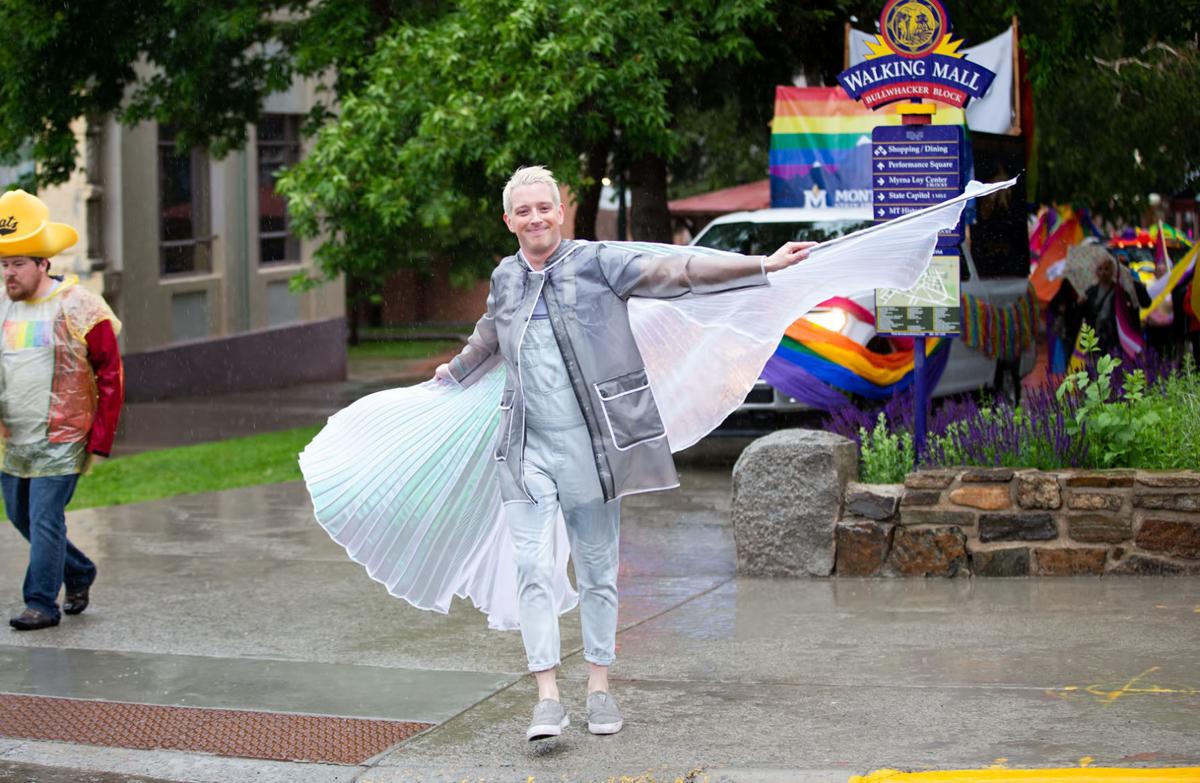 Not everybody embraced the rainbow theme at Saturday's Big Sky Pride Parade. 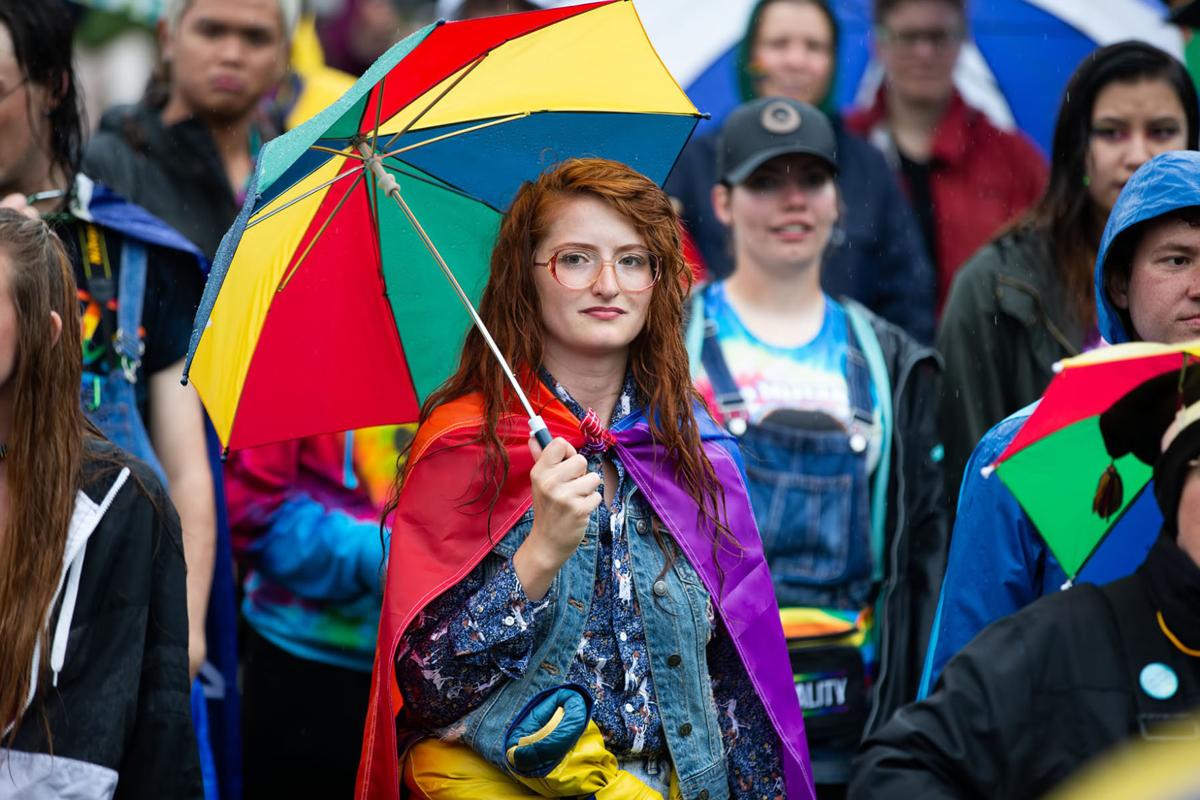 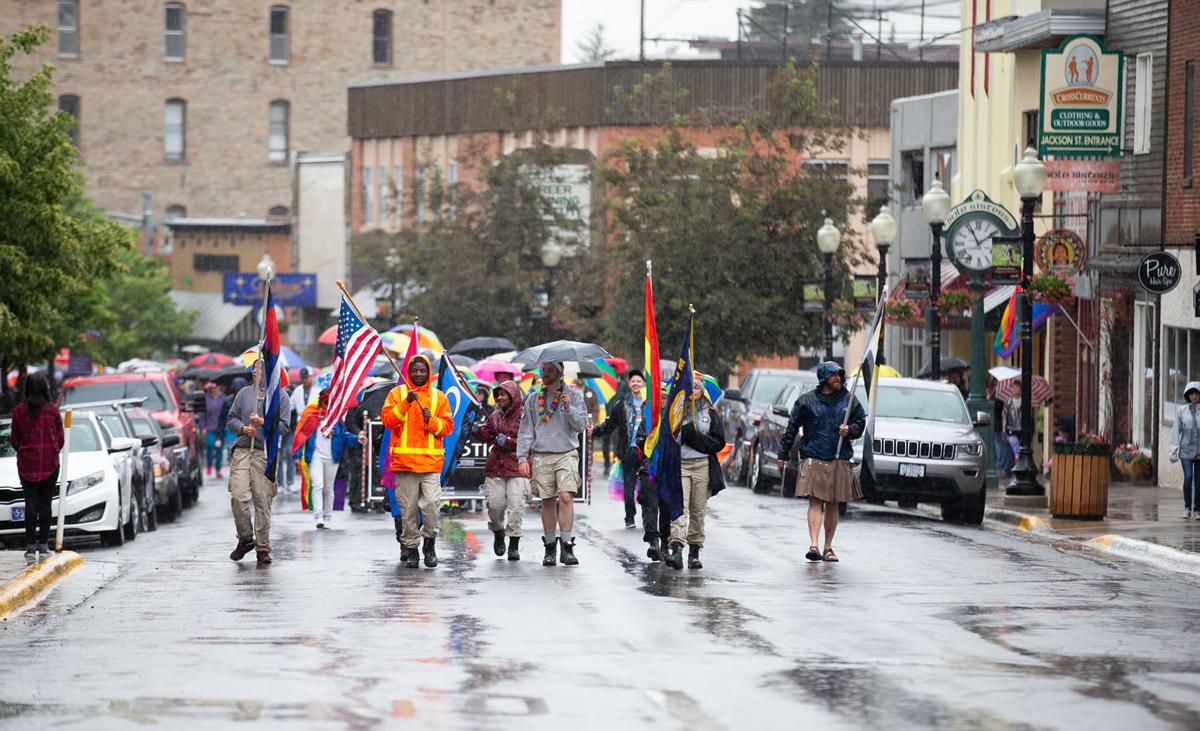 Marchers carry on the tradition of the first Big Sky Pride event held in Helena in 1993.

“We may not be seeing rainbows in the sky but we’ve been seeing rainbows all across the city today,” Gov. Steve Bullock told the 25th annual Big Sky Pride rally on a wet and cold Saturday.

Big Sky Pride first met in Helena in 1993 to advocate for both legal equality and public support of the LGBTQ community. On Saturday, the annual parade and rally made a return to Helena with hundreds marching down Last Chance Gulch drumming and chanting to spectators huddled out of the rain in doorways and beneath awnings.

Big Sky Pride first met in Helena in 1993 to advocate for both legal equality and public support of the LGBTQ community. On Saturday the parad…

“Chicks with Sticks” drummed on buckets as chants such as “Hey hey, ho ho, bigotry has got to go” echoed down the narrow gulch. Many of the marchers carried rainbow flags or wore rainbow clothing as a symbol of their cause. Others held banners for organizations such as the Montana Human Rights Network and the ACLU as well as in opposition to I-183, a citizen initiative that would require a person to use restrooms or locker rooms in accordance with the gender on his or her birth certificate.

“It’s Pride, you don’t miss out on Pride in Montana,” said Keva Alvarado, who traveled from Billings to march in the parade. “It’s just knowing that you’re somewhere surrounded by people that unconditionally support you.”

The parade finished at Anchor Park where a sizeable crowd gathered for the rally.

First to speak was state Senate candidate Rep. Bryce Bennett, D-Missoula, who said their message is needed “now more than ever.”

“We’ve gone from an era where the president helped us advance towards marriage equality and equal rights to one where we have to push back for our basic rights,” he said, adding that he is excited to see resilience in the LGBTQ community.

Rep. Kim Abbott, D-Helena, found commonality in the treatment of the LGBTQ community with other marginalized people -- lodging criticism at the Trump administration for its immigration policy of separating families who enter the country illegally.

Democratic PSC candidate Andy Shirtliff echoed Abbott in condemning the policy as a “fight for the soul of our country.”

Democratic Sen. Jon Tester did not attend Saturday's event, but a statement was read on his behalf that said in part, "No matter who you love, who makes you happy or who you chose to be with in life, you deserve safety, you deserve respect, you deserve opportunity and you deserve equality."

Shawn Reagor spoke for the transgender community, saying in part, “We believe the best way to change someone’s mind is to show them our hearts.”

Not all who attended Saturday’s parade and rally were there in support. As speakers took to the stage, a chant began from the back of the crowd, with several supporters attempting to drown out a man holding up a Bible and condemning homosexuality on religious grounds.

The man was among several protesters who had traveled from the Fellowship Baptist Church in Sidney. Pastor Jordan Hall said their message was to both condemn homosexuality and to encourage repentance.

Sen. Diane Sands, D-Missoula, described a different scene at the first Big Sky Pride. Sands and others were working to repeal laws that criminalized so-called “deviant sex,” but during the event they experienced hostility including having eggs thrown at them.

Former Helena Mayor Colleen McCarthy also recalled troubling experiences at the event 25 years ago. As a city councilwoman at the time, she was warned beforehand by several constituents who told her, “You will regret this decision and you will never be elected to another position in this city or county.”

“I told them my decision to participate had nothing to do with being elected, it had to do with the message of inclusion and acceptance,” she said.

That first parade ended at the Capitol, and when McCarthy went up the steps to speak, she says two men angrily rushed at her only to be stopped by police.

Democratic U.S. House nominee Kathleen Williams said the message behind Big Sky Pride resonated with her, including supporting the passage of a nondiscrimination ordinance in Bozeman.

“People speaking out against intolerance and injustice helped make this state the first place that ever felt like home,” she said.

“The celebration of Pride is a reminder of people from all backgrounds and all creeds that love is the most powerful weapon that we possess when facing people that marginalize and suppress the very ideals America was founded on,” he said. “We all deserve respect and decency.”

Bullock was the final speaker and agreed that progress had been made but cautioned against complacency.

Agents with Immigration Customs Enforcement have arrested at least 16 people in western and central Montana in the last month and charged nine, primarily from Mexico, with crimes related to being in the country illegally.

Jacob Hartford-Corpron of Boulder has wanted to be a law enforcement officer for as long as he can remember. On Friday, the Helena Police Depa…

'Two Yellow Lines': Movie being filmed in Helena and Missoula is based on Mann Gulch fire

The activity at the Conoco gas station in Montana City caused more than one double take Thursday.

GREAT FALLS — The first grizzly bear in recent memory has been spotted at a Montana wildlife refuge.

Ever wonder why Interstate 90 takes such a winding route along the St. Regis River as it climbs toward Lookout Pass on the Montana-Idaho border?

WHITEFISH — Sunday was supposed to be the opening skirmish in “the battle of the flat-tops” — a Montana Broadcasters Association-sponsored debate between U.S. Sen. Jon Tester, D-Mont., and Matt Rosendale, Montana’s state auditor and insurance commissioner who won the June 5 primary vote to become the Republican nominee for Senate. 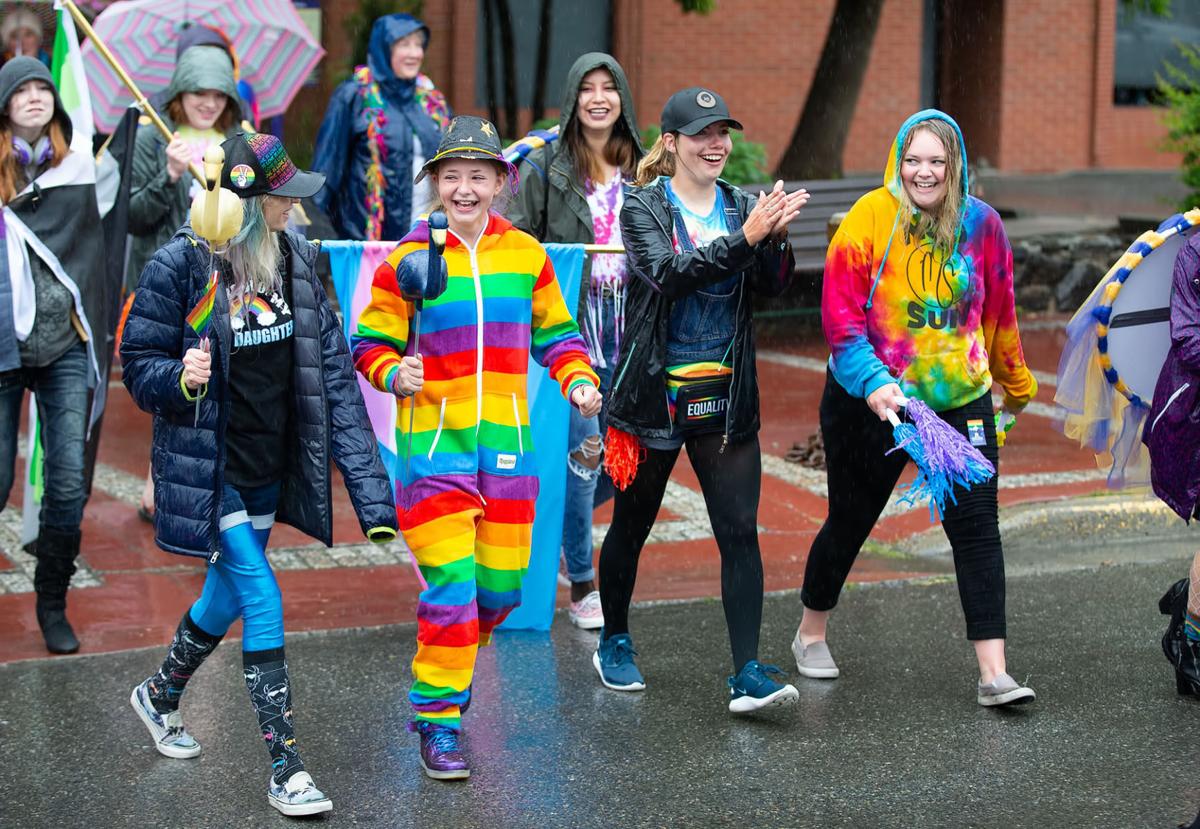 Pouring rain didn’t dampen the 25th Annual Big Sky Pride Parade and Rally as it made a return to Helena with hundreds marching down Last Chance Gulch.

Many of the Big Sky Pride marchers carried rainbow flags or wore rainbow clothing as a symbol of their cause. 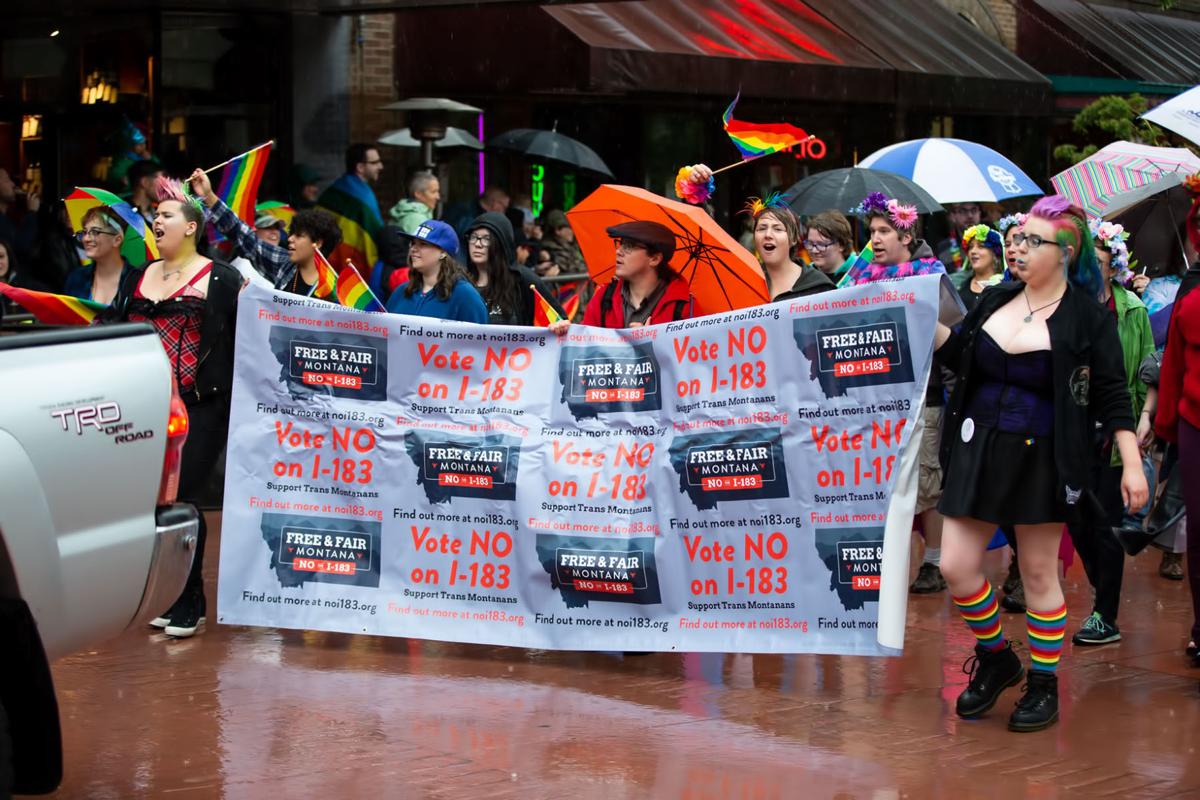 Big Sky Pride marchers hold a banner in opposition to I-183, a citizen initiative that would require a person to use restrooms or locker rooms in accordance with the gender on his or her birth certificate. 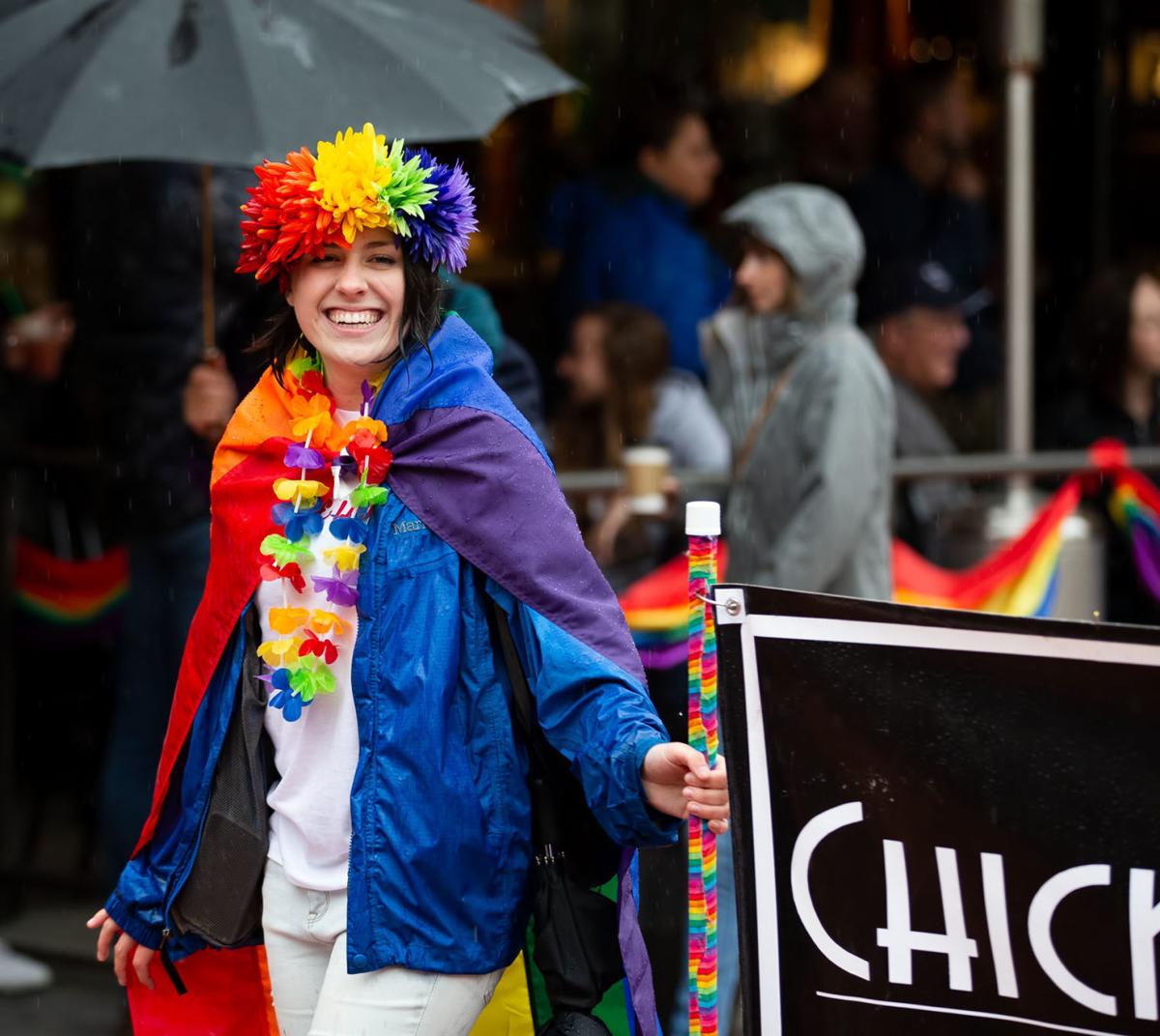 Chicks with Sticks drummed on buckets as chants such as “Hey hey, ho ho, bigotry has got to go” echoed down the Last Chance Gulch. 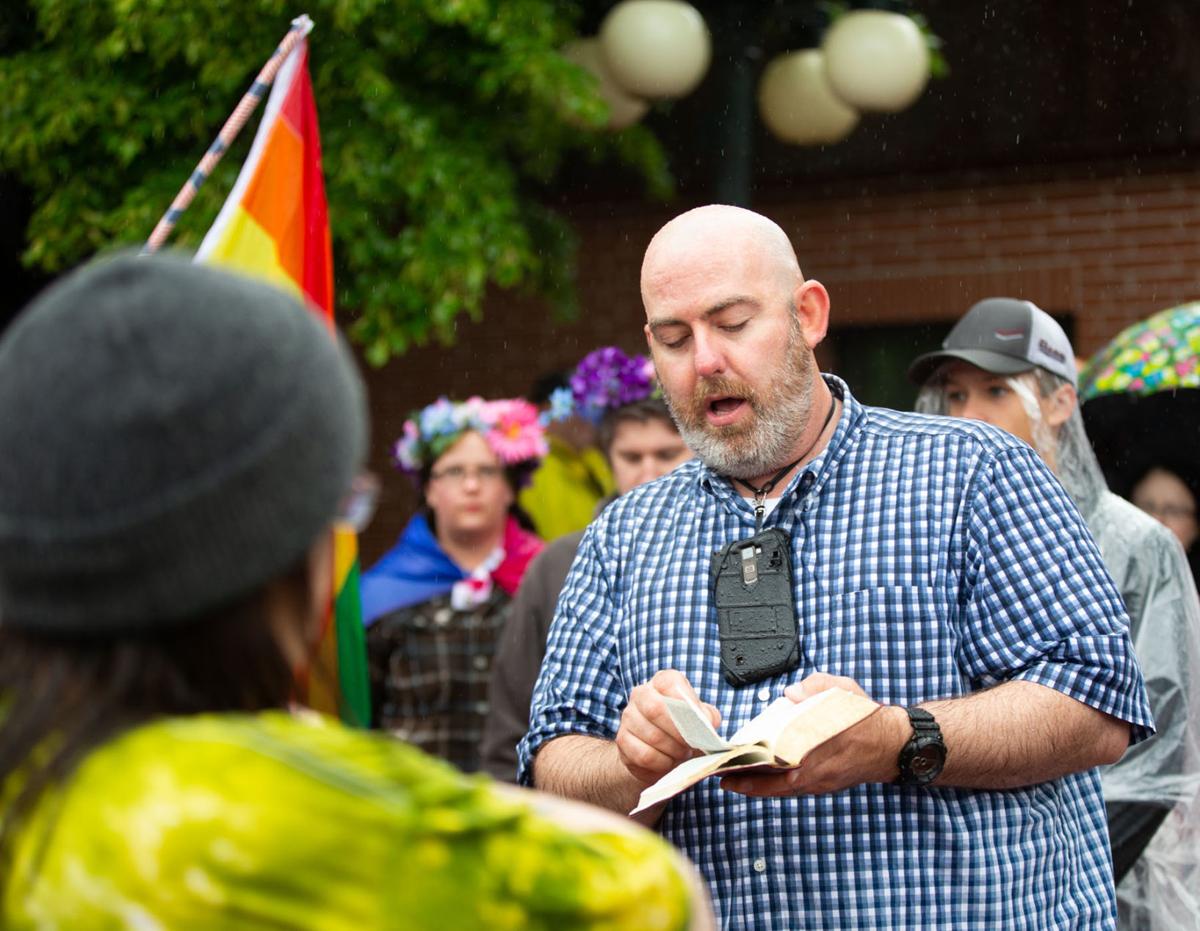 A protester at the 25th Annual Big Sky Pride parade was shouted down by participants Saturday in Helena. 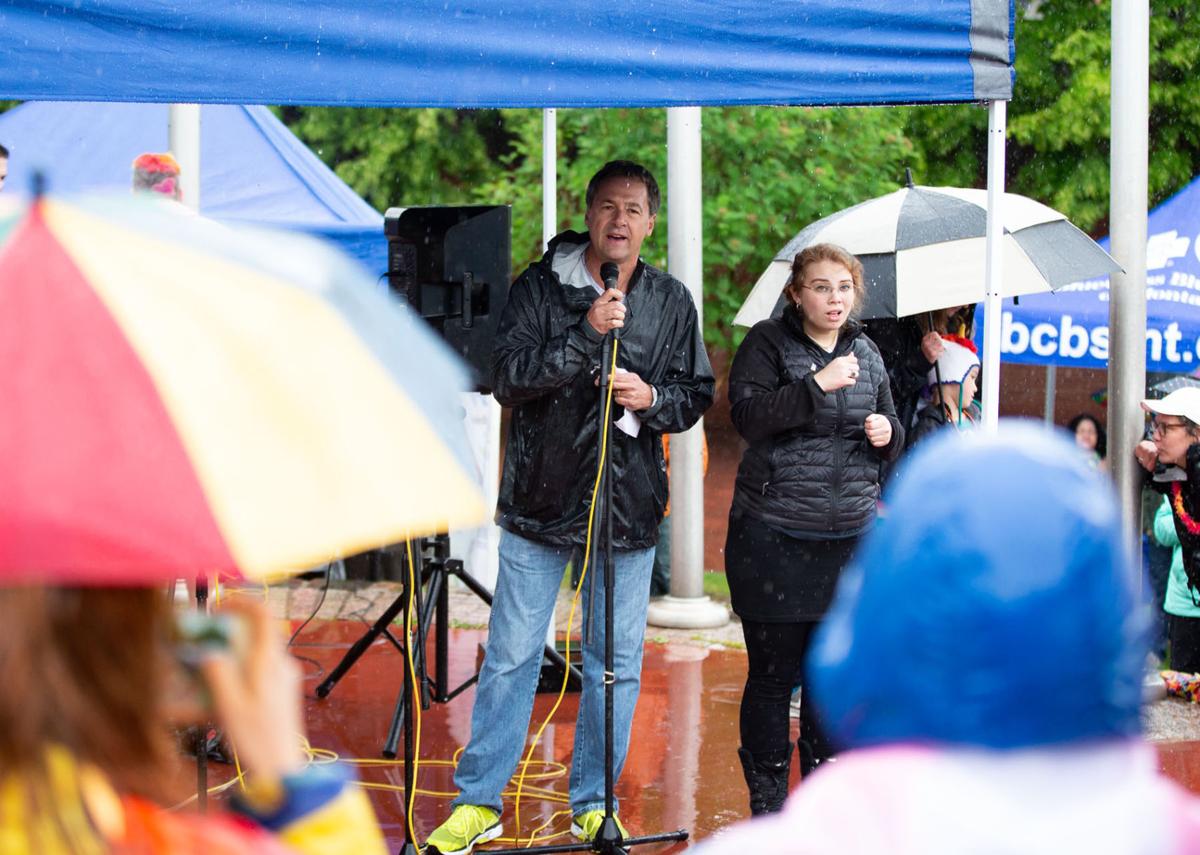 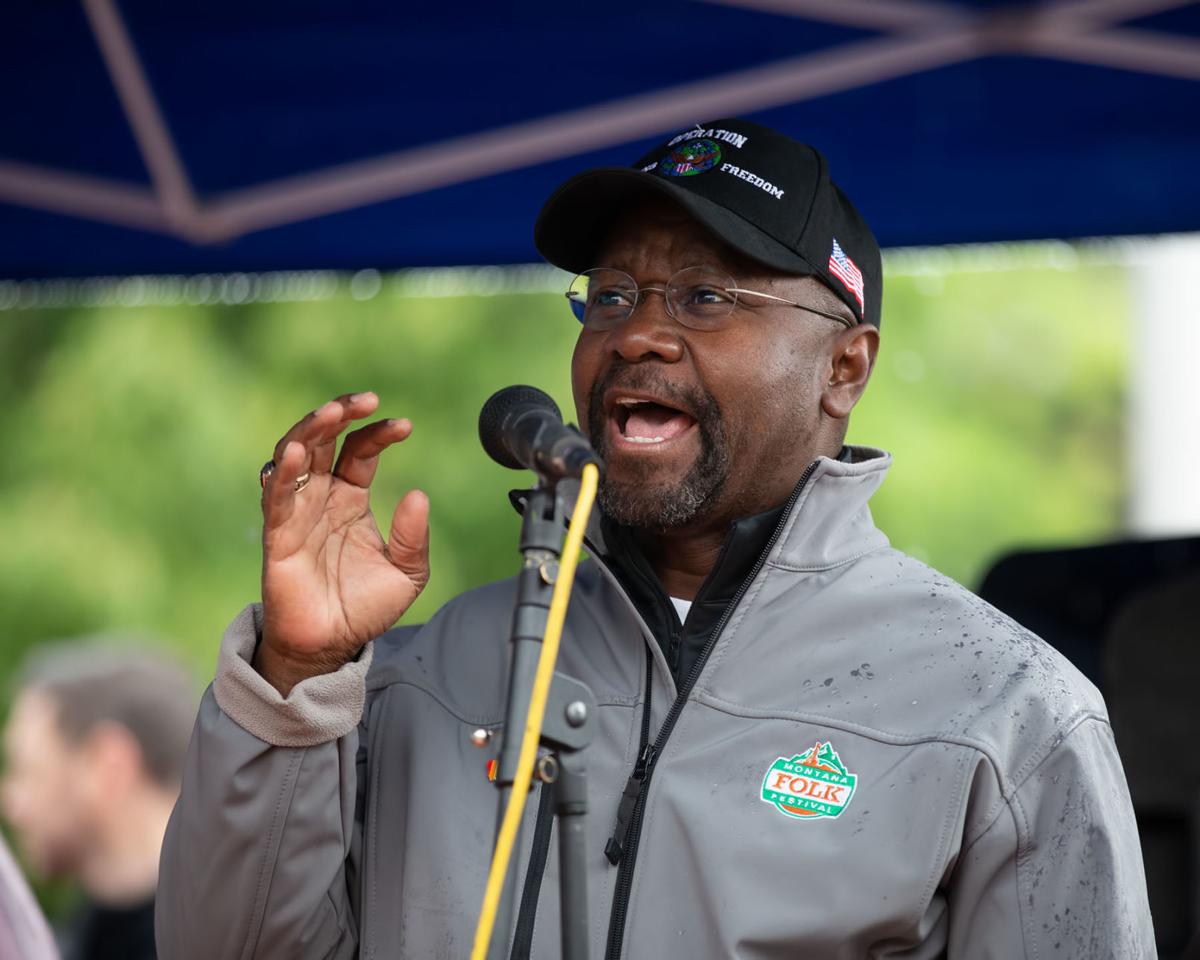 Helena mayor Wilmot Collins addresses the crowd gathered at Anchor Park for the 25th Annual Big Sky Pride in June of 2018 in Helena.

Not everybody embraced the rainbow theme at Saturday's Big Sky Pride Parade.

Marchers carry on the tradition of the first Big Sky Pride event held in Helena in 1993. 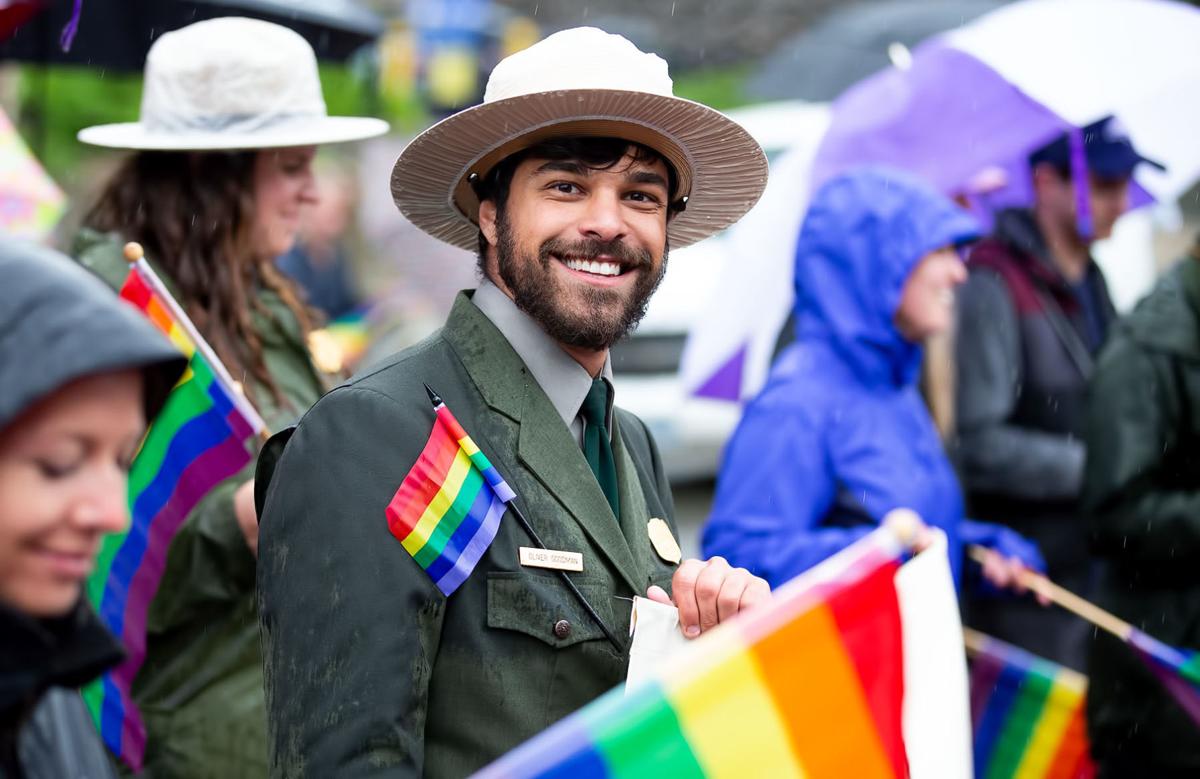 Many of the marchers carried rainbow flags or wore rainbow clothing as a symbol of their cause.