Aaron Birkholz sat at a red picnic table outside Coyote Coffee, one of his two family-owned small businesses in Lincoln. As if managing two family businesses wasn’t enough, Birkholz estimates that he works 30 hours per week as the head of Lincoln Ambulance, a rural volunteer Emergency Medical Service (EMS).

In each case, they’re lucky if half those volunteers show up for a call.

“The downfall for us, because we’re volunteer, is that it’s not mandatory that we’re going to respond,” Birkholz said. “You could dial 9-1-1, be having a heart attack, and no one would show up because we don’t have enough staff.”

This lull in volunteer activity is putting strain on the people who do show up, and can have far worse effects on those who need them. Rigorous training and certification processes, extensive time commitments and a shift in values may be at play.

According to Birkholz, this aspect may be pushing potential recruits away. Volunteers don’t get paid and licensing isn’t cheap — participants have to pay for books, exam registration and license fees out of pocket. Birkholz tries to mitigate these costs by reimbursing people after they take the class, but it doesn’t seem to help with recruitment.

Further, the time commitment puts up a barrier between potential volunteers and the workforce. Maintaining a license takes hours of yearly training, not including the time spent in the field. According to Birkholz, the average round-trip call time is about four hours for Lincoln Ambulance. Multiply that by the estimated 100-150 calls each year, and volunteers can expect a massive time commitment to tack onto their normal schedules.

As head of the ambulance, Birkholz carries much of that weight.

For Charles Taylor of Augusta Ambulance, the same is true. Round-trip call time is about five hours or more, depending on road conditions and the caller's distance from town.

“Sometimes we might have an hour even getting to our victim, especially if they’re up at a trailhead,” Taylor said. “A lot of times we have to carry our person quite a ways because they may get injured a mile up the trail. That can be kind of tricky.”

Ken Crymble is a 74-year-old volunteer firefighter with the Lincoln Fire Department, and although he doesn’t take medical calls, the fire department and EMS are so close-knit that he knows what they go through. He has aged alongside the changing field, and watched as training got harder and more time consuming while enrollment dwindled.

“Bless my wife’s heart, she’s been with me for 50-some years,” Crymble said. “I spent a lot of time at the fire hall, and I don’t think these kids have that time anymore.”

He also said that even though the volunteer fire department has its own demands and struggles, the EMS team has a harder time finding recruits that will make the commitment.

“If you look at the demand they have to be a paramedic today, well, I’m not even sure that’s what my doctor had to have back in the day,” Crymble said. “Just the demand on those people and what Aaron does, they work hard to get those kids trained and keep that training up to date.”

Maybe potential volunteers are dissuaded by the time commitment, or maybe it has something to do with the changing values of young people in small towns — the few that are there, anyways. The three rural communities are comprised primarily of retirement-age populations, but among the young folks that live there, the chiefs see a common thread of shifting ideals.

“It’s a little disheartening,” Taylor said. “It should be a community priority. I guess we just look at things a little differently. We’ve got some great young members who have been just outstanding, though.”

The ones who are dedicated to the work are indispensable, but they’re hard to come by — in Augusta as well as Lincoln and Wolf Creek.

“Lincoln is small,” Birkholz said. “It’s hard for people to find jobs here. Either the young people are way too busy or they’re not here — or they’re just not into volunteering for the community. It’s not for everybody.”

“You could dial 9-1-1, be having a heart attack, and no one would show up because we don’t have enough staff.”

Though rural volunteer EMS are making it work as best as they can, more hands would help. Birkholz estimates that for his department to function as well as he’d like, he'd need 10 EMTs and 10 Emergency Medical Responders (EMRs), which are a step below EMTs in training.

He has a few volunteers that have gone through the courses, taken the tests and are ready to start, but are waiting for the state to accept their license application. According to Birkholz, that process can sometimes take between two and three months.

“We’re coming up on the busiest time of our year, and we’re struggling because I’ve got EMTs that are waiting, but they’re not state licensed yet,” Birkholz said. “They’ve passed the test, they’re nationally registered, it’s just getting that state license."

As with rural fire departments, rural EMS depend heavily on mutual aid agreements. For Stacy Schmidt, the head of Wolf Creek Ambulance, the job would be impossible without backup. Schmidt has a full-time job with Montana Fish, Wildlife & Parks in Helena, and has a hard time making it to calls.

Of her four volunteers, one works in Helena, one is a rancher with little time to spare, and two just finished their EMT classes. Although her volunteers are dedicated, it’s more a matter of availability. Schmidt relies on the I-15 Quick Response Unit (QRU) to make the majority of Wolf Creek’s calls.

“The burden has fallen a lot upon the I-15 QRU for the last few years, because it was just us two — me and the rancher — and we were basically never around,” Schmidt said. “They’ve picked up a ton of slack for us.”

Schmidt would like to see more volunteers on the roster, but for now it’s just her, her four-person staff, the constant guilt of wanting to do more, and the inability to make it happen.

For the ambulance heads and their few dedicated volunteers, the personal cost of a staff shortage can be high. Birkholz and Taylor have missed holidays and birthdays, and frankly, they’re getting tired.

“Even though there’s only a few of us, we are that dedicated to where we try to pick up the slack,” Birkholz said. “It’s just wearing us out. That’s with volunteering anywhere — you can only go so long before you burn out.”

Though they may be worn out, undercompensated and understaffed, there’s a reason why they do what they do. They each joked that there might be something wrong with them or that they’re workaholics, but it’s more than that. It's a need to help others and give back to the community, and those who have it know that it’s in their blood.

“I think the satisfaction of seeing other people happy, and then the few calls that I really make a difference in their lives, that’s enough right there (to keep me going),” Birkholz said.

This is the second in a two-part series about the volunteer crunch faced by emergency response organizations in rural Lewis and Clark County.

The attendance of four Roman Catholic priests from Montana at President Donald Trump's political rally in Great Falls Thursday has created a social media firestorm and apparently incurred the displeasure of the priests' superiors in the church.

OTTAWA, Ontario — Two travel bloggers who received jail time after they were seen walking on a famous hot spring in Yellowstone National Park were among three people who died Thursday after they went over the third-tallest waterfall in British Columbia.

The Missoula County Sheriff's Office is calling it a "miracle" that a 5-month-old infant allegedly abandoned in the woods near Lolo Hot Springs was found alive nine hours later buried under a pile of sticks and debris.

Based on a vote count released Monday, it doesn't look like there is enough support to call a special session of the Legislature this month to…

A Helena judge is ordering the Montana Green Party removed from the ballot this fall, saying the group did not submit enough valid signatures …

Caitie Sauter has been found in Helena and is OK, the Helena Police Department reported.

After beating cancer, young survivors learn to fly as part of camp that landed in Helena

In the hazy heat of Tuesday morning, four tiny passenger planes touched down one after another on a runway in Helena. Climbing out of the plan…

Lewis and Clark and Jefferson counties are banning the open burning of debris due to the risk of wildfire.

Lewis and Clark County plans to increase its annual spending by $15.4 million for the 2018-19 fiscal year, largely to account for jail constru…

Dr. Richard Buswell is well-known in Helena as an allergist, a job he held for decades at St. Peter's Health. Outside of Helena and in the art… 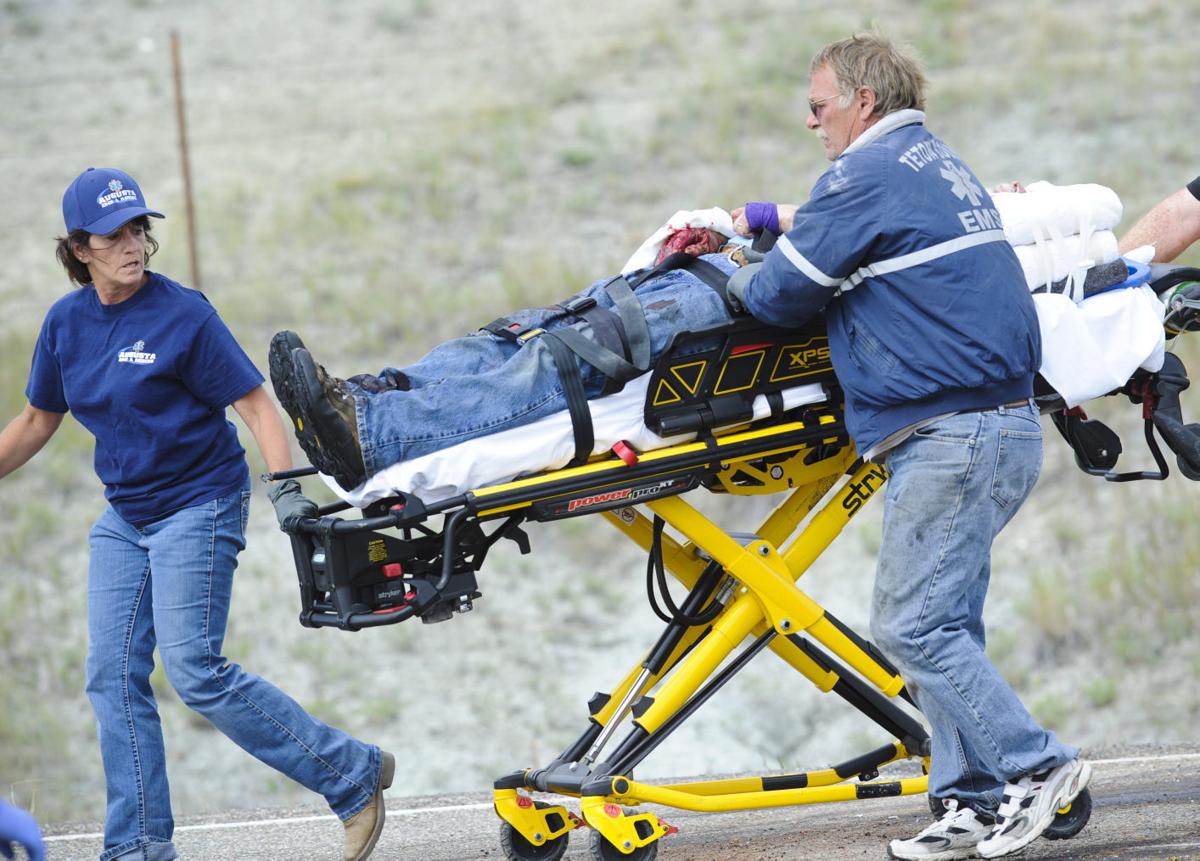 Volunteer EMTs rush a victim to an ambulance after a head-on collision on Highway 287 in this file photo. Rural Emergency Medical Services in towns like Augusta, Lincoln and Wolf Creek are having an increasingly hard time finding enough volunteers. 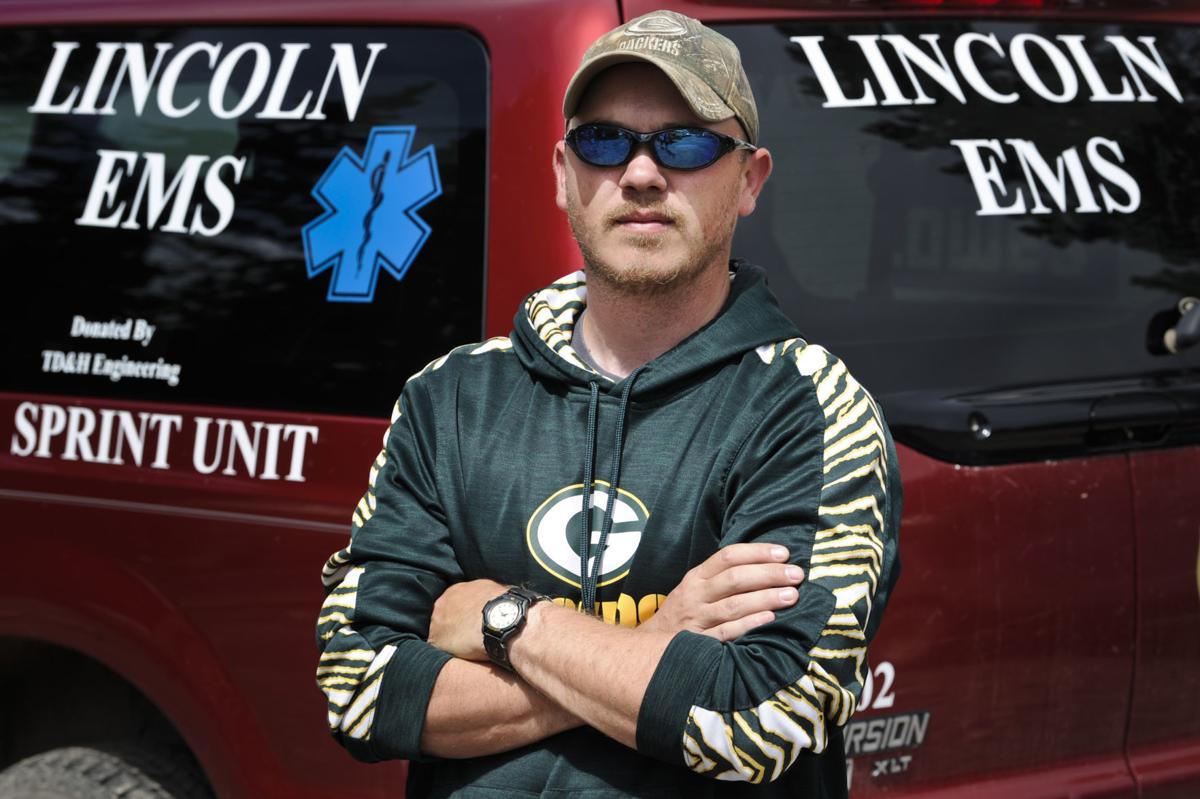 Aaron Birkholz estimates that he works 30 hours per week as the head of Lincoln Ambulance, a rural volunteer Emergency Medical Service. 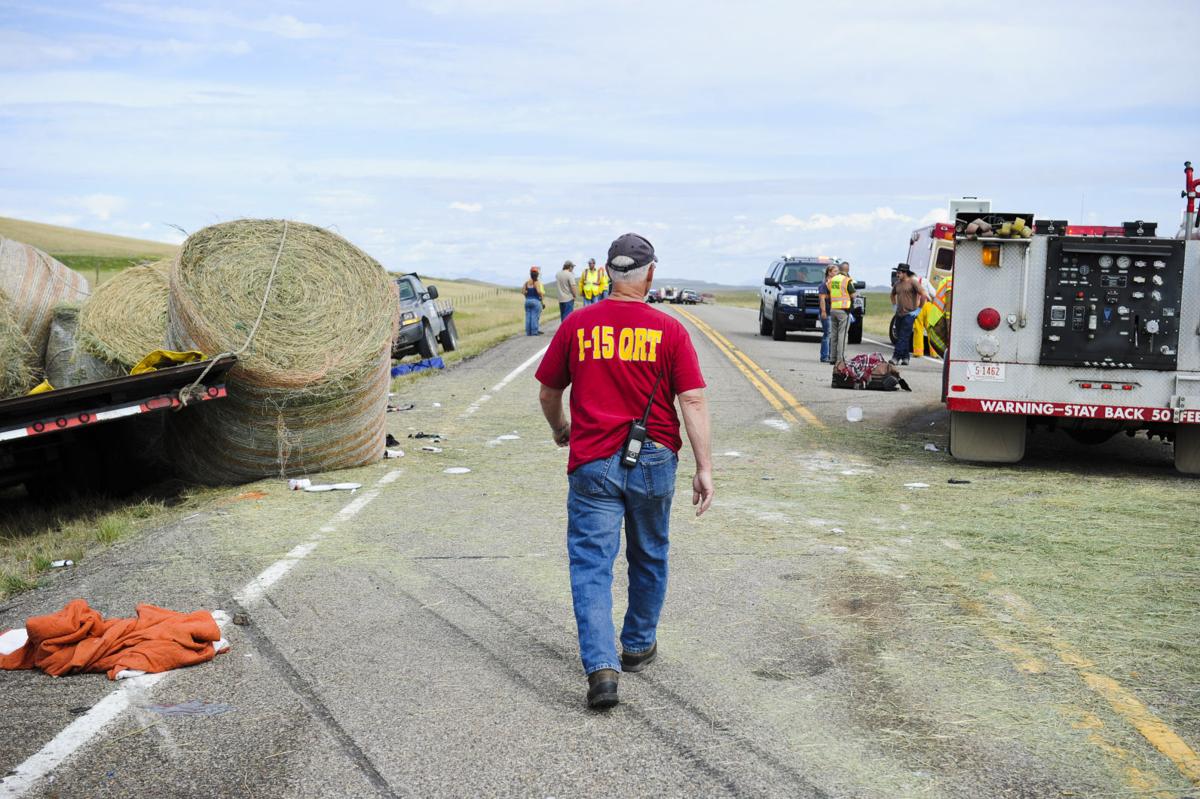 A volunteer with the I-15 Quick Response Unit surveys the scene of a head-on collision on Highway 287 in this file photo. With a staff of just five people, Wolf Creek Ambulance relies on I-15 QRU to answer many calls. 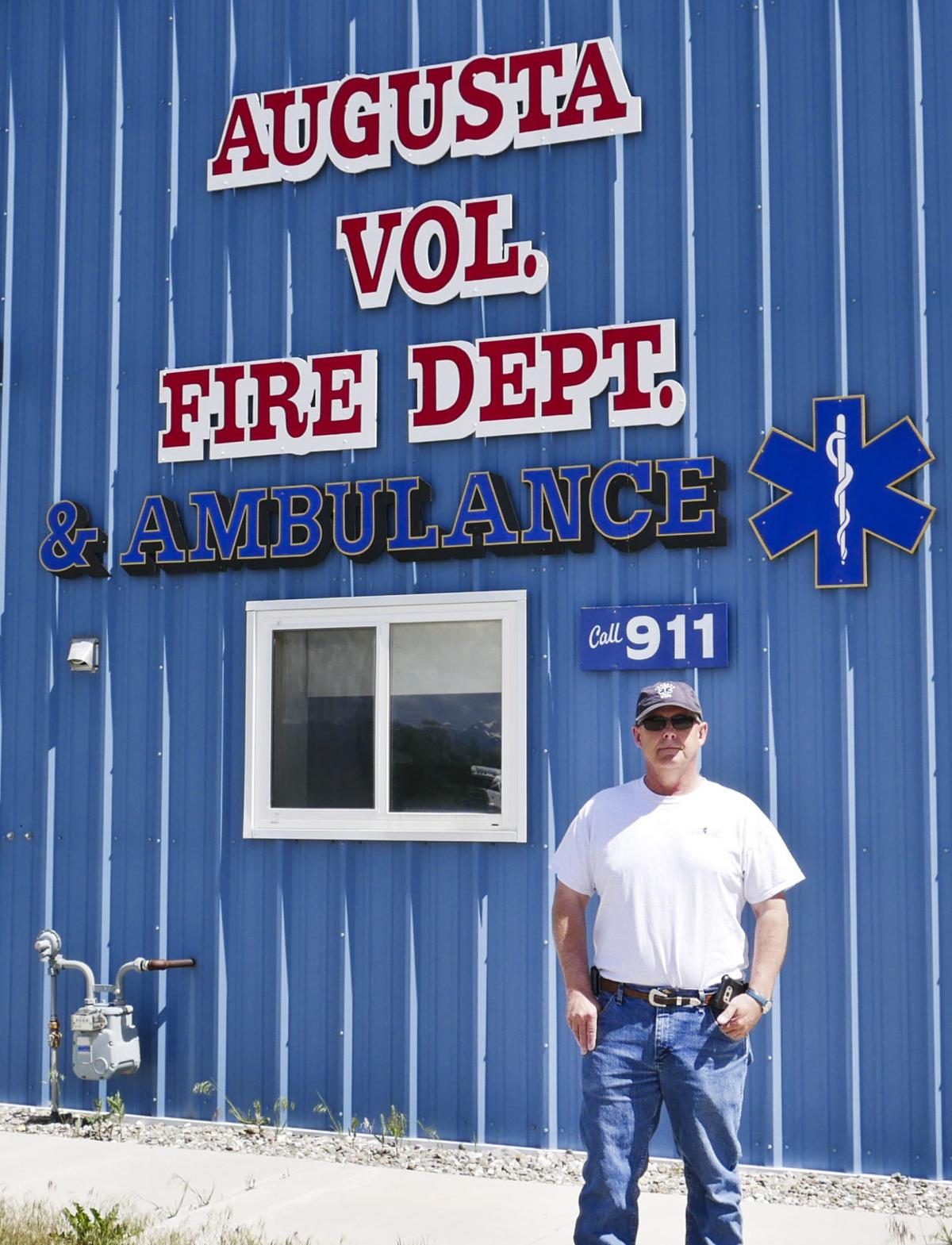