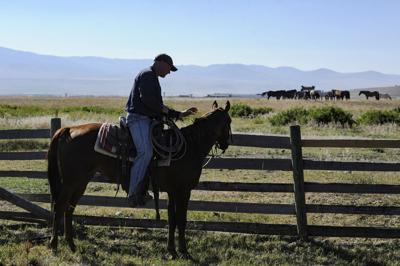 Pickle keeps yawning, tired from her short, morning ride and a longer ride the day before.

She’s 3 years old, and David Toman, Montana State Prison inmate and member of the cowboy crew for three years, is by her side. She keeps nudging Toman, her caretaker, with her head as if to say "Are we done yet? Can I rest now?"

“She stole my heart. We went for a small ride, and she’s already tired,” said Toman as Pickle yawned a third time.

Pickle was among the 58 horses rescued from a horse breeding ranch in the Helena Valley in 2021. In April of 2022, the Montana Correctional Enterprises’ (MCE) cowboy crew at the Montana State Prison Farm and Ranch received six fillies and eight studs for cattle herding, while other horses went to the Bella Dae Rescue Foundation in Great Falls.

In 2018, an animal control officer responded to a call of a horse caught in a barbed wire fence. While at the ranch, the officer spotted barren pastures, debris on the ground, and sections of wire that hadn’t been upkept.

The officer continued to monitor the situation until a search warrant for the Helena ranch was granted on June 1, 2021. The 58 horses were then seized and transported to the Lewis and Clark County Fairgrounds, where they were cared for, according to prior Independent Record reporting.

The Lewis and Clark County Sheriff’s Office seized 58 horses Tuesday from a north Helena Valley ranch, where it was believed they were being n…

“When they arrived, they were malnourished, and you wouldn’t recognize them. I’m sitting here (looking at the rescues today), and I don’t recognize them. They’re healthy. Their hooves are trimmed. They’ve been vaccinated. You would have never got this close to them (when they were rescued),” said Lewis and Clark County Sheriff Leo Dutton. “What I’m most happy about is that we changed (the horses’ lives) initially, and now they’re changing everyone else’s lives.”

Veterinarian examination found horses that were underweight, had overgrown hooves, and had lice and abdominal hernias.

The Lewis and Clark County Attorney’s Office filed a felony aggravated animal cruelty charge against each of the three men who ran the horse breeding operation. One of the men pleaded guilty, one was found guilty by a jury, and one entered into a deferred prosecution agreement.

Larry and Sam Heigh of Helena took care of the rescued horses for over a year. Before the 2021 winter, the horses were moved from one end of the Lewis and Clark County Fairgrounds to the other when pens were built in the barn area. There were about five or six to a pen, and the Heighs had to get up around 6 a.m. to go and feed them, going through 10-12 round bales of hay a week.

“To see where they have come from, including the older horses that were in such bad shape, they’re all just fat, shiny and happy,” said Sam. “They get brushed, they get fed and they get all the things that they need, so that’s what is really nice, seeing them happy, healthy and doing something. Horses need to have a job, and to see how these horses are going to work (with the cowboy crew). They’re young enough that they will last them a long, long time.”

Before retiring, Larry worked as the special operations officer at the Lewis and Clark County Sheriff’s Office. He was working on a radio project with the sheriff’s department when he was approached about taking care of the horses. He did this up until his retirement in May of this year, and then he continued volunteering with the horses.

“Look what we got going on (with the cowboy crew and the rescued horses). It’s the best thing I’ve ever seen,” said Larry. “There was a picture Ross (the MCE’s agriculture director) sent me a couple weeks ago, and these horses were tied up on the fence line here. ‘Outstanding.’ That’s the one thing I sent back to him.”

Ross Wagner is the MCE’s agriculture director, and he oversees operations such as the range cattle (cowboy crew), dairy, irrigation, fire crew and community workers, around 90 inmates total.

“They’ve got 10 to 12 rides on (the horses) already. We’ll get 25 to 30 rides on them and then we’ll put them up for the fall and use them again next spring,” said Wagner. “We do the vaccinations, but (the inmates) are in charge of shoeing, training, and more. Each one of these guys is in charge of four to six horses to give them a little self worth and make sure they’re accountable for their horses… Very few (on the cowboy crew) have prior experience (with horses).”

Wagner stated that the cowboy crew program has been around for about 40 years. The director before him was there for 30 years, and he’s been there for the past 10 years.

Four other fillies are saddled up next to their caretakers in front of the backdrop of the Flint Creek Mountain Range.

Pepper is another 3-year-old with speckles of brown, white and black mixed into her coat. Bill Bracha, inmate and member of the cowboy crew since November, is her caretaker. He says she’s only tried bucking him off twice, once in the round pen and once out on a ride.

“(Cowboy crew) has brought me back to realizing what I want to do with the rest of my future. I grew up in a small town and did a lot of odd jobs and ranching jobs and worked at a big ranch over in eastern Montana. I guess I lost track of where my priorities were,” said Bracha. “It’s very rewarding having a horse, just the progress you see in them. They saved me as much as we saved them.”

Bracha has a job breaking in horses lined up for when he gets out.

Sienna, or Fox, as Daniel Lloyd, inmate and member of the cowboy crew since December, likes to call his horse, is as tall as she is auburn. Lloyd has no prior experience ranching, but has learned a lot over the past few months with the cowboy crew.

“We get up, get them grained and saddled. We started with small rides, but pretty soon, we just get hours and miles (on the horses), very gentle, but they were wild when we got them. I had to rope her to catch her, but then we got her halter broke and broke the lead. It’s been leaps and bounds since then,” said Lloyd. “I’m pretty attached to Fox. I baby her pretty hard, and she’s spoiled.”

Dave Paroehl and Evan Eggebrecht are two of the staff who supervise and work with the cowboy crew. When inmates are first assigned to their division, they show them the ropes on how to take care of horses, riding and more. Paroehl rides the filly named Friday and Eggebrecht rides Trinity, both among the rescued Helena horses.

“There's about 12-13 guys (on cowboy crew) right now. We usually have three main cowboys (highly trained ranching inmates) and a couple of guys trained up in reserve in case one of them leaves,” said Paroehl.

“There’s no typical day,” Eggebrecht said, and Paroehl agreed. “You may come to work one day with a game plan but might have four or five guys in for mental health or something like that, so you have to change your game plan. Lots of on-the-fly stuff."

Paroehl said the rescued horses were nervous about cattle herding because none of them had ever seen a cow before coming to the Montana State Prison Ranch and Farm. Eggebrecht added that not only had they never seen a cow, nobody had ever ridden the horses before they arrived at the prison either.

"(The cowboy crew) thought it was all pretty cool when we told them they were the first people to get on the back of these (rescued horses),” said Eggebrecht.

The three members of the cowboy crew and the two staff supervisors hopped on their five rescued fillies. The sixth rescued horse was tied to the fence, neighing every now and then in the early morning sun. Not one horse bucked, a testament to good training.

One horse, Friday, was excited because she believed the riders in saddles meant that they were going to herd cattle soon. The other horses walked around at their own pace, waiting for the horse treats promised at the end.

“You guys come across any more horses, send them our way,” joked Lloyd from Fox’s saddle.

Megan Michelotti can be reached at megan.michelotti@helenair.com.

Many of the international scholars had never seen or heard of Montana before.

Helena Public Schools is reaching out to the community to help address a shortage of bus drivers for the 2022-2023 school year.

The Helena City Commission received 12 applications for the vacant seat on the governing body by its 4 p.m. Monday deadline.

Gianforte honors Helena veterans for service on battlefield, in community

Two Helena veterans were awarded the 2021 Montana Governor's Veteran Commendation Monday for their service to both country and community.

A subdivision and a Hutterite colony in Lewis and Clark County received more than $1 million in American Rescue Plan Act funds for water and sewer upgrades.

A 14-year-old boy from Laurel was pronounced dead Tuesday after drowning Monday in Canyon Ferry Reservoir about 20 miles east of Helena, officials said.

The Legend of Zelda: After 4 years, Helena family reunited with missing cat found in Nevada

The family still doesn’t know how Zelda got to Nevada, or her whereabouts during the two-year gap before she was taken in by an older woman in Nevada.

The Salvation Army partnered with the Helena Police Department and Lewis and Clark County Sheriff’s Office to host the “Shop with a Cop” School Clothes Shopping Spree.

"It's extremely dangerous," the prison's union president said this week.

Two males were shot by an unidentified suspect around 1 a.m. Thursday in Helena, police said.

A corrections department spokesperson said Thursday the prison has contracted with a third party to change the workplace culture "by promoting solution-oriented thinking rather than blaming." 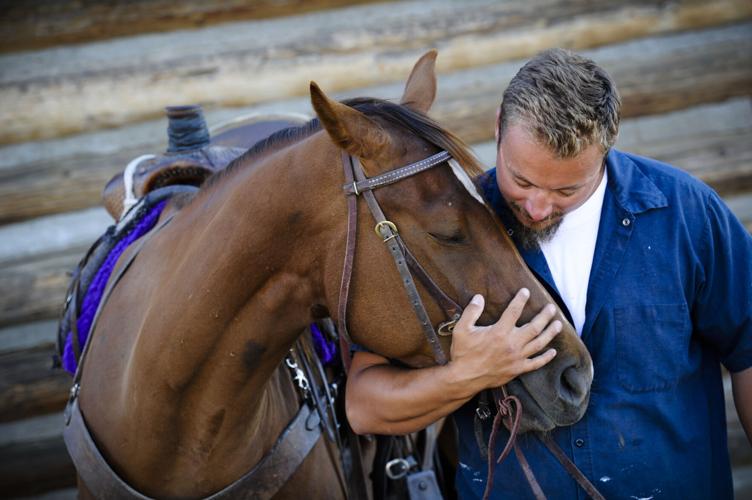 Montana State Prison inmate and member of the prison's "cowboy crew" David Toman embraces Pickle, a 3-year-old horse he cares for and uses to work cattle on the Montana State Prison Ranch. Pickle was among the 58 horses rescued from a horse breeding ranch in the Helena Valley in 2021. 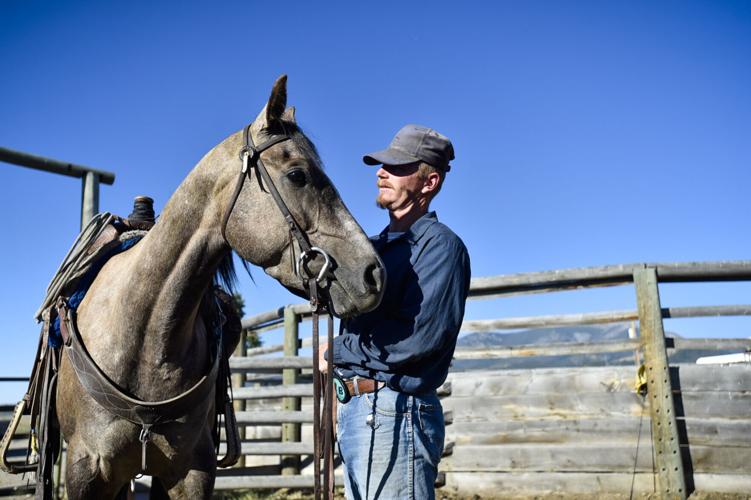 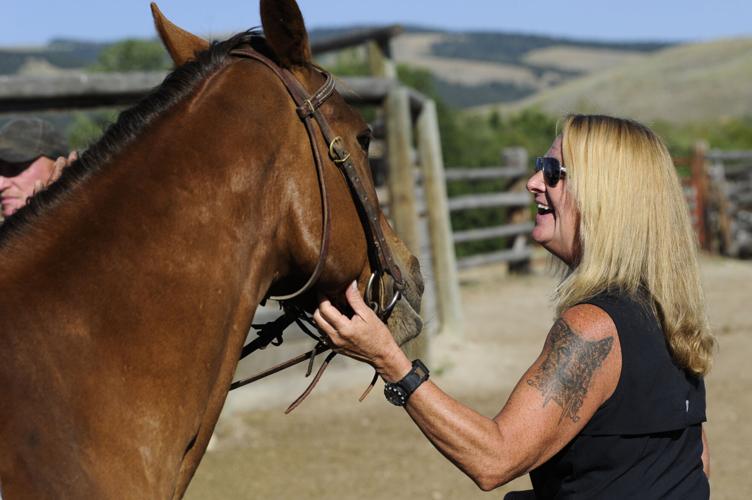 Sam Heigh, who cared for the neglected horses for over a year, visits one of them during a recent reunion at the Montana State Prison, where some of the horses live now. “To see where they have come from, including the older horses that were in such bad shape, they’re all just fat, shiny and happy,” Heigh said. 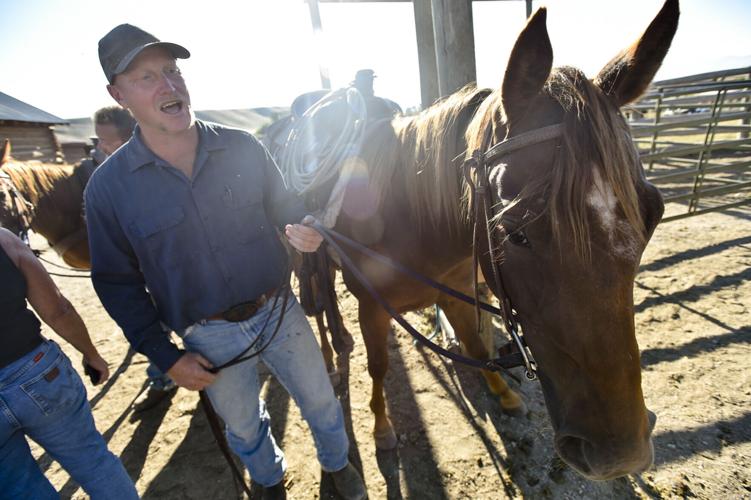 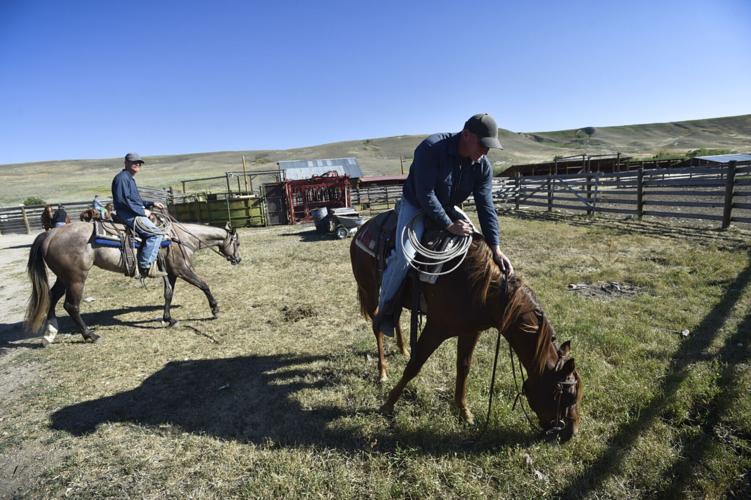 Daniel Lloyd and Bill Bracha take their horses for a ride at the Montana State Prison Ranch. 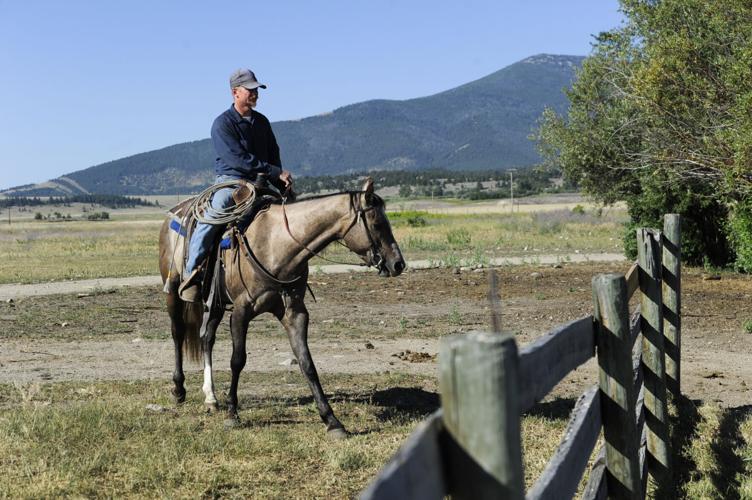 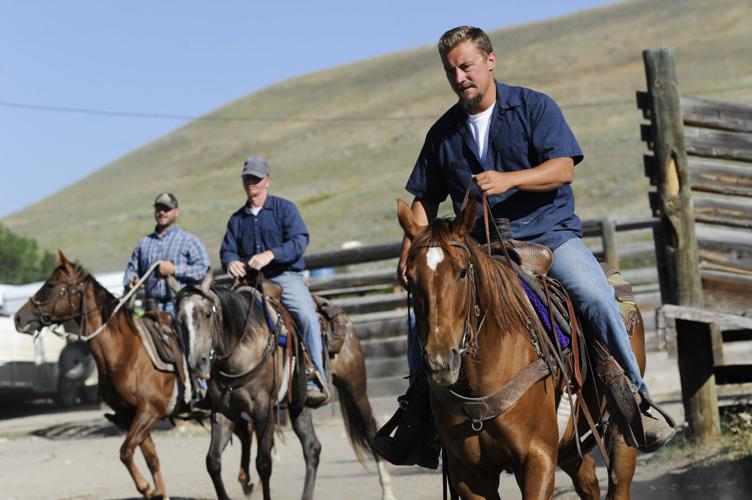 David Toman leads Pickle for a ride at the Montana State Prison Ranch last week. Pickle was among the 58 horses rescued from a horse breeding ranch in the Helena Valley in 2021.