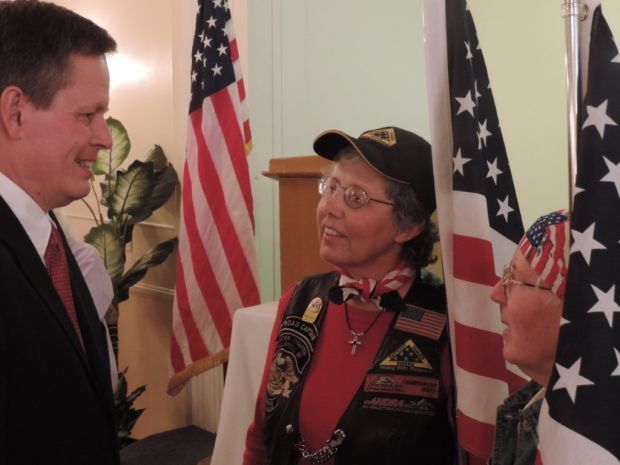 Republican U.S. Senate candidate and Montana Congressman Steve Daines, left, talks with Barbara Crawford of Columbia Falls and Pamela Dylina of Lakeside (right), members of the Patriot Guard Riders, who attended a ceremony at the Florence Hotel building in Missoula last week where Daines handed out three Purple Heart medals to veterans and their families. Daines is the odds-on-favorite to win Montana’s open Senate seat, in his race against Democrat Amanda Curtis and Libertarian Roger Roots. 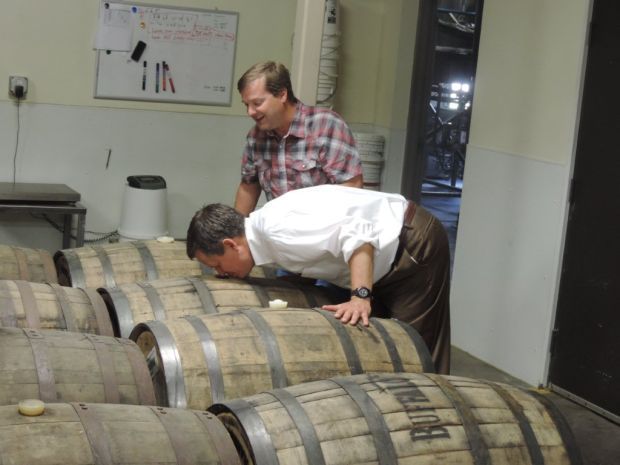 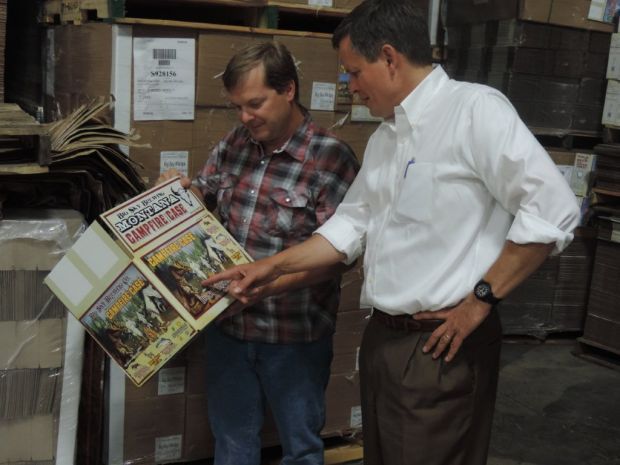 Republican U.S. Senate candidate and Montana Congressman Steve Daines, left, talks with Barbara Crawford of Columbia Falls and Pamela Dylina of Lakeside (right), members of the Patriot Guard Riders, who attended a ceremony at the Florence Hotel building in Missoula last week where Daines handed out three Purple Heart medals to veterans and their families. Daines is the odds-on-favorite to win Montana’s open Senate seat, in his race against Democrat Amanda Curtis and Libertarian Roger Roots.

“Everywhere we go, there are stickers, tags. … It is virtually impossible for us to be OSHA-compliant right now,” says Nabozney, referring to the federal agency enforcing workplace safety. “There are 60 CDs of regulations.”

Daines, Montana’s U.S. representative and a former software-company executive, nods his head and laments the hurdles that government throws in the path of the business owner.

It’s only a brief exchange during Daines’ day-long campaign swing through Missoula last week, but it encapsulates the message Daines has honed into front-runner status for Montana’s open U.S. Senate seat: He’s the candidate who knows and talks business -- and who can help pave the way for business expansion, to juice Montana’s economy and create more jobs.

“I think we need more men and women serving in Washington that bring skills learned outside of government to make government run more efficiently and effectively,” he says in an earlier interview. “Those are skills learned in the private sector. … I think those sort of skills are needed today in Washington, where our government is spending more than it takes in.”

Daines, 52, has drilled home that message for many months -- and watched as his Democratic opposition struggled, imploded and had to reboot, leaving him the clear favorite in a race once seen as a key battleground in Republicans' attempt to win party control of the U.S. Senate.

Democratic U.S. Sen. John Walsh, appointed to his seat in February by Gov. Steve Bullock, withdrew as a candidate in August after it was reported Walsh had plagiarized his 2007 master’s degree final paper at the U.S. Army War College.

Curtis started her campaign just 80 days before the election and said last week she’s raised about $500,000 in campaign funds and may start airing her first TV ads two weeks before Election Day.

Daines, who officially began his Senate campaign 11 months ago, has raised $6.8 million and been on the air with campaign ads since early this year.

That campaign has presented Daines as an unabashed ally of business and, particularly, natural-resource development, as he says Montana can return to its economic glory by developing timber, coal, oil, gas and agriculture.

“It’s been the foundation of building this country and it is how we’ll continue to prosper for the longer term,” Daines says. “And it also ties in to keeping low-cost energy … and energy security.”

Daines is a social conservative -- he thinks abortion should be illegal except to save the life of the mother, and opposes gay marriage -- but mentions these issues only if asked about them.

He also has a strongly partisan, conservative voting record during his first year or so in Congress, voting with fellow House Republicans to oppose the president nearly 90 percent of the time.

However, he says his approach to issues is “pragmatic,” reflecting his business record of getting things done, and that he wants to work with Democrats, Republicans and all interest groups to find compromises that will lead to better-paying jobs in the state.

Daines, who grew up in Bozeman and has a chemical engineering degree from Montana State University, is a relative newcomer to Montana’s political scene -- although he first dabbled in politics some 35 years ago.

Daines worked on GOP campaigns as a teenager, was president of the MSU College Republicans and became one of the youngest delegates to the Republican National Convention in 1984 as a Montana delegate supporting Ronald Reagan for president.

He also says his parents had been strong Democrats, but that family politics began to change when his father, Clair, started his own construction business, and saw government regulations often hindering the way.

After graduating from MSU, however, Daines pretty much left politics behind for two decades, as he fashioned his business career and raised a family. He and his wife, Cindy, have two daughters and two sons; his oldest son got married on Saturday.

Right out of college, Daines joined consumer-products giant Procter & Gamble, starting as a junior manager in Iowa City, Iowa. He ended up in China eight years later, overseeing portions of the company’s expansion into the Chinese market, manufacturing and selling consumer products in China.

Democrats have criticized Daines as working to export U.S. jobs, because Procter & Gamble scaled back its U.S. workforce and closed some American factories as it expanded into China in the early 1990s.

Both Daines and company spokesmen have said the charge is inaccurate, because Procter & Gamble expanded into China only to sell into the Chinese market, increasing rather than transferring any part of its overall business.

“Nothing that we produced there, not a single product, ever shipped back to the U.S.,” Daines says. “We were focused on growing market share for an American company.”

Daines returned to Bozeman in 1997 to work for his father’s construction and real estate development firm, but three years later he would hook up with the company that made him and many others in Bozeman multimillionaires: RightNow Technologies, a software-development startup.

Daines and his father helped RightNow co-founder Greg Gianforte develop the company’s new campus southwest of Bozeman and Daines then joined the firm as head of customer service. He later worked as a vice president in charge of sales, helping the firm grow from a few dozen employees to more than 1,100, with customers worldwide.

Co-workers describe Daines as an effective executive who kept his cool under pressure -- and always hit his sales quotas.

“Steve is very thoughtful, he’s driven for success, he wants to do things the right way,” says Gianforte, who introduced Daines at the kickoff to his Senate candidacy last November in Bozeman. “He’s very high integrity. What that means at the end of the day is, people like to follow him.”

Daines didn’t get back into politics until 2007, when he led a campaign urging then-Gov. Brian Schweitzer, a Democrat, to convert most of a state-government budget surplus into tax rebates for business and citizens.

He then joined Republican Roy Brown as a running mate, challenging Schweitzer for the governorship. Brown and Daines lost by a 33-point margin -- but Daines wasn’t finished.

In late 2010, he announced he would challenge U.S. Sen. Jon Tester, D-Mont., in 2012. Yet when then-U.S. Rep. Denny Rehberg decided he’d be the Republican to take on Tester, Daines instead ran for Rehberg’s open congressional seat -- and won.

Four months into Daines’ first term as a congressman, Montana’s senior U.S. senator, Democrat Max Baucus, announced he would not run for re-election in 2014, ending a 40-year career in Congress.

Daines says supporters immediately started calling him and asking him to run for Baucus’ seat. After a few months of conferring with friends, family and political backers, Daines got into the race -- and immediately became a favorite, as Democrats could not field a tested, well-known candidate to oppose him.

On a sunny fall day last week, Daines rolled into his office in downtown Missoula, prepping briefly for a ceremony where he handed out three Purple Heart medals for soldiers who served in World War II, the Vietnam War and the war in Afghanistan.

Vietnam vet Don Rakow says when he looked into getting his medal, “I got a brick wall, everywhere I went,” before contacting Daines’ office. A month later, he says, he had his medal approved.

Daines, who pinned the medal on Rakow last Monday, credits his staff for cutting through the military red tape to get Rakow the medal and says his offices have the same customer-service ethic he adhered to in the business world.

“We hold ourselves accountable to the people,” he says to his Missoula staffers. “The government is to serve the people -- not the other way around.”

At the Big Sky Brewery on Missoula’s west side, Daines mostly talks business instead of politics, quizzing co-owner Nabozney about the company’s fits and starts toward becoming Montana’s largest brewery, led by its signature brown ale, Moose Drool.

Nabozney recounts the tale of naming the beer, whose iconic label is a drawing by his mother, Jane Lund, who got the idea after driving by a bar in Billings called the Moose Breath. Nabozney and his co-owners thought Moose Breath wouldn’t fly as a beer name, but one of them saw water dripping off the drawn bull moose’s mouth and said it looked like he was drooling -- and “Moose Drool” was born.

Before leaving, Daines tries the brewery’s Slow Elk Oatmeal Stout, sipping a sample at the tasting bar populated by a crowd of mostly college-aged men in baseball caps.

Later, Daines marvels at the long and winding road that a Montana brewery/business must walk to succeed -- and, the tale of Moose Drool’s name.

“That’s one of the best Montana stories I’ve heard in a long time,” he says.

On the way home to Bozeman, Daines is asked about his pro-business mantra, and whether it’s just another version of trickle-down economics, vowing to clear the tax and regulatory playing field for business and corporations with the hope that the benefits will “trickle down” to the average worker.

Daines answers the question the same way he answers almost any question about his philosophy.

“We need to make sure that we need to create an environment that has incentives for creating more, good, high-paying jobs,” he says. “I think we need to have a strong private sector.”

MISSOULA -- Standing before a political-science class at the University of Montana, long-sho…

A look at Steve Daines and RightNow Technologies

BOZEMAN -- At age 36, Steve Daines was working at his father’s construction firm in Bozeman …

A campaign profile on Democrat Amanda Curtis was published in the Independent Record Oct. 5.

Daines, Curtis to square off in only televised debate on Monday

BILLINGS – U.S. Senate candidates Amanda Curtis and Steve Daines square off in Billings tonight in their only televised debate before the Nov.…

An open U.S. Senate and House race top the ticket in Montana’s election Tuesday – but a pitched battle for one of two contested Montana Suprem…