There is a portion of highway on the thundering plains between Cascade and Great Falls where the spirit of a Montana legend known as “Stagecoach Mary” lives on.

Great Falls Rising, a grassroots citizens advocacy group, will do litter control along several miles of Interstate 15 as part of the Adopt-A-Highway program. It will be done in honor of Mary Fields, who lived in the area in the late 1800s and died in 1914. She delivered mail by stagecoach, according to some reports, and was said to use a wagon by others, and was the first Black woman to win a U.S. Postal Service contract and the second woman to hold a postal route, according to various histories posted online.

Stagecoach Mary was called into action again to help Montana in 2020, when then-Gov. Steve Bullock referenced her in a federal lawsuit claiming Postmaster General Louis DeJoy had harmed the Treasure State by impeding the flow of mail.

“The quickest applicant to hitch a team of six horses, Fields was already in her early sixties when she won the contract,” Raph Graybill, Bullock’s chief legal counsel, wrote in the Sept. 9, 2020 filing. “For eight years, she rode the 17-mile route between Cascade, Montana, and St. Peter’s Mission, braving harsh weather, wolves, and rough road conditions — while wielding a rifle and revolver to fend off bandits and thieves.”

"Rumor had it that she’d fended off an angry pack of wolves with her rifle, had 'the temperament of a grizzly bear,' and was not above a gunfight," History.com posted online. "But how much of Stagecoach Mary’s story is myth?"

Movie star and fellow Montanan Gary Cooper, in a 1959 issue of Ebony magazine, said Fields “could whip any two men in the territory” and “had a fondness for hard liquor that was matched only by her capacity to put it away.”

There is so much to her story. Fields was born to slavery in Tennessee about 1832, but an exact date is not known. After the Civil War she held various jobs and was sent to the Montana Territory in 1884 to help establish a school for Native American girls at St. Peter’s Mission, west of Cascade.

Her frequent use of profanity and temperament made the religious community uncomfortable, social media accounts state. In 1894, after several complaints and an incident with a male coworker "that involved gunplay," the bishop barred her from the convent and Fields moved to Cascade where she opened a tavern. It closed due to bankruptcy about 10 months later.

In 1895, Fields, then 60, won the contract for the delivery of U.S. mail from Cascade to St. Peter’s Mission. It was a job she held until 1903. She used a stagecoach to deliver mail and had the help of nearby Ursuline nuns, who relied on her for help at their mission, according to a history of her posted on the Great Falls Rising Facebook page.

She carried firearms to protect herself and the mail from wolves and thieves, driving the route with horses and a mule named Moses, according to online sources. Her reliability earned her the nickname “Stagecoach Mary” due to her preferred mode of transportation. If the snow was too deep for her horses, Fields delivered the mail on snowshoes, carrying the sacks on her shoulders.

According to online sources, Cascade closed its schools to celebrate her birthday each year. When Montana passed a law prohibiting women from entering saloons, Cascade’s mayor granted her an exemption. In 1903, at age 71, Fields retired from star route mail carrier service.

She died in 1914 at Columbus Hospital in Great Falls, and her funeral was one of the largest the town had ever seen, according to reports. She was buried outside Cascade.

There is a painting of Fields now on display in the lobby of the Montana Historical Society as part of a portraits exhibit, and a couple of books about her in the gift store.

When state officials in the 2021 legislative session failed to advance some legislation designating that portion of highway in her honor, Great Falls Rising decided to adopt a portion of highway and provide a community service. Shannon Wilson, who serves as secretary of the group, saw a portion of Interstate 15 that had not been adopted in the state’s litter cleanup program.

She remembers thinking, “Hey, that would be perfect for Stagecoach Mary.”

The group adopted a portion of the roadway that runs from mile marker 260 to 262 between Cascade and Great Falls.

The Adopt-A-Highway Program is a volunteer effort to keep the state’s roadways clean. People or groups adopt a two-mile section of highway for two years and agree to pick up trash twice a year. The Montana Department of Transportation will loan out safety vests and bags for cleanup efforts. A sign is then posted with their name on the adopted stretch of highway.

Wilson and Gerry Jennings, who is Great Falls Rising's president, said their portion of interstate proved to be more of a challenge then they had estimated. And volunteers met at the site over the Juneteenth weekend to celebrate Fields and begin their cleanup.

The 12-14 volunteers picked up about 24 bags in less than half a mile.

Jennings said once the group does an initial cleaning, any followup cleanups will be “a slam dunk.” She thinks the effort was something Mary would appreciate.

“She was a hardworking woman and we worked hard that day,” Jennings said.

Great Falls attorney Channing Hartelius was among those who helped with the cleanup, and then invited the crew to his home for lunch. He and his wife are fans of the legend.

"I think it speaks highly that we are honoring a woman who stood up for herself," he said. "She is a unique wonderful person who deserves a lot of recognition."

Hartelius said the "stagecoach" moniker is a little misleading in that Fields never drove a stagecoach, but used a wagon instead.

Frank LaLiberty of Cascade came across Fields' story as he did work on St. Peter's Mission. He said he and Hartelius are working on having a Mary Fields Day in Cascade in a year or so and getting a statue of her made.

"She's definitely a historical figure in the area," he said, adding she baby-sat a lot of children in town.

Rep. Jessica Karjala, D-Billings, came across Fields’ story while doing some family history. Karjala had a relative who had trained stagecoach horses.

She proposed dedicating nearly 14 miles of Old U.S. Highway 91 from mile marker 0 on 4th Avenue North in Cascade to mile marker 14.3 in Ulm. Members of the House Transportation Committee discussed the proposal, House Bill 662, at a March 26 meeting.

Some members were concerned the bill did not include a fiscal note. The Montana Department of Transportation put the cost at $1, noting it would make the two signs. The cost per sign was estimated at $1,998 and would be absorbed within the department’s budget.

Some committee members said at the meeting the bill did not meet the "criteria" for such an honor and would contact Karjala afterward. Karjala said Thursday that conversation never happened.

“I thought it should have been a no-brainer, which was a failed strategy,” she said.

She said Fields is not only a Montana hero, but a national hero.

It's a far cry from the 2019 session when the Legislature OK’d changes to 11 Montana roadways to honor people. Of those, one was an American Indian soldier killed at Iwo Jima in World War II, another was an American Indian female who also served in that war. One is an American Indian woman who was the first to serve in the Legislature and another is a woman who was a suffragette who became the first woman to serve in the U.S. Congress and voted against the United States entering both World Wars. Others honored included a fallen Broadwater County deputy, veterans, Native Americans and firefighters.

This came about after one lawmaker said most of the roadway bills proposed honored white men.

Then-Rep. Jade Bahr, D-Billings, said early in the session she would not support any proposals until there were some that included women or people of color. Rep. Kimberly Dudik, D-Missoula, then came up with four bills, three which involved Native Americans and one for Jeannette Rankin, a Montanan who was the first female elected to Congress.

Karjala, although a Billings resident, is a member of Great Falls Rising. She said she was happy that residents grabbed the reins of a memorial for Fields.

“Great Falls Rising took matters into their own hands and told me what they were going to do and I said 'I love it,’” Karjala said.

Wilson said she learned of Fields through Great Falls Rising and wonders why she was never taught about Fields while a student in school.

She is asked how Stagecoach Mary would react to the honor and all the hoopla.

“She’d probably mumble something under her breath, but deep down she’d be honored,” Wilson said.

Within hours of reopening June 14 after being closed eight days for a $10.8 million runway upgrade, the Helena Regional Airport was being used…

The lower end of Holter Reservoir might be closed this week to allow firefighting resources access to the water, the state announced Tuesday.

If only for a few hours, some of the old “Sabrina” magic returned to East Helena over the weekend.

The Broadwater County Sheriff’s Office issued a mandatory evacuation order Wednesday regarding the Woods Creek fire, saying that residents of …

The Woods Creek fire grew by about 3,000 acres since the last update and now stands at 18,107 acres, officials said Wednesday. 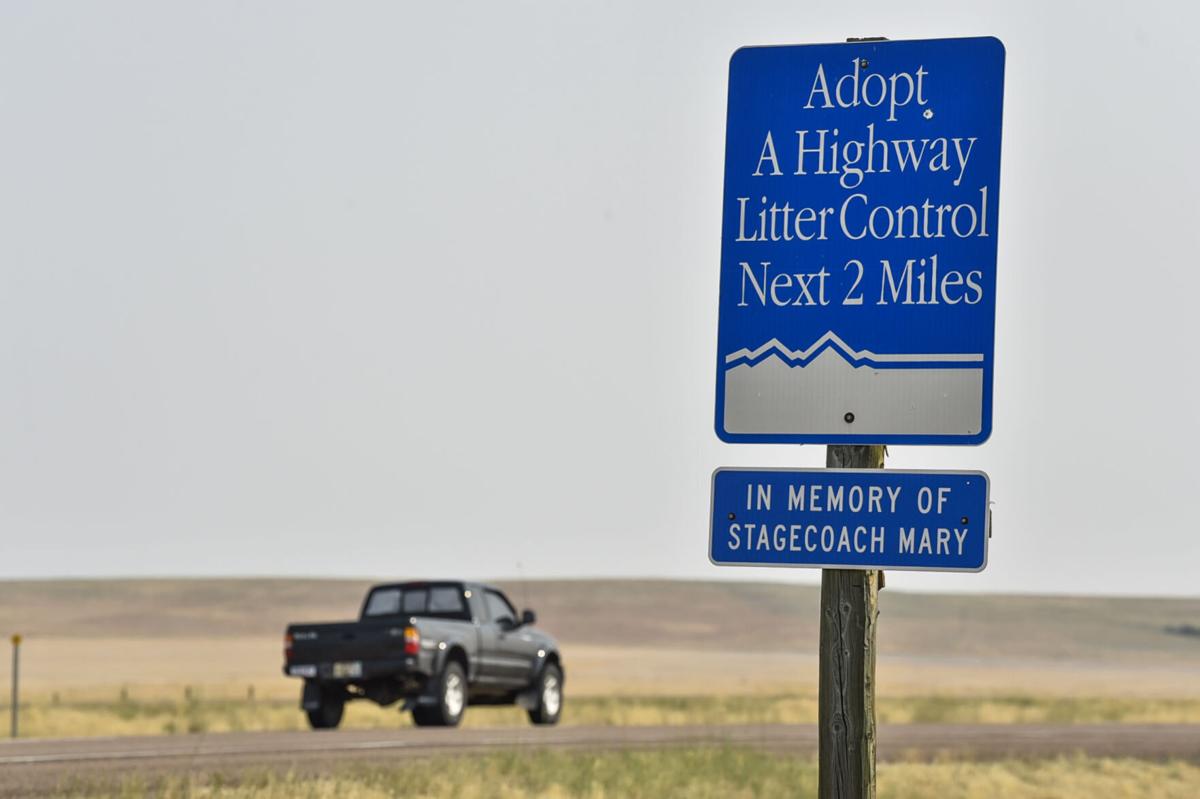 An Adopt-A-Highway sign outside Cascade honors Mary Fields, who lived in the area in the late 1800s and died in 1914. She was the first Black woman to win a U.S. Postal Service contract and the second woman to hold a postal route, according to various histories posted online. 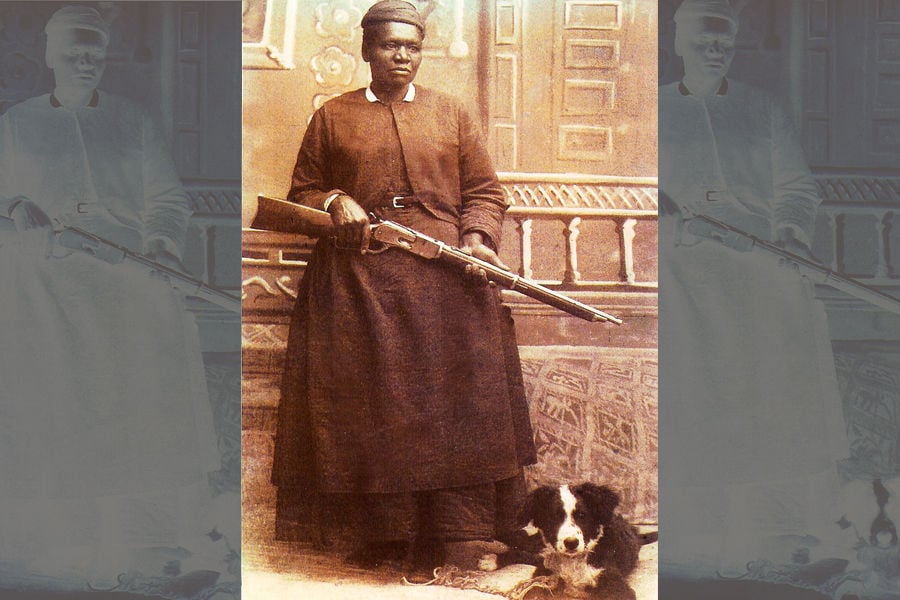 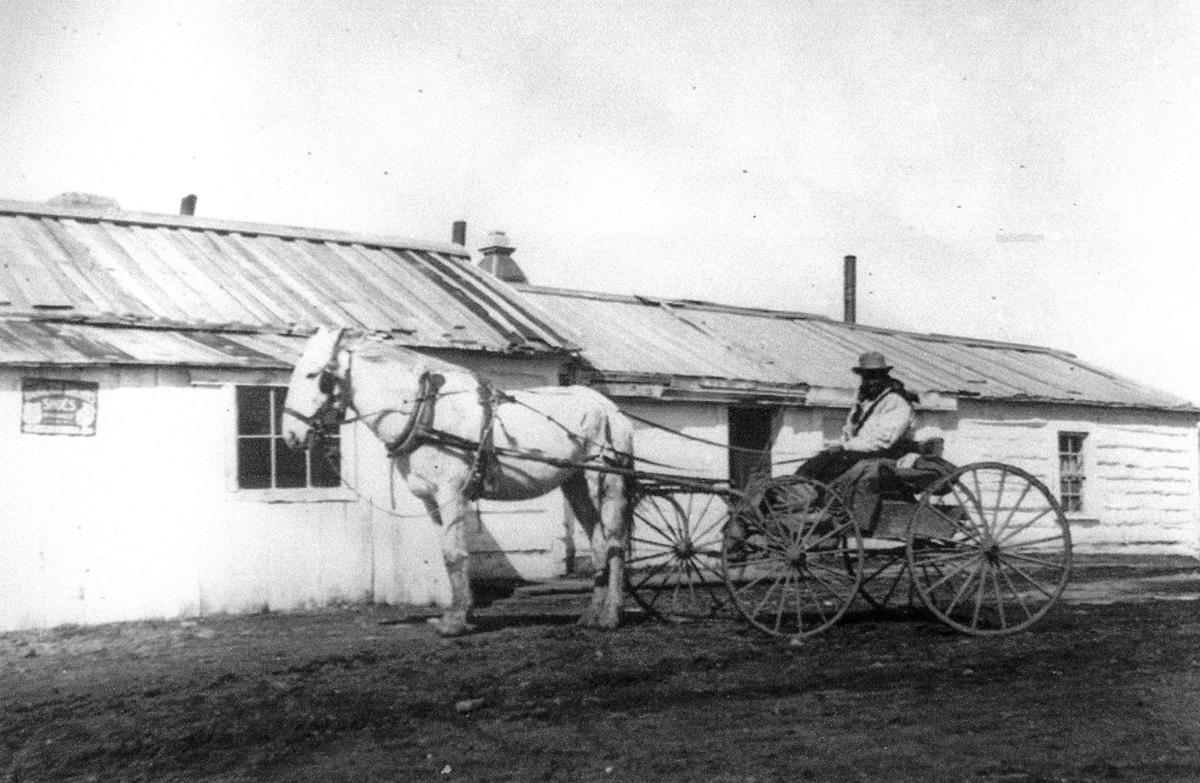 Born a slave in the 1830s, Mary Fields arrived in Montana with the Ursuline Sisters who came to establish an Indian boarding school and mission. Fields remains a legendary frontier character, celebrated for her tough persona and kind heart. 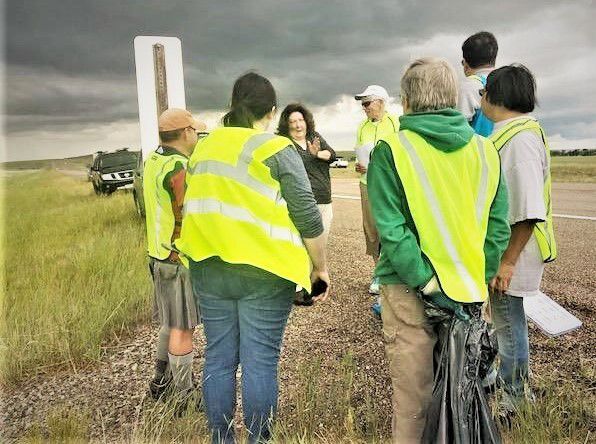 Members of Great Falls Rising huddle near the sign honoring Stagecoach Mary as they clean up the portion of highway that bears her name. 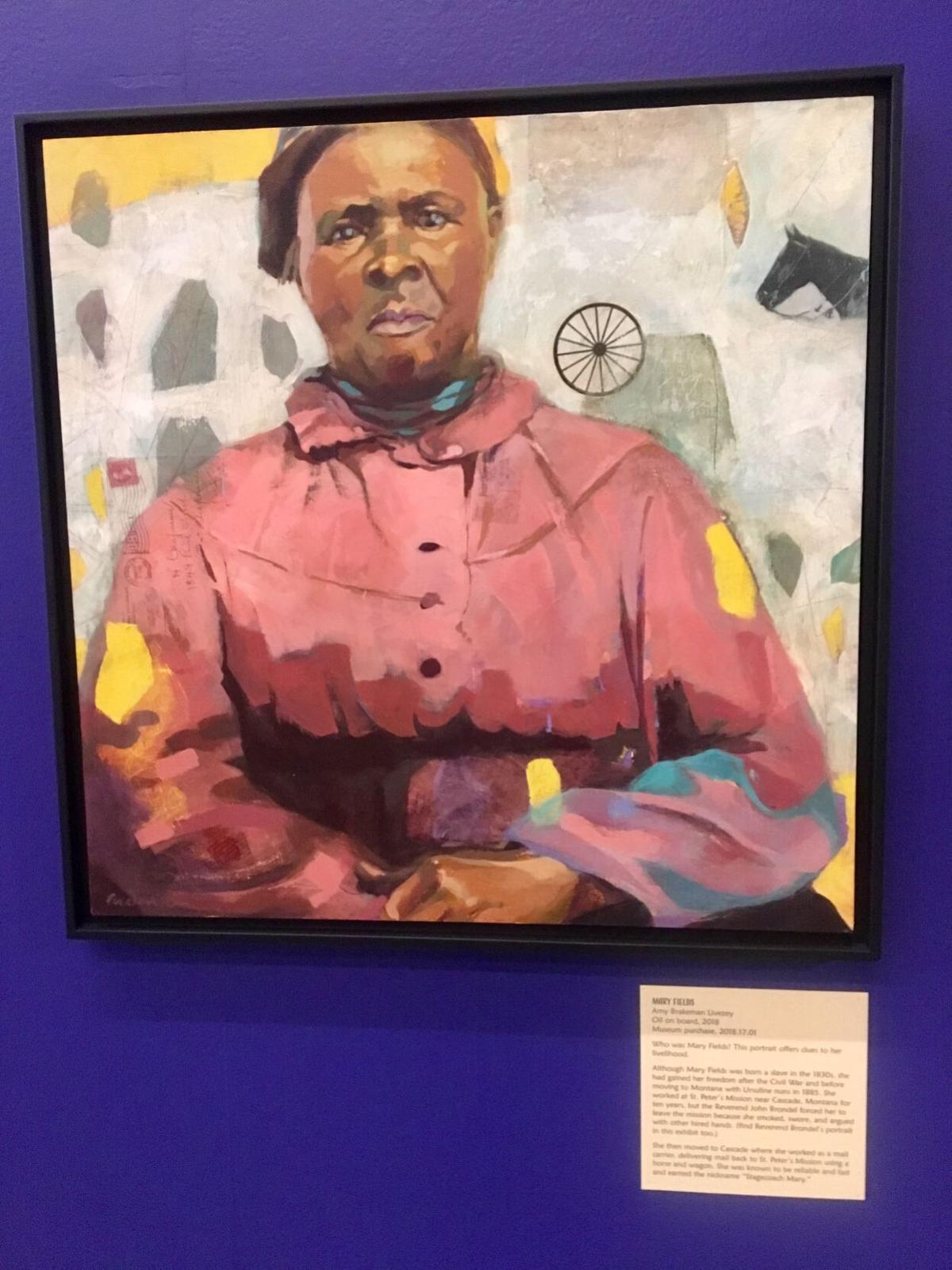 This portrait of Mary Fields is now on display at the Montana Historical Society in Helena. 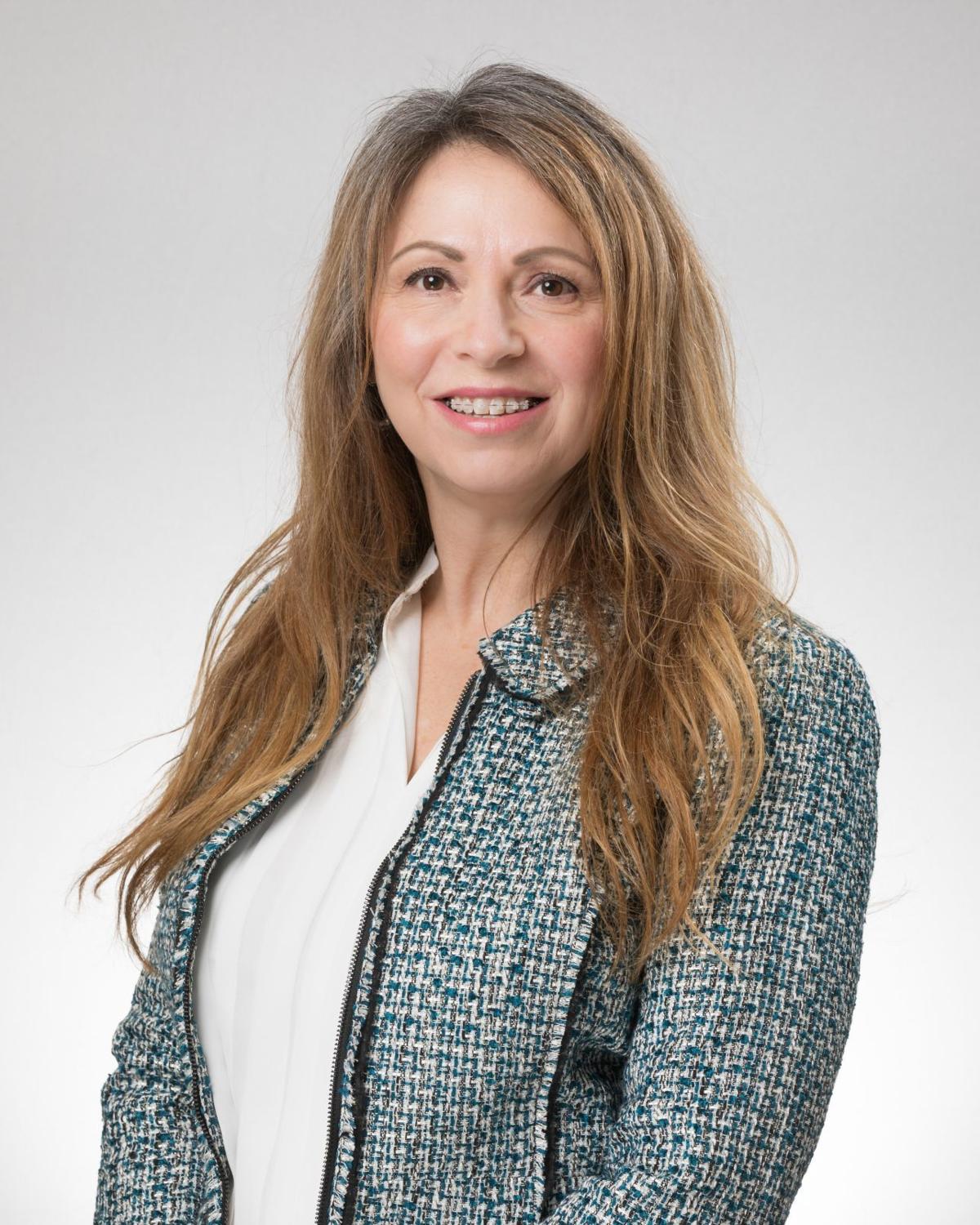