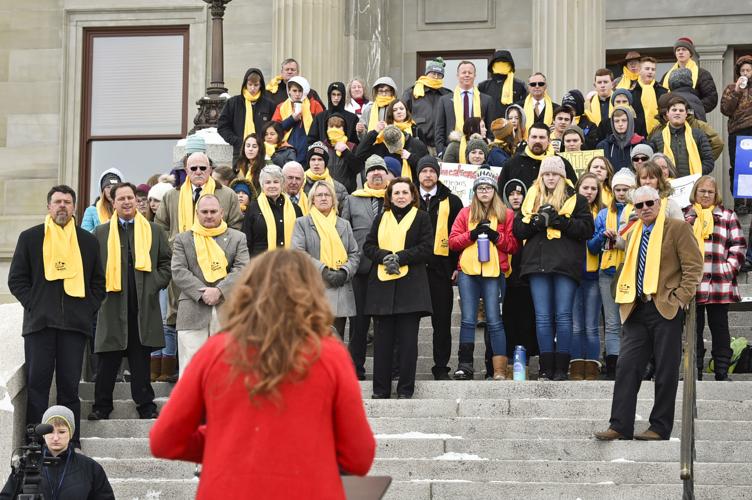 Superintendent of Public Instruction Elsie Arntzen speaks at a school choice rally on the steps of the Capitol on Thursday. 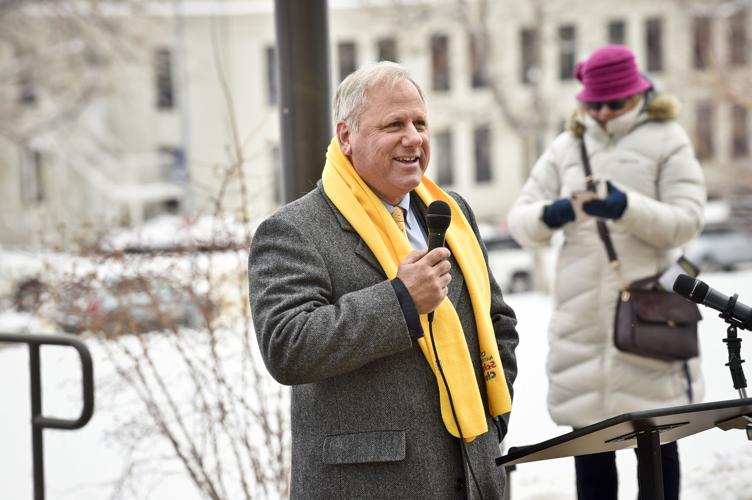 Jeff Laszloffy is president of the Montana Family Foundation, which has donated money to oppose marijuana legalization in Montana. 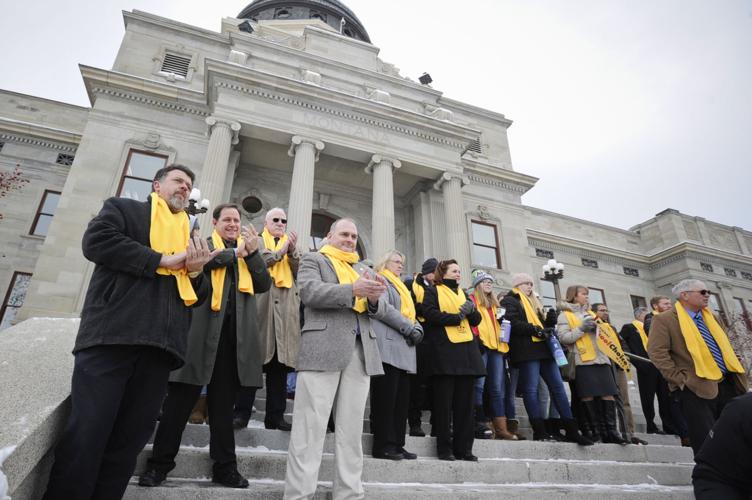 The school choice rally, hosted by Americans for Prosperity and the Montana Family Foundation, was attended by about 70 people Thursday.

“Every student learns differently” was a statement echoed by many during Thursday's National School Choice Week rally at the Montana Capitol.

The rally, hosted by Americans for Prosperity and the Montana Family Foundation, was attended by about 70 people, including Elsie Arntzen, Montana's superintendent of public instruction.

Signs carried by some of those brave enough to face the cold at the Capitol read “Greater education comes from greater choice” and “Education opportunity for all!”

Proponent Jeff Laszloffy, president of the Montana Family Foundation, said school choice is important because “every child deserves the best.”

“It’s the chance for every parent and student to find their best educational fit,” Laszloffy said. “Whether that be public, private or home-school.”

School choice advocates seek to make public funds available for private schools. This includes private, charter and home-school programs and is in addition to any tuition those schools might charge.

These public dollars could come in forms ranging from tuition tax credits to tax removals, school vouchers or other education services.

Those opposed to school choice often counter that public monies already provide a public school option to students and should not be used to fund private education.

Currently, 29 states, including the District of Columbia and Puerto Rico, have some form of school choice. Advocates feel Montana is behind the times when it comes to this issue.

Leslie Hiner, vice president of legal affairs for Edchoice, called the fight for school choice a fight for freedom.

“What better freedom is there than the freedom to learn?,” Hiner asked. She said the children of today will lead Montana tomorrow and called for expanded educational options for students.

Arntzen said the choice should be based on the students and not a political issue.

“No student learns the same way,” she said. “They all learn differently.”

Arntzen said her goal as superintendent is to offer a system in which “public and private schools work together for the benefit of students.”

Brett Simons, a representative for Republican U.S. Rep. Greg Gianforte, read a letter from the congressman in which he expressed support in ensuring that Montana families have a choice in education.

A letter from Republican U.S. Sen. Steve Daines said he has supported school choice in the past and will continue to do so in order to provide educational options for students and families.

Daines is currently the sponsor for the A Plus Act, a Senate bill that aims to free states from federal regulation when spending elementary and secondary education funds. The bill would allow states to “use such funds for any educational purpose permitted by state law, but must make certain assurances that they will use fiscal control and fund accounting procedures, abide by federal civil rights laws, advance educational opportunities for the disadvantaged and use federal funds to supplement rather than supplant state funding.”

The bill was introduced in January 2017 and the senator hopes to bring it back to Congress in the future.

There are no bills in the state Legislature regarding school choice. Herbst said this is because they would likely be vetoed by Democratic Gov. Steve Bullock.

Herbst expect more bills regarding school choice to be carried next session.

Three school board seats up for election in East Helena

Two three-year terms and a one-year term are up for election this year on the East Helena school board.

The Montana Legislature began picking up its pace in its third week. Lawmakers heard a variety of bills, including ones that would give 50-cen…

There are plenty of infrastructure priorities jockeying for scarce state dollars as the Montana Legislature meets this winter, but, with housi…

Superintendent of Public Instruction Elsie Arntzen speaks at a school choice rally on the steps of the Capitol on Thursday.

Jeff Laszloffy is president of the Montana Family Foundation, which has donated money to oppose marijuana legalization in Montana.

The school choice rally, hosted by Americans for Prosperity and the Montana Family Foundation, was attended by about 70 people Thursday.