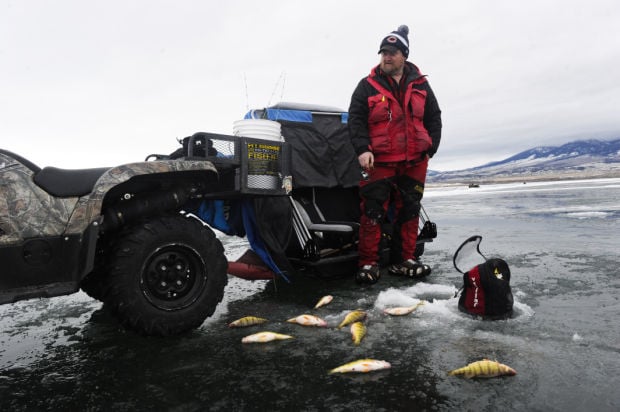 After only a couple hours

on the ice, Jason Mundel of Martin City had already accrued a hefty stringer of perch in last year’s derby. 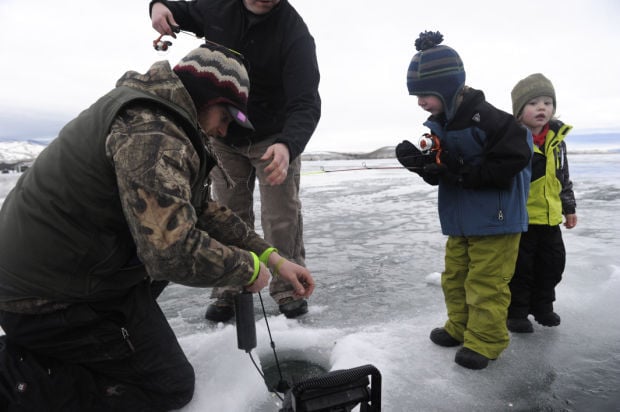 A warm day on the ice

brought anglers from far reaches of the state as well as locals onto the frozen Canyon Ferry Reservoir for the 2015 Perch Derby put on by the Broadwater Lions Club.

Hundreds of hopeful anglers will search the depths of Canyon Ferry Reservoir this weekend looking for the plumpest perch willing to hit a lure.

The annual Broadwater Lions Perch Derby kicks off Saturday with adult and under-14 categories and prizes for the largest perch and walleyes of the day. The derby continues Sunday with the three-person team event, weighing in 10 perch per team for the biggest totals. If anglers need any extra incentive, the team event will include an extra $1,000 in prize money this year, said Mike Colbert with the Lions.

“The weather can always throw our participation down, but we’re going to have good ice and I’m betting on a nice Florida day,” he said.

Historically, the derby draws about 200 adults, 30 kids and about 20 teams. Last year’s warm weekend blew history out of the water, with 335 adults, 56 kids and 51 teams.

Saturday’s individual event costs $10 for adults and $5 for kids. Sunday’s team event is $50 per team.

Anglers can sign up ahead of time at the Townsend Silos KOA any day before the derby, or starting at 5:30 a.m. on Saturday. Fishing for the individual event lasts from 7 a.m. until 2 p.m. Teams on Sunday must be at the Silos Campground by 7:30 a.m. followed by fishing from 8:30 a.m. to 1:30 p.m.

More information is available by calling the KOA at 266-3100.

Last year, Jeremy Rummel won the individual event, taking home $1,035 for his 1.23-pound perch, while winning $1,400 in the team event were Todd Mitchell of Belgrade and Matt Zeadow and Daryl Howard of Townsend weighing in 10.04 pounds of perch. The derby pays out several places for each category.

In addition to payouts, the derby offers ticket stub prizes and a Calcutta auction on Saturday at 6 p.m. at Fish Tale Tavern in Townsend.

The ice is pretty consistent throughout Canyon Ferry, with 10 to 14 inches from Pond 4 to Hole-in-the-Wall, 8 inches at White Earth, 10 inches at Confederate and 8 inches at the north end, according to the fishing report.

“The (perch) numbers are up a little bit from last year and some pretty decent weights,” said Adam Strainer, Montana Fish, Wildlife and Parks fisheries technician. “It’s a year where maybe 7, 8, 9 pounds could win (the team event).”

Perch checked this year during creel surveys averaged 10.6 inches and 0.7 pounds. A fair number of anglers have been limiting out at 10 perch, and angler numbers have been high, he said.

“We’ve been seeing a pile of folks out this year -- we talked to over 300 people last weekend,” Strainer said.

According to Strainer’s fishing report, quite a few yellow perch are being caught between Hole-in-the-Wall and Duck Creek in 40 to 55 feet of water using Hali jigs or Swedish Pimples tipped with maggots. A few walleye are also being caught while searching for yellow perch.

The National Weather Service’s weekend forecast calls for mild weather with highs in the mid-30s but a chance for snow or rain.

Where: Meet at the Townsend Silos KOA at Canyon Ferry Reservoir

Caleb Ask, 4, reels in a perch Saturday at the Lion's Club Perch Derby. With assistance from his uncle Dana Driggs, Caleb nearly landed the fi…

Canyon Ferry Reservoir played host to one of the winter’s biggest local outdoor events last weekend, with hundreds of anglers testing their sk…

After only a couple hours

on the ice, Jason Mundel of Martin City had already accrued a hefty stringer of perch in last year’s derby.

A warm day on the ice

brought anglers from far reaches of the state as well as locals onto the frozen Canyon Ferry Reservoir for the 2015 Perch Derby put on by the Broadwater Lions Club.