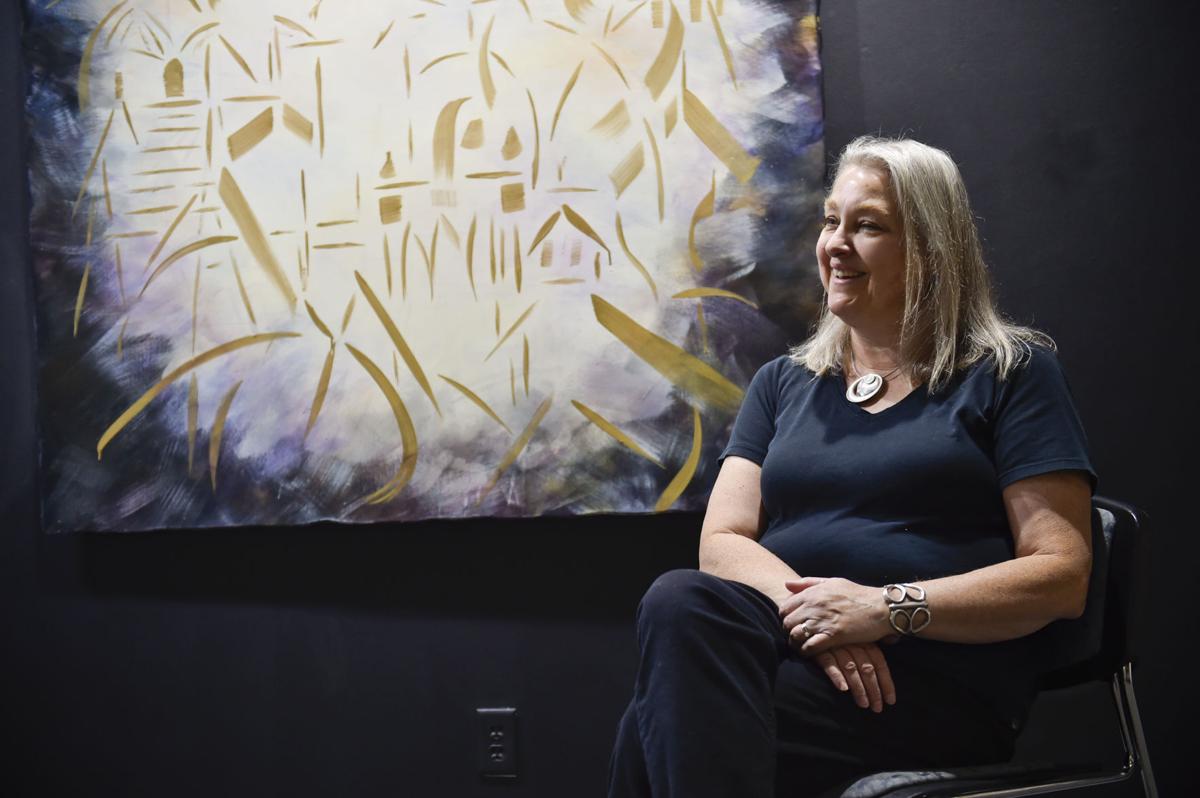 Clancy-based artist Linda McCray talks about her artwork, recently installed at the Holter Museum of Art and on display through the end of the year. 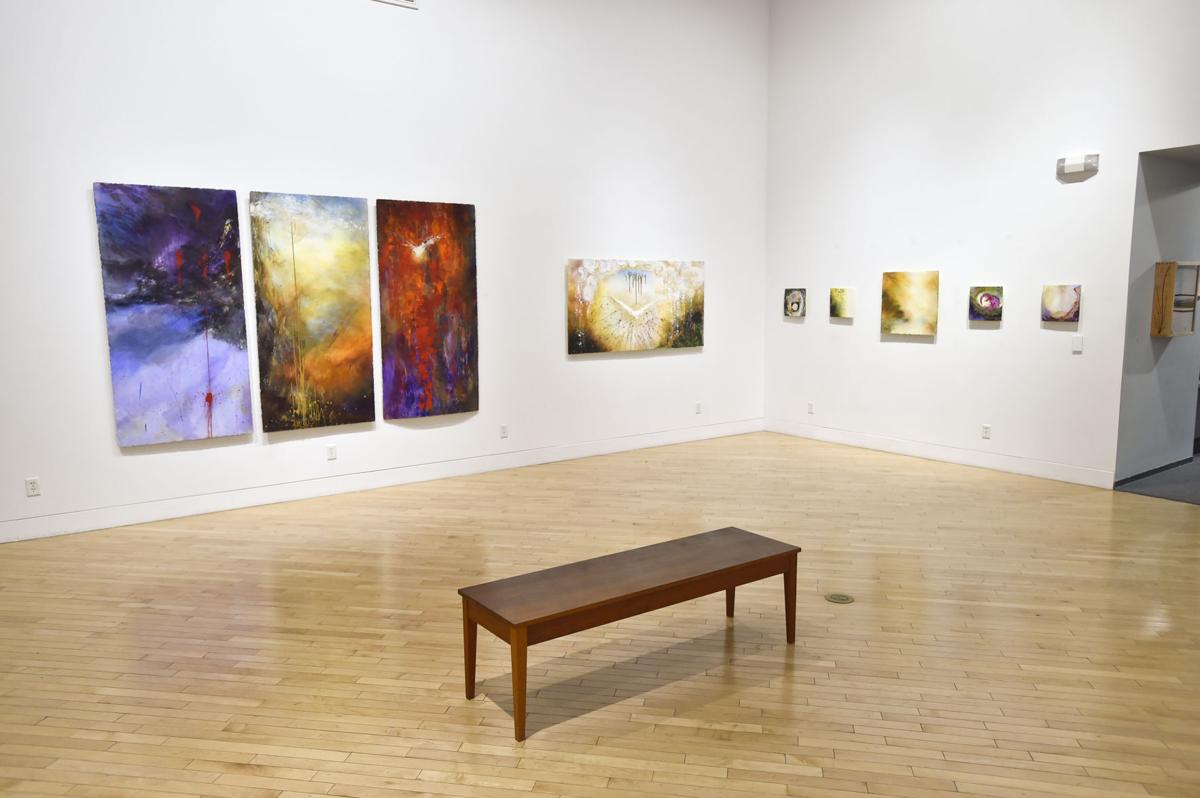 Clancy-based artist Linda McCray's artwork on display at the Holter Museum of Art. 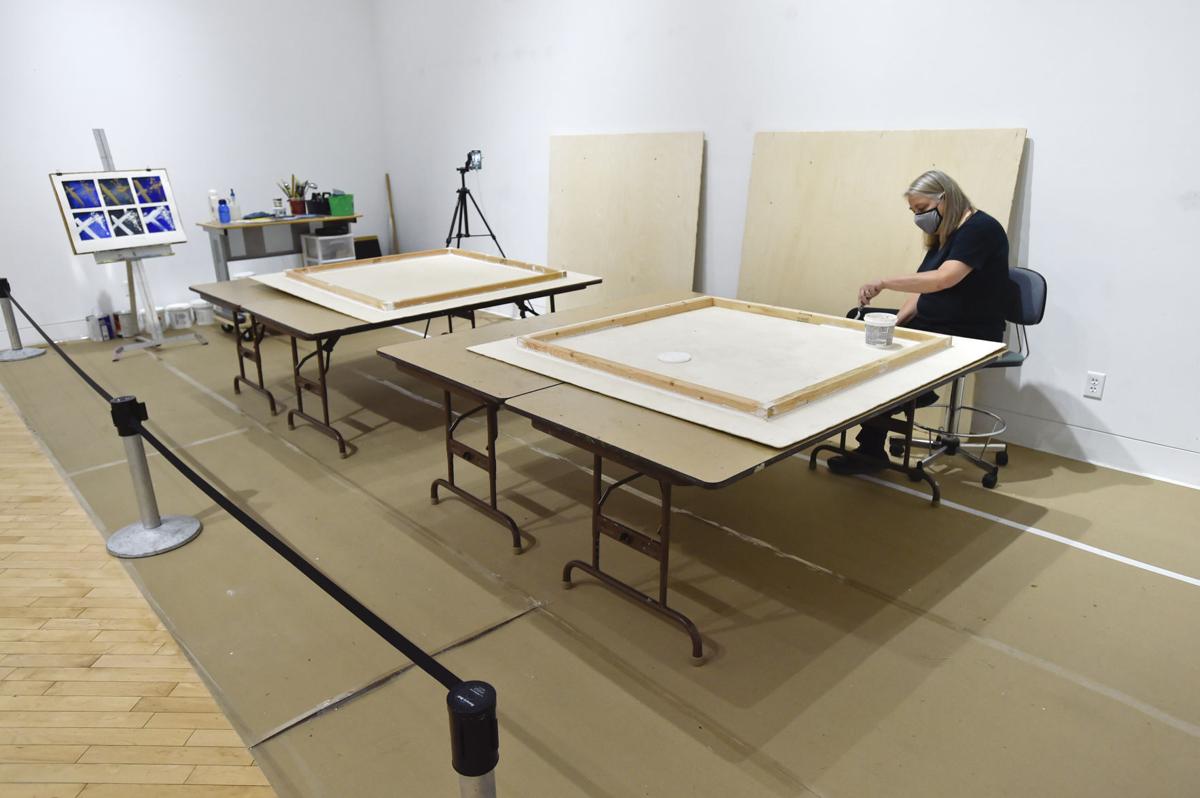 McCray works live in the High Gallery of the Holter Museum of Art on Tuesday. 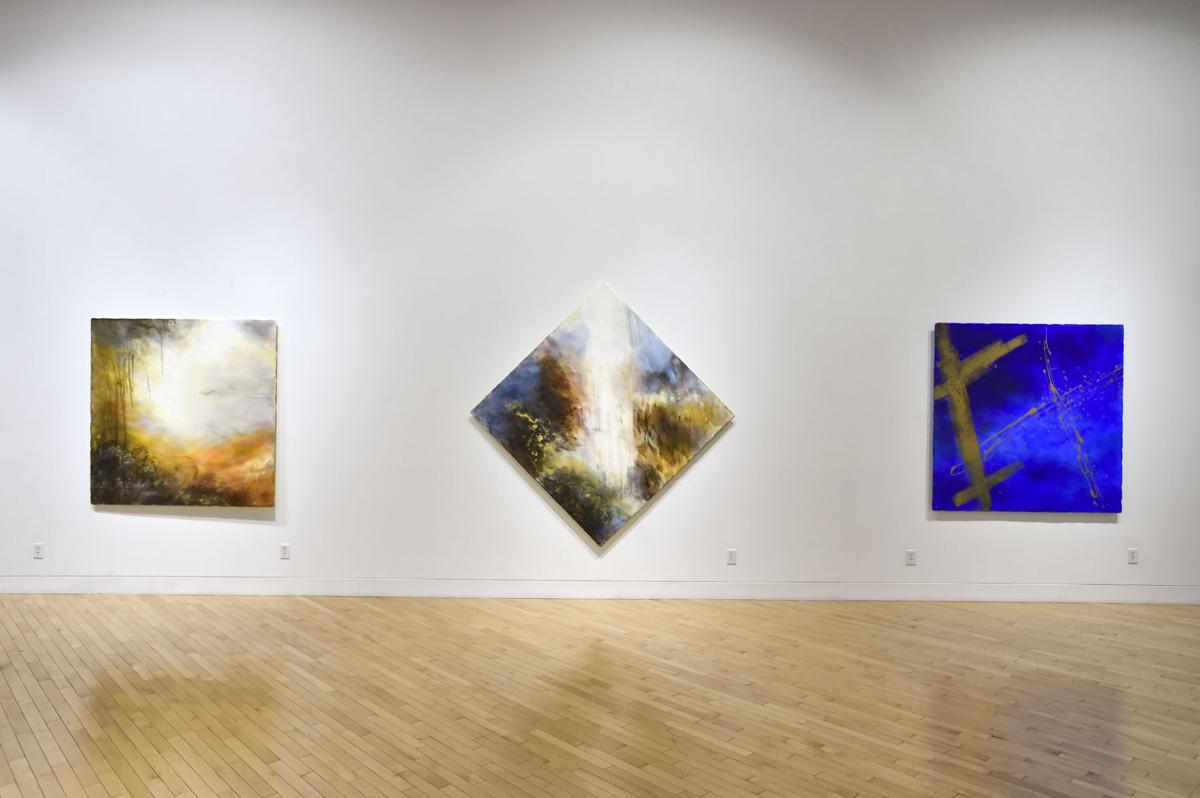 These are what painter Linda McCray makes the major foci of her works in her new exhibit, “The Spiritual in Abstract,” at the Holter Museum of Art, which opened Oct. 2 and runs through Dec. 31 in the High Gallery.

McCray was in the midst of painting a series of miniature abstract sky and landscape paintings in 2004 -- which she called her “Heaven and Earth” series, when she realized --“Oh, there’s a lot to explore here.”

It proved to be a major turning point for her art.

“My spiritual life and my art life have always been incredibly important to me,” said McCray. “It’s really no wonder they would merge.

McCray has posted a virtual artist talk on her facebook page at https://www.facebook.com/LindaMcCrayStudio.

McCray is doing a residency at the Holter from noon to 4 p.m. Tuesdays through Saturdays, Oct. 6-24. During this time, she will be creating four paintings she calls, “The Gospel Truths.”

“They will be inspired by scripture,” she said, “but taken to a universal level.”

Visitors can watch her paint and ask questions, and she will be live streaming as she works.

McCray paints with acrylics on large ¼-inch-thick birch plywood panels. Beneath the panel, she attaches a “hidden frame” that projects or floats the painting a couple inches from the wall, giving the works a more ethereal feel.

“I don’t do anything that’s not symbolic. I’m very concept-driven.

“Every one of my paintings has light because I image my creator as light.”

Even the paintings’ edges have meaning.

She intentionally roughs the edges of the paintings to make them look like torn manuscript pages that speak of history and tradition.

McCray applies her acrylic paint in many thin semi-transparent layers, using the old masters’ technique of glazing, which allows light to go in and bounce out of the painting, adding both luminosity and depth.

“Paint is made from pigment and a binder,” she explained “I use a lot more of the medium than the pigment.”

She also uses found objects -- typically sand from the River Jordan and from Montana, which she incorporates into the texture of the paint.

She also likes a lot of gold. “Frequently, through the ages, gold has been used to express divinity.”

Although McCray is a devout Roman Catholic who finds that her religion informs her works, she sees her paintings as universal abstract spiritual expressions that aren’t limited to one religion or philosophy.

“While my paintings have specific meaning to me,” she said. “I hope they ignite spiritual curiosity and invite the viewer to reflect on what is dear to their heart.”

In a gallery interview last week, she spoke of a nearby work, “Unity: Opening to One Another.” The large painting in the entry to the gallery shows a luminous white orb floating against a dark sky or universe.

Within the white sphere, quick, gold strokes depict architectural roof lines of all the major religions -- Buddhism, Islamism, Judaism as well as Christianity.

“My goal is these are symbolic of all traditions.” The broken lines are also open lines, “speaking of one people -- one huge community of life.”

“I believe the best art comes from the artist’s heart and moves to the universal,” she said. “I’m starting from my tradition. Then as I sit with it, it becomes more universal. And that’s what’s important to me -- what we have in common, rather than what we don’t.

“One of my goals is to aggiornamento sacred art,” she said. “Aggiornamento was a buzzword in Vatican II meaning to bring up to date.”

Years ago, when she first delved into spiritual painting, McCray realized it was a lonely path not taken by many contemporary artists.

She recalled the words of a friend, Sister Rita McGinnis, SCL, who observed, “There may not be a niche for you. You need to create one.”

They are words she took to heart.

What: “The Spiritual in Abstract: Paintings by Linda McCray”

The Spiritual in Abstract: How Art and Spirituality Connect, bringing together history, art and spirituality. The November time and date will be announced on her facebook page, https://www.facebook.com/LindaMcCrayStudio.

Panel members include: Hipólito Rafael Chacón, Ph.D., the Bruce and Suzanne Crocker Director of the Montana Museum of Art & Culture and Professor of Art History & Criticism in the School of Art at the University of Montana-Missoula; Reverend Edward Hislop, M,Div; MA Liturgical Studies, served as Diocese of Helena Director Office of Worship, Chair Diocese of Helena Liturgical Commission, and Chair National Federation of Diocesan Liturgical Commission; and McCray, who earned a Master of Fine Arts at UM, is a Visual Artist and a former adjunct professor of art.

Helena rallies behind physician who is out for unexplained reasons

Thousands of people are rallying behind a well-liked physician at St. Peter’s Health, who is not currently seeing patients for reasons that ar…

A man wielding a machete outside a Helena Burger King restaurant was placed into protective custody by police Tuesday afternoon.

The victim in a shooting in Ennis on Friday has been identified as 36-year-old Nicole Watson of Helena.

A 44-year-old Lincoln man died in a crash near Lincoln.

Six people were cited after a group of roughly 100 hunters fired into a herd of elk Sunday in Meagher County, Montana wildlife officials said.

Due to the rise in COVID-19 cases, attendance at nonessential events and sporting events within Lewis and Clark County will be capped at 50 pe…

Clancy-based artist Linda McCray talks about her artwork, recently installed at the Holter Museum of Art and on display through the end of the year.

Clancy-based artist Linda McCray's artwork on display at the Holter Museum of Art.

McCray works live in the High Gallery of the Holter Museum of Art on Tuesday.