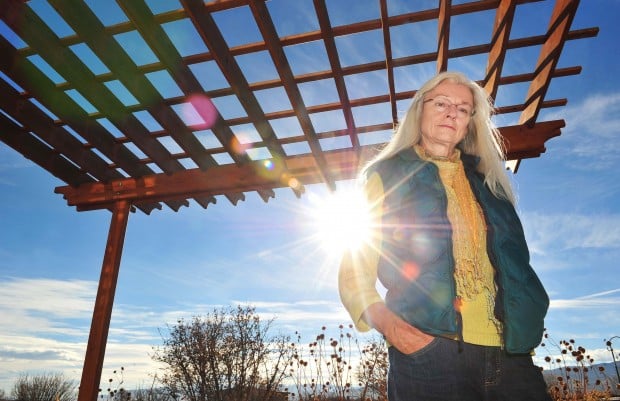 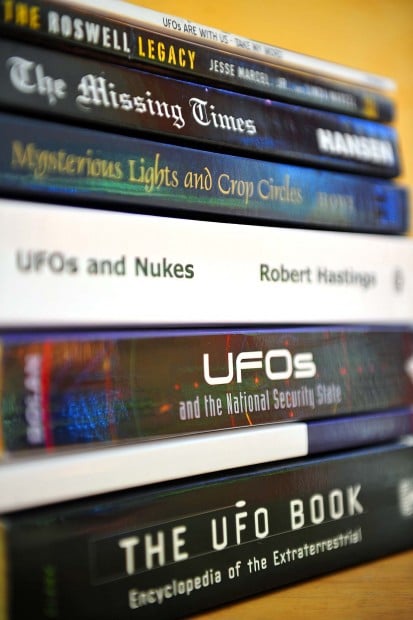 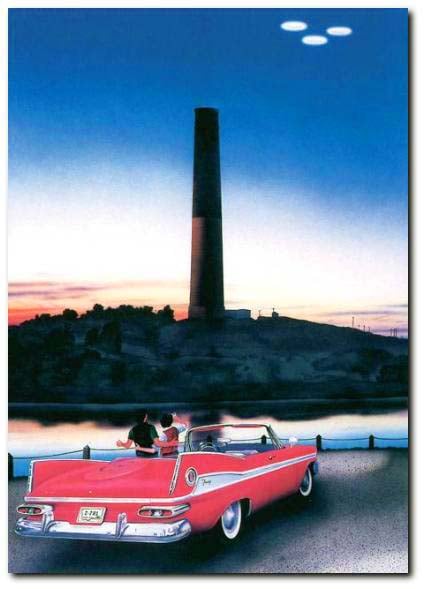 ‘Saucers Over the Big Stack’: Missoula artist Monte Dolack imagined the 1950 Great Falls incident this way, in his 1985 color painting that includes a bright red 1959 Plymouth Fury. In Nick Mariana’s UFO film there were actually two discs, not three, and they hovered to the left of the ‘stack.’ This artwork used in Bird’s ‘Montana UFOs and Extraterrestrials,’ and was used with permission of the artist, www.dolack.com. 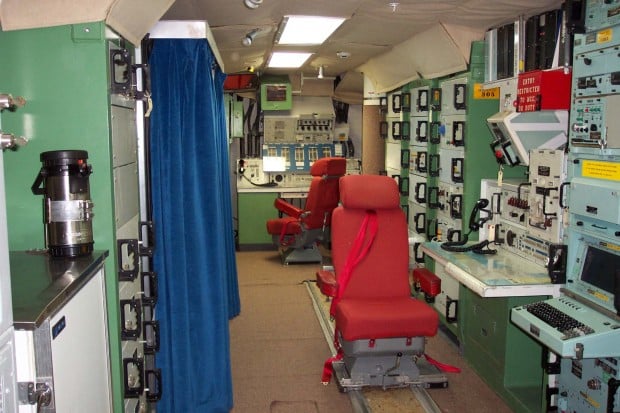 Two Air Force missile officers spent long shifts below ground in this chamber, called a launch capsule. To launch a ten-missile group, or ‘flight,’ of Minuteman missiles, their two separate keys would need to turn simultaneously in switches at the two well-separated consoles. Lt. Robert Salas was on duty at his launch console on March 24, 1967, when all 10 missiles in his Oscar Flight were shut down by a UFO. (Photo from the Minuteman Missile National Historic Site/National Park Service)

Joan Bird has always been interested in the big questions: Who are we? Why are we here?

She uses a combination of science and spirituality to search for answers. In the introduction to her new book, she writes: “So I have a critical mind with a great respect for knowledge and scientific method. And I am comfortable with the fact that there are some things that science just can’t explain, at least not yet. Perhaps that is why I have always had an interest in those pieces of information that don’t quite fit into the dominant worldview.”

Bird has a Ph.D. in zoology and she’s a longtime member of the Institute of Noetic Sciences. She’s worked as a conservation biologist for the Montana Environmental Information Center, The Nature Conservancy and Montana Department of Fish, Wildlife and Parks.

So, for those who don’t know Bird, the title of her new book might come as a bit of a surprise, “Montana UFOs and Extraterrestrials: Extraordinary Stories of Documented Sightings and Encounters.”

In the book, Bird tackles another big question: Are we alone?

And she does so quite convincingly. For those who are somewhat skeptical about life beyond Earth, Bird presents some credible evidence and fascinating stories. For those who already believe in ETs and UFOs, the book might provide comfort.

“When I signed up Joan to do the book, I was not a believer,” said Chris Cauble, publisher at Riverbend Publishing in Helena. “But I have to admit her information is compelling.”

“Montana UFOs” begins with the film Nick Mariana took in 1950 of two spinning discs in the sky above Great Falls. Mariana was the general manager of the Great Falls Electrics, a minor league baseball team, and was walking into the grandstand at Legion Ballpark when he noticed the flying objects. Mariana was a graduate of the University of Montana’s journalism school and kept a movie camera in the glove compartment of his car. He grabbed the camera and captured at least 15 seconds of the disks as they hovered and then flew in unison past the Anaconda Company smokestack.

The Great Falls Tribune ran a front-page story about Mariana’s film. The film drew the interest of the U.S. Air Force, who asked to borrow the film. When the film was returned to Mariana, part of it was missing. According to Bird’s research, this was just one example of a continuing effort of government agencies to suppress and debunk information about the existence of UFOs.

The second chapter discusses a series of events involving the presence of UFOs near Minuteman missile sites in Montana in the 1960s. Several missile launch officers witnessed bright objects hovering nearby as the nuclear missiles they were in charge of were mysteriously deactivated.

Bird writes: “The events in this chapter seeded my first thought of the need for this book. The extensive documentation of UFO activity around nuclear missile sites — and the convincing evidence that UFOs have deactivated nuclear missiles — is something people need to know. It belongs in our Montana history texts, in our American history texts, and in our world history texts. It is that significant, and it is critical to our collective future.”

Bird’s interest in unexplainable phenomena began after her mother had a near-death experience after heart surgery.

“When she told me about it, I found it fascinating,” Bird said. Her mother told Bird about seeing her own mother, who had died six months earlier, and a feeling of being “surrounded in love.”

After the near-death experience, Bird said her mother became telepathic. She could hear her mother call Bird’s name when she was in distress. When Bird was in college, boxes of pens would show up in care packages from her mother when she needed them most.

“I became interested in things that are not easy to explain,” Bird said.

But she didn’t believe in UFOs until several years later when she was asked to write an article on crop circles. During her research, Bird read a book by Linda Molten Howe, an ufologist and expert on crop circles. Bird learned that while many crop circles are manmade, there are some that are made through electromagnetic forces.

“It was shocking,” she said. It was also a challenge for the scientific part of her mind to accept. But the evidence was there, she said.

“After my science mind accepted it, I wanted to find people I could talk to,” Bird said.

Those people were hard to find, but not impossible.

“When I would bring it up, people would change the subject,” she said. “But others would be interested. About a third of the time, they would tell me about an experience they or a close friend has had.”

“Most people there are not skeptics,” Bird said.

A self-proclaimed UFO activist, Bird was approached by Cauble to write a book about Montana UFOs about five years ago.

Bird signed the book contract and dived into her research.

“I wanted to create a book that would be a good introduction to the subject,” Bird said.

And, she has succeeded in that. “Montana UFOs” places the Montana sightings and contacts into a larger context of national and world events. She also delves deeply into government cover-ups.

“I think the time is better for a UFO book now than a decade ago,” Cauble said. “In the ’50s and ’60s, the military was ridiculing those reports, and during that time period, we were more inclined to believe the government. I think that has changed. There have been so many deceptions from the government that we now know about, maybe the government has lied about UFOs, too.”

Another question Bird is pondering now is one once asked by Albert Einstein: Is the universe friendly?

In the final two chapters of “Montana UFOs,” Bird writes about the experiences of Leo Dworshak and Udo Wartena. Dworshak, who died in Helena in 2007, had visits with friendly extraterrestrials several times throughout his life. Wartena was invited by courteous ETs to tour a spaceship in the Diamond City area, about 30 miles east of Helena, where he was prospecting for gold.

“They seemed to have something about them that other people we had met before didn’t have … perhaps it is the other way around … I am certain that hatred and violence are not a part of their behavior; it does not seem to exist with them,” Dworshak wrote in his own book, “UFOs Are With Us: Take My Word.”

But it’s the reports of UFOs deactivating nuclear missiles that gives Bird the clearest answer to the question.

“We have allies that want us to make it, but don’t want to step on our free will,” Bird said. “If they have the ability to deactivate the most powerful weapons on Earth, then potentially they have our best interest at heart. I’d like to believe that.”

Joan Bird will be signing copies of her book, “Montana UFOs and Extraterrestrials: Extraordinary Stories of Documented Sighting and Encounters,” on Saturday at the Montana Book and Toy Company from 1 to 3 p.m.

The book is available at Montana Book and Toy Company, Hastings and the Montana Historical Society Museum store.

A 30-year-old Helena woman has been accused of assaulting a child and meth possession.

The Lewis and Clark County motor vehicle department is expanding staff and offices, while the state plans to replace its computer system for r…

‘Saucers Over the Big Stack’: Missoula artist Monte Dolack imagined the 1950 Great Falls incident this way, in his 1985 color painting that includes a bright red 1959 Plymouth Fury. In Nick Mariana’s UFO film there were actually two discs, not three, and they hovered to the left of the ‘stack.’ This artwork used in Bird’s ‘Montana UFOs and Extraterrestrials,’ and was used with permission of the artist, www.dolack.com.

Two Air Force missile officers spent long shifts below ground in this chamber, called a launch capsule. To launch a ten-missile group, or ‘flight,’ of Minuteman missiles, their two separate keys would need to turn simultaneously in switches at the two well-separated consoles. Lt. Robert Salas was on duty at his launch console on March 24, 1967, when all 10 missiles in his Oscar Flight were shut down by a UFO. (Photo from the Minuteman Missile National Historic Site/National Park Service)