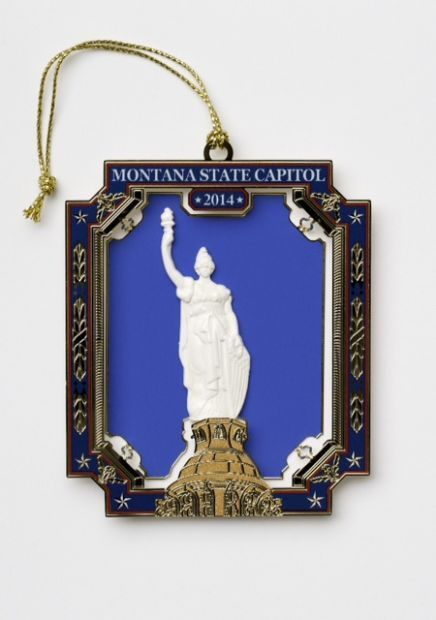 This year's edition of the Montana Capitol Restoration Foundation's Christmas tree ornament is available for sale at the Montana Historical Society. 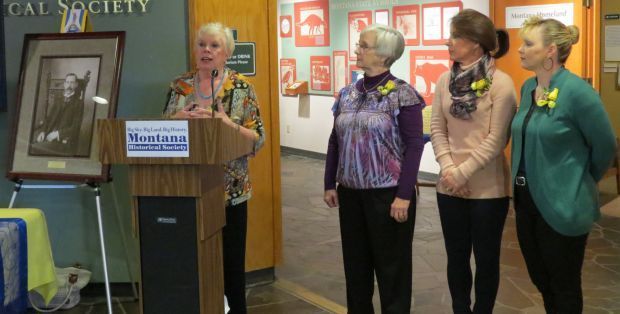 Norma Jean Kelly, president of the Foundation of the Montana Capitol Restoration Board, speaks at a ceremony honoring the family of the sculptor Edward J. Van Landeghem, whose sculpture 'Montana' sits atop the Capitol dome. Kelly presented Van Landeghem’s granddaughter, Alice Nagle, and great-granddaughters, Susan Williams and Diane Levin, with commemorative ornaments depicting the sculpture, which the foundation sells as a fundraiser for Capitol projects. Van Landeghem’s identity as the sculptor remained a mystery for over a century after records were destroyed, until Nagle discovered a newspaper article in her late grandfather’s belongings.

The Montana Capitol Restoration Foundation in cooperation with the Montana Historical Society released its ninth annual Christmas ornament, this year displaying “Montana," the statue that sits atop the Capitol dome, and highlighting the artist who created her yet remained cloaked in mystery for more than a century.

In 1997, Alice Nagle of Hatfield, Pennsylvania, and her siblings were sorting through the belongings of their late grandfather, Edward J. Van Landeghem of Philadelphia. They knew he was a sculptor, but a newspaper discovered in a trunk revealed that one of Van Landeghem’s works sat atop the Capitol in Helena, all the way across the country. Thinking that her grandfather’s identity as the sculptor was surely common knowledge, the siblings only thought of the discovery as a great family history.

“We knew for years but didn’t think anything of it other than we should go visit it someday,” Nagle said. “Then I got on the Internet to do some research and discovered she had the wrong name.”

On Saturday, Nagle and her daughter’s received their own ornaments in a ceremony at the Montana Historical Society. The ornament includes Van Landeghem’s name etched on the back.

The foundation releases the annual ornament as a fundraiser for restoration and improvement projects at the Capitol. This year, proceeds helped pay for installation of new brass hand rails that lead up three flights of the Capitol’s steps.

Although the state of Montana identified the 17-foot-tall sculpture of a woman holding a torch high above her head and a shield at her side as “Lady Liberty,” her grandfather had named the statue “Montana,” she said. That led to an email to the Montana Historical Society.

“I get a lot of credit for discovering the sculptor when all I did was open an email,” joked art curator Kirby Lambert, who explained how the identity had been lost in the first place.

The first Capitol Commission, which oversaw the construction beginning in 1895, attempted to embezzle almost half of the $1 million allotted for the building, Lambert said. They were exposed by whistleblower Fred Whiteside, and the commission was disbanded, but not before destroying numerous records. No criminal charges ever came, he said.

As a new commission formed, a sculpture arrived on the train with no information on its purpose.

“They looked at her and said, ‘She must clearly be for the Capitol,' but they knew nothing about her,” Lambert said.

State officials mounted the sculpture atop the dome, and the mystery remained for more than 100 years despite historians’ best efforts.

“Then I got that email asking, ‘Is my grandfather’s statue still on top of your building?’” Lambert said.

Documentation followed, and Van Landeghem was verified as the sculptor. In a 2006 ceremony, the statue was officially dedicated under her original name of “Montana."

The image of a strong woman looking over Helena and the state of Montana is fitting considering the state’s history, said Norma Jean Kelly, president of the foundation board.

“Just look how strong she is with how much women in Montana have accomplished,” she said.

Montana women got the vote six years before the rest of the country and elected Rep. Jeanette Rankin, who displayed courage by voting against both World Wars, Kelly said. That continues today, with eight women leading state agencies, she said.

“(Montana statue) foretold how women would strengthen the state and the nation,” Kelly said.

Van Landeghem was a professional sculptor, born in Belgium in 1865, who attended the Academy of Fine Arts School in Brussels, Nagle said. She believes her grandfather traveled back and forth to the United States looking for work, then married his wife Elodie, and they moved permanently to Philadelphia.

As the family has continued to research, more and more of Van Landeghem’s work has been identified in some of America’s most historic places. His work includes a plaque at Valley Forge, a George Washington sculpture at the Masonic Hall in Lansdale, Pennsylvania, and a plaque depicting President Franklin Delano Roosevelt. That sculpture includes a thank-you letter from FDR, Nagle said, and hangs in a museum in Warm Springs, Georgia.

Her brother had done much of the research on the FDR piece, Nagle said. Other pieces hang in Philadelphia City Hall the Library of Congress, she said.

The family has several of her grandfather’s pieces, as Van Landeghem was a proficient artist, Nagle said. But he never spoke of just how many pieces adorned historic places, she added.

Because her father did not want to follow in his father’s footsteps, little was ever discussed in the family about her grandfather’s immense body of work, she said.

“We simply didn’t know he was so famous,” Nagle said. “If there’s one thing I always tell my kids it’s, don’t ever not tell your kids what’s going on in your life.”

As its final act before disbanding, an organization that helps fund restoration projects at the Montana State Capitol building presented its a…

This year's edition of the Montana Capitol Restoration Foundation's Christmas tree ornament is available for sale at the Montana Historical Society.

Norma Jean Kelly, president of the Foundation of the Montana Capitol Restoration Board, speaks at a ceremony honoring the family of the sculptor Edward J. Van Landeghem, whose sculpture 'Montana' sits atop the Capitol dome. Kelly presented Van Landeghem’s granddaughter, Alice Nagle, and great-granddaughters, Susan Williams and Diane Levin, with commemorative ornaments depicting the sculpture, which the foundation sells as a fundraiser for Capitol projects. Van Landeghem’s identity as the sculptor remained a mystery for over a century after records were destroyed, until Nagle discovered a newspaper article in her late grandfather’s belongings.