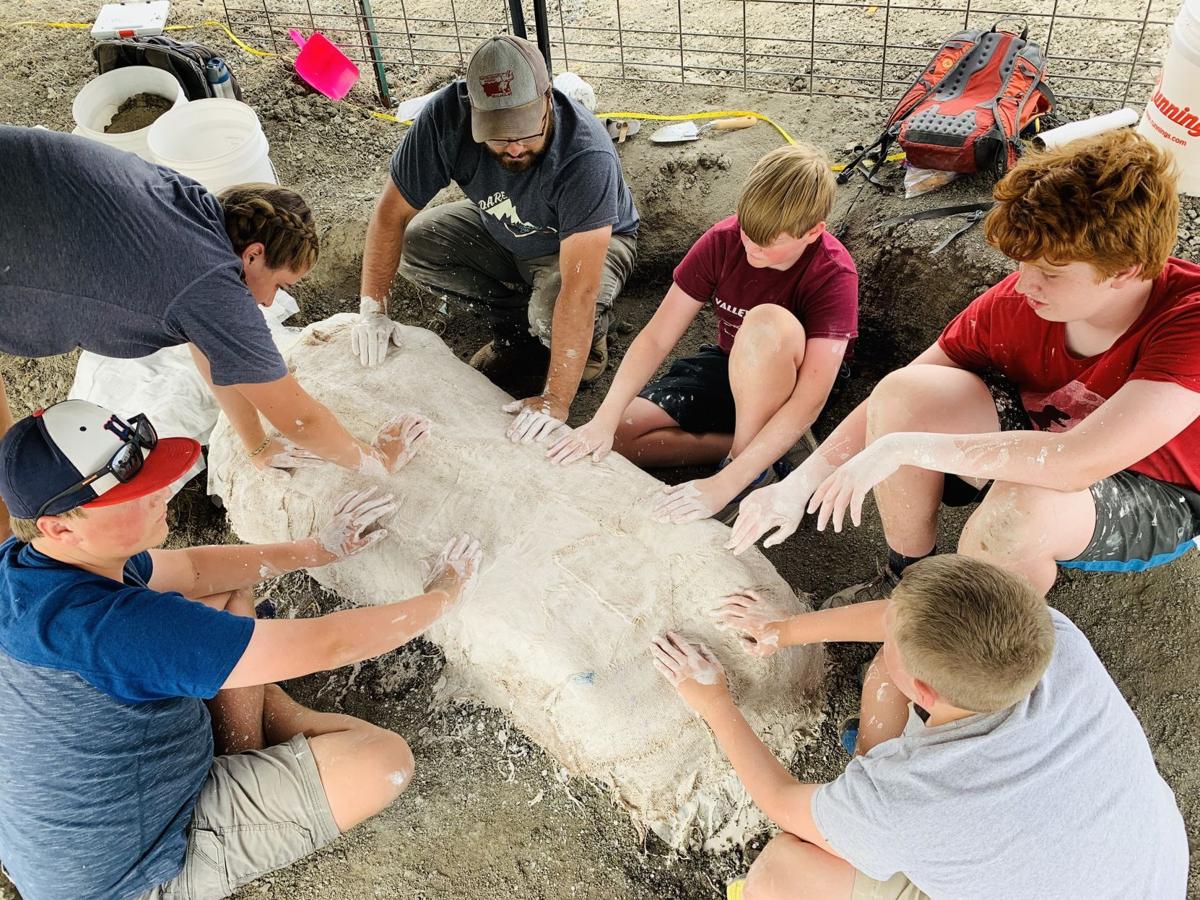 Campers jacket a 4-foot section of the mosasaur tail in plaster and burlap for transport. 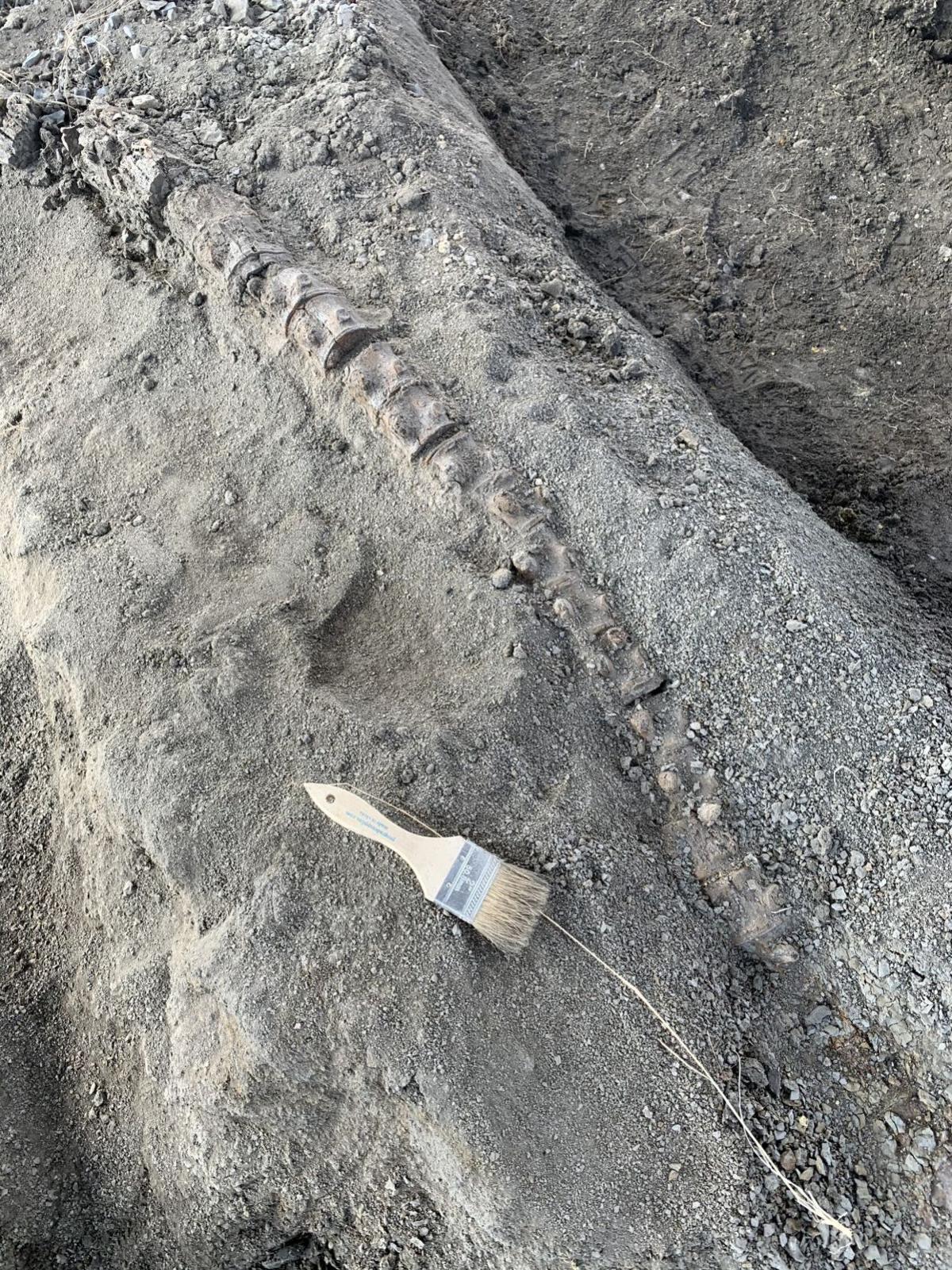 Campers worked to uncover this large section of a mosasaur’s tail found in eastern Montana, as well as other portions of the estimated 45-foot to 50-foot marine reptile. 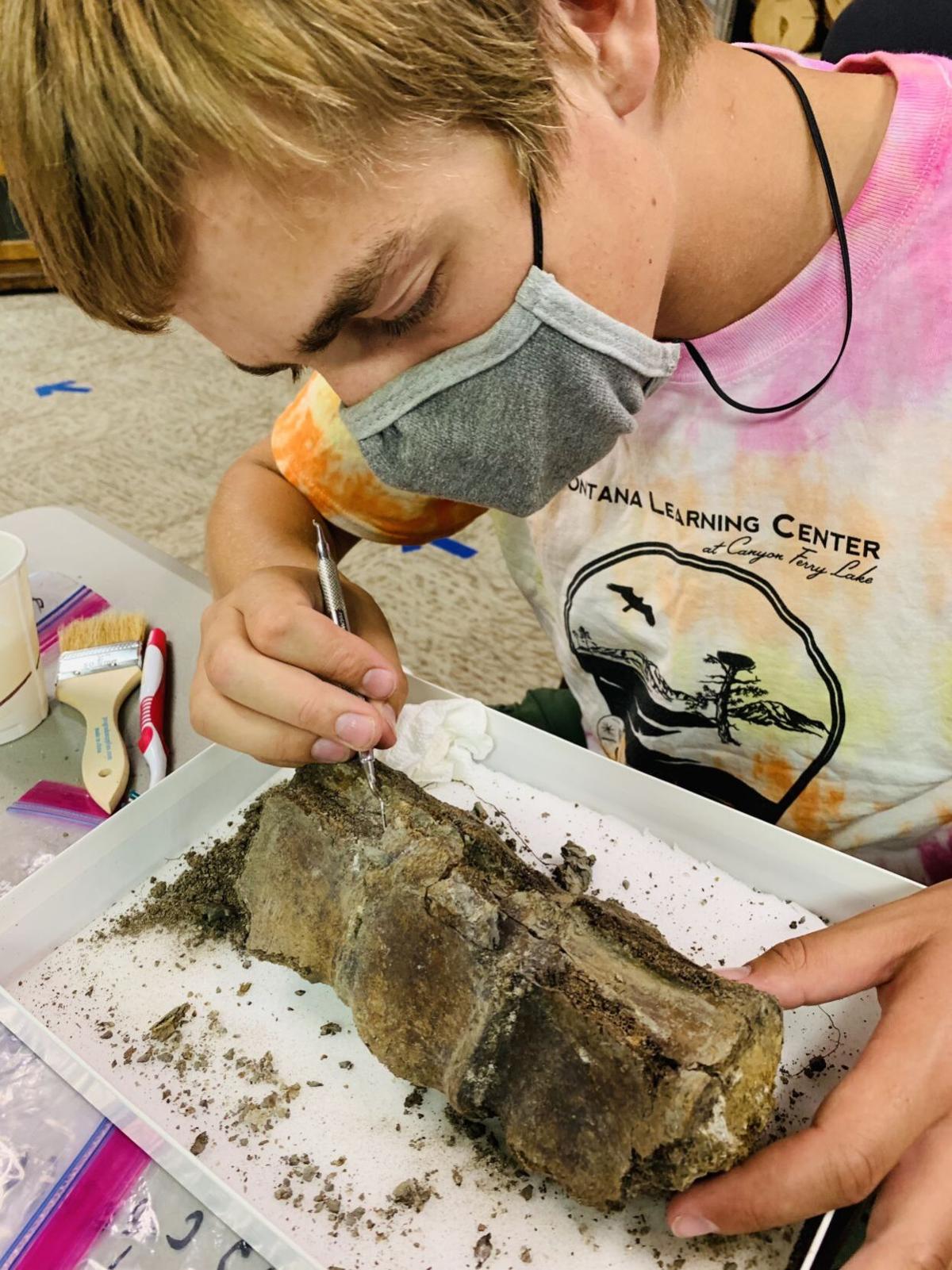 Montana Learning Center Junior Counselor Heath Caldwell cleans and prepares a section of a mosasaur‘s vertebrae for display at the Carter County Museum in Ekalaka.

Over the summer, campers from the Montana Learning Center near Helena and the Carter County Museum partnered to excavate a mosasaur found in eastern Montana.

According to Ryan Hannahoe, executive director of the MLC, it was an unforgettable learning experience for the eighth to 12th grade students who participated. The students got to do the same work that professional paleontologists get to do every day.

Campers spent two and a half days at the active dig site near the Pierre Shale Formation in eastern Montana. They were excavating the tail end of a mosasaur, a 75-million-year-old predatory marine reptile of the late Cretaceous period. Mosasaur could average between 30 and 50 feet in length.

This particular specimen is known as "Vickie" and has 70 articulated vertebrae spanning 28 feet. Additionally, multiple pelvic and flipper bones have been uncovered.

Hannahoe said Vickie was discovered by MLC junior staffer Heath Caldwell and his father Rod. The two were prospecting when they discovered the skeleton, which is now named for Heath's mother.

"Heath was one of my former students when I taught middle school science," Hannahoe said. "Same for being a former camper of the MLC, and he is now an MLC staff member. Heath is now a senior at Helena High School."

So far, Vickie has proved to be quite the specimen. Hannahoe reported that it appears to be a near complete skeleton, based off what has been found so far. This is an incredibly rare find. However, work continues to fully excavate the 75-million-year-old animal. This is a process that could take anywhere from several weeks to several years to complete.

"Like all the camps offered by the MLC, Camp Clades & Spades not only expands students' scientific knowledge through hands-on experiences, it also teaches students how to work together as a team how to think creatively, while making new friends and having fun while learning," Hannahoe said.

One day when the excavation is complete, Vickie will most likely be housed in the Carter County Museum in Ekalaka, said Hannahoe. MLC currently has a small exhibit there with several fossils found by campers.

"The Montana Learning Center is well known across Montana for offering unforgettable learning opportunities for students and teachers alike," Hannahoe said. "We are thrilled to partner with the Carter County Museum in Ekalaka to offer Montana kids an opportunity to participate in, and contribute meaningfully to, an ongoing dig."

An employee and a third student at an elementary school in East Helena tested positive for COVID-19, according to public health report release…

Area veterans gathered at Memorial Park in Helena Friday morning to honor and remember service members missing in action and prisoners of war.

The two candidates vying for a Montana U.S. Senate seat that's considered pivotal in determining if Democrats can wrest the majority from Republicans come November are set to face off in a Monday night debate.

Helena Public Schools is reporting four new cases of COVID-19, bringing the total number of cases in the past 14-days to seven.

Campers jacket a 4-foot section of the mosasaur tail in plaster and burlap for transport.

Campers worked to uncover this large section of a mosasaur’s tail found in eastern Montana, as well as other portions of the estimated 45-foot to 50-foot marine reptile.

Montana Learning Center Junior Counselor Heath Caldwell cleans and prepares a section of a mosasaur‘s vertebrae for display at the Carter County Museum in Ekalaka.