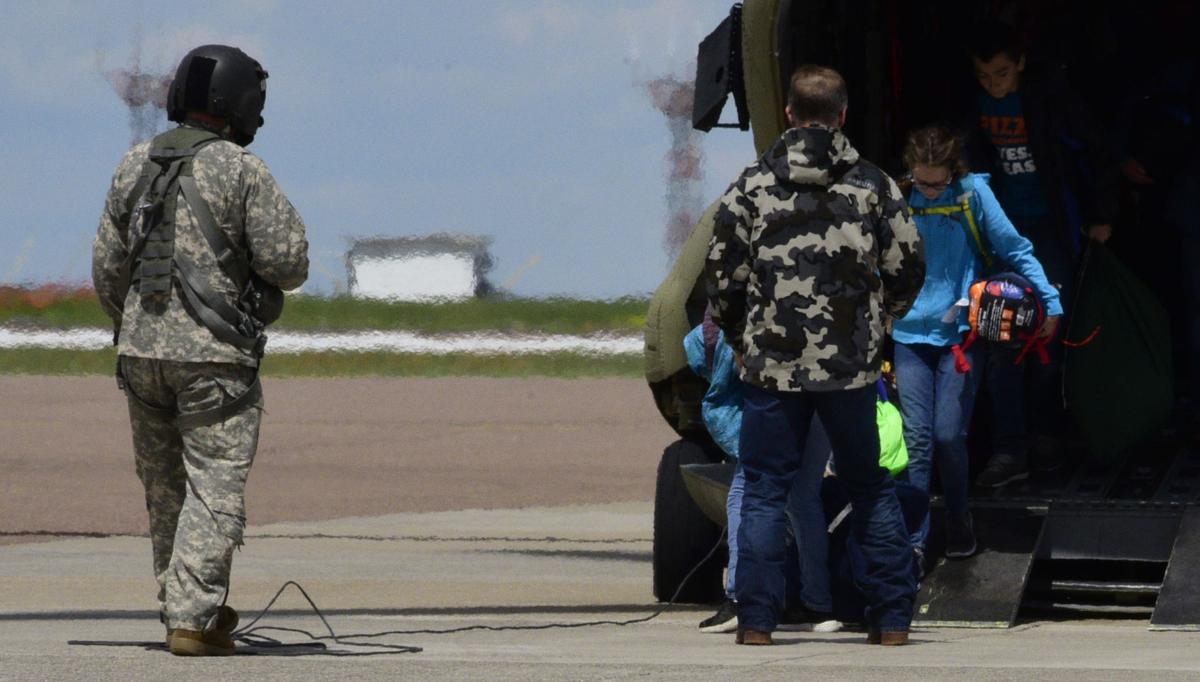 Using two Chinook helicopters, the Montana Army National Guard evacuated 137 students and staff from the Montana Wilderness School of the Bible south of Augusta. The school became cut off after the nearby Dearborn River flooded and washed out the roads. Evacuees were transported to Great Falls. 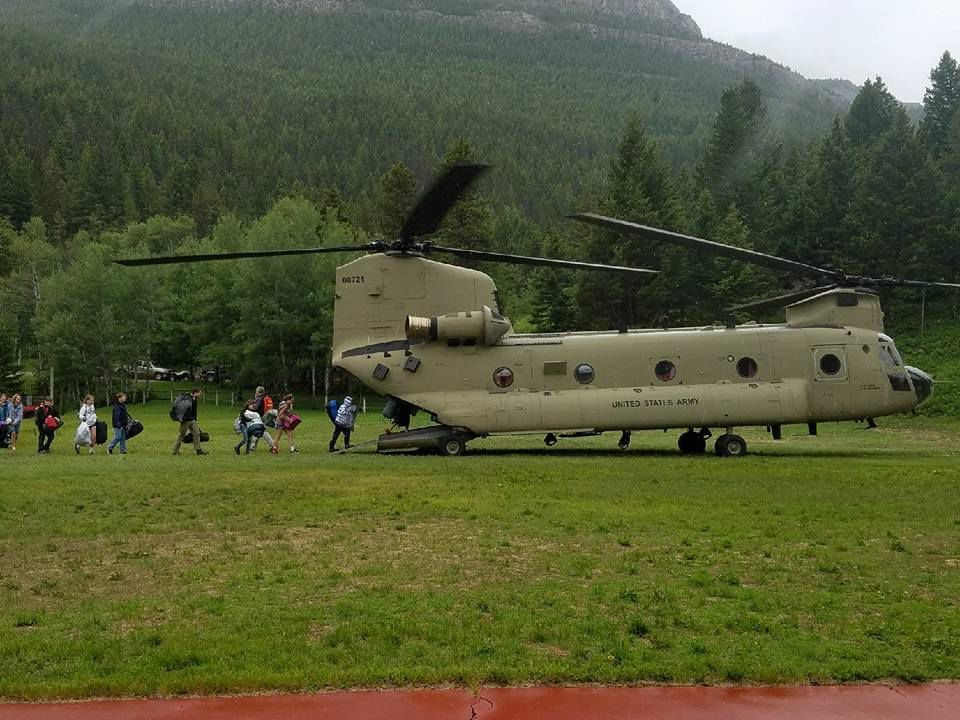 Recent rains across the Rocky Mountain Front caused flooding of the Dearborn River, washing out several area roads including the one to the Bible school located near the river and the Forest Service boundary.

Using two Chinook helicopters, the Montana Army National Guard evacuated 137 students and staff from the Montana Wilderness School of the Bible south of Augusta. The school became cut off after the nearby Dearborn River flooded and washed out the roads. Evacuees were transported to Great Falls.

Recent rains across the Rocky Mountain Front caused flooding of the Dearborn River, washing out several area roads including the one to the Bible school located near the river and the Forest Service boundary.

The Montana Army National Guard evacuated nearly 140 students and staff from the Montana Wilderness School of the Bible south of Augusta Thursday, after they became trapped due to washed-out roads.

Photos: 137 evacuated from Bible camp near Augusta after flooding washes out roads

The Montana Army National Guard and the U.S. Air Force assisted Lewis and Clark Search and Rescue in evacuating nearly 140 students and staff …

Recent rains across the Rocky Mountain Front caused flooding of the Dearborn River, washing out several area roads including the one to the Bible school located near the river and the Forest Service boundary. Officials were concerned that the 100 campers and 37 staff at the school were unable to leave. Parents were scheduled to pick up campers on Friday.

"Because of the kids being in there and as time wore on, food and water would be an issue, we decided for safety reasons we should get those kids out of there," Capt. Brent Colbert with the Lewis and Clark County Sheriff's Office said Thursday.

Contractors at a local ranch were also trapped in the area, according to the sheriff’s office.

The Montana National Guard said Gov. Steve Bullock approved the request from the Air Force Coordination Center at Tyndall Air Force Base in Florida to use two CH-47 Chinook helicopters and crew to assist county search and rescue. The helicopters were on the ground by mid-morning and transported the evacuees to Great Falls.

Federal, state and county officials continued to deal with floods caused by several inches of rain in the last few days that swelled rivers and creeks, closed roads and washed out bridges.

The Helena-Lewis and Clark National Forest said closures of Benchmark and Beaver-Willows roads west of Augusta also remain in place. Sun Canyon Road is open and passable to Mortimer Campground.

Flooding on the Missouri River and tributaries near Great Falls led the state to announce the emergency closure of several fishing access sites.

FWP announced the closure of the following sites:

The flooding in Lewis and Clark County, as well as parts of Cascade County and the city of Great Falls, prompted Gov. Steve Bullock to declare a state of emergency Wednesday afternoon. The declaration allows the state to mobilize the Montana National Guard and other resources to protect people and property.

On Thursday morning, the Lewis and Clark County Commission declared a county emergency. The declaration allows the county to free up money for the emergency and recoup some expenses from the state and federal governments.

The 82nd Annual Augusta American Legion Rodeo has been rescheduled due to flooding, but the kids carnival and street dance scheduled for Saturday will continue as planned.

"Augusta is a town that doesn't say quit," Tammy Dellwo, president of the Augusta Area Chamber of Commerce and owner of the Buckhorn Bar, said in a press release Thursday. "It's also a town that's been hit hard last year with wildfires and this week with the biggest flood we've seen in more than 40 years. We're asking and inviting people to come and celebrate the most charming town along the Rocky Mountain Front with us this weekend."

The kids carnival will be held at several locations along Main Street throughout the day Saturday. The street dance is scheduled for 7:30 p.m. on Main Street.

Rodeo festivities will now kick off July 21 with a parade at 1 p.m., followed by rodeo slack at 5 p.m. and music in the parking lot. The rodeo is scheduled to start at 2 p.m. on July 22. Tickets will be available the day of the event on the rodeo grounds. Call 406-562-3477 for more information.

Facebook page Into the Little Belts submitted this aerial footage of flooding near Augusta, Montana.