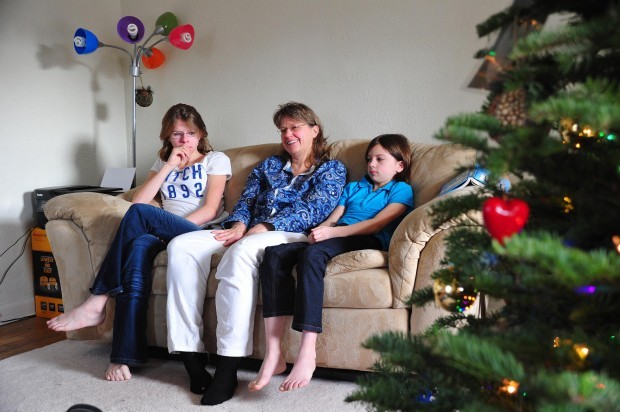 Eliza Wiley Independent Record - From left Lindsay Rumberger- Leffel, Deborah Rumberger and LiLi Rumberger- Leffel sit on their second hand couch in a living room with bare walls in their newest residence since having to evacuate from the 5th Avenue home that was infested with mold and sickening them. 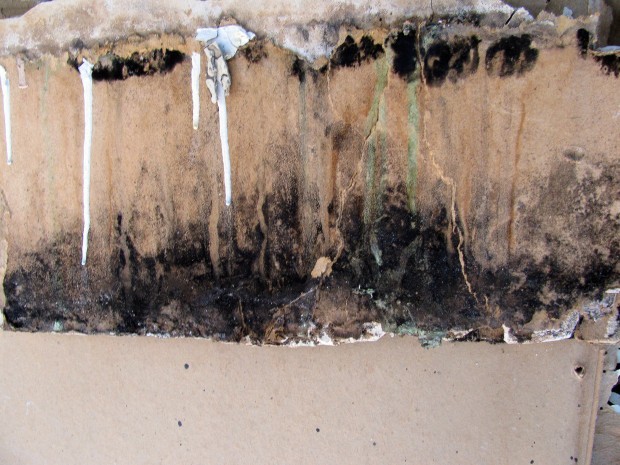 Eliza Wiley Independent Record - Patches of dense thick mold was discovered as a tub surround was removed in a bathroom of the Rumberger home.

The dream of being a first-time homeowner turned into a nightmare for Deborah Rumberger and her two daughters when they realized their new house was poisoning them.

Three types of toxic black mold in their Helena home were compromising the trio’s immune systems and its neurotoxins were making them ill. After nine months in the home, the family fled, first moving into a tent in their backyard, then into the YWCA, then into what they call the “garage apartment” and finally into a new rental. Along the way, they had to discard the girls’ toys, clothes, furniture and just about everything else that could carry mold spores.

“I kept our photos but they’re out in the garage. I’m afraid to bring them inside,” Rumberger said this week, seated on a second-hand couch in her immaculate and sparsely furnished home. “Maybe I can get them copied somehow.”

It was a little more than two years ago, in October 2009, that Rumberger and her daughters, Lindsay Rumberger-Leffel, now 15, and Liana Rumberger-Leffel, now 9, moved into their Fifth Avenue home near the Capitol. It is a cute bungalow with a swing on the front porch, and Rumberger, who works for the state, was thrilled to finally have a place to call her own. It also had an upstairs apartment, so it was an income-producing property as a bonus.

“I waited all my life for this,” she said.

But to Lindsay Rumberger-Leffel, something just didn’t feel right.

Rumberger knew from a pre-purchase inspection report that the house needed some work, and she had a plumber come in the day after they moved in to deal with a sewer-gas smell. But he and others couldn’t stop the smell, and it wasn’t until she talked to a previous homeowner — not the person she purchased it from — that she learned about the first flooding from burst water pipes.

The flooding occurred in February 1989, when temperatures hit about 30 degrees below zero and a runaway train rolled down MacDonald Pass into Helena. It exploded when it hit a freight train near Carroll College, which knocked out power to most of the Queen City.

“The tenant’s plumbing froze and he moved out,” Rumberger said. “Then when they thawed, a crack in the pipe leaked water for days.”

The owners tried numerous times to fix the leaks, but Rumberger said that when the upstairs had been turned into the apartment, the plumbing was routed along an exterior wall, which caused an ongoing freeze/thaw cycle. She added that the problem wasn’t disclosed, even though the property was inspected, when she purchased the house.

By Christmas, her daughters were getting sick. Lindsay was depressed and lethargic and had developed skin sores and a blood clot. Liana was sluggish and had chronic sinus problems. Rumberger was having difficulty breathing, had extreme thirst and her heart would pound. She also was lethargic.

After three months of plumbers not being able to fix the smell, Rumberger finally pulled down the “tub surround” — the plastic piece lining the walls around the bathtub upstairs — and was shocked to find evidence of toxic black mold. An air test confirmed a variety of toxic mold in the house, so she asked her tenant to move out.

When she pulled up the upstairs carpet, the floor was caked with mold. So was the flooring in the attic under the insulation. So was the stairway. So were the rafters.

“So I decided to make the best of what obviously had been a terrible choice. I wanted to figure out how to fix it, but that was the worst thing I could have done,” Rumberger said.

She contacted cleaning businesses and armed with $8,000 from the first-time homebuyer’s program, Rumberger bought white coveralls, bleach and gas masks, then hired people to start pulling apart her dream home.

But that only produced more spores.

They kept getting more odd symptoms, but few believed they could get sick from mold in the arid climate here, Lindsay Rumberger-Leffel said.

“No one suspected it in Montana,” she noted. “But mold is like cancer in the way it multiplies.”

“We lived in the tent for a month, then got rained out and lived at the (YWCA) for a couple of months. But we had developed chemical sensitivities, especially in old buildings, and kept moving from room to room at the Y to find one we could tolerate,” Rumberger said. “In September, we moved out to live in the garage apartment.”

The family tried to keep their belongings that weren’t porous, but eventually threw out everything to start from scratch because the mold was ubiquitous. They were living on donations from Food Share and friends, and Rumberger got a $23,000 bank loan to try to fix the house. But even when the home was gutted, they still couldn’t get a mold clearance test.

Rumberger isn’t sure why her family became so ill and others — like the woman she bought it from — apparently weren’t harmed. The family theorizes that some people just might be more susceptible to the mold.

Today, they’re trying to rebuild their lives in a small rental property in the Sixth Ward in Helena. They have a Christmas tree near the second-hand couch, a small computer and floor lamp, and a sign on the wall with a quote from John Lennon:

“When I was 5 years old, my mother always told me that happiness was the key to life. When I went to school, they asked me what I wanted to be when I grew up. I wrote down ‘happy.’ They told me I didn’t understand the assignment, and I told them they didn’t understand life.”

They finally sold their home at an $80,000 loss, but with full disclosure about the mold. The bank has forgiven that part of the mortgage, but Rumberger expects that will still cost her about $20,000 in taxes. She’s also repaying the interest on the $23,000 loan at about $175 per month.

They still have plenty of medical bills, but have selected homeopathic and naturopathic remedies and are slowly recovering.

And they’re in awe of the kindness of the Helena community, including the effort by three Helena High School students — Kaitlin Kroll, Jenny Stoneking and Jace Williams — who are holding a silent auction and fundraiser for them from 1 to 4 p.m. Jan. 8 at Hawthorne School.

“Initially we felt pretty alone,” Rumberger said. “But in the last year, people like Jenny and Kaitlin, and other friends of my daughters, my former neighbor, the people at my office, have just been wonderful. Now I want to make more people aware of the problems mold can cause, even in Montana.”

Lindsay Rumberger-Leffel has been friends with Jenny Stoneking and Kaitlin Kroll since they attended Helena Middle School together.

Eliza Wiley Independent Record - From left Lindsay Rumberger- Leffel, Deborah Rumberger and LiLi Rumberger- Leffel sit on their second hand couch in a living room with bare walls in their newest residence since having to evacuate from the 5th Avenue home that was infested with mold and sickening them.

Eliza Wiley Independent Record - Patches of dense thick mold was discovered as a tub surround was removed in a bathroom of the Rumberger home.