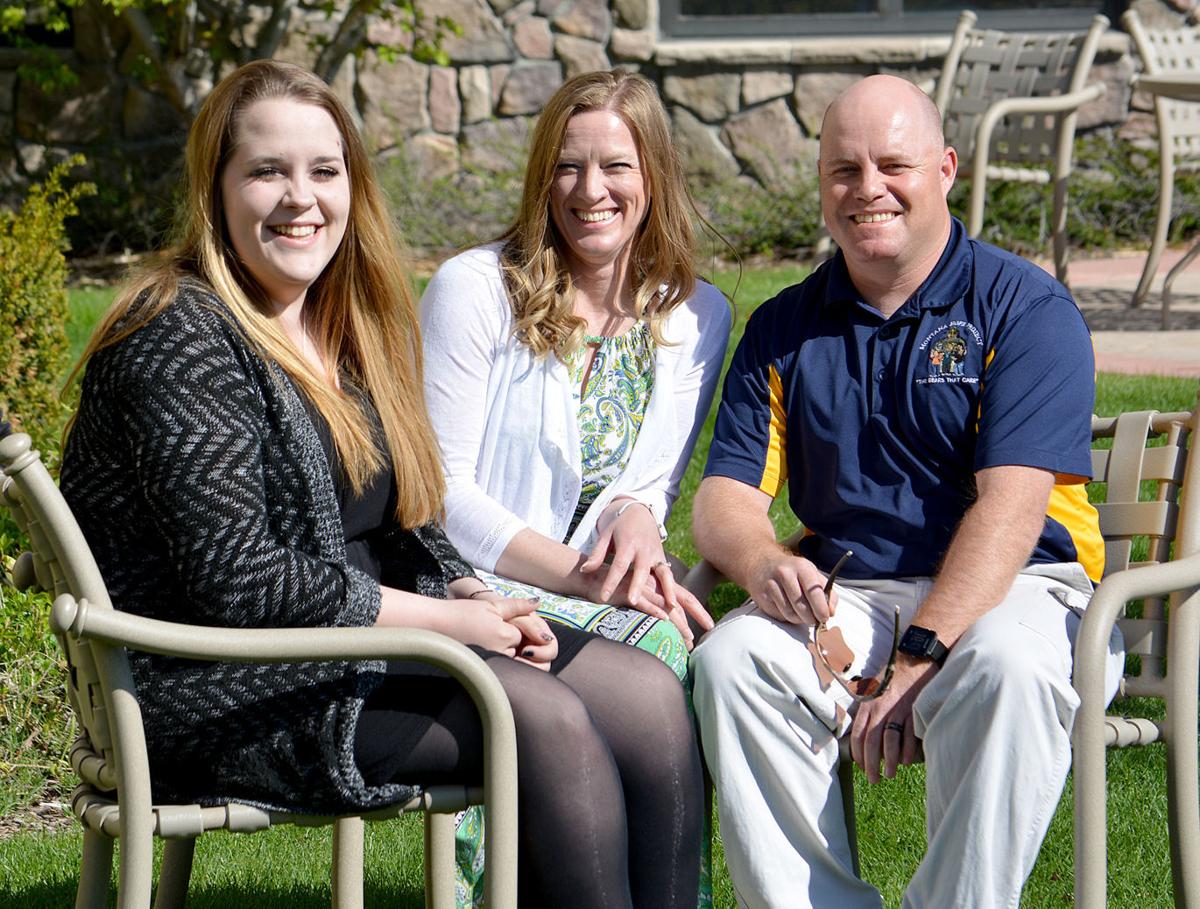 Charlie Heil, left, was on the path to dropping out of high school before she moved in with foster parents Lena Havron, center, and Ben Havron. 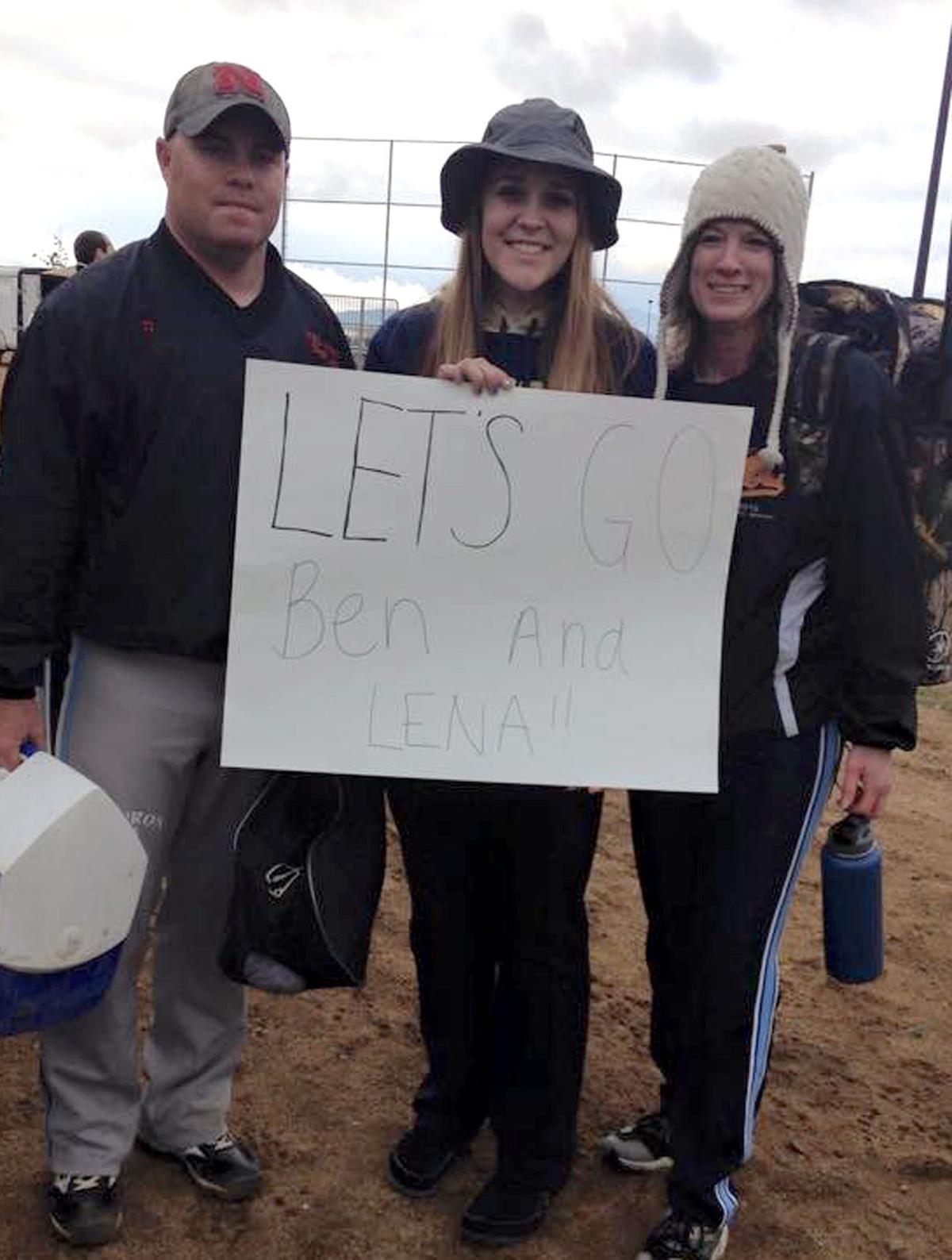 Ben and Lena Havron were the surprised recipients of a co-Foster Parents of the Year Award this week at the annual Prevent Child Abuse and Neglect Conference in Missoula.

The Helena couple claim they only did what they hope anyone would do in similar circumstances.

Two years ago, the Havrons opened their home to a teenager in need who they didn’t really know. She has thrived ever since.

Charlie Heil couldn’t be happier than to talk about how her life has changed by meeting the Havrons and why she nominated them for the foster parent award.

When Charlie was removed from her home April 11, 2014, a caseworker took her to a group home.

“It was terrifying,” Charlie recalled. “It was super scary.”

She was 16 at the time, she said, and was put in with teens who had criminal records, even though Charlie hadn’t committed any crime.

Lena recalls that she and Ben were at a soccer field watching Ben’s daughter, Megan, play when Lena got a call from a friend, and they learned of Charlie’s plight.

This friend’s son was a friend of Charlie’s, but their household couldn’t take Charlie in.

Ben and Lena started talking to each other about whether they could help.

By the end of the soccer game, they broached the topic with Megan, who was soon on board.

All Charlie had with her was a tiny duffle bag with four changes of clothes and a pair of pajamas.

“I felt so bad for her,” said Lena, because suddenly Charlie was plunked down in a group of strangers.

But Charlie remembers the day glowingly.

“Lena walked out and hugged me and said, “‘Welcome home.’

The Havrons also gave her her first birthday party and have attended her school events.

“They have supported me through everything and have helped me achieve goals that I never thought …(were) possible for me to achieve,” she wrote in her nomination of the Havrons. “I couldn’t have asked for more amazing foster parents.”

“We didn’t think we did anything outside of the ordinary,” said Lena. “We haven’t done anything special. ...We just put a roof over her head and provided her with a future.”

“We weren’t even licensed foster care parents at the time,” Ben recalled. But since he works for the Highway Patrol and Lena worked for the Department of Corrections, they’d both had background checks.

So they sort of “fell into it.”

“Charlie is a sweetheart,” said Ben his blue eyes smiling as he sipped his coffee at The Hub. “She’s a great kid. She’s genuinely one of the nicest kids I’ve ever been around. She’s been easy. ...I don’t know if a lot of foster parents can say the same thing.”

“You always want to do the right thing,” Lena said. “It may not necessarily be the easy thing.”

But they’ve taken their role as parents to heart.

“Charlie had a 1.2 grade point average and had missed 54 days of school” when she moved in, said Lena.

Because she’d been absent so much, Charlie was in a remedial class and had been called dyslexic.

Soon she was excelling and had moved out of the remedial class. And she was loving school and life and trying a host of new things -- from bow hunting, to fishing to school activities.

“They’re just doing it (being foster parents) because they have big hearts,” Charlie said. “I definitely would not be where I am without Ben and Lena and experience the things I am and going to college, which I never thought would happen.

“I’ve had an amazing experience in care,” Charlie said. “My confidence has definitely gone up. ... I participate in Big Brothers Big Sisters. I’m more outgoing. I take more pride in my education. I’ve gotten more involved in school stuff.

And recently the Helena Education Foundation selected her as one of their distinguished students for 2016.

In fall, she’ll start college at University of Montana Western.

But it’s not just Ben, Lena and Charlie who’ve seen the changes.

“It’s been a really big transition,” said 16-year-old Megan Havron, who was 14 when Charlie moved in with them.

“It’s been really cool to have her around,” Megan said. “I treat her like my sister. She’s changed as a person in every way. ...Charlie and I became really, really close -- she’s a sister figure to me.”

“There’s just an amazing change in Charlie as a student and as a person,” said Kathy Kidder, Capital High School assistant principal.

“I’ve seen her become an outgoing person eager to make friends. She’s proud to be successful. She’s involved in so many things at the school. She’s happy. She’s so proud to achieve.”

“She has goals for the future,” said Kidder. “College. She has a plan. I’ve just seen her grow so much as an individual. ..It’s absolutely amazing.”

The other co-Foster Parent of the Year was Yuvanne Turney of Dillon. The awards are presented by the Department of Public Health and Human Services.

'I definitely would not be where I am without Ben and Lena and experience the things I am and going to college, which I never thought would happen.'

The Bureau of Land Management is offering a reward of up to $500 for information leading to the identification, arrest and conviction of those…

The City of Helena is currently meeting to discuss the funding of the Helena Police Department.

One of the most beautiful souls we will ever have the privilege to know, Kestin David Noel, blessed this world September 16, 1997. From the da…

Amid a debate in Helena over reevaluating the role of school resource officers, the East Helena school district voted unanimously Monday to ap…

Charlie Heil, left, was on the path to dropping out of high school before she moved in with foster parents Lena Havron, center, and Ben Havron.