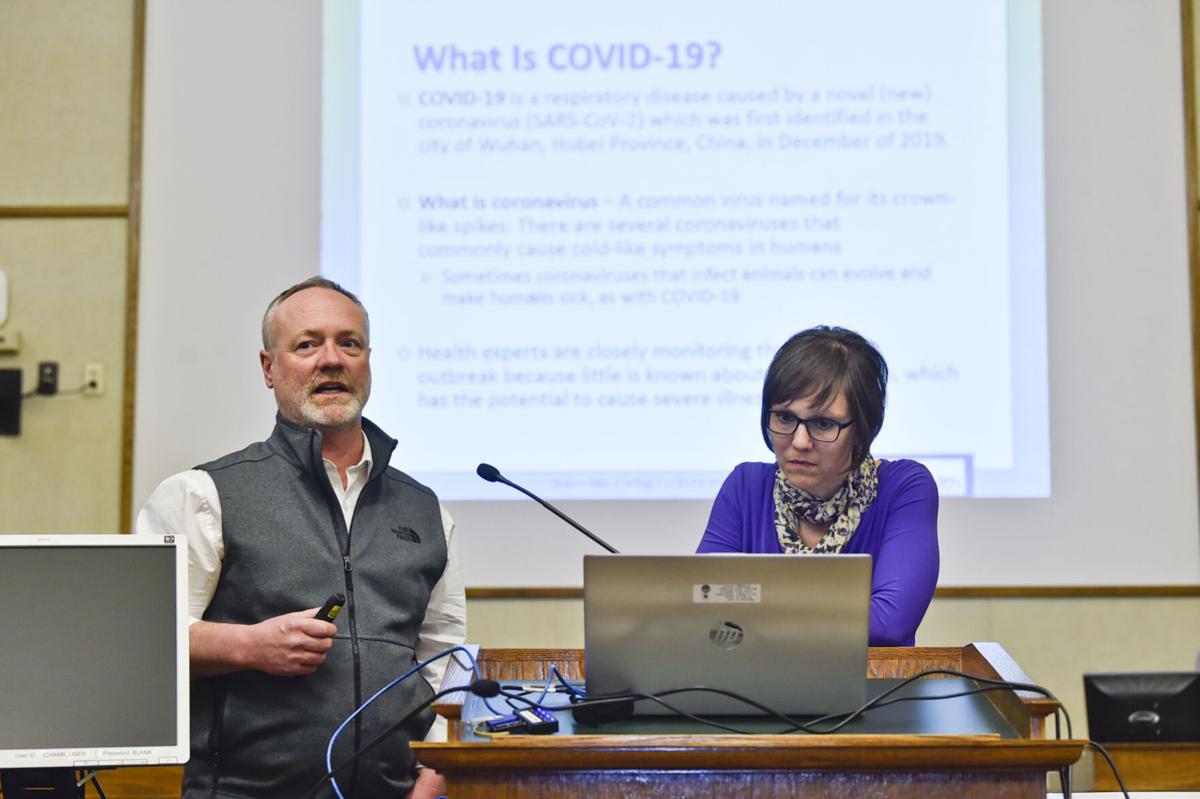 Eric Merchant, disease control and prevention division administrator, left, and Drenda Niemann, Lewis and Clark County public health officer, give an informational briefing on the coronavirus that causes COVID-19 March 10, 2020, in the City-County Building in Helena in this IR file photo. 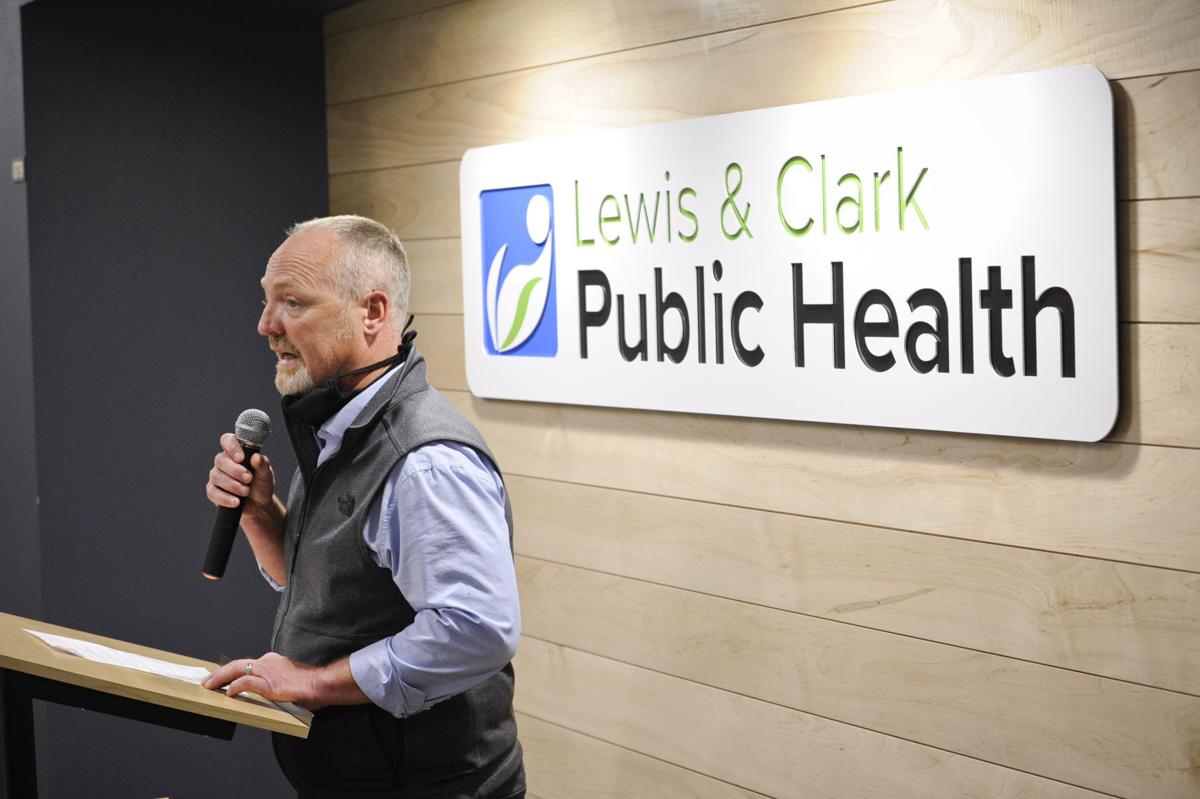 Eric Merchant, disease control and prevention administrator for the county, speaks at a July 1 press conference at Lewis and Clark Public Health in this IR file photo.

This past year may have been the most frustrating of Eric Merchant's 23 years of public service, but the Lewis and Clark County health official said it is also the one year in his career of which he is proudest.

The Lewis and Clark Public Health disease control and prevention administrator retired from his post Wednesday, following possibly the most tumultuous year in the history of the profession.

Public health employees in Lewis and Clark County and across the country have been demonized for more than a year by many who believe their efforts to help prevent the spread of COVID-19 went too far.

"In this job you give a lot. I realized I was at a point after this year where I needed a break," Merchant said of his decision to retire.

Through it all, he and his colleagues have remained undeterred in their mission to help protect the health and the lives of people in their community, including those spewing vitriol at them over the phone, on Facebook and in-person.

In an interview Thursday, Lewis and Clark County Health Officer Drenda Niemann said her team has worked hard to support each other over the past year. Niemann described a morning when an employee who answers the health department's phone broke down in Niemann's office because of "the meanness, the ugliness coming from people."

"She said if it weren't for the support we wrapped around her, she would've left a year ago," Niemann said.

One commenter on the Independent Record's Facebook page going by the name of John Elliot wrote of public health officials "ya better believe people are coming for you." Another commenter going by Deanna Read likened the local public health department to the Soviet Union agency that oversaw forced labor camps and mass executions.

Still Merchant chalked it up to human nature and said it comes with the territory.

"It's part of the job," he said. "I don't fault our community. We all had a hard time with this."

Despite Merchant's stiff upper lip, Niemann said she could see he was "on the brink of being in a really bad place."

A little more than 23 years ago, a fresh-faced 26-year-old Merchant arrived in Montana just out of graduate school in his home state of Minnesota to start his new career at the Montana Department of Environmental Quality.

He said he loves this state. As a youngster, he regularly visited Montana's pristine trout streams with his father, fly rod in hand.

From 1998 until 2015, Merchant worked with industries in the state to help them craft plans that would bring their operations into compliance with air quality standards.

By the summer of 2015, Lewis and Clark Public Health's Disease Control and Prevention Division needed an administrator. Merchant, having an advanced degree in public health, called it a perfect fit.

"The public service aspect really appealed to me, directly working with the public to help them be safe," Merchant said.

Before the novel coronavirus came to dominate seemingly everything about our lives, public health employees like Merchant were busy monitoring and controlling other diseases. He helped investigate, monitor and control outbreaks of sexually transmitted diseases, food-borne illnesses and environmental illnesses in the community.

Niemann was a fellow division administrator when Merchant joined the team.

She recalled one of her "most beautiful memories" from the time. In an effort to better explain the health department's formal process of evaluating its failures to the joint city and county health board, Niemann decided to write a skit. She said Merchant, without hesitation, agreed to play the role of the skit's superhero.

"That was Eric Merchant. He was always the first to say, 'Yeah, I'll put on a wig and a cape,'" Niemann recalled with a laugh.

Merchant said one of his greatest passions during his time at LCPH has been working in concert with the local, state and federal governments to bolster Lewis and Clark County's programs concerned with HIV and AIDS testing and prevention.

The county was struggling to connect with and build trust among the most vulnerable populations, gay men and intravenous drug users.

Merchant got to work bringing together partners such as the Gay Health Task Force in Missoula, local law enforcement agencies and peer counselors. He set up a free HIV testing clinic on Last Chance Gulch and organized routine events put on by "people with credibility among those populations," he said.

Through the group's efforts the county has managed to increase HIV testing by 90% since 2014 as well as open doors to other public services for those people.

"It was his ability to build relationships that made him so successful at his job, knowing the importance of pulling in partners, generating community buy-in," Niemann said. "He was always looking for ways to improve what we were doing here."

Lewis and Clark County Board of County Commissioners Chairman Andy Hunthausen said Merchant's work has left a lasting, positive impact on the community.

"That was one of Eric's great talents, being able to reach out to different communities," Hunthausen said in an interview Wednesday. "That's one of the gifts to the county he left behind, those lasting connections."

By early December, Lewis and Clark County was regularly breaking its new daily COVID-19 case records. The peak came Dec. 4 when 176 county residents tested positive for the life-threatening illness in a single day.

New cases appeared to be subsiding as the new year approached until another spike. More than 100 county residents tested positive Jan. 4.

Less than a week later, Merchant was shopping for groceries at Super 1 Foods on Custer Avenue when he noticed numerous patrons not wearing face masks, flaunting the statewide mandate and putting those around them at greater risk.

Suddenly, the failure of Merchant's "great talent" for connecting with the community and generating public buy-in during the global pandemic was more obvious than ever.

"He took his job and his responsibilities very seriously, sometimes to his detriment," Niemann said, adding that Merchant's desire to help the community understand the gravity of the situation was often perceived as dictatorial. "When really in his heart he cares so deeply about the people in this community."

Merchant admittedly lost his composure that afternoon in the grocery store. He lashed out at the customers.

According to a Helena Police Department call for service information report, a complainant called the police at about 1:45 p.m. on Jan. 10 to report that Eric Merchant was being "verbally aggressive toward other customers."

Merchant was trespassed from the store.

"I could've acted better," Merchant said of the incident. "I basically lost my cool."

While some social media users and bloggers have circulated a much more damning account of the incident written by someone claiming to be a store employee, neither Helena Police Chief Steven Hagen nor the manager of Super 1 Foods on duty during the incident knows where it came from.

"If the narrative you are referring to is the one that is posted on Facebook, I don’t know who wrote that," Hagen said in an email. "Facebook was the first time I saw it."

The individual who provided a copy of the note to the Independent Record declined to answer questions about its origin and validity.

Still, Merchant said the incident had nothing to do with his decision to leave.

After leading Lewis and Clark County to the highest vaccination rate in the state and one of the highest in the country as well as becoming one of the most important voices on the state's COVID-19 task force, Merchant is calling it quits.

"My family and friends have been very supportive of my decision," he said. "I'm grateful for this opportunity. I'm 49 years old and I have an opportunity now to go out and start a new thing."

Hunthausen called Merchant the expert the county turned to during this unprecedented crisis.

"From the county side, he was our leader," Hunthausen said. "Those are huge shoes to fill if they even can be filled. ... The amount of lives he and the rest of our health department saved is significant."

Niemann said she is going to miss having Merchant on her team.

"Even on his last day, he was still doing everything he could to ensure today was better than yesterday," she said. "You can't ask for anything more from an employee or a colleague or a friend."

Target and Starbucks will not require masks for fully vaccinated customers

Many workers won't return to old jobs after COVID

Many workers won't return to old jobs after COVID

Lewis and Clark County is shifting its COVID-19 vaccine distribution plan from centralized drive-thru clinics to a mobile approach, as vaccine…

Prior to this past year, not many people could name Lewis and Clark County's health officer, but it was not long into the global health pandem…

Helena Public Schools has released plans for this year's high school commencement ceremonies, which will likely have a much higher attendance …

Many thanks are in order for the outstanding implementation of the COVID-19 vaccine distribution. The entire operation was seamless and made t…

St. Peter’s Health officials said Tuesday that appointments for the COVID-19 vaccine would be available to all patients 16 and older starting …

Dan Kerpa got a shot of the Johnson & Johnson vaccine Monday, noting he was happy to be a vital pawn in the ongoing scientific battle agai…

Eric Merchant, disease control and prevention division administrator, left, and Drenda Niemann, Lewis and Clark County public health officer, give an informational briefing on the coronavirus that causes COVID-19 March 10, 2020, in the City-County Building in Helena in this IR file photo.

Eric Merchant, disease control and prevention administrator for the county, speaks at a July 1 press conference at Lewis and Clark Public Health in this IR file photo. 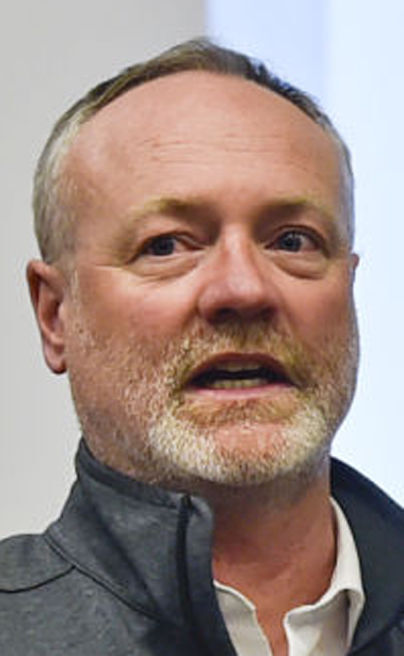