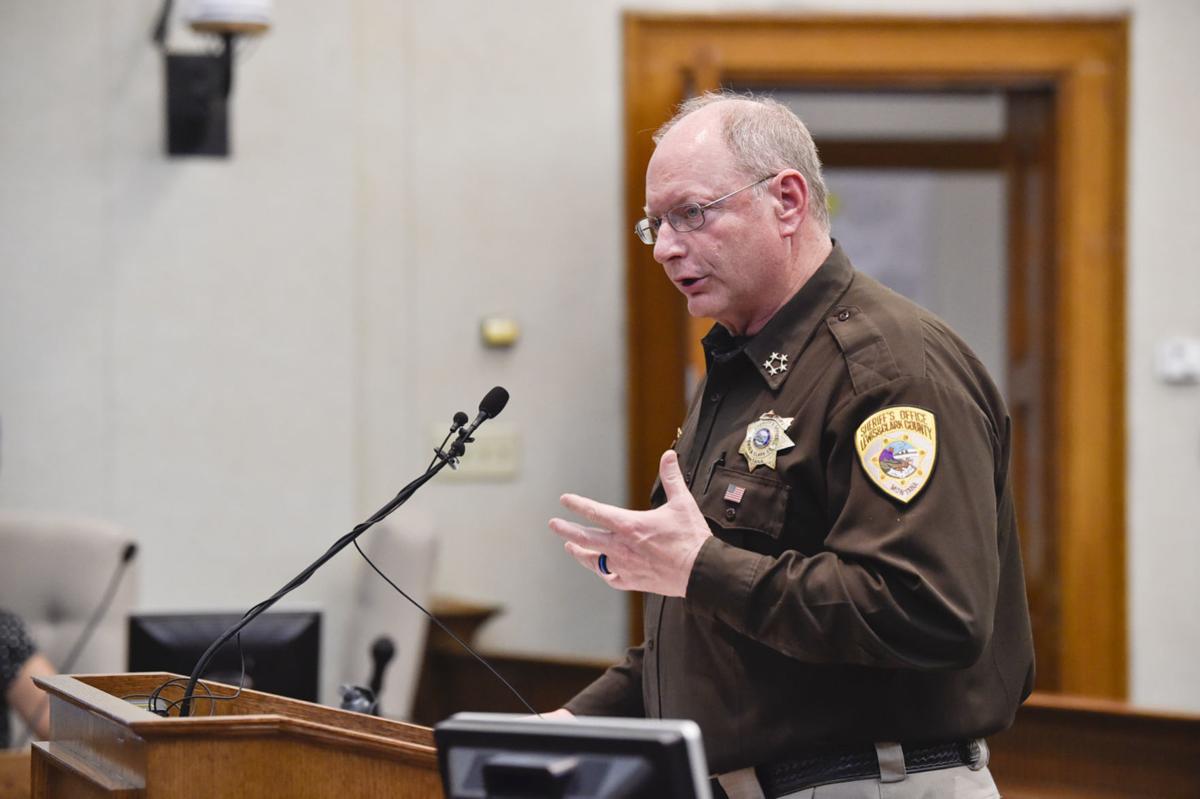 Lewis and Clark County Sheriff Leo Dutton speaks to the County Commission on Wednesday during a special meeting on policing protocols. 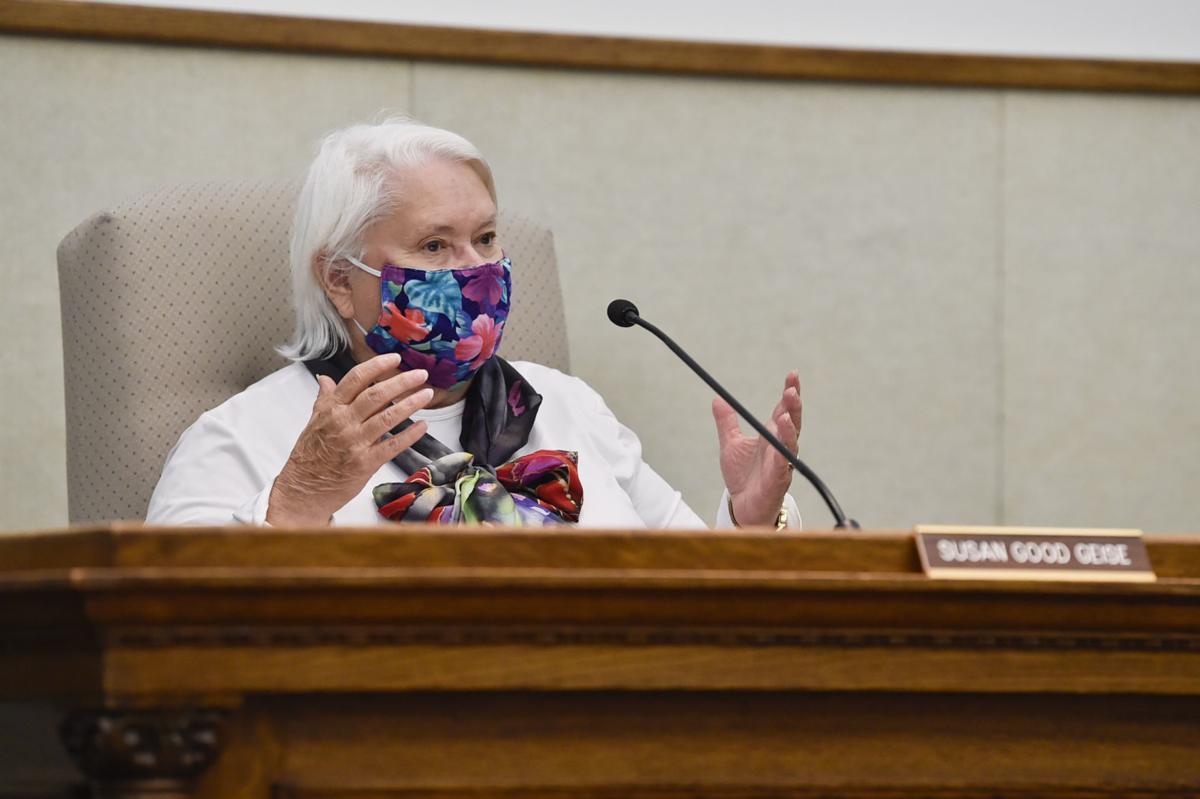 Lewis and Clark County officials said Wednesday that they have already committed to many progressive law enforcement practices and funded mental health services that are being pushed by advocates of policing reform.

The Lewis and Clark County Commission scheduled the special public meeting in response to the national discussion about policing practices sweeping the nation after the death of George Floyd when former Minneapolis Police Officer Derek Chauvin knelt on his neck for nearly eight minutes. Commission Chair Susan Good Geise said she felt it was important to hold a meeting in light of numerous calls the county has received to redirect a portion of funding from local law enforcement agencies to other community services.

"People don't know," Geise said. "Because there is a lot of conversation and they may as well have the facts as we know them."

Dutton addressed the commission and members of the public, whom he referred to as his bosses, about ways in which his office has adapted with the times. His deputies are trained in progressive policing practices that include greater cultural awareness, emerging issues among Native American communities and how to avoid racial profiling, he said.

After some lawmakers raised concerns during the 2009 legislative session about racial profiling among Montana law enforcement agencies, the Lewis and Clark County Sheriff's Office began logging the race of individuals pulled over for traffic stops, according to Dutton.

He added that since 2003, his office has implemented the use of dashboard cameras and body cameras and outlawed the use of chokeholds by deputies detaining people, although each came with its own caveat. The use of dashboard cameras was implemented because the office felt a deputy's word was no longer trusted by jurors; that the body cameras "felt intrusive;" and Dutton still authorizes chokeholds when a deputy feels his or her life is at risk.

The sheriff pointed to the approximately 540 hours of Montana Law Enforcement Academy training and 40 hours of crisis intervention training as further examples of his office's progressive policing tactics.

"This training, it's expensive, it's time consuming, it takes them off the street, but, man, when you need it, like what's happened here in the last 30 days, man, you really need it," Geise said.

Geise said the county is committed to have future conversations on the topic.

When asked what aspects of law enforcement have been looked at with an eye for possible improvement, she said they have not yet.

"In the last 30 days, I know that those folks who wear these uniforms have been busy with COVID issues and meetings and protests and counter protests...," she said, adding that the various organizations Dutton is involved with, such as his role as vice president of the Western States Sheriffs' Association, will be "taking a new and renewed focus to look at these issues to identify if we have any deficiencies, where those might be and what the action points might be to get those resolved."

Hunthausen and McCormick gave detailed reports of their efforts on the Human Services Task Force and in the area of mental health.

Local calls for police reform have mostly included a desire to use funds diverted from law enforcement agencies for social services that have seen state-funded budgets slashed in recent legislative sessions.

McCormick participates in the county's Human Services Task Force and provided insight during the meeting as to that board's efforts within the community.

"I want you to know what you, the taxpayers, support through your tax dollars," he said.

He also pointed to various nonprofit organizations in the area, such as YWCA Helena and Good Samaritan Ministries, all of which are independent of the county government.

"I think this is something that most people don't know, that these are some social services that in other areas that they're talking about diverting funds these are funds that we are already expending," Geise said.

Hunthausen spoke for 30 minutes about the decade-long process of reforming the local justice system, including the $8.3 million upgrades to the Lewis and Clark Detention Center, an investment in its Department of Criminal Justice Services and ongoing work to hammer out a partnership with St. Peter's Health to pick up the slack left behind by the closure of the Journey Home, a mental health crisis stabilization facility.

"I think we need to continue to challenge our system," Hunthausen said.

Lewis and Clark County's Chief Administrative Officer Roger Baltz said during the meeting that the county spends more than $1.6 million a year on social services through out-right allocations from the general fund, grants and mill levies.

"If you want to know what is a priority and what matters to you, take a look at what you spend your money on, and certainly our county government is spending money and has identified these types of issues as priority to budget money toward," Baltz said.

The commission afforded members of the public opportunity to provide comment on the topic. The half dozen who did expressed their support of local law enforcement agencies.

Three petitions are circulating Helena to prompt a recall vote of the mayor and two city commissioners.

"Meetings of the advisory boards that perform valuable advisory functions but are not legally required to act before final city action are cancelled until further notice," the resolution states.

Despite measures in place to reduce the number of inmates held at Lewis and Clark County Detention Center, the population has climbed back to …

Fox says MVD has been improving, and county rejected some state help

The Bureau of Reclamation is changing the names of two campgrounds on Canyon Ferry Reservoir that had controversial or racist names.

As conversation about the role of policing happens nationally and locally, Lewis and Clark County Sheriff Leo Dutton sat down with Brian Kahn …

The Lewis and Clark County Board of Commissioners signed off on a partnership between its public health department and St. Peter's Health to f…

Lewis and Clark County Sheriff Leo Dutton speaks to the County Commission on Wednesday during a special meeting on policing protocols.