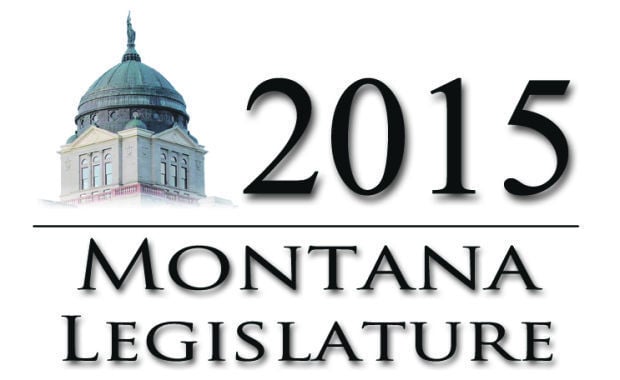 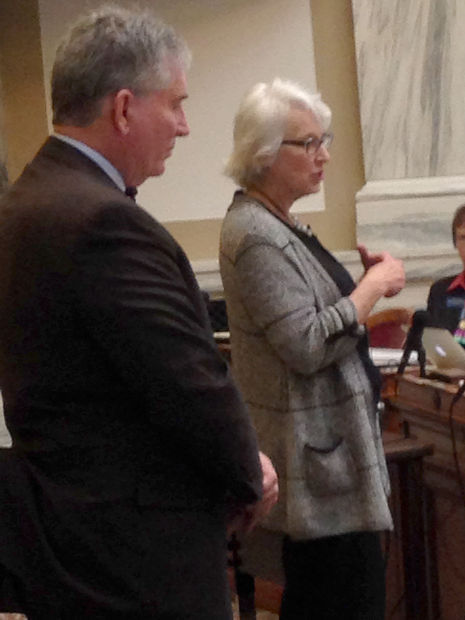 Speaking to legislators on Wednesday are former Utah House Speaker David Clark, left, and former House Minority Leader Peggy Kerns, who is director of the Center for Ethics in Government in Denver.

Members of Montana’s part-time citizen Legislature received ethics training Wednesday, with much of the discussion about potential conflicts of interest.

About a third of the 150 legislators attended the session, which was a follow-up on an earlier training session in December. Some lawmakers had other committee meetings.

The main presentations were by former Utah House Speaker David Clark, who was a banker in his private life, and former Colorado House Minority Leader Peggy Kerns, a former businesswoman and federal official who now is director of the Center for Ethics in Government, located at the National Conference of State Legislatures in Denver.

They spoke about, and sought comments from lawmakers, on a video featuring actual ethical issues faced by legislators in other state.

Montana legislative staffs earlier had lawmakers take a series of individual ethical exams. The quiz may be found here: http://leg.mt.gov/css/For-Legislators/ethics/ethics-quiz-1.asp.

Kerns said her presentation was not intended to make legislators ethical.

“You already have your ethical standards that you grew up with from your parents, your church or your community or whatever,” Kerns said. “This is just to help you acknowledge that your work here as a public servant goes beyond maybe what you see immediately, that you have tensions and dilemmas that enter into your role all the time, and not unlike your counterparts you sit next to on the floor.”

Clark said what ethics means in the big picture is the ability of legislators to be trusted by their colleagues, their constituents and their family.

“The currency we have as legislators is trust,” he said.

Clark said in his dozen years in the Utah Legislature, conflicts of interest were where lawmakers got tripped up.

“We all have outside occupations and interests,” he said. “In fact, I think that’s what makes this fabric stronger as a Legislature, is having that diversity, having that ability to go have to home and have to make a living. But to able to manage that conflict of interest, I think, is at the heart and core of where your ethics are going to tested.”

She was an urban legislator who said for some reason got assigned to the Agriculture Committee in the Colorado House, with mostly farmers and ranchers serving on the panel.

“I was impressed by how they separated their potential conflicts of interests,” Kerns said. “If it affected them directly in a financial way, they asked to recuse themselves (on the vote). But if it affected the industry as a whole -- as in all teachers or all employees of state government or all ranchers and farmers or all attorneys -- that was not viewed as a conflict of interest.”

That’s how most state legislatures handle conflicts of interests, she said.

“It’s pretty generally understood that if you, yourself, have a direct financial interest, you should not carry the bill and you should not vote for the bill. You should recuse yourself,” the ethics center official said. “But if you’re part of the group, and everybody in the group benefits the same way, then you don’t have a direct conflict of interest because your constituents elect you here to vote. You need to be on record how you vote.”

A 59-year-old Helena Valley man died Tuesday after attempting to get out of his idling truck as it rolled forward.

A 43-year-old man from Keene, New Hampshire, was arrested in Helena on suspicion of having sexual intercourse with a girl less than 16 years old.

After failing to meet previously set goals for waste reduction, the city of Helena is once again aiming high.

Speaking to legislators on Wednesday are former Utah House Speaker David Clark, left, and former House Minority Leader Peggy Kerns, who is director of the Center for Ethics in Government in Denver.