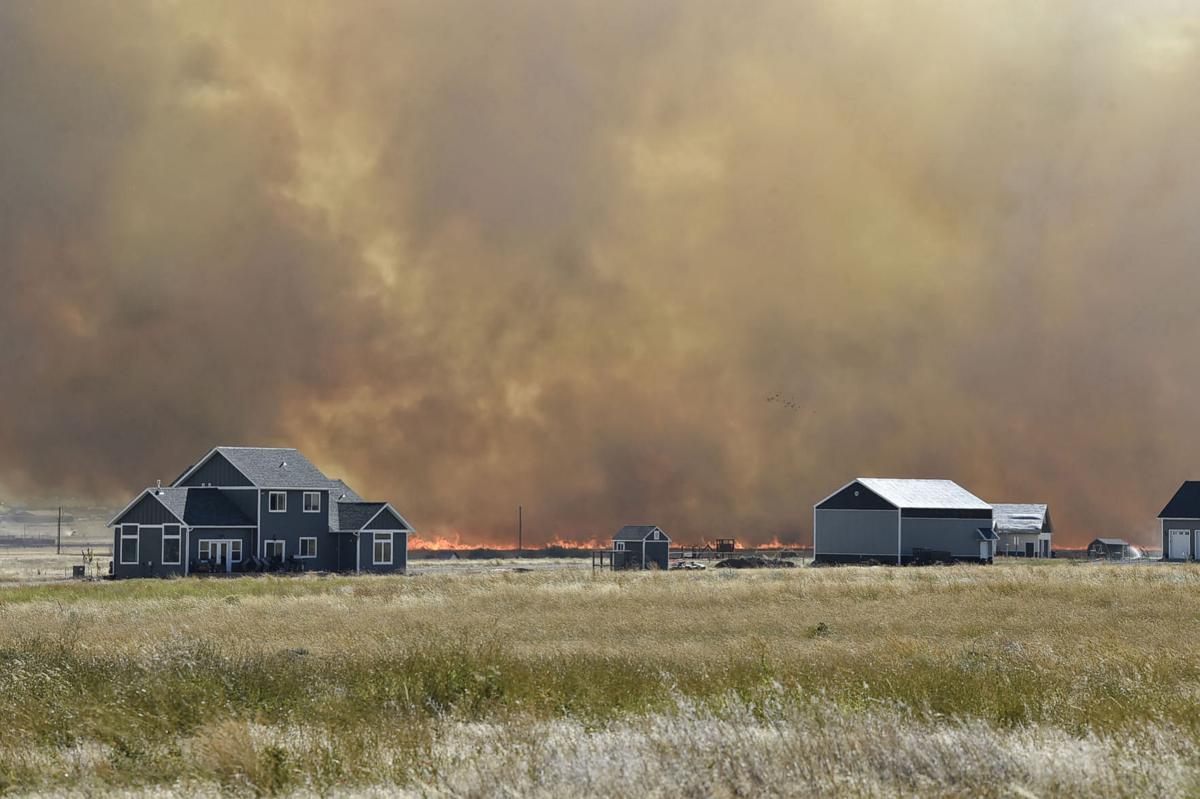 Smoke fills the sky near homes in Birdseye off of Head Lane as a wildfire burns northwest of Helena on Wednesday, Sept. 2. 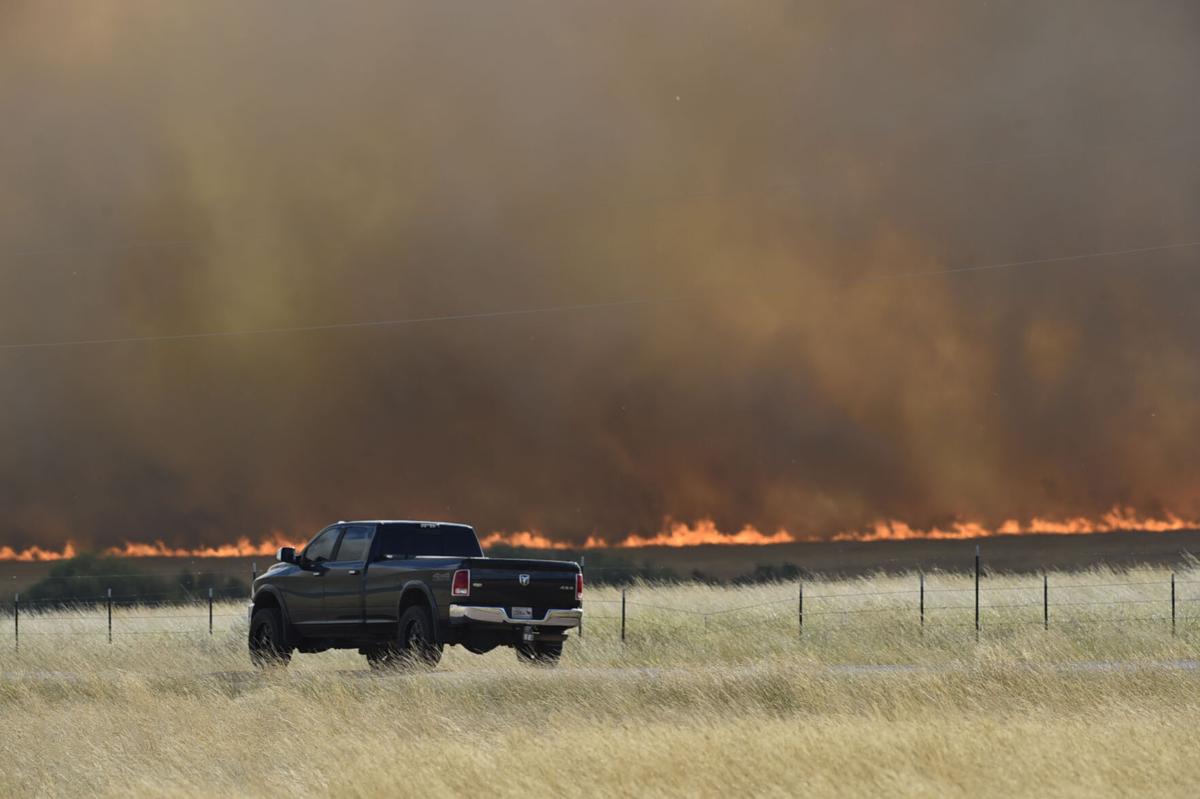 A view of the Birdseye wildfire near Head Lane on Wednesday, Sept. 2. 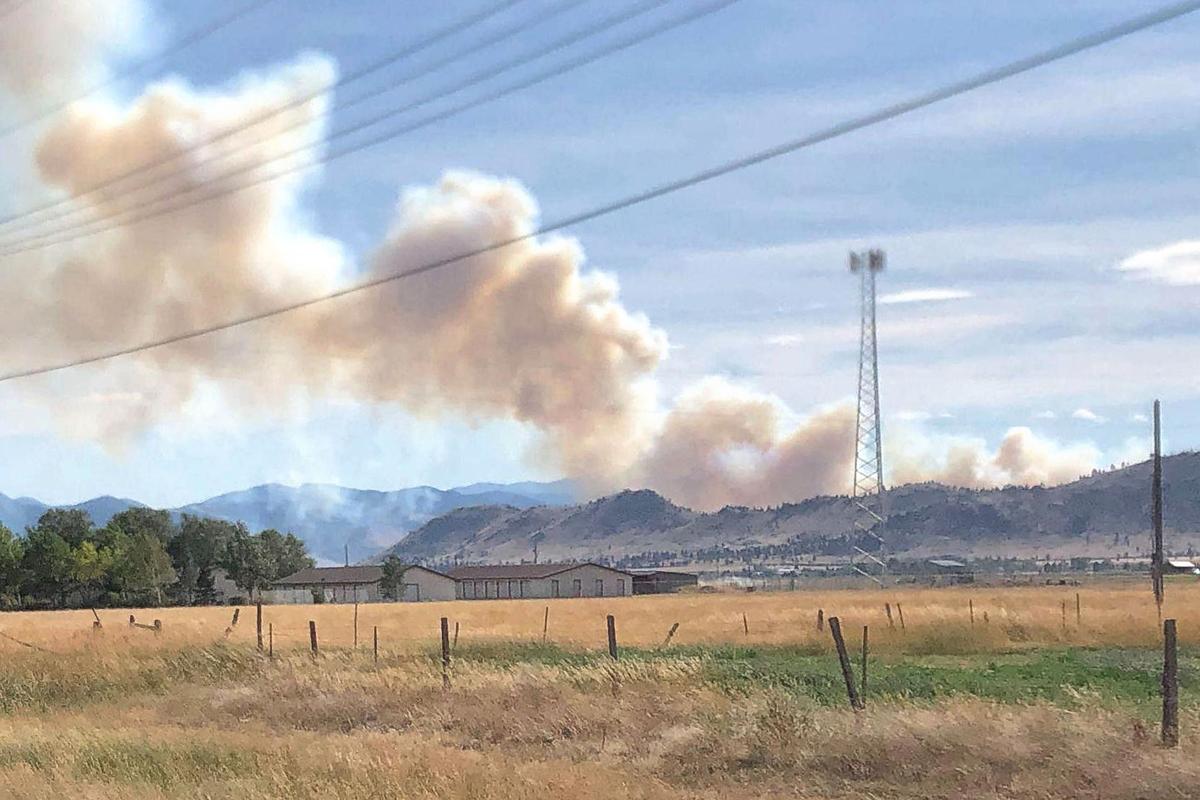 A fast-moving wildfire burned about 800 acres northwest of Helena Wednesday afternoon and caused the evacuation of part of the West Helena Valley.

The Birdseye fire sparked near where Birdseye Road crosses the railroad tracks north of Fort Harrison at about 4 p.m. Wednesday. The blaze quickly grew under red flag conditions including high winds and low relative humidity, sending a large column of smoke over Helena.

“It was extreme fire behavior,” said Chris Spliethof, incident commander with the Montana Department of Natural Resources and Conservation. “In some areas we were getting 10- to 20-foot flames.”

The fire threatened several houses and damaged fences in the area. It burned mostly in grass and sagebrush but did hit a creek bottom with willows as well.

“It burned right up to a few houses – a half dozen structures had fires close to them but they were able to get engines in there in the nick of time,” Spliethof said.

One historic building in the area was damaged, although authorities did not immediately have the name of the building.

Firefighters were mopping up the fire as of 7:30 p.m. but Spliethof expected crews to remain on scene the next three or four days.

About 100 rural volunteer firefighters responded to the fire, as well as the DNRC, city of Helena and helicopters from the Montana Army National Guard, said Paige Cohen with DNRC. The fire was being managed under a unified command among the departments and the state.

The cause of the fire remained under investigation Wednesday evening.

Evacuations for residents was lifted at 8:30 p.m. Authorities asked that others remain away from the area.

The Red Cross has established an evacuation point at the Helena First Church between National and Elm Streets for residents affected by the fire. The public may also call 447-1605 to get a recorded update from the Lewis and Clark County Disaster and Emergency Services Coordinator. Large animals may be brought to the fairgrounds.

A gravel driveway around the Millis home

Utilities were damaged and a garage window was blown out

A grasshopper clings to a burnt plant

A water testing site was burned

Gerry Hill first came to understand the value of Court Appointed Special Advocates, or CASA volunteers, during his last six years working for …

Whether hiking a high ridge top in search of blue grouse or working the brush of a fence row anticipating a flushing rooster, Montana’s upland…

Even without surveys, waterfowl hunters have reasons for optimism

The driver was ejected during the crash and suffered fatal injuries, MHP said.

Applications for unemployment assistance increased in Montana for the third consecutive week, even as national numbers are falling.

Driven by high winds, the Birdseye fire burned about 800 acres of grasslands in about an hour and a half and triggered evacuations for a portion of the West Helena Valley.

Sara Madsen, 24, of Tetonia, Idaho, was pronounced dead at the scene in the crash south of Ashton, Idaho, the Idaho State Journal reported.

Among the numerous challenges Lewis and Clark County schools have faced during the COVID-19 pandemic, one of the most difficult to overcome ha…

Vendors at the new Meadowlark Farmers' Market were doing a brisk business Saturday morning. The market, which received approval from Lewis and…

Helena Public Schools superintendent to step down in 2021

“I’ve given everything I can and continue to give everything I can to Helena and to the school district, and that comes with personal ramifications and whether or not I can do that and do the job I need to as a husband and a father.”

A new program in southeast Helena aims to help homeowners make their homes safer from wildfires.

Authorities unable to determine cause of Birdseye fire near Helena

The Helena Interagency Fire Team investigated but due to firefighting efforts, evidence of the cause was degraded to the point that investigators were unable to reach a conclusion, said Lewis and Clark County Sheriff Leo Dutton.

Smoke fills the sky near homes in Birdseye off of Head Lane as a wildfire burns northwest of Helena on Wednesday, Sept. 2.

A view of the Birdseye wildfire near Head Lane on Wednesday, Sept. 2.