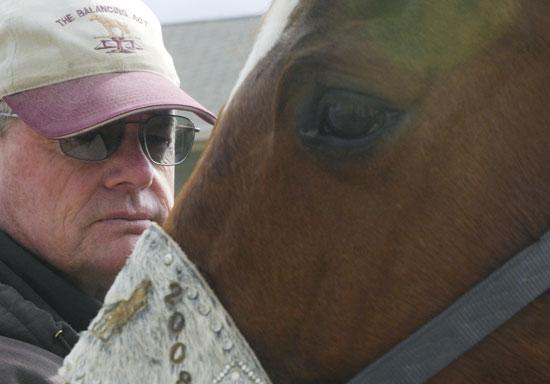 Lisa Kunkel Independent Record - Sid Erickson watches the horse’s reaction to his adjustment during a treatment. 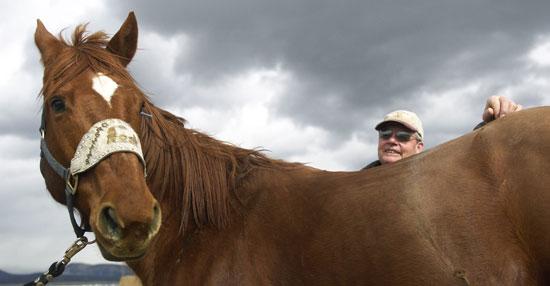 With the touch of his hands, Sid Erickson relieves animals of their pain.

It's not that simple, of course -- Erickson isn't a miracle worker. But through hundreds of hours of training, this licensed veterinarian has gained the knowledge and certification to perform chiropractic care, acupuncture and applied kinesiology on large animals. He primarily works with horses, caring for some 2,500 performance and pleasure animals each year, but he also works with about 500 dogs annually, providing treatment for family pets and competitive animals.

Erickson, who operates The Balancing Act out of his North Valley residence, travels roughly 40,000 miles each year, ranging from Boise, Idaho, to Billings to visit his patients. He's been a practicing veterinarian for about 35 years, and he's been in the Helena area since 1983. A decade ago, he began taking long weekends to fly out of state for training in the various disciplines, and that work now takes up about 90 percent of his operation.

He leaned against his kitchen counter one afternoon and explained his work. He's a calm, thoughtful man, and that translates directly to his practice -- a 1,200-pound horse won't avail itself to treatment if it doesn't want to.

"I explain to them what I'm going to do by how I approach them, how I touch them," Erickson said. "Their survival is built on their ability to read body language.

"They don't really deal with past or future ... but if you're there (in the present), they know it," he added. "Being focused and present ... and paying attention to communication ... that sets you up so you can do the work."

Much of his training involves lessons derived from practitioners who work on humans, and the fundamental systems -- how the skeleton and soft tissues like muscles, ligaments and tendons work together and interact with the patient's brain through the nervous system -- work the same ways on people, horses, dogs and other animals.

There are anatomical differences, but the brain talks to the body through electrical messages sent via the nerves, and when those messages are impeded, a domino effect comes into play.

Erickson largely deals with range-of-movement issues, though some of his treatments can have positive effects on the animals' organs. He's focused on freeing restrictions, clearing pathways and allowing the body's parts to move together properly.

"What you're doing is correcting an imbalance," he said.

"A lot of the things I do are based on reflexes," Erickson continued. "Animals will naturally move in a pattern if they're pain free. For the most part, they're willing to go back to that motion if I remove those pain points and those restrictions.

"I'm not doing something to them," he added. "I'm facilitating their own self-correction. I'm trying to treat each one as a whole being."

Later that afternoon, he demonstrated some of his techniques on his son's steer-wrestling horse. He watched the animal's gait -- checking the timing and length of stride -- and noticed awkward movements in a front leg.

He went to work, feeling along vertebrae to check for misalignment. He monitored muscles with his fingertips and checked acupressure points -- spots where nerves act as a hub, connecting different body parts and systems.

He identified the problem, but the trouble was located beneath the animal's shoulder blades, where he can't get direct access. It's not an uncommon challenge for him to face, so he began an indirect mode of treatment.

Erickson identified a weak muscle and manipulated it, turning the negative electric charge positive. Placing a hand on another vertebra, Erickson triggered a reflex he knew would cause the animal to drop its head. The work done, he removed his hands and said bystanders would hear a popping sound when the horse raised its head.

The head came up, accompanied by a satisfying "pop." Erickson said the sound told him the pressure in the joint had been relieved.

His business is always a learning experience.

"Before I started doing this, I thought I knew how to evaluate a horse's movement, but I've had to completely relearn it," he said. "And I'm still learning.

Erickson has a lifelong love of horses. A former team roper, the Fairfield native now doesn't find much time to compete. But equine sports are a part of his family life -- his wife's a barrel racer, and his son is competing in rodeos.

With a laugh, he recalled that his wife got him into studying alternative techniques because she wanted him to work on her competitive horses.

A decade later, he's logged more than 600 hours in training. The work is different, he said, and it's enjoyable.

Another perk, he noted, was the comparative lack of midnight emergencies. In 10 years, he's had one chiropractic emergency, a record few large-animal vets can claim, especially in the spring.

He gets most of his business by word of mouth. Most of the time, he can treat a problem in a single visit. About a fifth of his patients require followup treatment.

And most of his patients -- whether they be the pack horse that's slipped on ice, the roping mount that's just not moving right, or the beloved old family dog -- have been to standard veterinarians before they see him.

"It's not a substitute (for regular veterinary care)," he said. "It's part of the picture. I deal with the spectrum of wellness ... it's like a jigsaw puzzle. You've got to have all of the pieces."

A 38-year-old Boulder man pleaded guilty Tuesday to several firearms charges that stemmed from a federal sting operation at a Helena pawn shop.

Great Divide Ski Area kicked off the ski and snowboard season with a surprise opening of the Good Luck Chairlift Sunday afternoon.

Lisa Kunkel Independent Record - Sid Erickson watches the horse’s reaction to his adjustment during a treatment.

Lisa Kunkel Independent Record - Veterinarian Sid Erickson performs a chiropractic adjustment on his son’s rodeo horse. Erickson travels some 40,000 miles each year, from Boise, Idaho, to Billings. He treats 2,500 horses and 500 dogs each year, providing chiropractic care and acupressure.
© Copyright 2021 Helena Independent Record, 2222 Washington St. Helena,MT | Terms of Use | Privacy Policy | Do Not Sell My Info
Powered by BLOX Content Management System from TownNews.com.
You don't have any notifications.