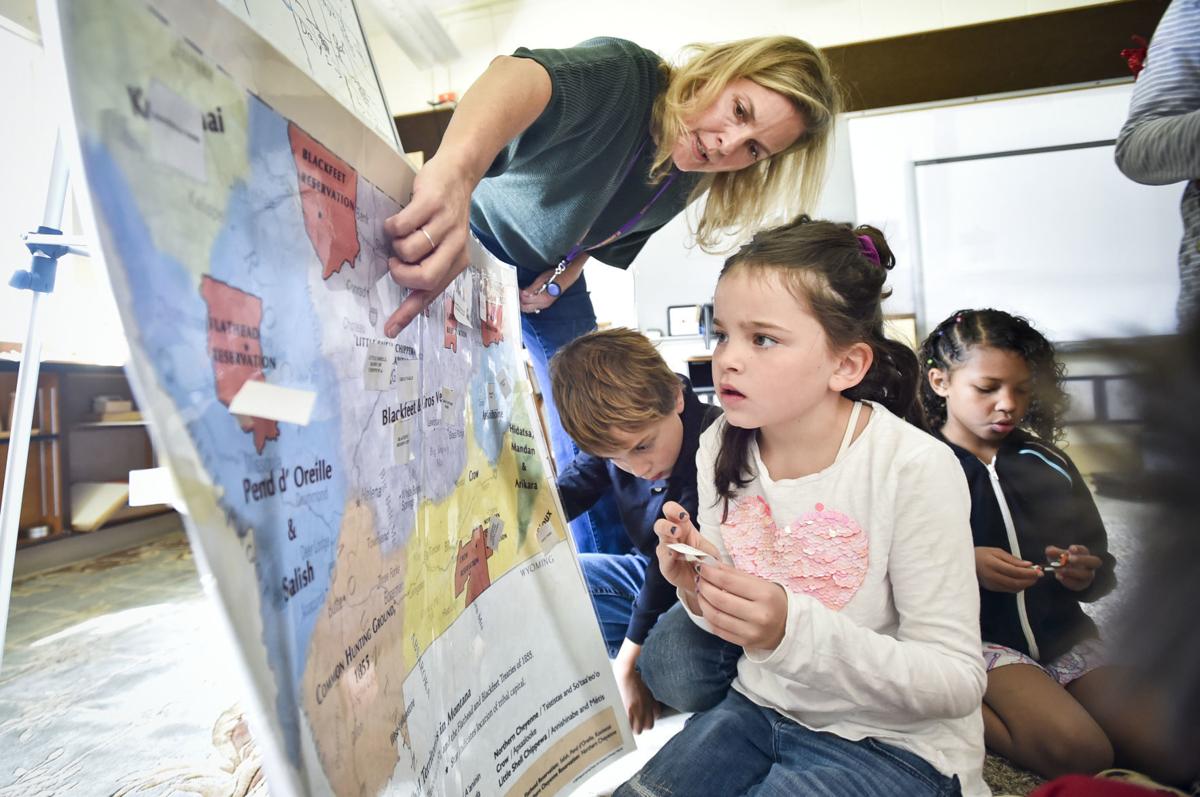 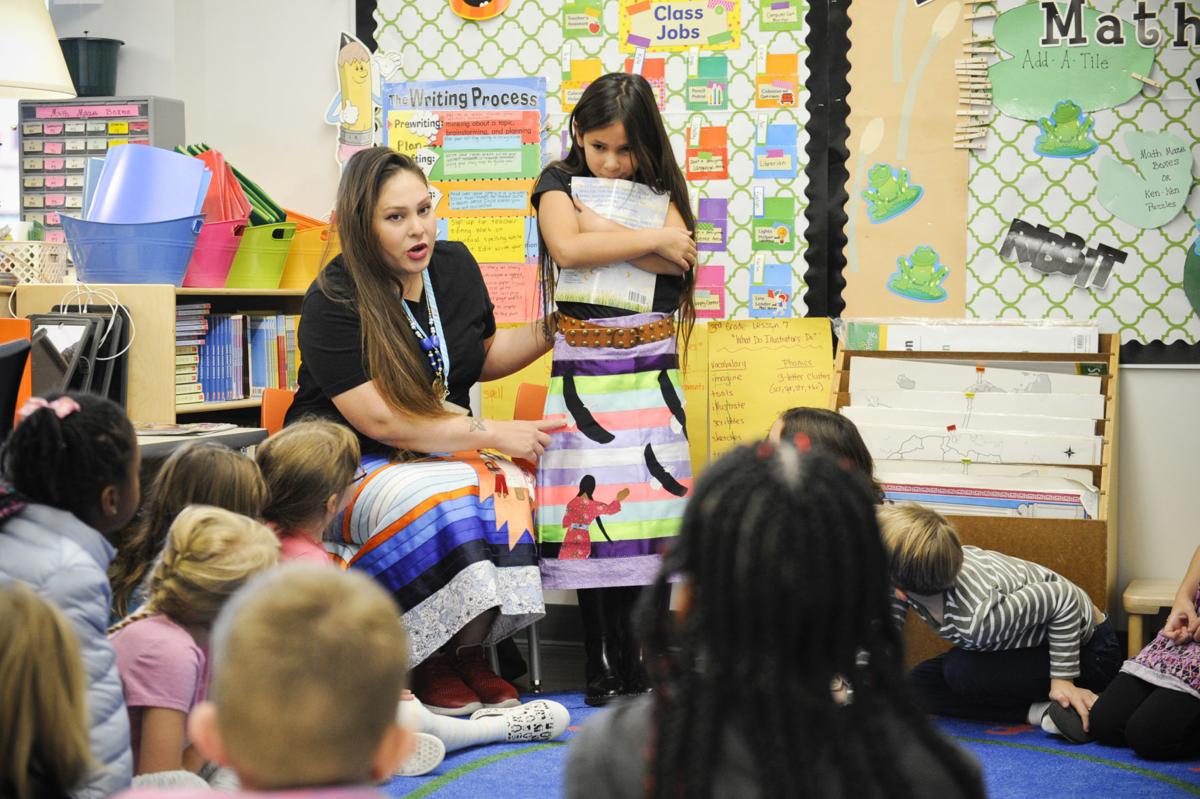 Quincy A. Bjornberg and her daughter Jaylin teach students about their traditional ribbon skirts during a lesson on Indigenous Peoples' Day in Amy Casne-Fetz's Montessori class at Central Elementary School on Monday. 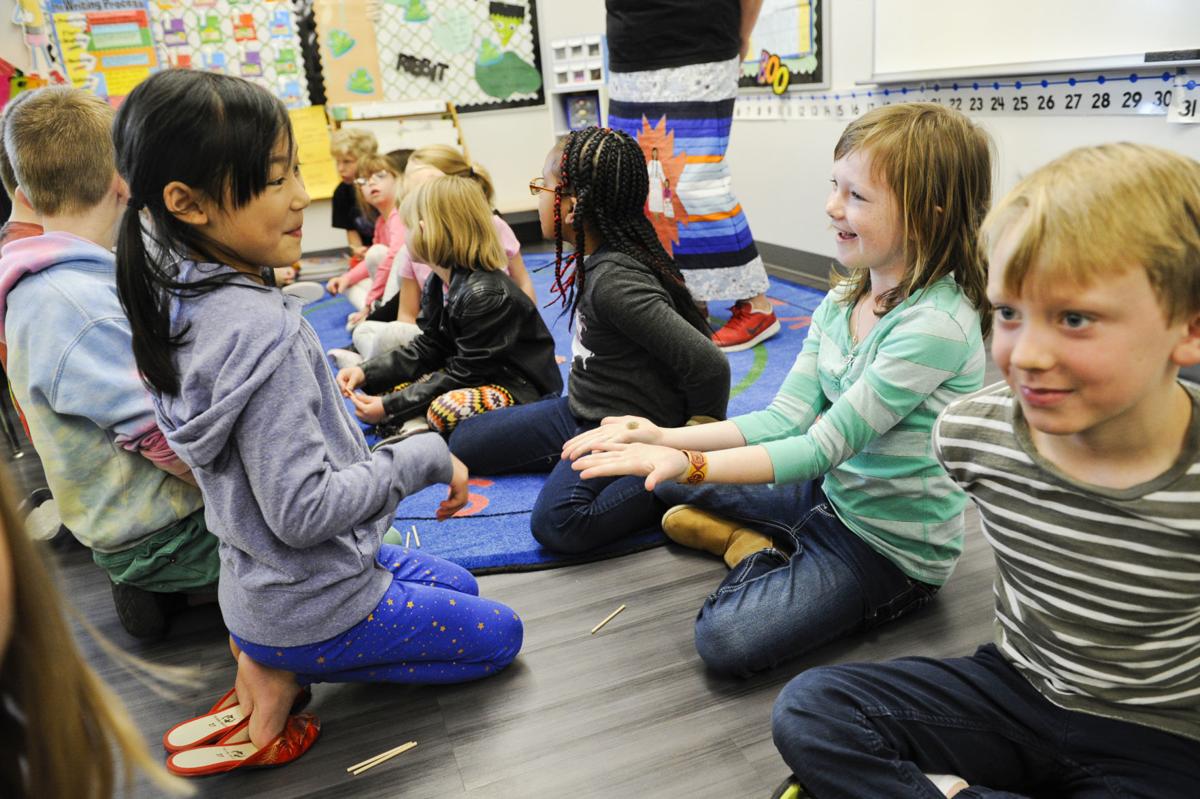 MARGA LINCOLN for the Independent Record

There are now four Montana cities that have done so.

Eight states and more than 130 U.S. communities have taken similar actions, according to a recent New York Times article.

At Central Elementary School, Amy Casne-Fetz’s Montessori class learned a little about one of their classmates -- Jaylin and her mother, Quincy A. Bjornberg -- who both wore traditional ribbon skirts and other tribal regalia.

Bjornberg also shared the sacred Lakota story, “The Legend of the White Buffalo Woman,” from a children’s book by Paul Goble.

It’s the story of a beautiful young woman who brings the sacred pipe and sacred ceremonies to the Lakota and also abundant buffalo herds.

The legend has been passed down for generations, Bjornberg said.

So have games, such as a Little Shell version of rock, paper, scissors or roshambo, which she taught the class to play with small sticks and pebbles.

There are hundreds of games in the Traditional Game Society, Bjornberg told the class.

Some are games of intuition and chance, she said, while others build a physical skill.

“This game teaches you to follow your gut feeling,” she said, “and to never give up.”

She also told the students that Christopher Columbus didn’t discover America; he was just one of the early European explorers in the Americas. America was already occupied by millions of people at that time.

“We’re going to learn about native peoples of Montana,” Wright explained to her class, pointing to a map showing historical tribal territories and the much smaller reservations the tribes now live on, following treaties with the U.S. government.

On Monday, students were just beginning to learn which tribes live in different areas of the state, the names and locations of the different reservations and tribal names American Indians use to refer to themselves.

One of the things Wright wants the students to learn, she said, is “there are no stereotypical Indians.”

As the students dig deeper into the topic, Wright will be inviting in members of tribes to talk to the students about their tribal history and life.

For second grader Dezmond Ross, who is Assiniboine, this class was an opportunity to learn something new.

“Sometimes I go to Wolf Point where my grandma and grandpa live,” he said.

But on Monday, he was learning about the Flathead Reservation and the tribes that live there.

“I’ve not learned about this before,” said third grader Evee Egebrecht, who was learning about the Assiniboine Tribe.

“I want to research it and see what they eat and what they do for fun,” she said.

“Just having a more inclusive look at our history instead of the old school narrative that Columbus discovered this land” is important, he said.

Jetty called Monday, “not so much of a celebration, it’s more of a commemoration. It started a whole chain of events that impacted indigenous peoples who are still feeling the effects of colonialism and all of that historical trauma.”

“I think having a more inclusive story of Columbus and what he actually did, instead of historic myths -- I think needs to be out there.”

One of Jetty’s favorite sayings is, “Who discovered who in 1492?”

She regrets, however, that much of the nation still celebrates Columbus Day, saying “Wherever Columbus traveled, there was destruction. I don’t think Columbus Day should even be recognized ... as a state and federal holiday. It’s kind of ridiculous for all the damage he’s done to many peoples.”

Charles Walking Child, her husband and vice-chairman of the Indian Education Title VI Committee, added that he would like to see a special national day recognizing American Indians for the kindness they offered to the first settlers and explorers -- feeding them, sharing knowledge with them and even teaching them how to grow corn.

The Helena Police Department is asking the public to help locate a missing girl.

Quincy A. Bjornberg and her daughter Jaylin teach students about their traditional ribbon skirts during a lesson on Indigenous Peoples' Day in Amy Casne-Fetz's Montessori class at Central Elementary School on Monday.