Nuggets from Helena: A retrospective on Montana's Mann Gulch fire
0 comments
Share this
{{featured_button_text}}
1 of 4 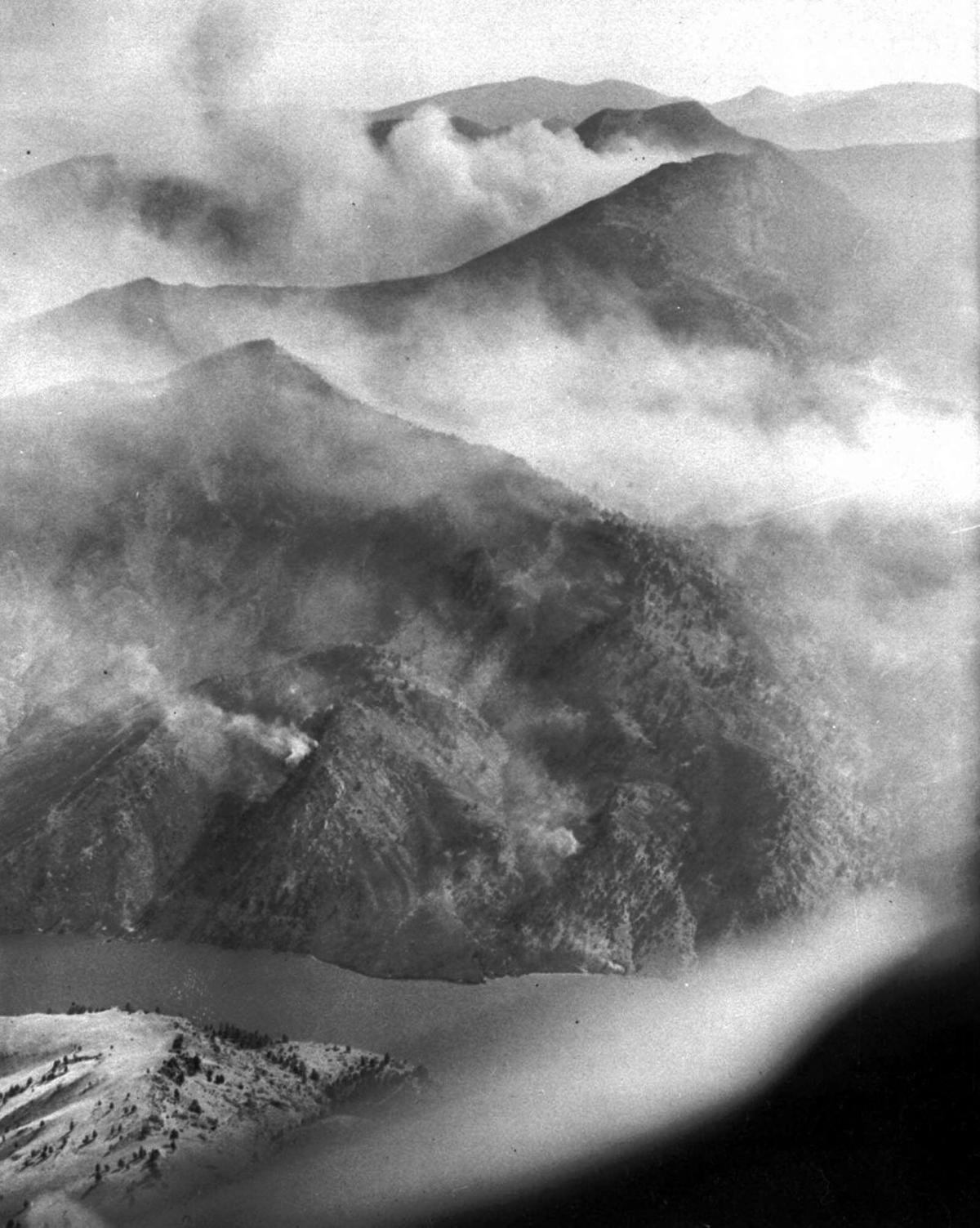 An August 1949 photo shows the scope of the Mann Gulch fire near Helena, which took the lives of 12 smokejumpers and a forest ranger when a wall of flame raced up a steep hillside. The lightning-caused blaze burned more than 3,000 acres and controlling it required the efforts of more than 400 firefighters. 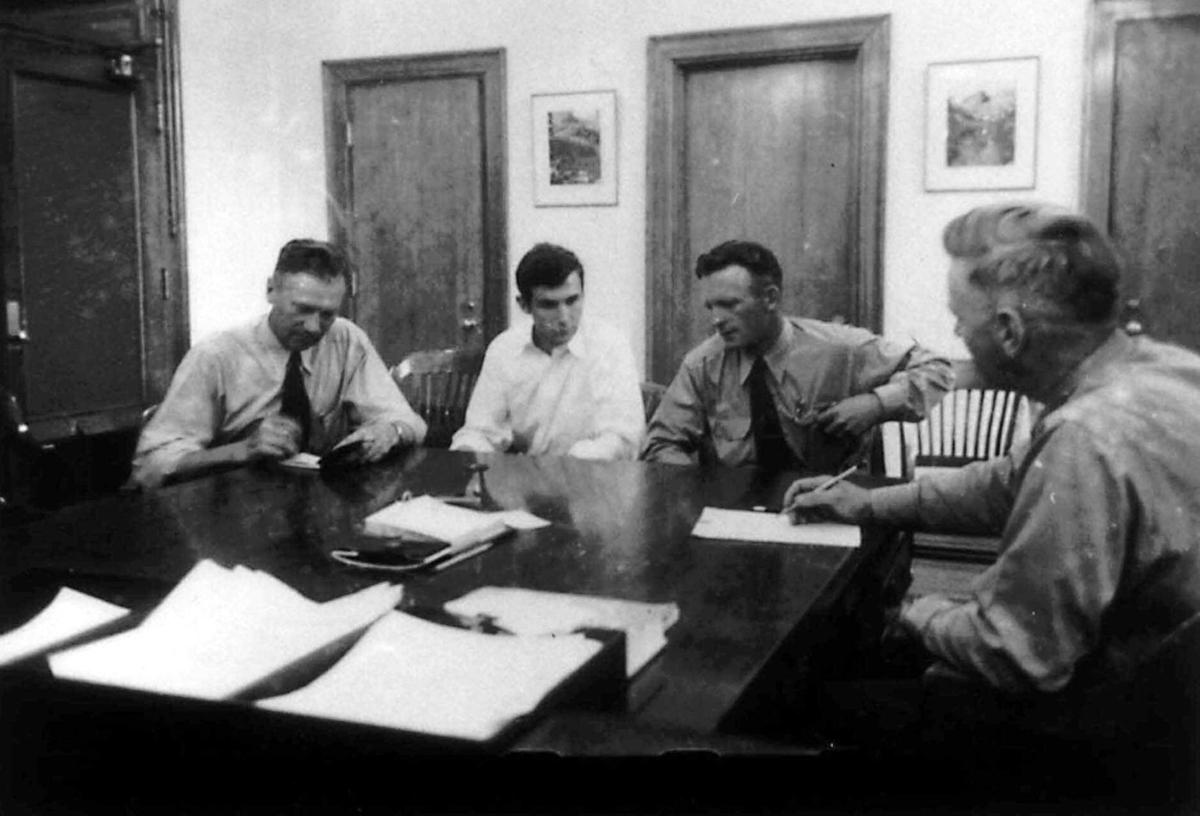 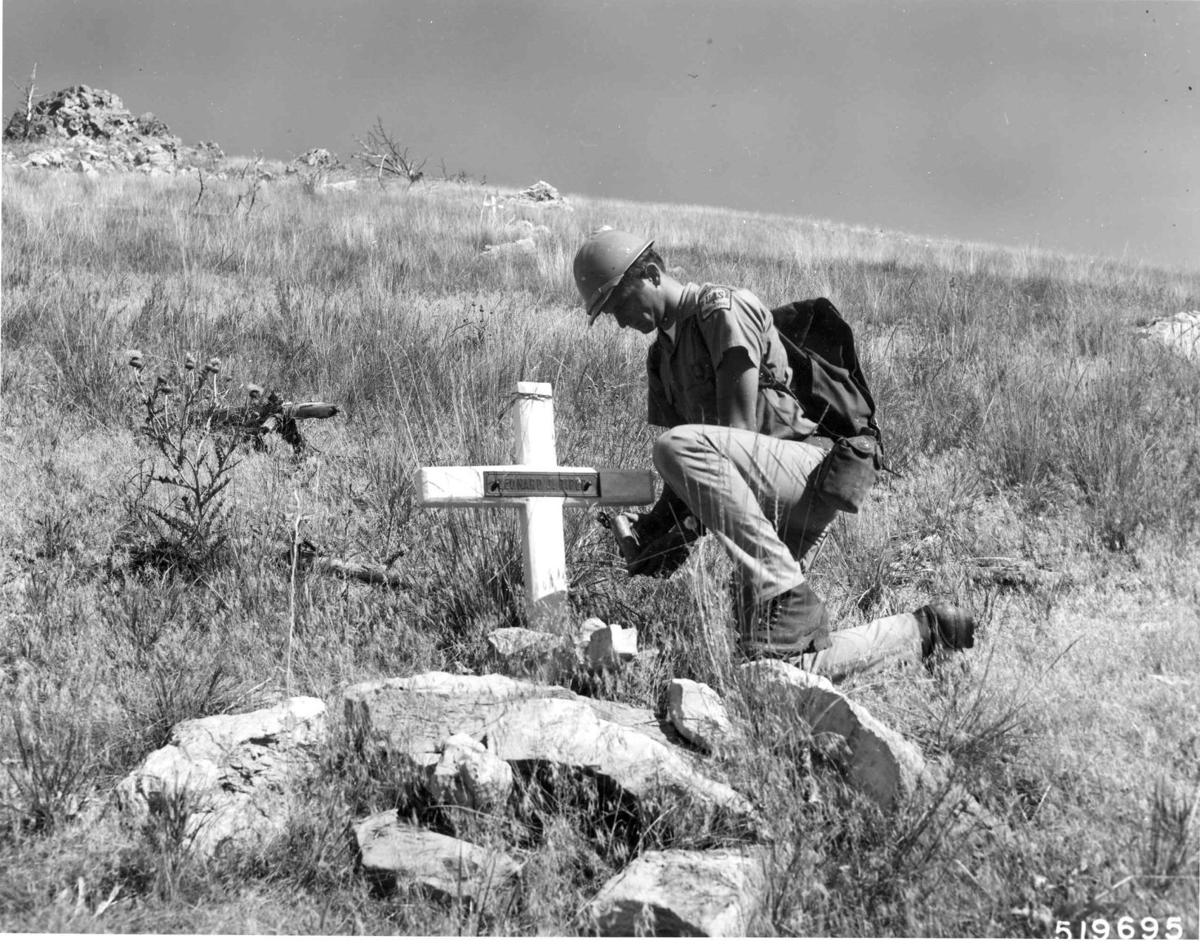 Fred Patten, Recreation Guard at Meriwether Campground, inspects the remains of a flashlight used in the Mann Gulch fire of 1949. The cross next to him marks the spot where Leonard J. Piper, a smokejumper, lost his life in the fire. 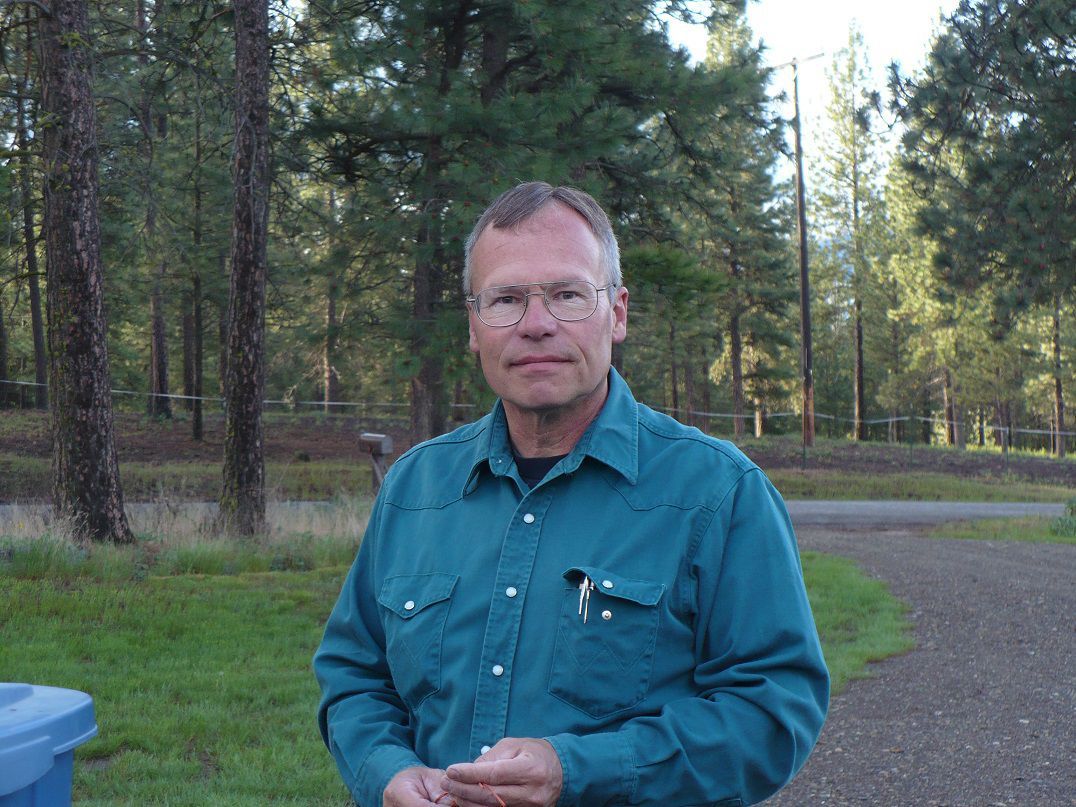 Most historians might argue that we have a duty to remember the sacrifice, determination and courage of those who undertook particularly daring, potentially dangerous and unusually heroic acts for which a high price was often paid. This summer two anniversaries of particular note come into juxtaposition.

This June 6 marked the 75th anniversary of the D-Day invasion of German occupied France, which began a long fight across Europe by allied armies to Berlin and the end of World War II.

Aug. 5 marked the 70th anniversary of an event, smaller in scope, but no less significant to those involved, to their families, friends and a fledgling community of smoke jumpers and wild land fire fighter co-workers.

The Mann Gulch fire north of Helena was caused by lightning strikes near the top of the ridge high above the mouth of the gulch at the Missouri River. By 2:30 p.m. on that day, 16 smokejumpers had left Missoula’s Hale Field aboard a Johnson’s Flying Service C-47 aircraft headed for the fire.

By 4:10 p.m., 15 of the smokejumpers were on the ground in Mann Gulch. One jumper returned to Missoula with the plane, ill from the turbulence of the flight. About 5 p.m. the crew was headed from the drop point to attack the fire from below with the river at their backs in case they needed to retreat to safety. The crew foreman crossed the gulch to meet the local fire guard who had hiked up from his patrol cabin on the river. Together they rejoined the crew about 5:40 p.m.

Minutes later the foreman saw that the fire had jumped the gulch, cutting off the crew’s access to the river. The flames had started to spread up the gulch toward them. The foreman turned the crew and led them at an angle up-slope toward the ridge and away from the fire. The winds increased and drove the fire rapidly toward them in the high grass and brush. The fire had “blown up.” The steep slope, smoke, and high temperature slowed the men in their race to escape the flames. They dropped their tools and fire packs in an attempt to speed up and stay ahead of the fire. The flames reportedly reached up to 50 feet in height and were traveling up the slope 50 yards every 10 seconds.

Two hundred yards after dropping their gear, the foreman realized that they were going to be overrun by flames. He lit an “escape fire” in the grass and told the men to lie down in the ashes to survive the rapidly approaching wildfire inferno. Independently, two men followed the edge of the “escape fire” to the ridge top and the rocks. None of the rest of the crew followed the foreman into the safety of the ashes of the “escape fire” and all were overrun by the flames. Only the smokejumper crew foreman and the two smokejumpers who reached the rocky ridge area survived.

The crew foreman’s actions in setting an “escape fire,” which no one had attempted before, proved a lifesaving innovation for him. No one knows why the crew did not follow his directions, or if they even heard them. They kept running for the rocky ridge where it could be assumed the fire would probably quiet and slow down.

The Mann Gulch fire was estimated at 60 acres when the smokejumpers arrived, and at 3,000 acres after the “blow up” when the firefighters were overrun. It was 5,000 acres when finally contained. The cause of the “blow up” was a collision of circumstances including fine flashy fuels such as tall cured grass, low moisture content of the fuels due to late season drying and curing, local topography causing air currents along the Missouri River breaks and regionally long-term hot and dry weather and winds. The cause of the fatalities is less clear. If the crew had followed the foreman into the burned area created by his “escape fire,” perhaps all would have survived.

From the Mann Gulch Fire incident, lessons were learned about fire fighter safety, the importance of communications and leadership, and fire behavior. The Forest Service began to think more strongly about developing national fire research laboratories, which eventually were established at several locations including one at Missoula.

The value of fire to the overall health of the forest and the question as to whether all wildfires should be attacked aggressively, with all available resources, in all situations and all locations was not to be addressed until many years later.

The same C-47 aircraft that dropped the smokejumpers on the Mann Gulch Fire in 1949 had seen service during World War II. It came into service in 1944, but too late to participate in the actual D-Day invasion.

The C-47 is the military version of the civilian DC-3 plane which was designed in 1935 and became one of the first truly reliable and efficient passenger aircraft. Over 10,000 DC-3/C-47s were produced in this country.

General Dwight Eisenhower, the commander of Allied forces during the invasion of Europe, was credited with the statement, “most vital to our success in Africa and Europe has been the Jeep, the two and a half ton truck and the C-47. “

The Mann Gulch plane was rediscovered and brought back to the Museum of Mountain Flying in Missoula in 2001 where it has been on display. Our “Miss Montana” was restored over the past year at the Museum of Mountain Flying and participated in the 75th anniversary fly-over and paratroop drop reenactment in Normandy, France in June of this year. It was one of only a handful of other C-47 aircraft still flying and available for the event. It was also restored to reflect and honor a portion of the history of civilian aviation in Montana and throughout the west. A second plane, a DC-3 civilian version of the plane, has recently been acquired by the Museum of Mountain Flying. Both planes will continue to be housed at the museum for visitors to experience.

In May of this year I happened to be standing in the horse pasture when the restored C-47 now known as “Miss Montana” flew directly over my head, with perhaps only 300 or 400 feet separating us. The rumble and the roar of the two radial piston driven engines can actually be felt as well as heard, and I could imagine the effect the sound a whole squadron would have.

This plane was on a training flight from its home at the Museum of Mountain Flying in Missoula prior to leaving for Normandy for the D-Day Celebration. It carried parachutists for a practice jump. It made five or six circles over the valley before dropping a “stick” of jumpers over a local rancher’s field. The thrill of participation in the event was as strong in the adults and children who lined local roads and the school grounds to watch the plane fly over and drop the jumpers, as it was in the pilot, aircrew, and parachutists. The parachutists commented that they could hear the school children cheering as they drifted down to a hay field near the school.

We honor people and events by remembering and passing on their stories. Our shared memories connect us. We commemorate them at anniversary remembrances. We learn about them by visiting a specific place or physical memorial to the people or events. We honor them by recording, documenting and interpreting in studies, literature, in signs and markers and displays. We preserve them by official designation as a part of the National Register of Historic Places as was done for the Mann Gulch fire area in 1999. We preserve significant artifacts that they can be touchstones to the past.

Marc Childress retired from the U.S. Forest Service in 2008 after a 37-year career on five different national forests in Montana, Wyoming and Idaho. He started working for the Forest Service in 1969 as a seasonal fire lookout and smoke chaser on the Lolo National Forest.

Best of the Nuggets: A few of our favorite columns on Helena-area history

The men on the Mann Gulch fire

DEER LODGE — Sixty years ago, a couple of nice-looking brown trout changed David Thomas’ vacation plans a bit. Then a detour and a boulder in … 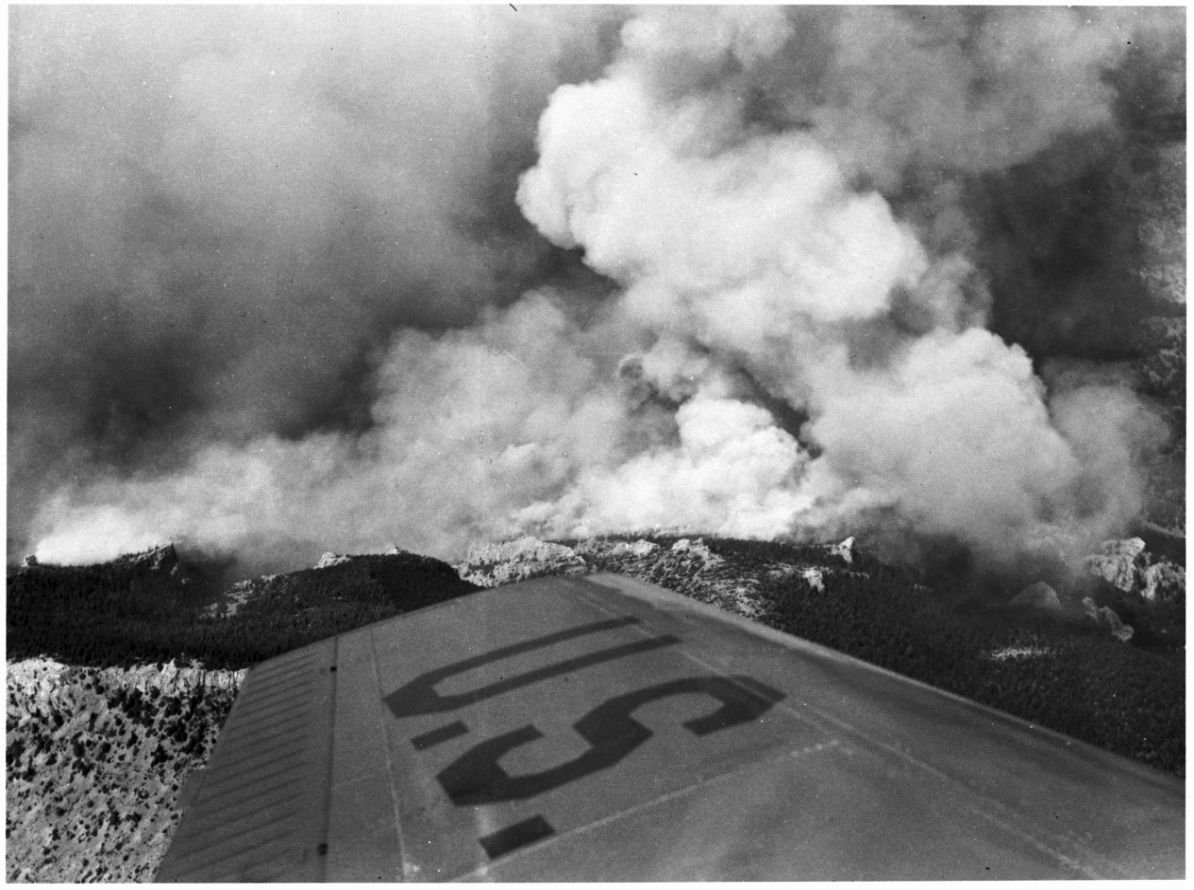 The Mann Gulch fire can be seen from a U.S. Forest Service plane in August 1949. 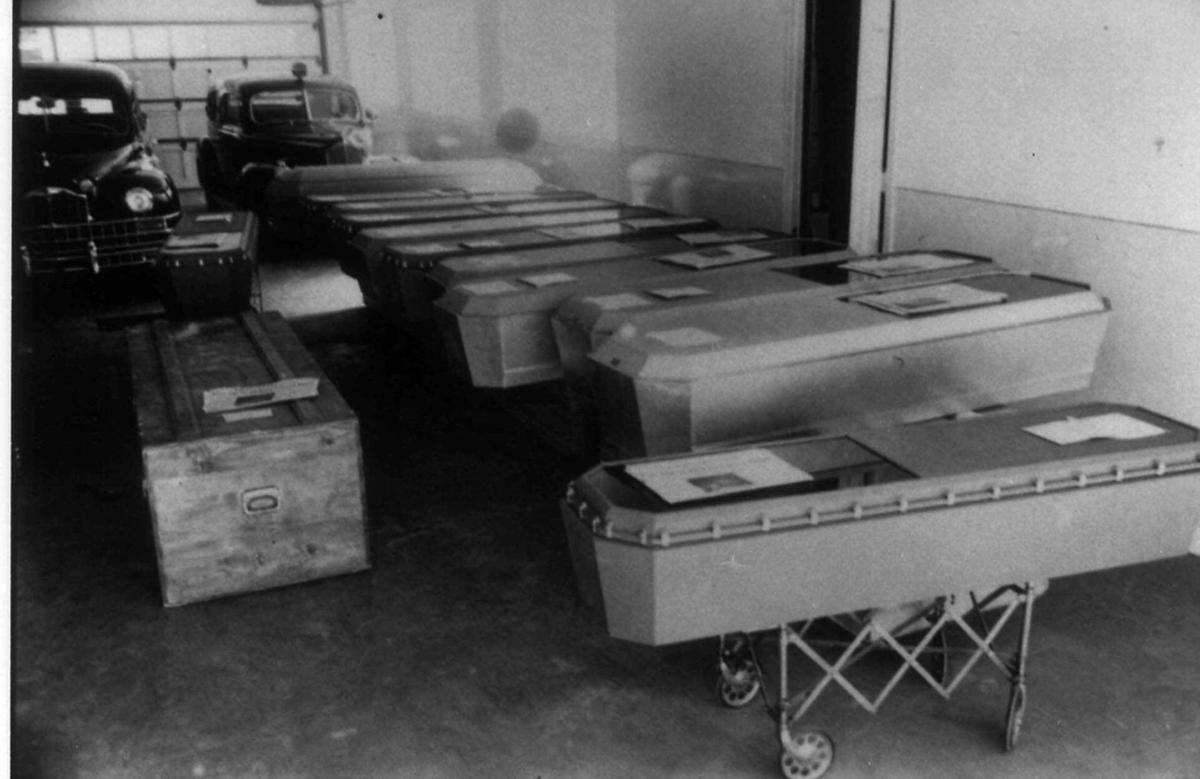 An August 1949 photo shows the scope of the Mann Gulch fire near Helena, which took the lives of 12 smokejumpers and a forest ranger when a wall of flame raced up a steep hillside. The lightning-caused blaze burned more than 3,000 acres and controlling it required the efforts of more than 400 firefighters.

Fred Patten, Recreation Guard at Meriwether Campground, inspects the remains of a flashlight used in the Mann Gulch fire of 1949. The cross next to him marks the spot where Leonard J. Piper, a smokejumper, lost his life in the fire.