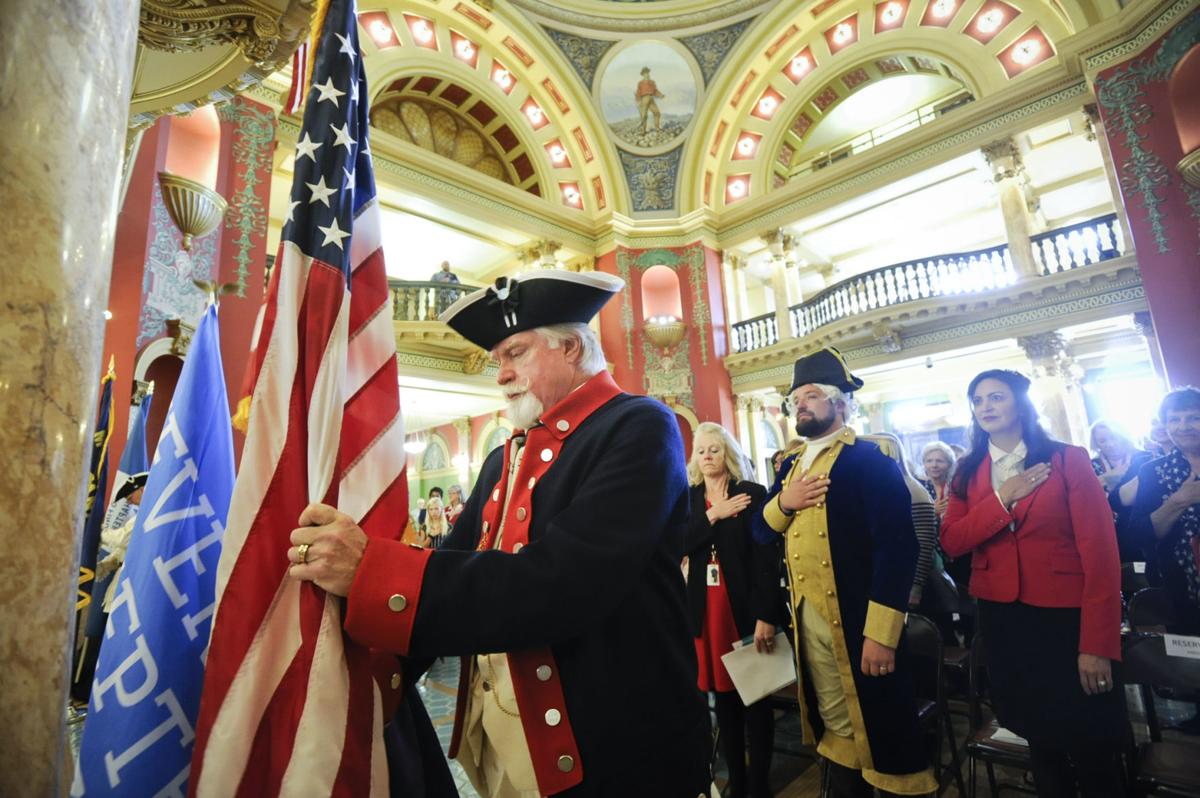 Warren Dupuis, Sons of the American Revolution Guardian Chapter president, posts the American Flag Tuesday in the Capitol Rotunda for the annual event celebrating the anniversary of the signing of the U.S. Constitution. 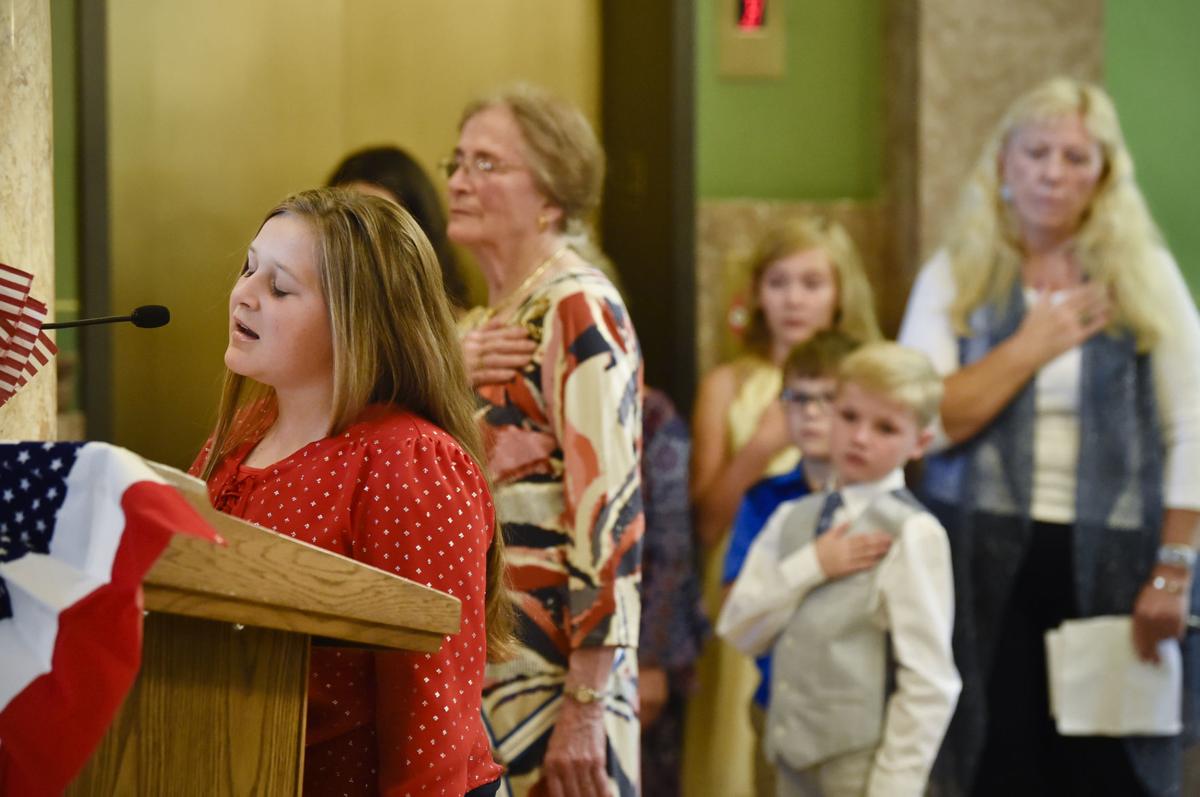 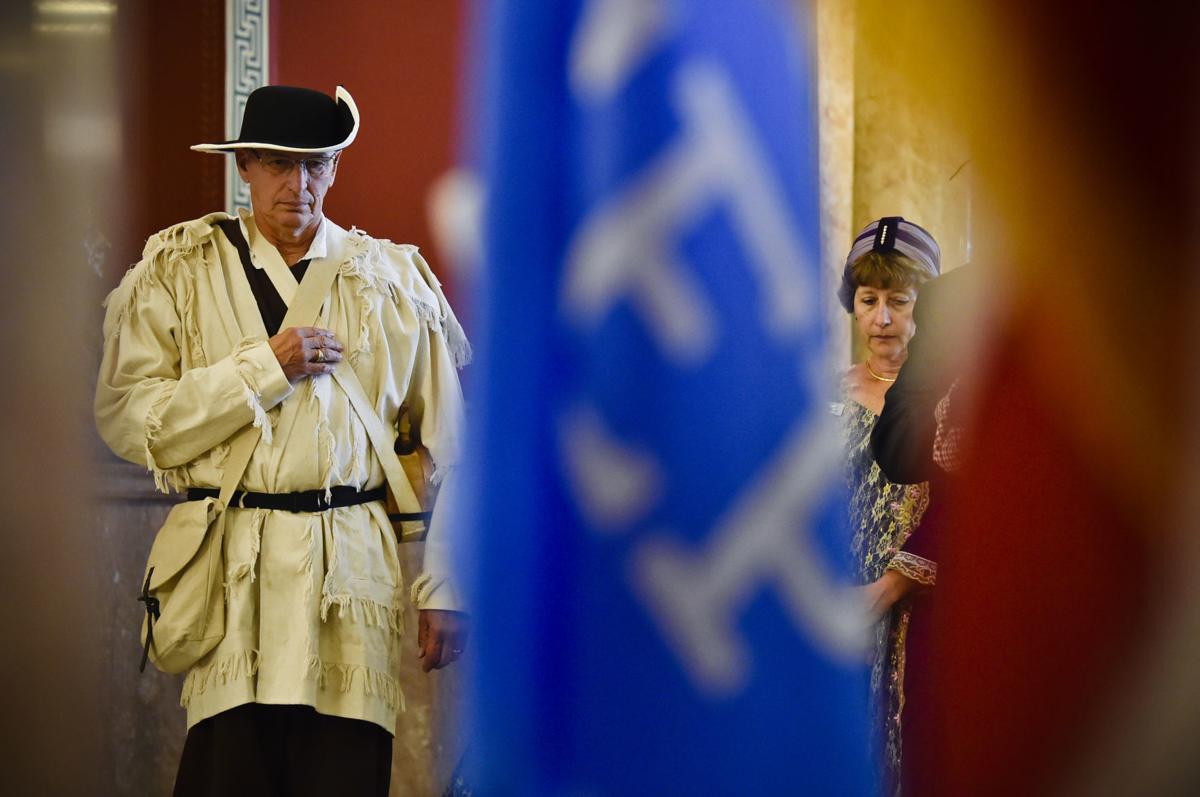 Attendees hang their heads during the invocation Tuesday. 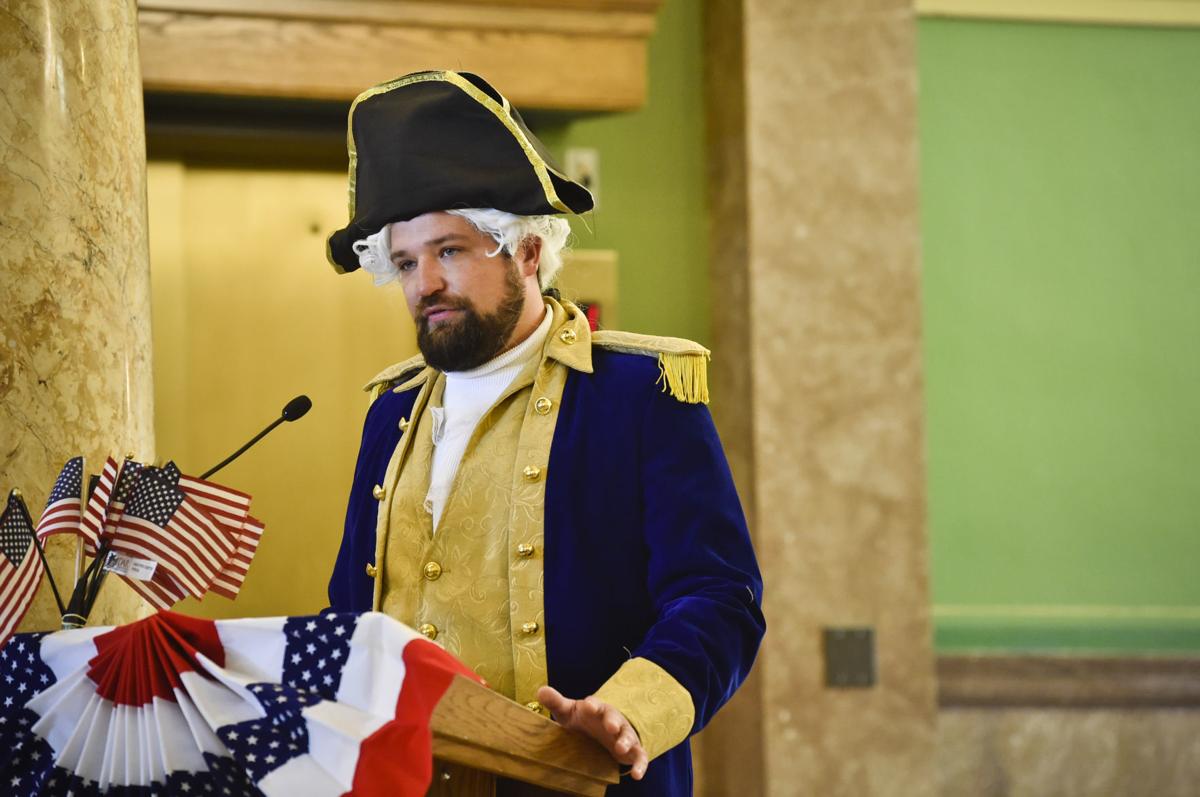 Tyler Campbell, dressed as George Washington, delivers a message from the governor Tuesday at the Constitution Day celebration. 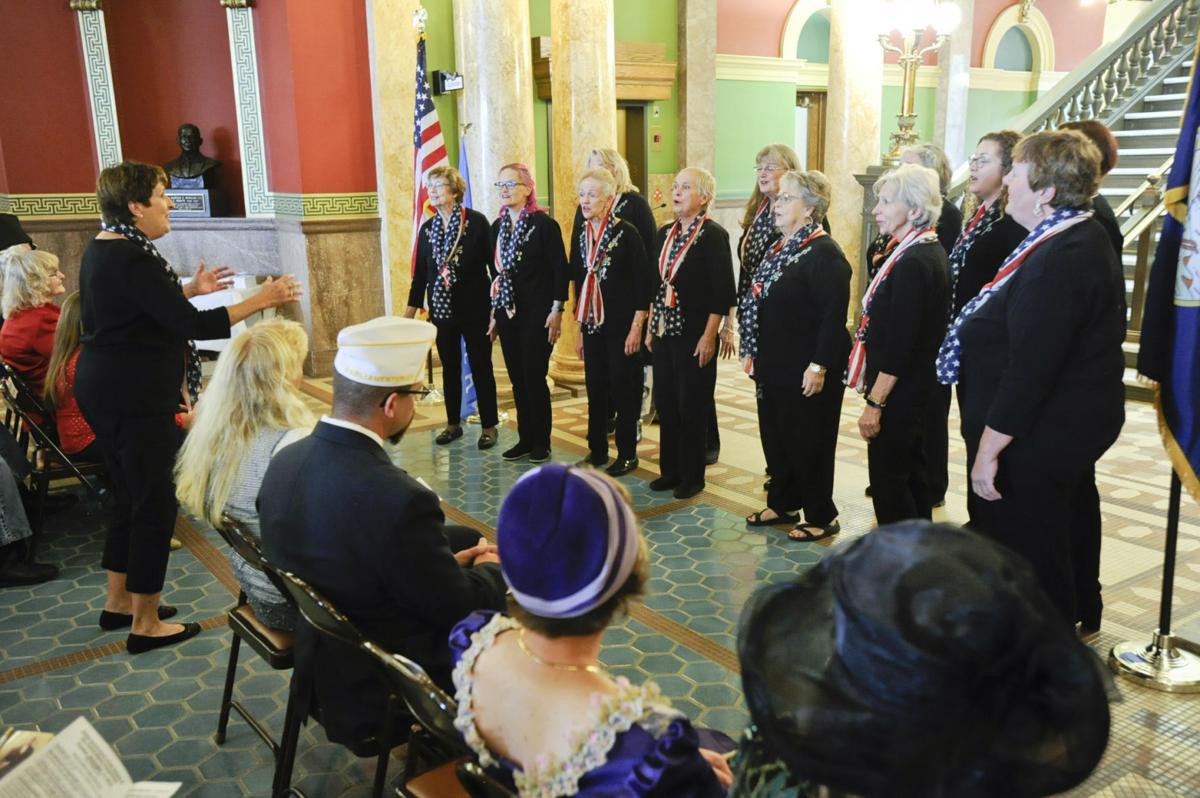 The Helena Xpress Singers, directed by Barb Leland, sing "This is My Country" during Tuesday's Constitution Day celebration. 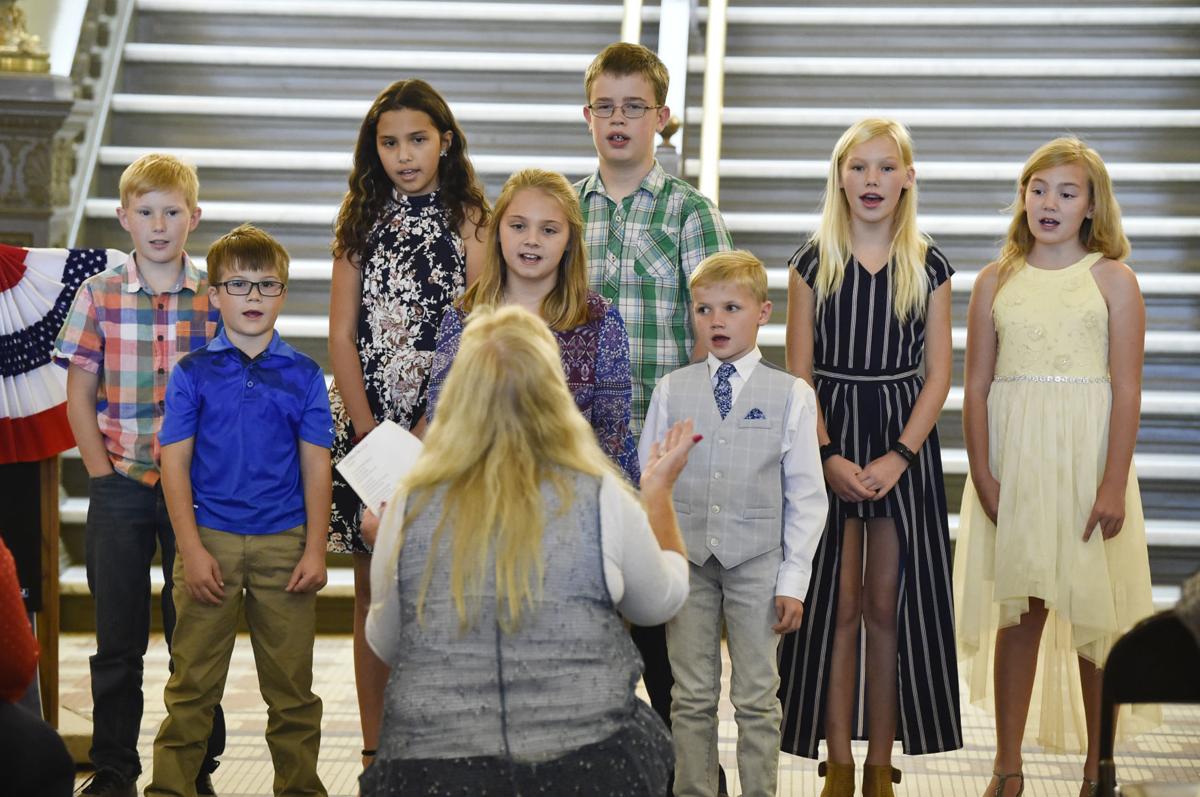 Around 100 people gathered in the Capitol Rotunda Tuesday afternoon to celebrate the 232nd anniversary of the signing of the United States Constitution.

With Helena's Daughters of the American Revolution coordinating the event, color bearers dressed in Revolutionary War garb posted the United States flag at the beginning of the ceremony.

Warren Dupuis, the president of the Guardian Chapter of the Sons of the American Revolution, presented a history of the Constitution, calling it an "artfully crafted document" built through the spirit of compromise.

"George Washington was the first to sign it," Dupuis said, and he described how after the 1787 Constitutional Convention, states and people battled over how the country would be created to form a more perfect union.

"The three most important words in the Constitution are 'We the people,'" Dupuis said.

Deputy Secretary of State Christi Jacobsen reflected on what the Constitution means to her personally, calling it a "God-inspired document." She said she believes the Constitution "has never been more challenged" by globalization and social media, and added that English was the "founding language" of the United States and that immigrants are welcome here if the follow "proper" channels and do not try to "change it."

"The Bible and the Constitution are the most important documents of our day," Jacobsen said.

Gov. Steve Bullock shared a statement on the Constitution through his citizens' advocate Tyler Campbell, who came dressed in full George Washington regalia.

"We gather to honor the perseverance and wisdom of the founding fathers who worked so diligently to draft the Constitution and establish the original framework of the American Republic," Bullock wrote. "It will continue to be our moral compass as we sail into the uncharted waters of the future."

Jane Lee Hamman, the Daughters of the American Revolutions's Constitution Week chairwoman, said celebrating the Constitution was an important part of keeping its history alive.

"We perpetuate the history of all those who created our independence," Hamman said.

"Their spirit is what we try to convey."

“Deputy Secretary of State Christi Jacobsen reflected on what the Constitution means to her personally, calling it a ‘God-inspired document.”

What a load of nonsense. She is, quite obviously, ignorant of history. The Founders were inspired by the philosophers of the Age of Enlightenment who wrote about wresting power from the royalty and religion and giving to the people, which is what the Constitution did.

"The Bible and the Constitution are the most important documents of our day," Jacobsen said.

Really? A 2,000-year old book of sheepherder mythology that condoned human slavery? No thanks. It's the 21st-century and more than time to leave your primitive superstitions behind.

clay... an existential threat to our republic? We know how much he loves socialism. I bet he would love to trash the Constitution and have the democrats write a new socialist form of government.

John Willians, defender of pedophile priests and supporter of theocracy ahead of our Constitution has spoken.

Hey clay, think I found your comrades. They sound just like you.