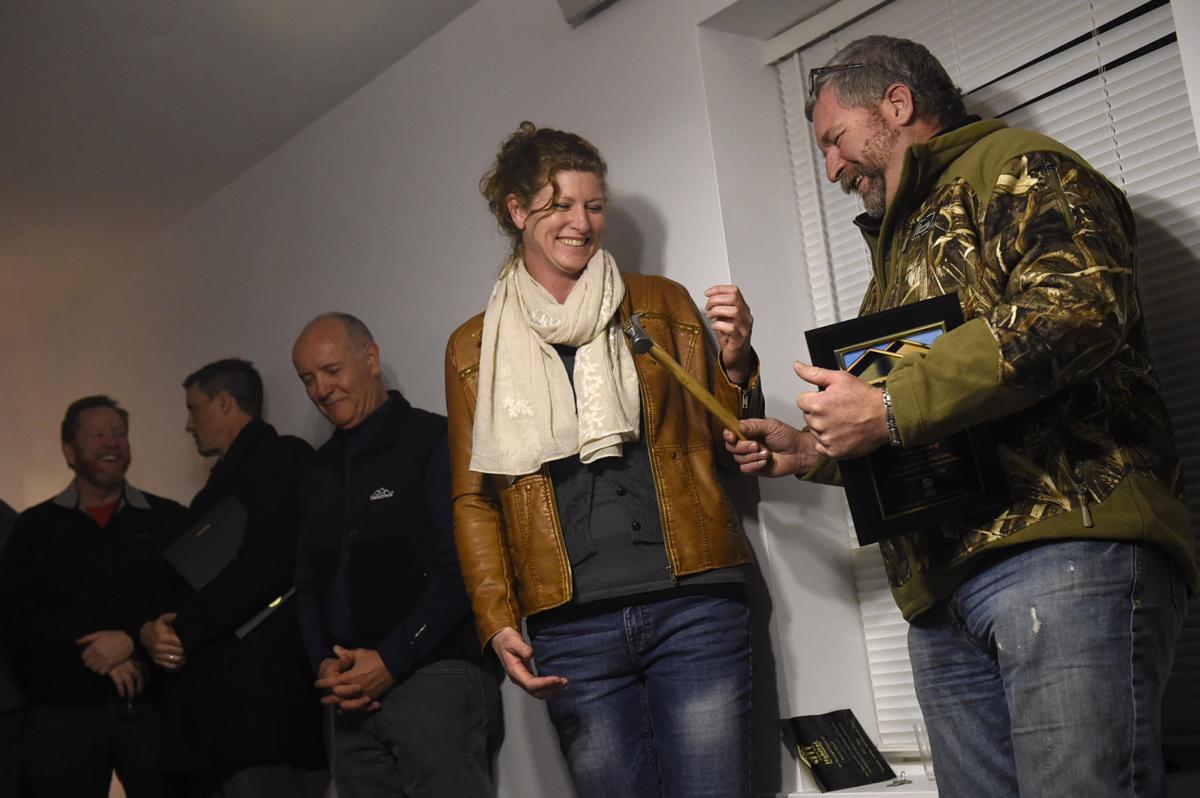 Vice president of Power Townsend Kevin Wall, right, hands Kelley Moody a hammer Monday evening during the dedication of Habitat for Humanity's 32nd Helena home. On the corner of Benton and Custer avenues, Moody, along with her son, Sebastian, will live in the home and take on the mortgage payment. 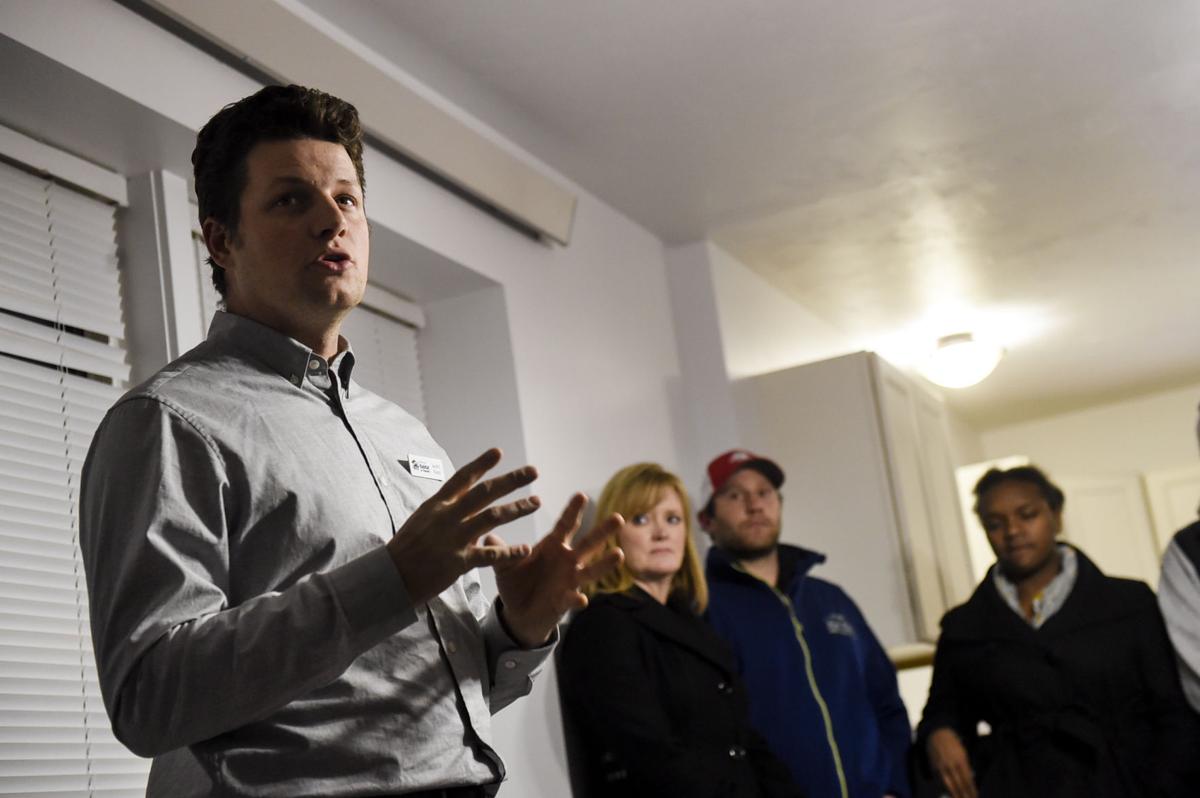 Helena Area Habitat for Humanity Executive Director Jacob Kuntz on Monday night thanks the long list of volunteers who helped build the house for Kelley Moody.

Kelley Moody officially became a homeowner after a Habitat for Humanity dedication on Monday night.

After sharing a studio apartment with her 10-year-old son, Moody was in need of more space and wanted something she could call her own. She started looking for a home to buy, but quickly realized her salary as a Head Start teacher wasn’t enough to qualify for a mortgage through a normal banking process.

Before submitting her application to Habitat for Humanity, Moody had to make sure she met all the criteria. She had a qualifying income, her apartment was overcrowded, and she was more than willing to help build her own home. The nonprofit organization requires all homeowners to put in a certain number of hours building their home, working on another Habitat home, or working in the ReStore home improvement store.

As a single mother, Moody was required to complete 250 hours, but she logged close to 300. She learned how to use a table saw and tackled her fear of heights while nailing down plywood on her roof.

“It’s been an amazing experience,” she said. “I’ve achieved some of my own personal goals.”

After a year and three months of planning and construction, Moody and her son will be moving into their three-bedroom home.

In addition to teaching during the day, Moody takes classes at Helena College and UM-Western to work toward a double major in early childhood education and child psychology. Moody’s been too busy to let home ownership sink in, but she said she’s more than ready to take on the responsibility.

“Although I’ve been working so hard to achieve this goal, it just doesn’t seem real yet,” she said. “It probably won’t seem real until I’m moving my stuff into my room and sitting in my living room.”

Habitat for Humanity sets up homeowners with a mortgage that matches their income, and requires courses in home ownership, maintenance and budgeting. Moody said her new mortgage will be less than what she paid for her studio apartment, and the energy-efficient construction will keep utility costs low.

Moody’s home is the most energy efficient Habitat for Humanity home ever built in the Helena area, Jacob Kuntz, executive director of Helena Area Habitat for Humanity, said. The home was constructed with structural insulated panels, which will keep utility costs between $35 and $45 a month.

“It’s small, it’s decent, it’s affordable,” he said. “It’s going to stand the test of time for Kelley and her family.”

The home was completed in more than 1,600 hours from 420 volunteers, and with financial sponsorship from Power Townsend, Wells Fargo, The Helena Building Industry Association and the Treacy Foundation.

Between donations and a choice of in-stock items from several local stores, Moody was able to pick some of the finishing touches. Her lights and the tile in the bathroom and laundry room came from the ReStore, and she got to pick her kitchen cabinets and bathroom vanity.

“You have a budget that you have to stay within, but it’s not out of reach of what you want,” Moody said. “Who doesn’t love to shop?”

Helena Area Habitat for Humanity is currently accepting applications from potential partner families for its next home. Interested families can call 449-4663 or visit helenahabitat.org to learn how to apply.

Vice president of Power Townsend Kevin Wall, right, hands Kelley Moody a hammer Monday evening during the dedication of Habitat for Humanity's 32nd Helena home. On the corner of Benton and Custer avenues, Moody, along with her son, Sebastian, will live in the home and take on the mortgage payment.

Helena Area Habitat for Humanity Executive Director Jacob Kuntz on Monday night thanks the long list of volunteers who helped build the house for Kelley Moody.