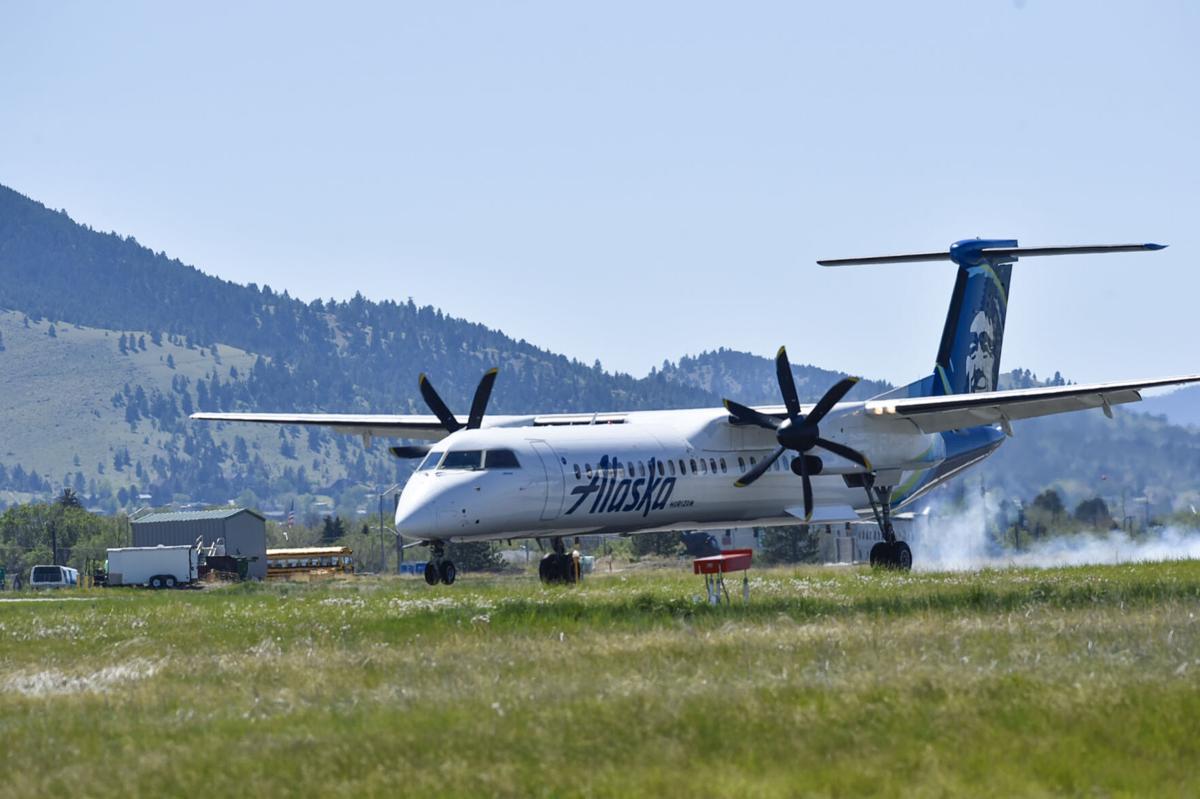 A Horizon Airlines flight from Seattle lands at the Helena Regional Airport on Wednesday. Flights on the primary runway at the airport will be halted from June 6 through June 13. 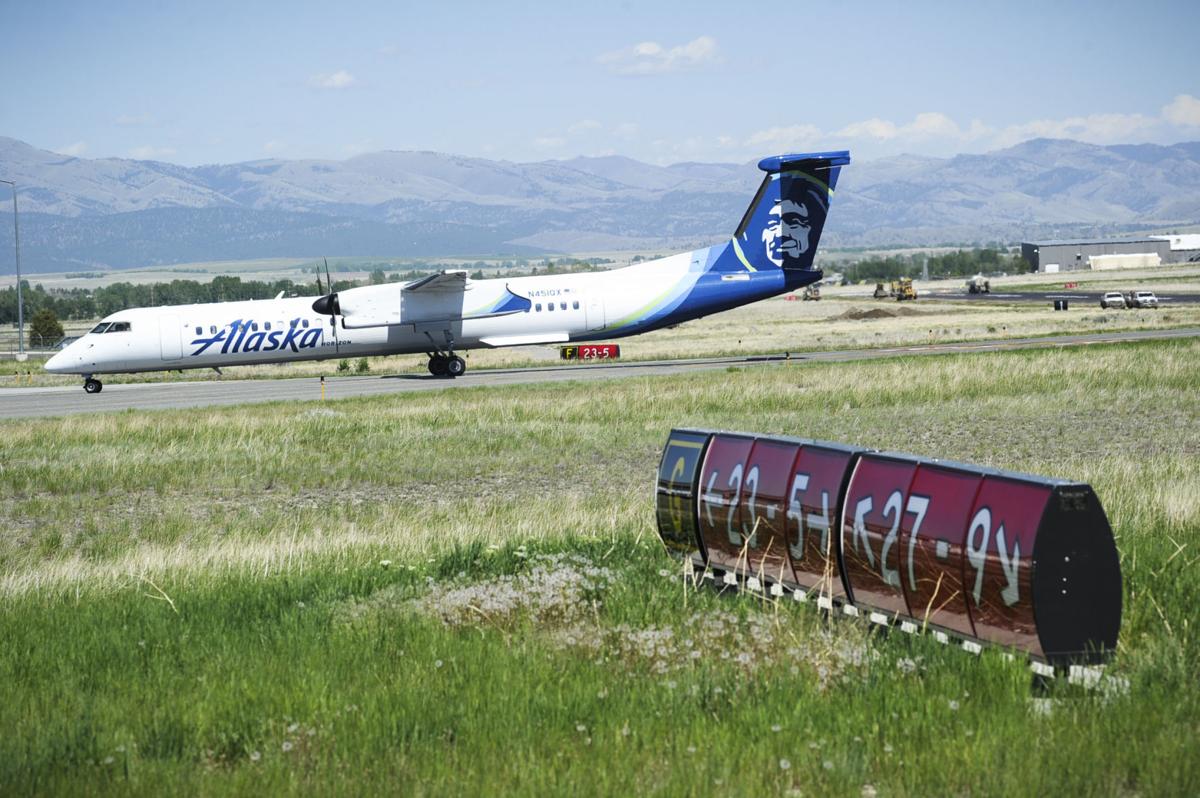 A Horizon Airlines flight from Seattle taxis at the Helena Regional Airport on June 2.

The ongoing Helena Regional Airport runway reconstruction project is poised to enter its third phase, closing down the main runway to all commercial airline flights from Sunday to June 13.

The $10.8 million project, which encompasses all 9,000 feet of the airport's main runway and all of its connecting taxi lanes, began with the easternmost 1,700-foot stretch May 3.

By May 21, a Helena Sand & Gravel crew had moved on to the next 1,000 feet of runway, and work on that stretch is anticipated to wrap up Thursday.

Those first two phases of the project required an entire full-depth reconstruction, replacing everything from the gravel up to the asphalt.

Airport Director Jeff Wadekamper said commercial airline flights have been relegated to using the remaining 6,000 feet or so of the runway since reconstruction began.

"Those pilots are making it look easy," Wadekamper said.

With the third phase of the project focusing on the next about 6,000 feet of runway, commercial flights will be suspended until the phase's completion June 13.

While the remainder of the runway will not require a full-depth reconstruction, Wadekamper said it will take a "Herculean effort" to complete the upcoming phase in eight days.

The remaining asphalt will be milled off, then all 9,000 feet will receive a new coat of asphalt at once to avoid cold joints on the surface, places along the surface where two separate applications of asphalt meet when doing the work piecemeal.

"You get a better product in the end without those cold joints and it will last longer," Wadekamper said.

Helena Sand & Gravel will continue to be the contractor, but the need for more than 7,000 tons of asphalt per day has forced the company to reach out to others for assistance.

Boulder-based Bullock Contracting is also providing trucks to help move everything. In total, Wadekamper said about 50 trucks will be needed to complete the project in the eight-day span.

To provide a better idea of how large the project is, Wadekamper said 6.8 acres of paint will be used on the finished runway.

Before that can happen, the connecting taxi lanes also need to be resurfaced.

"It's one of the most aggressive jobs I've ever seen," Wadekamper said, referring to both its scope and timeline.

Funding of the $10.8 million project is coming entirely from the federal government. The lion's share is covered by the Federal Aviation Administration's Airport Improvement Program, which is funded through taxes collected on all airline tickets, air cargo and aviation fuel. Typically with FAA grants, a small portion of the total project cost needs to be paid for by the airport as a local match.

With the airport's revenue nose-diving in 2020, Wadekamper said the airport authority was unsure if it would be able to come up with the matching obligation. Thanks to the American Rescue Plan Act, the Helena Airport Authority received additional federal funds to cover that cost.

As a result, the airport authority chose to spend its revenue on repaving the secondary runway at the northeast end of the property, which will be completed Friday.

Smaller aircraft will be able to use the two other paved runways and grass runway at the airport. Helena's airport and Bozeman Yellowstone International Airport are the only two of Montana's major airports to have turf runways.

The suspension of commercial airline arrivals and departures coinciding with local events such as the Governor's Cup and high school graduations presents travel problems for out-of-town visitors.

"We'll be doing quite a few transfers from Bozeman to here in the next week," Spreadbury said.

He said he recently hired two drivers in preparation for the typically busy summer months.

Two of the three members of Montana's congressional delegation were in the area on Tuesday, with Democratic Sen. Jon Tester touting his work t…

Student council members made their mark on HHS

Though they differ in many ways, two of Helena High School's best and brightest graduating seniors have long been bound together by the school…

A Horizon Airlines flight from Seattle lands at the Helena Regional Airport on Wednesday. Flights on the primary runway at the airport will be halted from June 6 through June 13.

A Horizon Airlines flight from Seattle taxis at the Helena Regional Airport on June 2. 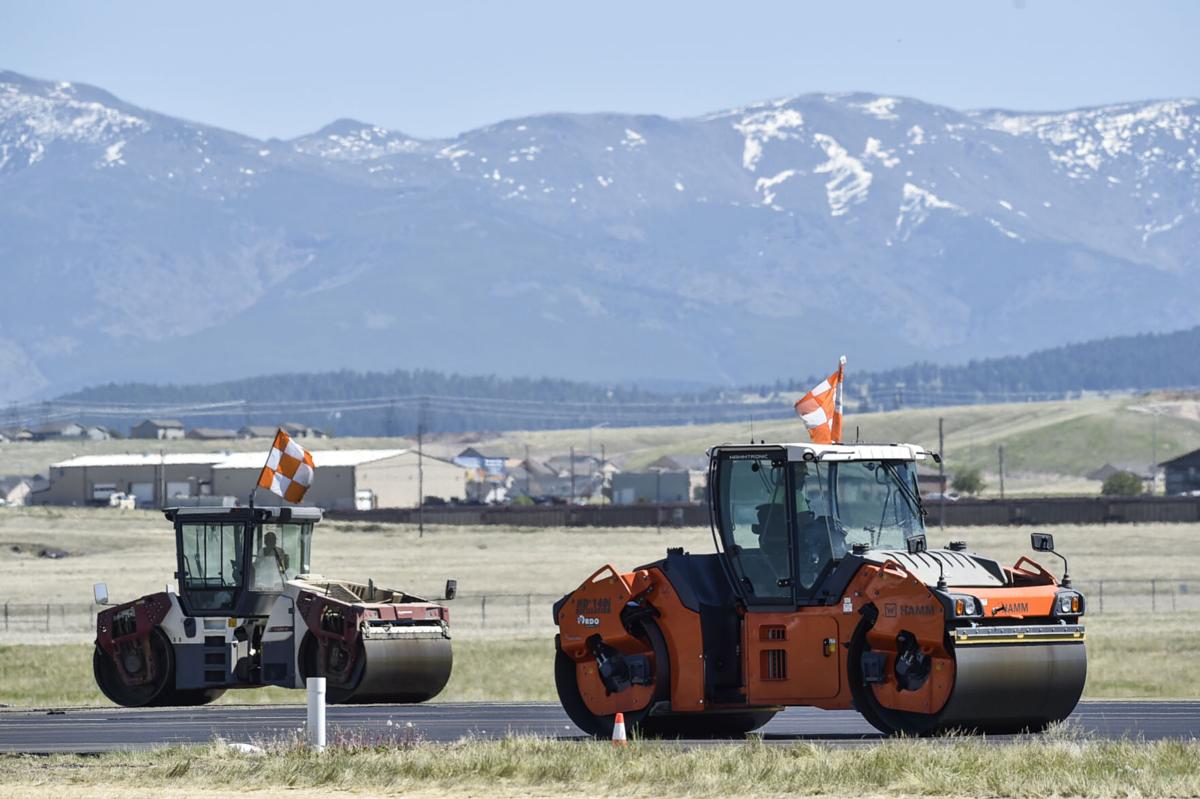 A construction crew works on the runway at the Helena Regional Airport on June 2. Flights on the primary runway at the airport were halted from June 6 through June 13.