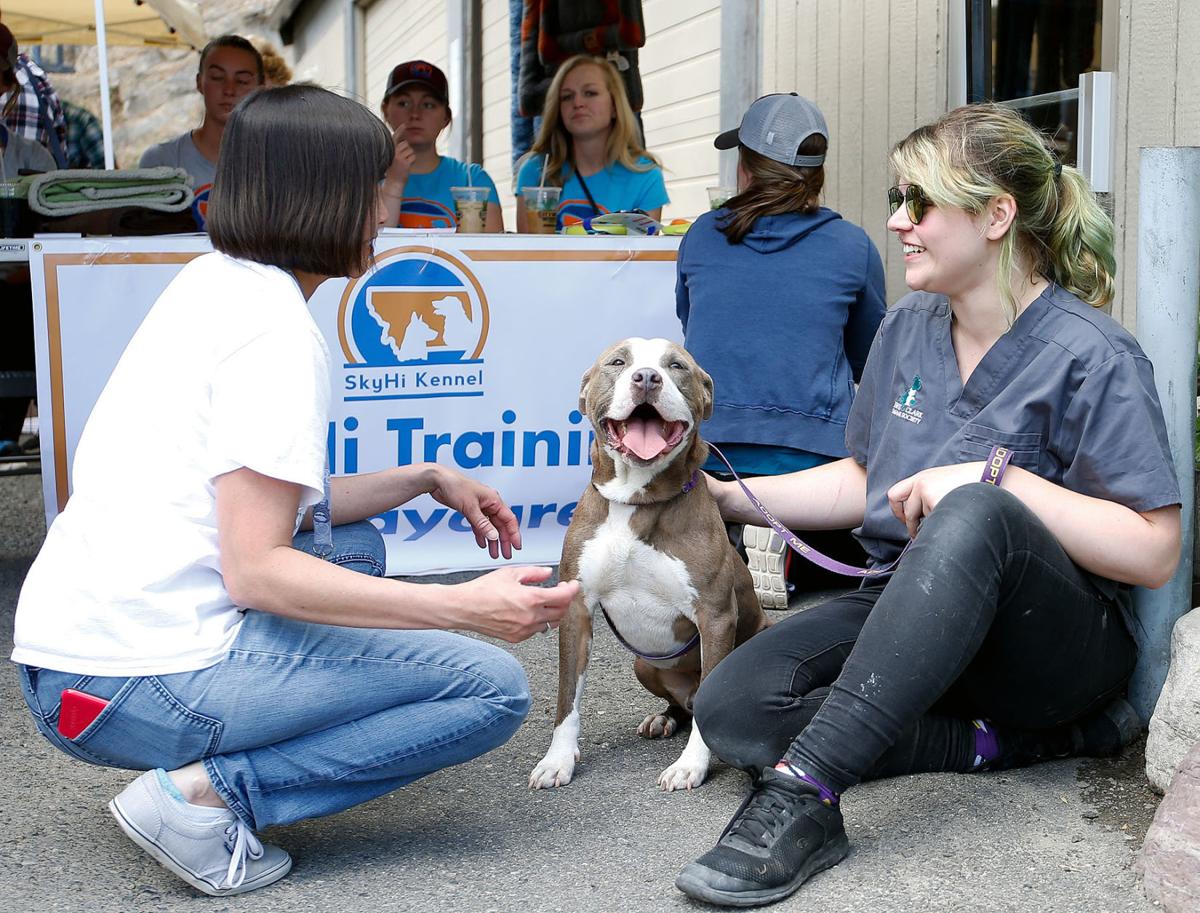 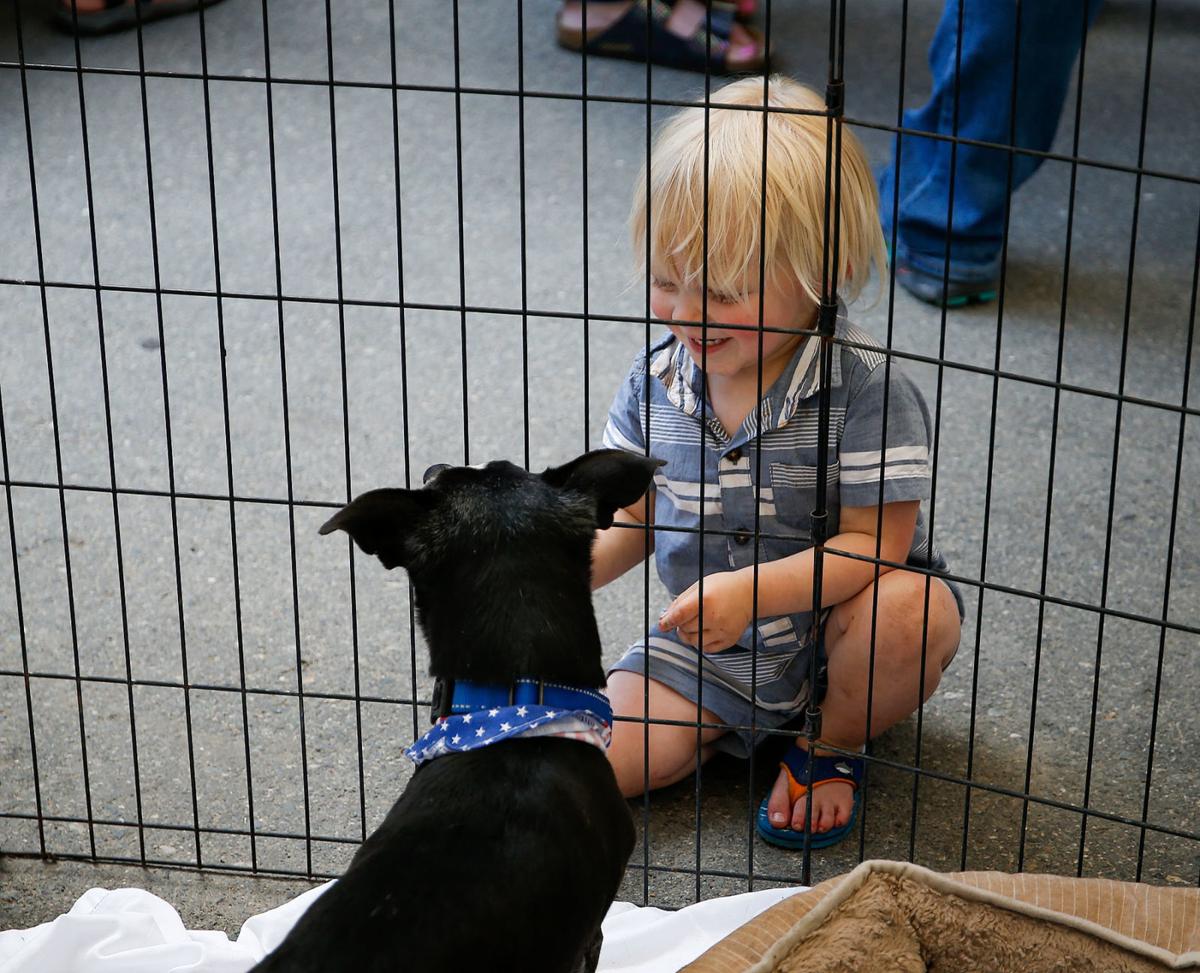 Davey Wright gets to know Isabell at the Blackfoot Brewery Saturday at the community day event celebrating the launch of New Best Friend Blonde Ale. All proceeds will go to the Lewis & Clark Humane Society. 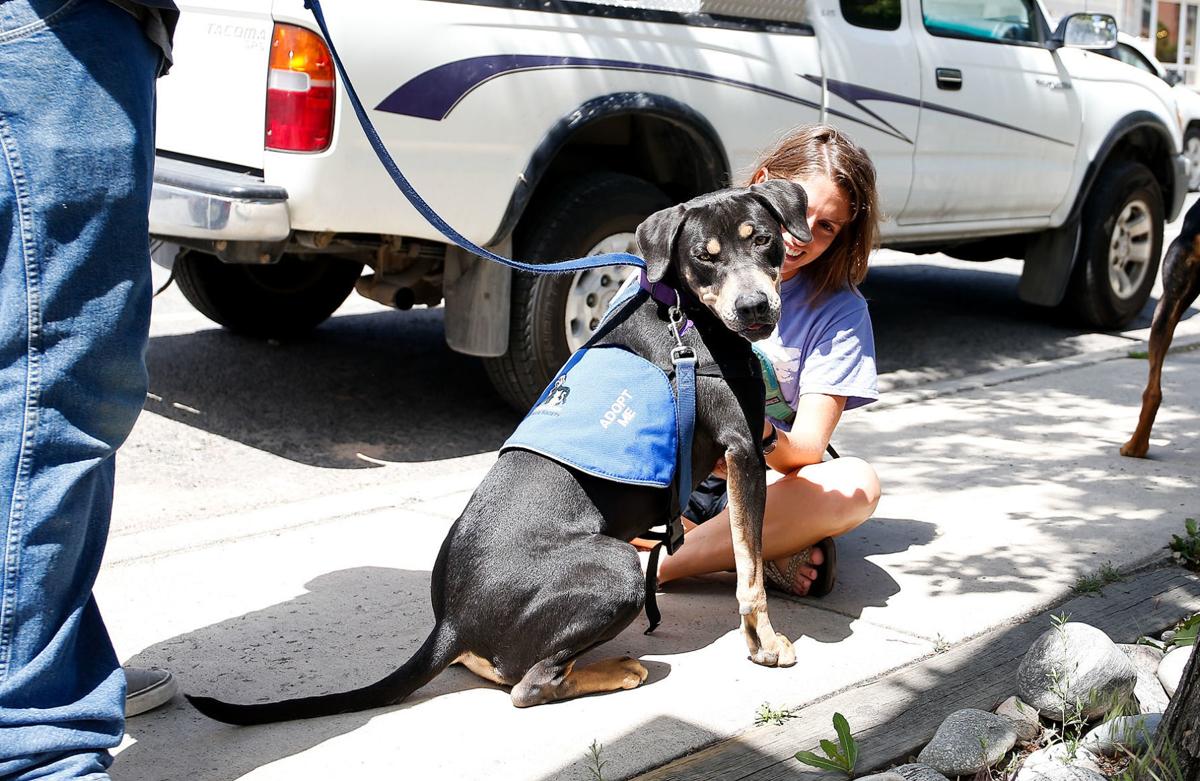 Nothing quite says summer like enjoying a cold beverage on a hot summer day with a furry best friend by your side.

On Saturday afternoon, Blackfoot River Brewing Company and Associated Dermatology teamed up to host a community partnership beer release and adoption event to support the Lewis & Clark Humane Society. The event served up a specially crafted beer, appropriately entitled New Best Friend Blonde Ale, and several dogs and cats looking for their forever home were on-site and available for adoption.

Blackfoot began their community partnership program a few years ago, which pairs a business and a nonprofit in brewing a special beer, with proceeds going to support the nonprofit. Each partnership is unique in its participants, beer style, celebration and community outreach.

“It’s a great way to connect with organizations and with other people,” said Bethany Flint, managing partner for Blackfoot River Brewing Company. “The program has really grown over the years.”

Flint explained that giving back to the community is an integral part of Blackfoot’s business culture.

“The founding partners of Blackfoot believe in three pieces to a successful business: producing great products, taking care of your staff and giving back to the community,” explained Flint. “The community supports us so we want to give back.”

Earlier this year, Flint approached the Lewis & Clark Humane Society about partnering on an event that would help animals in need. On June 1, representatives from the humane society and Associated Dermatology gathered at Blackfoot as guest brewers to assist in crafting the New Best Friend Blonde Ale in preparation for the community event. The experience was part educational, part work, and fun for all.

“It was really interesting,” said Kelsee Dalton Watts, executive director of the Lewis & Clark Humane Society, of the brewing experience. “I have a lot more respect now for where beer comes from. It was really cool to see how much thought and creativity goes into producing a special beer.”

“It was also really neat to see so many people who are passionate about dogs and beer together in one room,” added Dalton Watts.

Flint shared that the group chose a beer style that would be fun and enjoyable for most people. She explained that the New Best Friend Blonde Ale was made from a Montana-grown two-row malt, an English malt known as Maris Otter, and flaked oats.

“It has a little bit of a sweet, malty flavor with a fruity aroma from the blend of hops in it,” said Flint. “It’s a really good refreshing summer ale. It’s pretty light and has a low alcohol content of 5% so it’s appealing to lots of people.”

While Saturday’s event featured the debut of the New Best Friend Blonde Ale, perhaps the biggest crowd pleasers were the dogs and cats on-site and available for adoption. Among the animals were Copper, a lively hound who bellowed out cheerful cries to attendees, and two pit bulls named Jesse and Beemer who willingly snuggled up to anyone who caught their eye.

According to Dalton Watts, Saturday’s event was the first off-site adoption event for the Lewis & Clark Humane Society. Unlike a similar event held annually at PetSmart, people could actually adopt a dog or cat right at Blackfoot on Saturday.

“This type of event is nice because it allows us to showcase the animals off-site and draw on a new crowd,” said Dalton Watts. “Some people worry the humane society is a sad place and that it will be too hard to pick one animal.”

Offering support and additional services on Saturday for families of newly adopted pets were representatives from SkyHi Kennel that offers boarding, day care and training services. SkyHi offered 15% training class discount coupons to any event attendees, as well as 50% off training consults for people who adopted pets Saturday.

“There’s a lot of people who aren’t aware of their services,” said Dalton Watts of SkyHi. “But they help set up new adopters to be good and successful owners.”

Blackfoot’s community partner in Saturday’s event, Associated Dermatology, also took part in the festivities and offered expert advice about sun care for attendees and their pets, especially during the summer.

While the New Best Friend Blonde Ale debuted on Saturday, Flint shared that most of their beers stay on tap for two to three weeks. If you didn’t get a chance to stop by Saturday’s kickoff party and adoption event, there’s still time to give the new ale a try at Blackfoot. Also, Dalton Watts stressed that the humane society is especially full of animals looking for their forever homes right now and welcomes anyone interested to stop by and see if their new furry best friend is waiting for them.

“We absolutely cannot do the work we do without help from the community,” said Dalton Watts. “We rely heavily on the community for support and they always have our back. It means the world to us that Blackfoot thought of us and wanted to partner with us. We’re really, really grateful.”

On Saturday afternoon, Blackfoot River Brewing Company and Associated Dermatology teamed up to host a community partnership beer release and a…

The summer sun beamed down on a crowd of smiling teetering alongside their parents. Their faces bore brightly painted designs and many clutche…

Slicked back ponytails with large glittery bows, metallic poms, daring tosses and swift split jumps. In the background, the whoops and hollers…

Mushers, sled dogs brave cold as annual Race to the Sky kicks off in Lincoln

LINCOLN — Flanking both sides of the roped off starting area, the bundled-up crowd waited as their breath formed white clouds above them in th…

'An honor and a privilege': Wreaths Across America ceremony at Fort Harrison honors state's veterans

A damp chill hung in the air as people slowly filed into the humble white chapel. As the clock struck 10 a.m., there was a minute of silence b…

Davey Wright gets to know Isabell at the Blackfoot Brewery Saturday at the community day event celebrating the launch of New Best Friend Blonde Ale. All proceeds will go to the Lewis & Clark Humane Society.