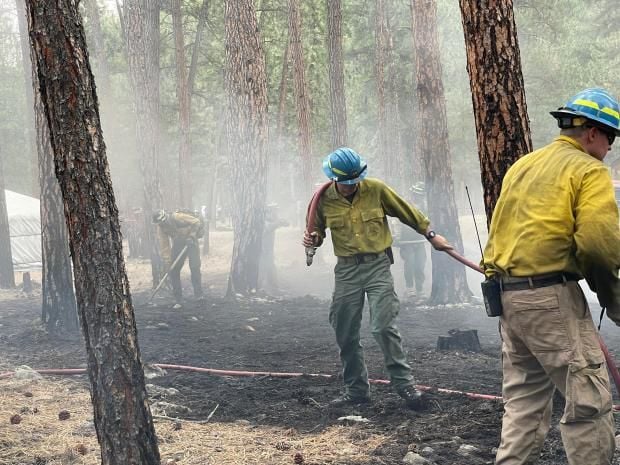 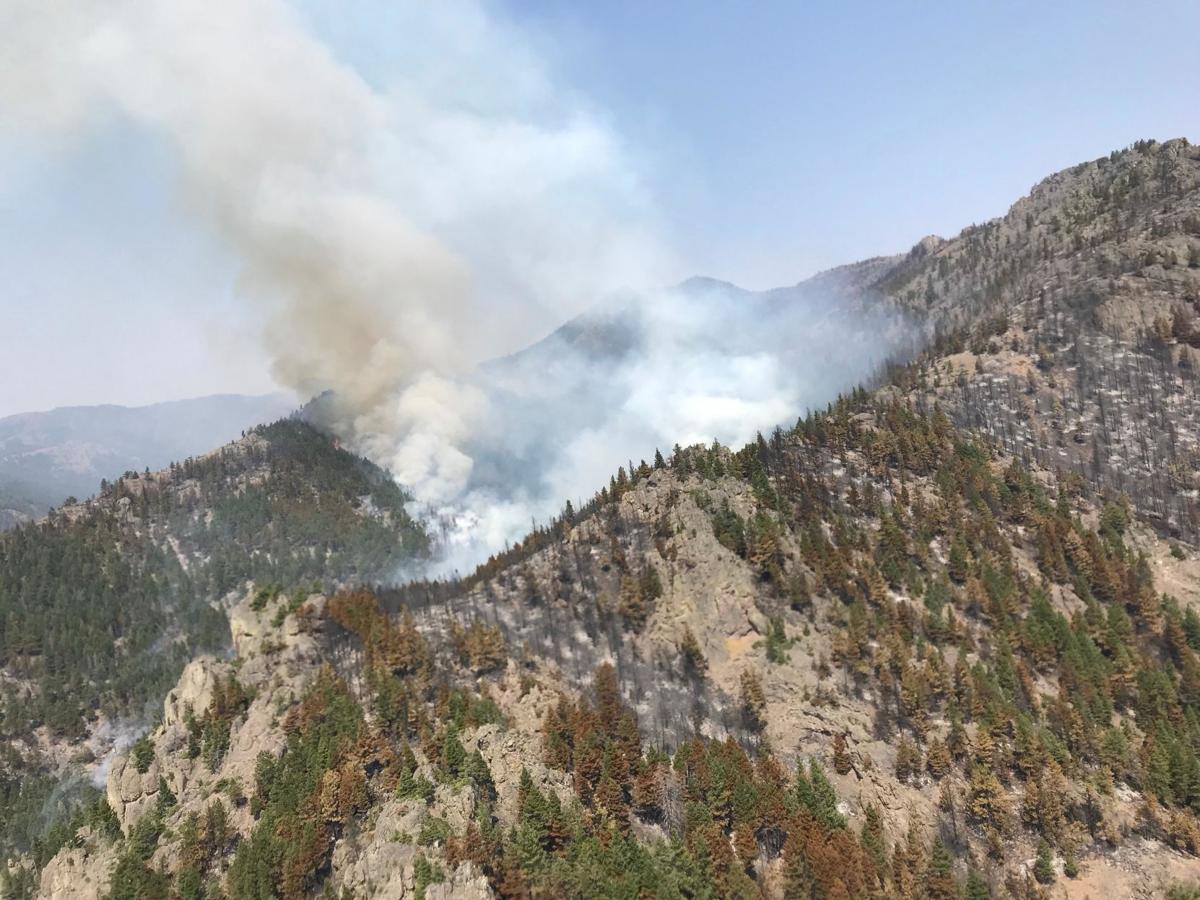 The Harris Mountain fire about 10 miles southeast of Cascade has now burned 31,591 acres and is 43% contained, officials said early Monday, adding there was little change in growth as fire activity was minimal due to cloud cover and rain.

They said fire activity was expected to be slightly less Monday with the 0.4 inch of rain received.

The fire was started by lightning on July 23. Oct. 1 is the estimated containment date. The governor's office said Tuesday the Harris Mountain Fire is the state's top priority fire.

Crews made good progress on the southern and western edges of the fire ahead of the Sunday afternoon storm. Firefighters built lines near Frank’s Ridge on the southern portion of the fire. On the western side, crews extinguished a heat area about 60 feet inside of the fire edge.

Crews on Monday planned to work in the west fork of Hound Creek and continue improving their line to the west. Removal of hoses, sprinklers and portable water reservoirs (pumpkins) from Sheep Creek will continue.

Crews working in the north near Harris Mountain will continue to monitor and patrol the fire as it slowly moves downslope.

Northern Rockies Team 7, a Type II incident management team, assumed command of the fire from the Montana Department of Natural Resources and Conservation on July 26.

Gov. Greg Gianforte's office said Tuesday there are 24 large fires in Montana and the Northern Rockies region is the No. 3 priority region in the nation.

Since Jan. 1, there have been over 1,930 fire starts in Montana burning around 624,000 acres, with over 140,000 acres burned since Aug. 3. Since the governor’s Aug. 3 fire briefing, there have been 129 new fire starts. Officials estimate nearly 48 residences have been lost so far this year and about 260 people are now displaced from their homes due to evacuation orders, down from over 600 last week, the governor's office said.

The largest fire in Montana is the Richard Spring Fire, at 62,954 acres and 0% containment.

Montana entered the fiscal year with the Fire Suppression Fund at its statutory maximum of roughly $105 million. Officials estimate that nearly $28.6 million from the fund has been spent fighting fire since the start of the state’s current fiscal year.

Here are updates at other area fires:

The Woods Creek fire, 16 miles northeast of Townsend, grew to 40,157 acres and was 3% contained, officials said Monday. It was started by lightning and discovered July 10 near Boulder Lakes in the Big Belt Mountains.

There are 431 personnel on the blaze.

The Meagher County Sheriff’s Office issued an evacuation notice Sunday for Grassy Mountain residents north of Highway 12. Due to severe storms Sunday, firefighters disengaged from the line to shelter in safe areas.

“Driven by an atypical east wind, the fire made a significant run to the west late on July 30 but was stopped short of homes and other structures in the Confederate Gulch area,” fire officials wrote on inciweb.nwcg.gov. “Firefighters have taken advantage of helicopters and air tankers assigned to the incident, including water drops on spot fires and retardant drops on critical resources in front of advancing fire.”

The Balsinger fire five miles west of Neihart is now at 8,614 acres and the Ellis fire is at 1,220 acres, officials said Monday. Containment was estimated at 45%. The fires started July 8. Balsinger was started by lightning and the cause of the Ellis fire, 2.5 miles southwest of Smith River, is under investigation.

The blazes are being managed together as the Divide Complex fire. No smoke has been seen from the Ellis Fire for the past few days, officials said.

Fires merge near White Sulphur Springs, some told to evacuate

The Needles Fire sparked Friday about 10 miles west of White Sulphur Springs and was human-caused.

Helena area gets 0.21 inches of rain in latest storm

The Helena Regional Airport received 0.21 inches of rain on Sunday, somewhat comparable to a drop in the bucket for what is needed to help the…

Owners in state of shock over loss of Dam Bar

A pile of rubble stood Monday where the Dam Bar used to be, following a fire Saturday that reportedly started in the kitchen in the late after…

The Woods Creek fire in the Big Belt Mountains 16 miles northeast of Townsend grew to 48,806 acres and was 38% contained, officials said early…

The Woods Creek fire 16 miles northeast of Townsend in the Big Belt Mountains was listed at 49,721 acres early Saturday, up from 48,806 the da…