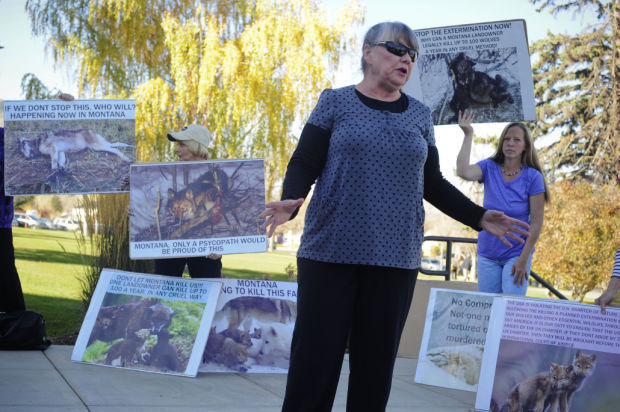 During a wolf policy protest at the Capitol Monday, Madison County resident Diane Nelson-Steiner alleges she witnessed wolves killed near her home along the Big Hole River. She recalled an entire pack of wolves shot by government officials flying a USDA plane, and seeing the animals left to rot. 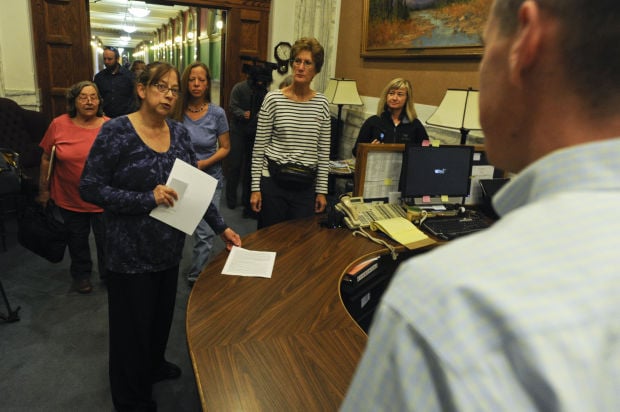 Karen Wells, of the Wolf and Wildlife Action Group, delivers a 'violation notice' to Gov. Steve Bullock's office Monday at the Capitol. 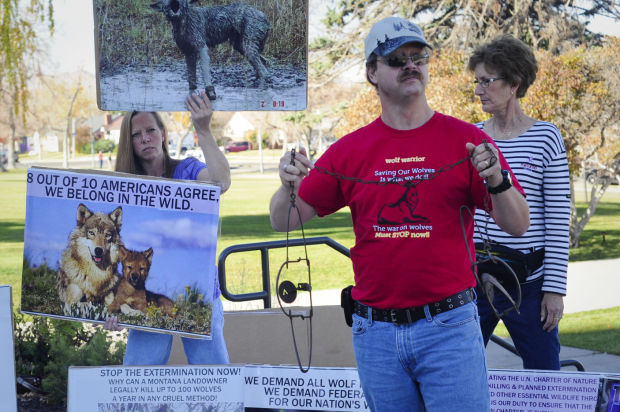 Tim Stiner holds up traps he believes were placed on his property illegally by trespassers.

Montana’s wolf policy allows for a landowner to kill up to 100 wolves, using what WWAG called cruel and barbaric methods such as aerial gunning and trapping, the violation notice said.

The policy is an attempt to exterminate the gray wolf, and WWAG demanded that wolves return to federal protection under the Endangered Species Act, said member Jeanne Rasmussen.

Bullock was not at his office at the time WWAG delivered the violation notice.

“They are being shot and trapped and gut shot, and they burn baby pups out of their dens,” Rasmussen said. “Hunters just want them eliminated.”

WWAG described itself as an “international grassroots organization” at the Capitol on behalf of 80 percent of Americans who want wolves protected.

Madison County resident Diane Nelson-Steiner spoke passionately about wolves killed near her home along the Big Hole River. She recalled an entire pack shot by government officials flying a USDA plane, and seeing the animals left to rot.

“To see those wolves killed and laying in a field is horrible,” Nelson-Steiner said. “They killed most of the Big Hole pack, and since then we’ve been overrun with elk and deer. It’s getting absolutely ridiculous with the herds getting to be overly large.”

Wolves also kept coyote numbers in check, which have increased dramatically since elimination of the wolf pack, she said.

Nelson-Steiner and her husband, Tim Steiner, brought several foothold traps they said were found illegally set on their property by trappers after wolves. They have found or heard of multiple animals caught in traps including domestic cats and dogs, an eagle, a badger and coyotes, but no wolves, Steiner said.

“Yes that’s cruel and inhumane,” Steiner said while holding a trap. “Animal cruelty is against the law in all 50 states. It’s not just wolves they’re catching; it’s everything else.”

“Why are these psychopaths allowed to torture animals in this country, yet 86 other countries have banned trapping?” asked WWAG member Michelle Domeier.

The group held posters showing wolves dead in both foothold traps and snares identified as legal means of killing wolves in Montana. More than 2,600 wolves had been killed since being stripped from federal protections, they said.

After speaking on the Capitol steps, WWAG member Karen Wells delivered the violation notice to the governor’s office, which was taken by staff in Bullock’s absence.

“Montana has a highly-effective wolf management plan, developed through collaboration with stakeholders and based on scientific principles and thorough research,” said Kevin O’Brien, Bullock’s deputy chief of staff, in an email. “While some on the far left and far right may take issue with the management plan, it has resulted in healthy wolf populations in Montana.”

Within the violation notice, WAGG made the following statement:

“One Montana landowner deems a wolf a 'problem' wolf (and) they can legally kill it, and may 'legally' kill up to 100 Wolves in any cruel method, including cruel and barbaric leg hold traps and snares, poisoning, gassing and burning alive pups in their dens, stomping, clubbing, gut shooting, chasing down and shooting from the air, with no restrictions or quotas. In addition, wolf 'hunting' and trapping is allowed from Oct. to May.”

That statement contains several inaccuracies in reference to seasons and new regulations for landowners, said FWP spokesman Tom Palmer. Hunting and foothold traps are legal methods of take, while other methods are prohibited by hunters or trappers, he said.

Landowners also do not have special regulations allowing aerial shooting, he said.

The Fish and Wildlife Commission approved rules that allow up to 100 wolves per landowner, authorized at 25 at a time, he said. Landowners have harvested four wolves under the rules, he said, and baiting is not allowed either in hunting or trapping.

“They (wolves) have to be actively threatening you or your livestock,” Palmer said. “The chances of a landowner seeing a threat and setting out a trap immediately is almost nill.”

When told of FWP’s response, Nelson-Steiner insisted that the regulations allow landowners to use “any” means of killing wolves.

Violations of existing regulations have run rampant, and FWP and the sheriff’s office have failed to enforce state laws in her area, Nelson-Steiner said.

On the issue of international law, Bullock was in direct violation of several items within the UN’s charter, Wells said.

Protesters decry killing of wolves and bison in Montana

Montana Fish, Wildlife and Parks is seeking comment on proposed new rules that outline how to establish and offer a voluntary wolf management …

Sage grouse and wolves topic of Fish and Wildlife Commission

A U.S. appeals court on Friday lifted protections that kept gray wolves an endangered species in Wyoming for years after federal officials rem…

During a wolf policy protest at the Capitol Monday, Madison County resident Diane Nelson-Steiner alleges she witnessed wolves killed near her home along the Big Hole River. She recalled an entire pack of wolves shot by government officials flying a USDA plane, and seeing the animals left to rot.

Karen Wells, of the Wolf and Wildlife Action Group, delivers a 'violation notice' to Gov. Steve Bullock's office Monday at the Capitol.

Tim Stiner holds up traps he believes were placed on his property illegally by trespassers.