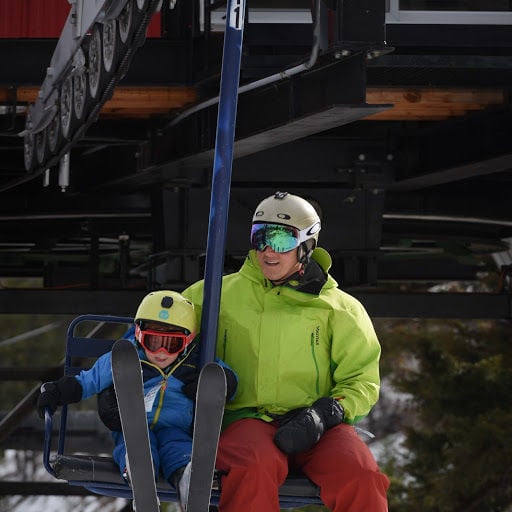 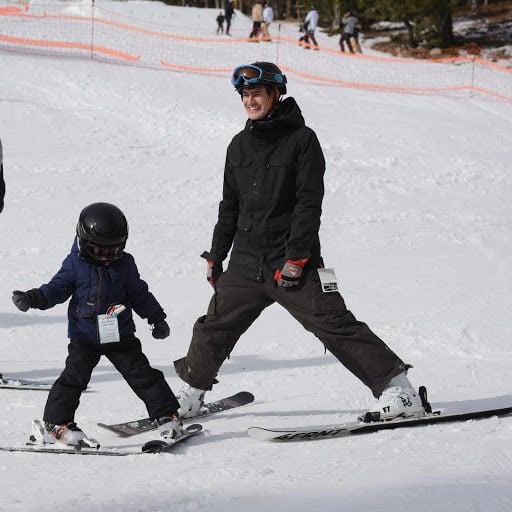 A beginner making some turns as an instructor looks on at the Great Divide Ski Area on opening day.  Sarah Mosquera, for the Independent Record.

The sky was overcast with strips of blue running through it. Temperatures hovered at the 40-degree mark with barely a breath of wind. At the stroke of 9:30 a.m. the chairlift kicked into gear to cheers from the crowd and began its steady crawl up the mountain.

“Saturday, November 9 baby,” shouted one snowboarder on his way to the chairlift. “This is one for the books.”

On Saturday, Great Divide Ski Area upheld its reputation for being the first ski hill in Montana to open for the season. The hill beat their previously earliest opening date by one day this year.

“It is so good to see so many people up here for the first day,” said Sandra Moore, a skier from Helena. “They (Great Divide) open early each year because of us, not because of them, and that’s pretty amazing.”

“Being the first one up on a chair at a ski hill in Montana feels really good,” said Shawn Lashway, a Helena skier.

Thanks to the early cold and snow this fall, the staff began making snow on Oct. 26. According to Kevin Taylor, Great Divide owner, the hill has received approximately 55 inches of snow since late September.

“It’s astounding,” said Taylor. “The early snow and cold temperatures helped to cool the ground and get it wet, which made it easier for the snow we’ve made to start accumulating.”

“The snow was perfect,” said Lashway after finishing up a morning run on the hill. “It was like little balls of cotton.”

For the opening weekend, Great Divide had the Good Luck Chairlift operating on the lower mountain as well as the backyard towrope for beginners and kids who wanted to avoid the crowds.

Despite the limited lifts and trails open, Taylor shared that people from as far away as Salt Lake City, Seattle, and Boise had contacted him earlier in the week about opening weekend.

“I reiterated to them that there’s only one lift, one run open this weekend, but they were planning on coming anyways,” said Taylor.

Great Divide’s long-standing popularity with Montanans and others stems from its proximity to Helena, abundant terrain parks, affordable lift tickets, and the ratio of skiable terrain to the number of skiers.

“There’s a lot of room to roam,” said Taylor.

“We’re really expanding our reach with this offering,” said Taylor.

New to the hill this year is a 200-acre parcel of expert terrain in the Tall Timbers area on Great Divide’s southeastern edge.

This expansion is just the beginning of some larger plans Taylor has for the ski hill. In August, it was announced that Great Divide has plans to build two new chairlifts by 2022. Construction on the Summit Shuttle chairlift will begin this coming summer, which will increase the capacity on busy days for skiers and snowboarders to access the summit and provide quicker access to the western side of the resort, served by the Wild West chair lift.

But Taylor admits that they will continue monitoring the needs of the resort throughout the season to best determine their direction for next year.

“If other areas of the hill show more strain this year than on the lifts, we might have to adjust our priorities,” said Taylor. “We’ll have a better answer by February.”

When Taylor assumed ownership of Great Divide in 1985, the ski area had 12 trails, a small lodge building and a T-bar. Today, the hill has grown to include five chairlifts servicing over 110 runs.

Taylor attributes much of the success of Great Divide to the staff that work alongside him.

“I work with a great bunch of people,” said Taylor of his staff. “We have an about 80 percent retention of employees, which is pretty outstanding for seasonal work.”

And after three decades of owning and operating Great Divide, Taylor still finds joy in his work on the hill.

“No one gets into this for the dollars and cents,” said Taylor. “It’s a fun thing to do for the Helena skiing community.”

As Great Divide’s opening day progressed, the parking lot continued to fill and not a single chair on the Good Luck lift was vacant as it made its way to the top.

“It’s a beautiful day and it’s only going to get better,” said Moore.

“I like seeing the kids and families enjoying recreating together,” said Taylor. “The old and young can participate in this sport together, which is a pretty cool thing.”

The Helena City Commission voted this week to advance a proposal to extend the Downtown Urban Renewal District to include the area of Rodney Street.

U.S. Sen. Jon Tester says he would like to see advocates for those with disabilities have a bigger voice in shaping policy.

In Montana, 11 high hazard dams are in poor condition

UPDATE: Overdue hunters have been found

Three overdue hunters have been found.

A beginner making some turns as an instructor looks on at the Great Divide Ski Area on opening day.  Sarah Mosquera, for the Independent Record.