Helena’s trolley is back.

The dark red and cream colored people mover will operate for free beginning Monday, July 29, through Saturday, Aug. 31, on a trial run to evaluate how much the public will utilize the courtesy shuttle.

“The trolley exemplifies the city’s framework of services and programs to be responsive to the business community,” wrote City Manager Ana Cortez via email. “It’s starting as a pilot to determine the level of impact it will have on our city, residents and business owners."

The trolley was in operation from the 1900s to the mid-2000s. This is the same trolley that was in the Trolley to Trails and then the Trail Rider program.

“Initially, it was purchased with special federal funding for Americana type vehicles," said Elroy Golemon, City of Helena transit superintendent. “It was retired when the economy went into a depression.”

The trolley program is funded by the city. The city commission allocated $50,000 for downtown and $30,000 for transit projects. From each of those funds, $15,000 will be allocated to pay $30,000 for the month-long test run. Operation costs include maintenance, fuel, employee wages and administrative fees. Golemon estimates the cost of running the trolley to be $75 an hour for 10 hours a day.

“In the current budget, the city has the ability to recognize a fund balance and allocate funds to projects like the trolley or downtown murals,” Cortez wrote. “This is why it is important to recognize that not every dollar is equal. A general fund dollar is different from reserve and other fund money, and funds separate from the general fund give us the opportunity to put money towards our initiatives such as the trolley.”

The vehicle is gas-powered, and while the body resembles a railroad trolley, it travels city streets on tires. Capital Transit staff will drive the vehicle.

“Staff will be rotated, so they all get the experience,” Golemon said.

They also get to share with riders bits of Helena history. “You just never know,” Golemon said, “if it’s real history or made up history.”

The trolley has been in reserve at City Transit and used as a regular bus as needed, and by the Helena Business Improvement District. Through the BID, the public is able to lease it out for special events. It has been used occasionally for wedding parties.

Throughout August, the trolley will not be available for rent. Instead, the public will be able to get on and off the vehicle at various locations around town.

“It’s going to service parks, nice places to eat and fun places to shop,” Golemon said. “On Saturday, the loop will include Helena Avenue, which used to be on one of the original trolley lines and went from the depot to Last Chance Gulch. It’s the only trolley that goes by all the breweries and most of the best places in town to eat.” 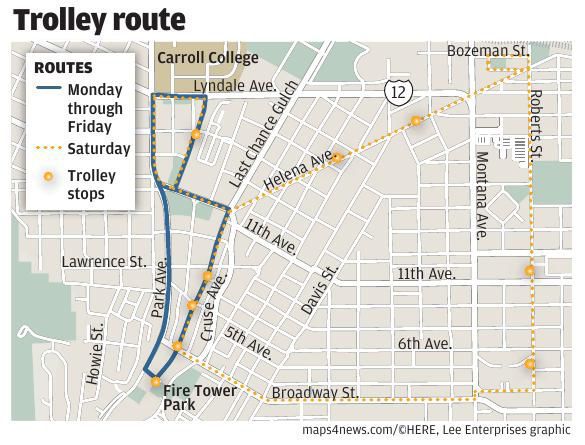 One of the stops is near the Lewis & Clark Library and Anchor Park downtown.

"The library looks forward to any improvements in public transportation and welcomes the chance to serve more patrons who may be inclined to use a trolley service to get downtown," said John Finn, Lewis & Clark Library director.

Schedules also will allow for the trolley to be alternate transportation to and from Alive at Five and the Saturday Farmers’ Market.

Two routes are available for the public and tourists to utilize. Monday through Friday, the trolley will run through the downtown district, which includes Park, Benton, Lyndale and Neil avenues, as well as Last Chance Gulch. Points of collection are distributed throughout the route and will be serviced from 10 a.m. to 9 p.m. It takes about 30 minutes to drive this loop and the trolley will make two loops per hour.

On Saturday, the second route will offer a larger downtown footprint spanning Last Chance Gulch, North Roberts, Helena, Lyndale and Benton Avenues. Saturday’s route operates 10 a.m. to 1:30 p.m. and 2:30 p.m. to 9 p.m. and commemorates the route the trolley operated in the 1800s. This route takes about 45 minutes, which allows for about one and a half loops per hour.

The trolley is ADA accessible, no fare is required, passenger collection can only happen on the passenger (right) side of trolley, and children under 10 must be accompanied by an adult. Users can safely alert the driver that they want off in between destinations by communicating while the bus is stopped.

The success of the program lies with the public. Drivers will be taking a daily head count and asking passengers to fill out a comment card regarding future use. The city also will utilize #helenatrolley to track community interest.

Walk into Keeping it Green any Saturday and embrace the feeling of warm plant hugs all around.

“I scream, you scream, we all scream for ice cream” tiny voices sang out in the parking lot at Child’s Play Preschool on Thursday morning as t…

Helena vigil about love and acceptance for all humans

The Lewis and Clark Humane Society is raising funds after taking in 11 dogs that were malnourished and covered with lice.

Learn to set sail with new business venture near Helena

A passion for the wind and water set sail on a new business venture near Helena. 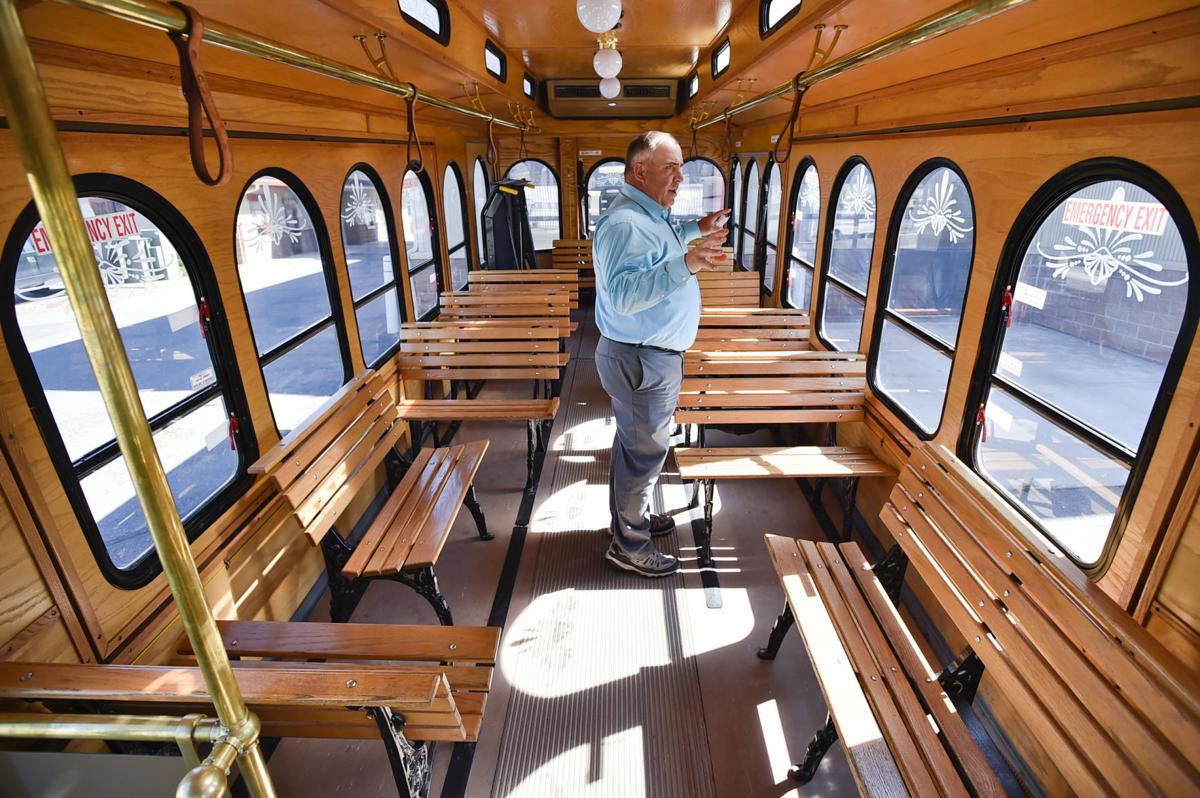 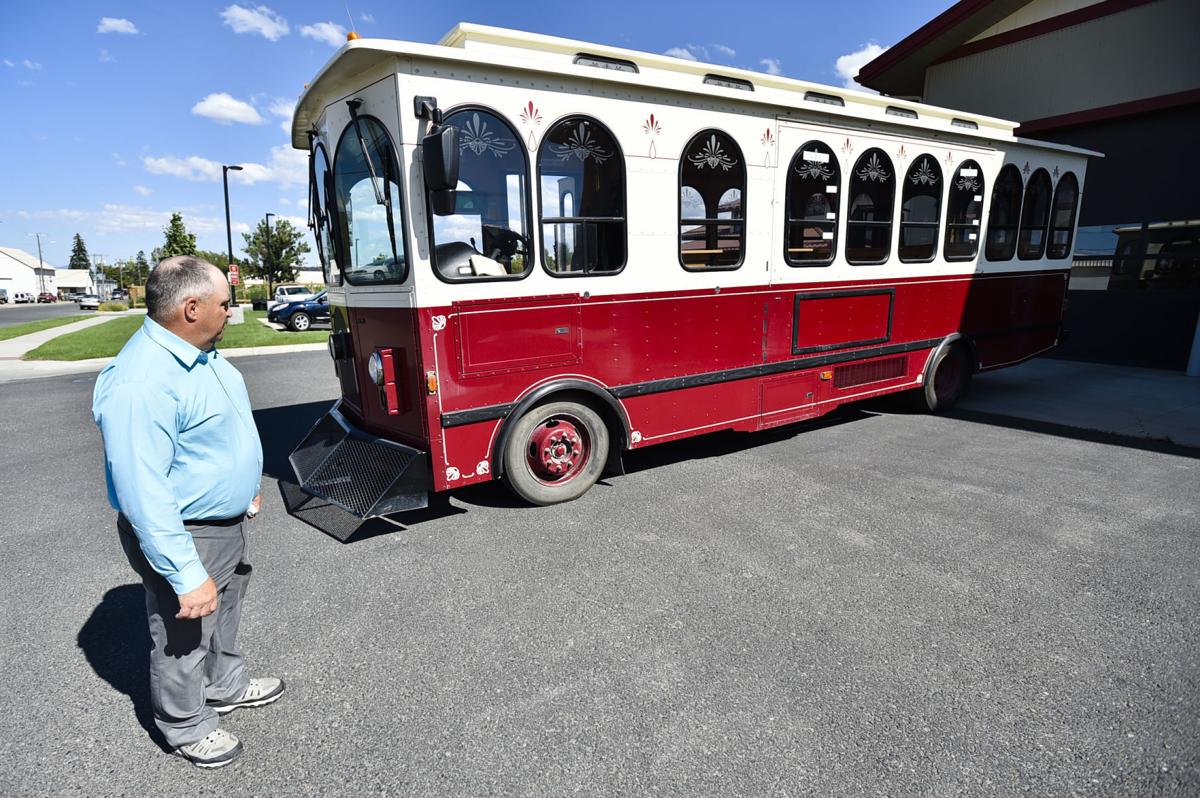 The trolley was in operation from the 1900s to the mid-2000s. This is the same trolley that was in the Trolley to Trails and then the Trail Rider program.